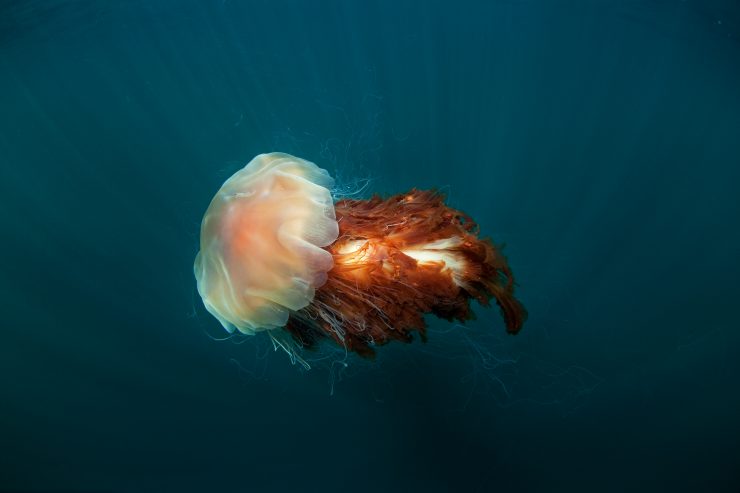 The lion’s mane jellyfish, scientifically known as Cyanea capillata, is one of the largest species of jellyfish in the world. Other names for this massive breed are the hair jelly, the arctic red jellyfish, and the giant jellyfish.

Regardless of the name, there’s no doubt this massive jellyfish is the true king of the sea. Since they can glow in the dark, the lion’s mane jellyfish may be one of the prettiest too. 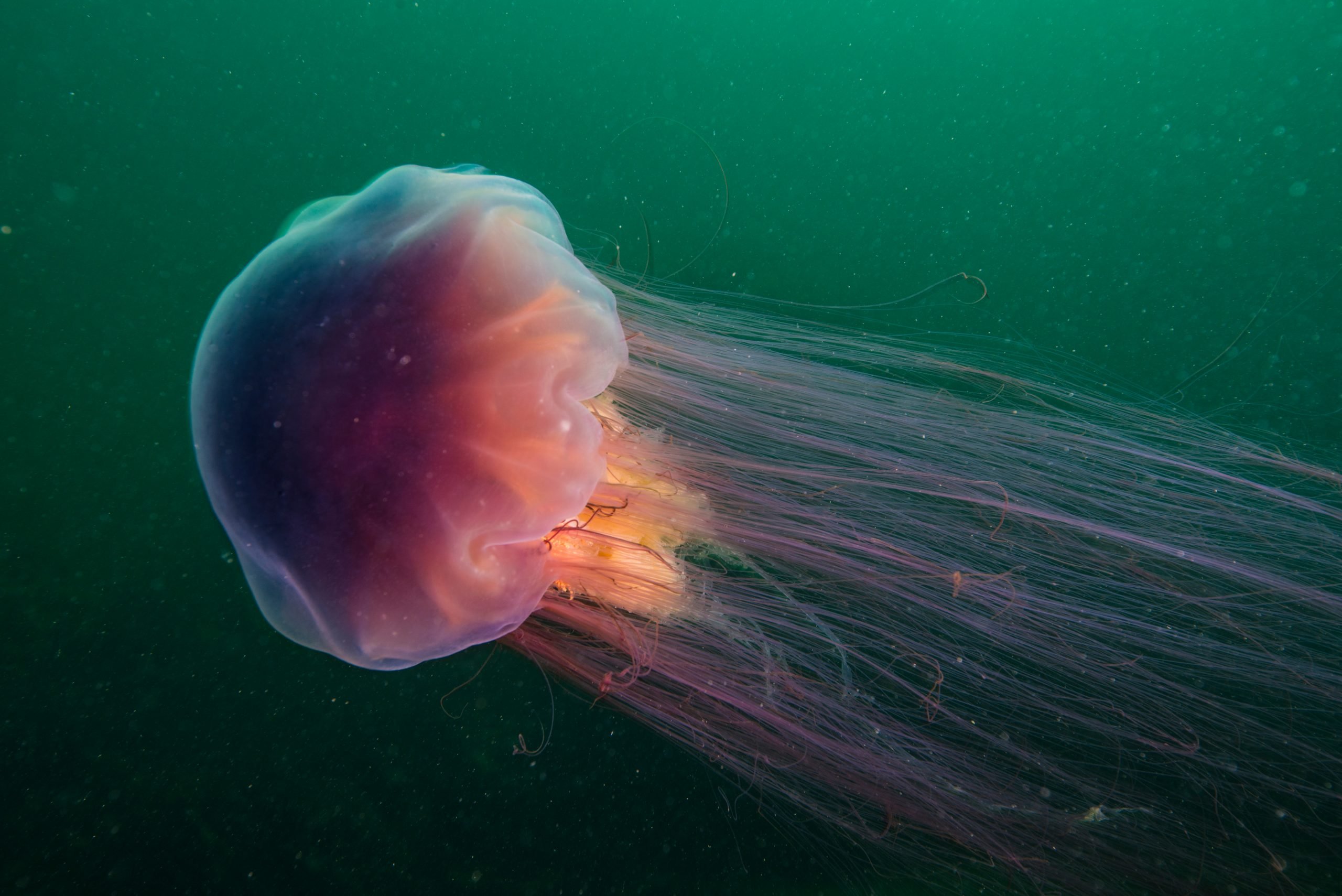 Lion’s mane jellyfish range in size, depending on their location. Species living in lower latitudes are a smaller size than those in the north.

Because lion’s mane jellyfish is one of the largest in the world, it makes sense that these creatures, although made up of 95% water, can weigh up to 200 pounds.

The length of a lion’s mane jellyfish’s tentacles can vary between 30 to 120 feet. The warmer the climate, the smaller they grow. The bell can vary from smaller than an inch up to almost ten feet.

Lion’s mane jellyfish have a bell-shaped body with flowing tentacles dangling from the underside. Eight clusters, arranged in four rows, surround the jellyfish’s mouth, which is on the bell’s bottom.

Each cluster, or lobe, contains up to 150 tentacles a piece. That means one lion’s mane jellyfish can have up to 1,200 individual tentacles that can grow up to lengths over 100 feet. Each lobe also contains a rhopalium or balance organ. There are also wide oral arms that extend out of the mouth.

Now, each tentacle – or appendage – has nematocysts that contain potent neurotoxins that can be harmful to humans. These same nematocysts cover the oral arms.

The top of the bell is usually red or dark yellow with a thick center that thins as it gets closer to the edge. Tentacles are typically yellow or red with purple oral arms. Similar poisonous nematocysts protect the upper portion of the bell.

Smaller jellyfish with a bell size less than 5″ are usually yellow or pink. Those between 5″ and 18″ are more of a red or yellowish-brown. Once they grow over 18″ they end up a dark brownish-red. 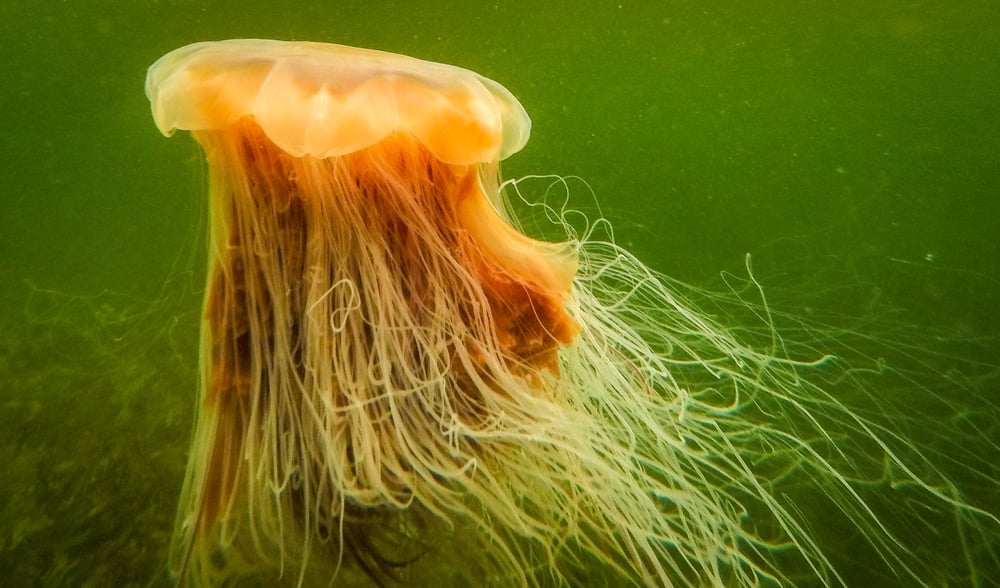 Lion’s mane jellyfish go through four life stages. They start as larva. Then they transform into a polyp, and then they go into the ephyrae stage, and finally the medusa. This jellyfish species has a very short life span of one year.

When an adult female reaches the medusa stage, she’s ready for sexual reproduction. This jellyfish species usually breeds in March and then in early May through external fertilization.

After the eggs get fertilized, the female lion mane will transport these in her tentacles until the eggs form into larvae.

Once the larvae are old enough, the mother leaves them behind on a hard surface to become polyps. During the polyps stage, lion mane jellyfish (along with many other species) reproduce asexually.

Each polyp produces stacks of ephyrae during this phase. Then each of these ephyrae breaks away from the group and enters the final life stage – medusa. At this point, they are full-grown and ready to reproduce sexually. The process typically takes 30 to 40 days. 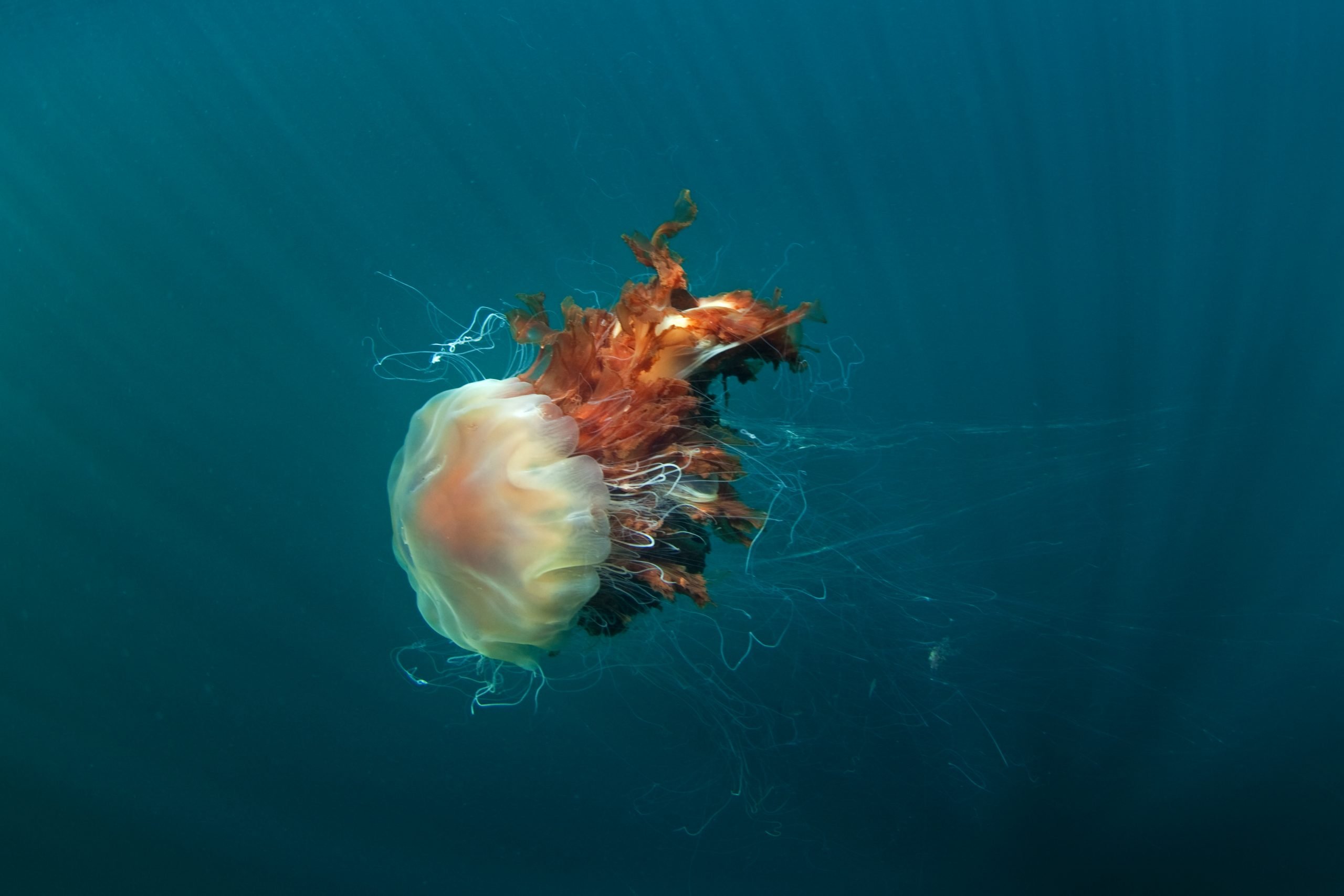 Where Does the Lion’s Mane Jellyfish live?

This jellyfish species prefers colder waters in regions where there are harsh, frigid winters and cool summers. They do best in waters colder than 68°F since they don’t do well when it’s warm.

They prefer to float near the surface in open waters throughout their adult lives, but they end their days settled in shallow bays. They rarely go below 66 feet deep.

The largest concentrations of lion’s mane jellyfish are in the colder parts of the Arctic, northern parts of the Pacific and Atlantic oceans. Occasionally, they migrate into southwestern areas of the Baltic Sea.

Outlying populations are sometimes spotted in the Chesapeake Bay during the winter. But these do not get as large as those that live out in the middle of the ocean. There have been sightings of these giant jellyfish in large bays along the east coast below 42°N.

This species is also commonly seen in the North and Irish Seas, the English Channel, and in some parts of Scandinavia as far south as Kattegat and Øresund.

Lion’s mane jellyfish are always on the move, usually alone rather than in swarms. They can cover large distances when there’s strong moving water. During storms or tides, these jellyfish may swim together in large groups. 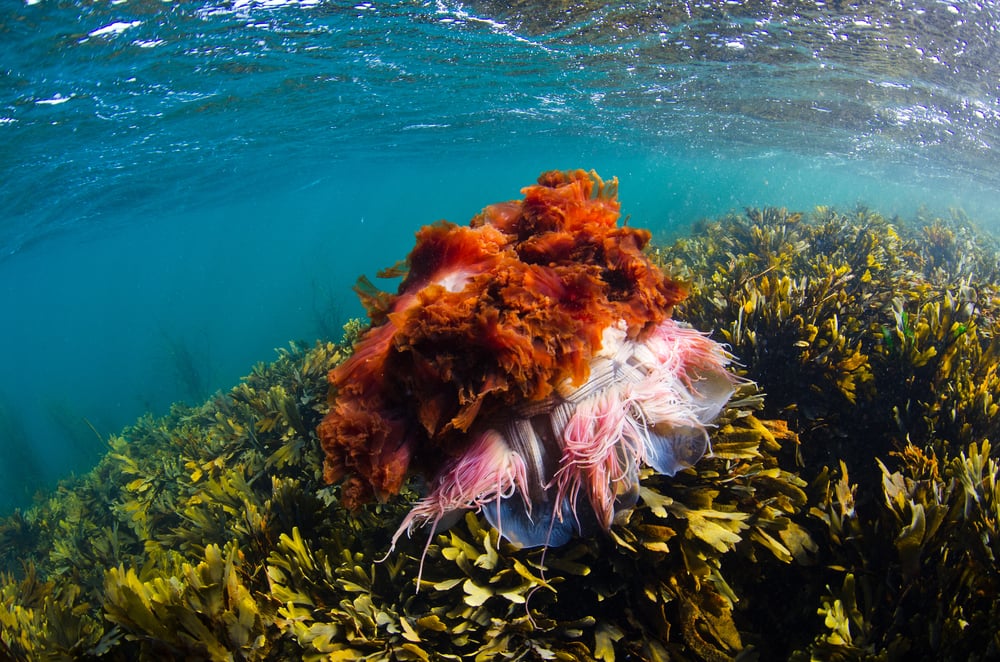 What Does the Lion’s Mane Jellyfish eat?

A lion’s mane jellyfish has a limited diet that consists of small fish, other smaller jellyfish, ctenophores, zooplankton, crustaceans, and moon jellies.

This species is bioluminescent, which means they can glow in the dark. The glow can lure prey close enough for the jellyfish to reach out and grab them with their extra sticky tentacles and poisonous stingers to catch these small prey. Their stingers cause the prey to become stunned once the tentacles wrap around them.

However, out in the open water, some species of food seek shelter under a jellyfish’s bell. Medusafish, shrimp, juvenile prowfish, butterfish, and harvestfish provide food and protection from other predators. 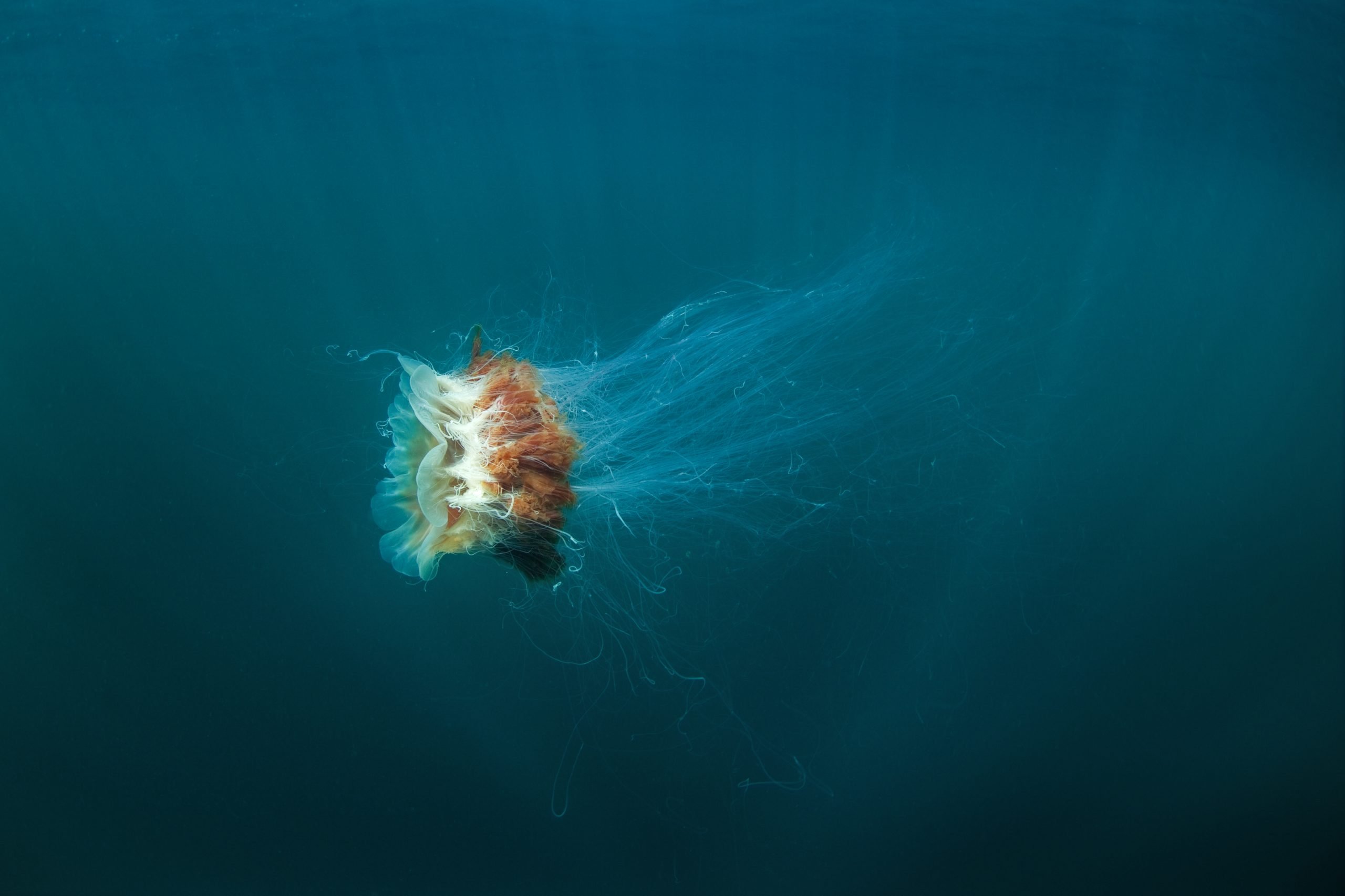 Smaller, young lion’s mane jellyfish are more likely to fall victim to being eaten by larger prey. Once these jellyfish reach adulthood, it becomes much more difficult for other species to eat them.

Their large size and poisonous stingers protect them from attacks and turn their predators into prey. One of the few animals that can eat an adult would be anemones, which also feed on juveniles.

Thankfully, most people won’t encounter these jellyfish, and if they do, they won’t be as large. Because they live in the open water, there’s less interference in their lives from humans.

Research suggests that these jellyfish do quite well in environments where there are human activities. Overfishing helps remove more of their competition for food, allowing them to grow bigger and multiply easier.

Climate change has not negatively impacted the lion’s mane jellyfish population. Global warming, climate change, and pollution have actually allowed for more jellyfish swarms because there are fewer predators or competition but plenty of food.

Common predators of the lion’s mane jellyfish include other jellyfish, ocean sunfish, seabirds, and sea turtles, primarily Leatherbacks who have a strong preference for their taste and make jellyfish their sole source of food during summer.

All jellyfish, including the lion’s mane species, have little to no other threats, as their size, poison, and short life span allow them to dominate their environment. 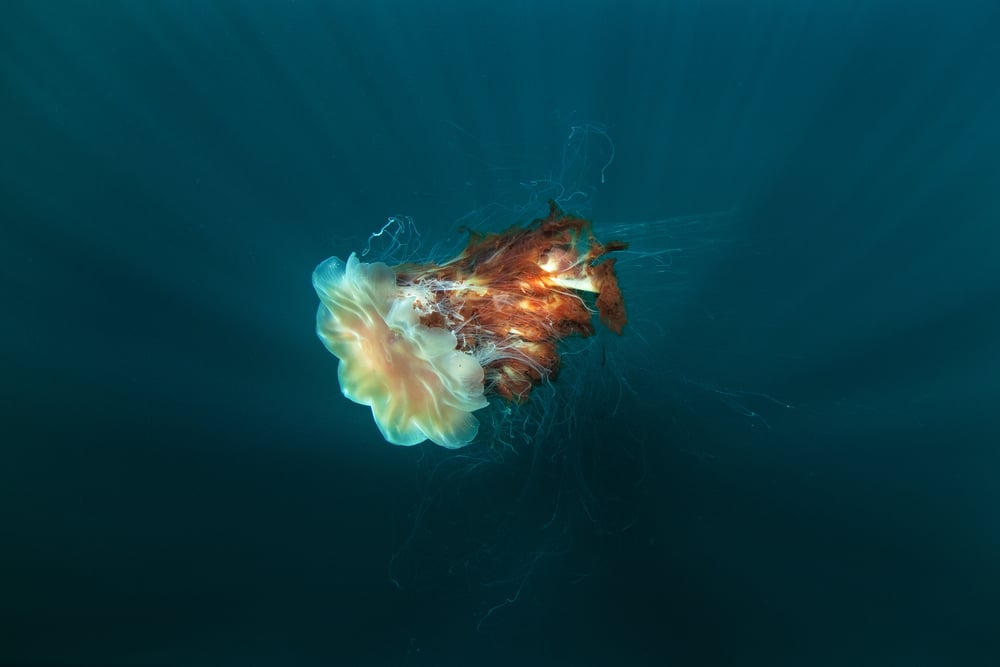 The lion’s mane jellyfish has a common conservation status, which means they are an abundant species found in multiple locations. They are not currently in danger of extinction.