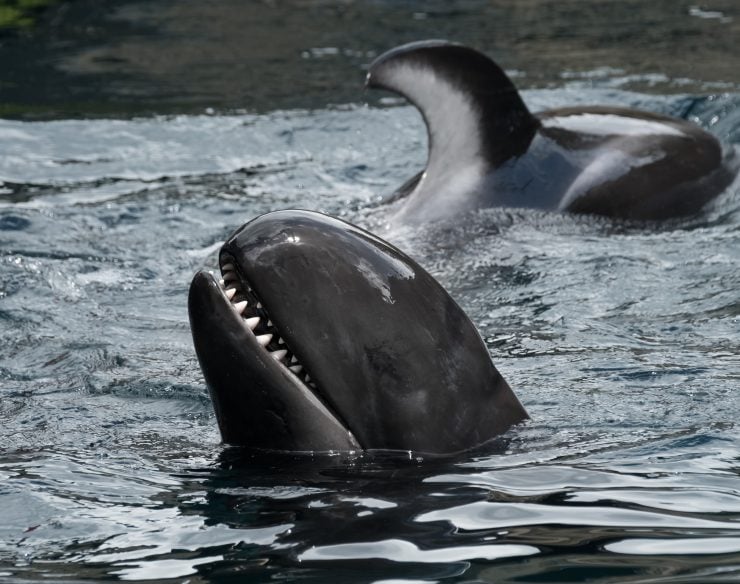 This naturally rare dolphin species is commonly found in open waters and warm climates, particularly near the Hawaiian islands. Because of their deep-diving preference, some facts about the migratory and behavioral habits of false killer whales are still a mystery to scientists. 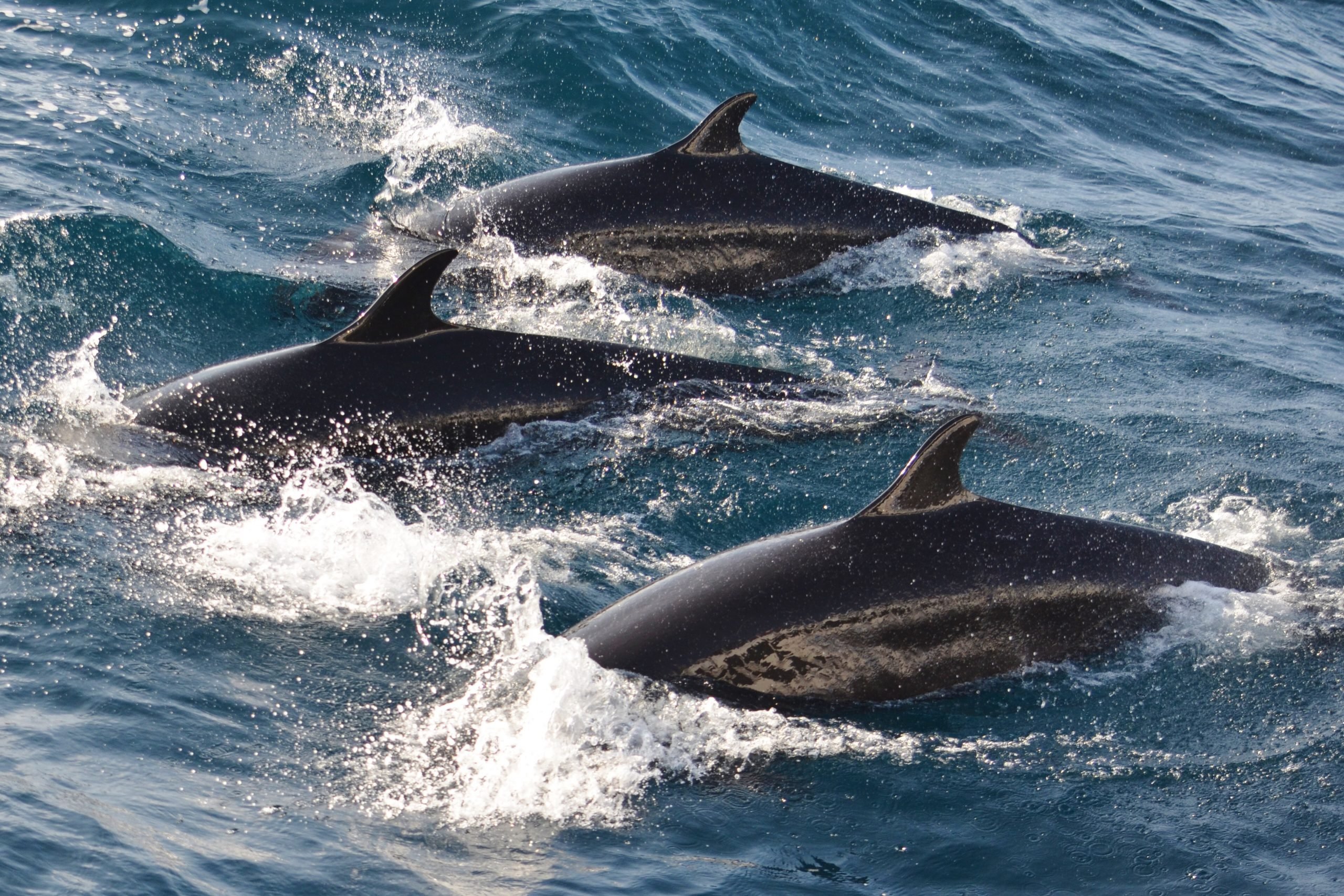 False killer whales are easy to identify by their long, sleek, black, or dark gray-colored bodies. They have distinctive narrow heads with a rounded, overhanging snout and no pronounced beak. False killer whales are recognizable by a small, tapered dorsal fin in the center of their backs. The false killer whale also has curved pectoral flippers that create an “s” shaped curve near their bodies.

The false killer whale has cone-shaped teeth with 14-21 teeth in the upper jaw and 16-24 in the lower jaw.

The gestation period for false killer whales lasts between 15  to 16 months. The calves are born at around 6 to 6.5 feet in length. They remain with their mother, feeding on her milk, for up to two years. A mother false killer whale may only birth a calf every 6 – 7 years before entering a menopausal phase at around 44 years of age. These older females remain within the pod group, helping to care for younger calves. 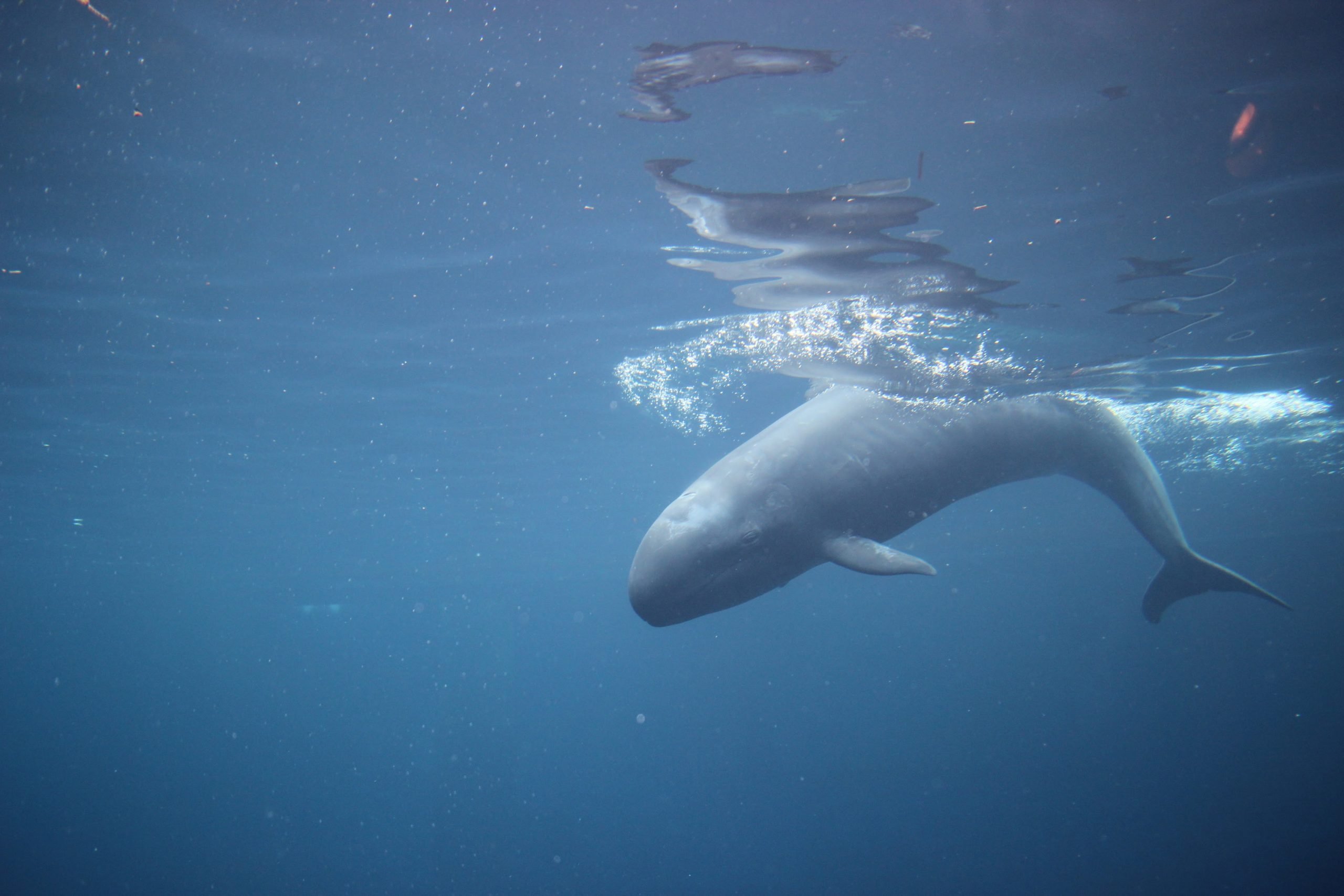 Where does the False Killer Whale live?

This relatively shallow dwelling pod is now declining but has been a vital source for much of researchers’ scientific knowledge on the species.

They have also been spotted offshore near Mexico, Costa Rica, and Japan. False killer whales are deep-diving dolphins and can be found at a maximum depth of 15,000 ft (4,700 m). People have spotted false killer whales further north and south but typically remain in deep-ocean, tropical waters.

False killer whales can form large pods of up to 500 individuals and break off into smaller pods of 15 – 25. Like other species of dolphins, these creatures often form strong, family-like social bonds with other individuals in their pods, as well as with dolphins of different species. They are known to interact non-aggressively with bottlenose dolphins and pilot whales.

What does the False Killer Whale eat?

False killer whales typically feed on squid and fish. They eat five percent of their own body weight daily. They are also known to feed on other, smaller dolphins, which can sometimes include their own species.

When available, they may also feed on larger prey such as humpback whales, juvenile sharks, and sperm whales, although scientists cannot know whether they eat them or are cutting down the competition.

False killer whales work together with their pods to hunt for squid and fish. They are partial to large fish native to the tropical waters offshore Hawaii, such as tuna, mahi-mahi, sailfish, and wahoo. The pods hunt and forage collaboratively and share their prey. Food is shared among one another, and false killer whales have even been known to offer a bite to humans whom they see fishing, diving, or snorkeling. 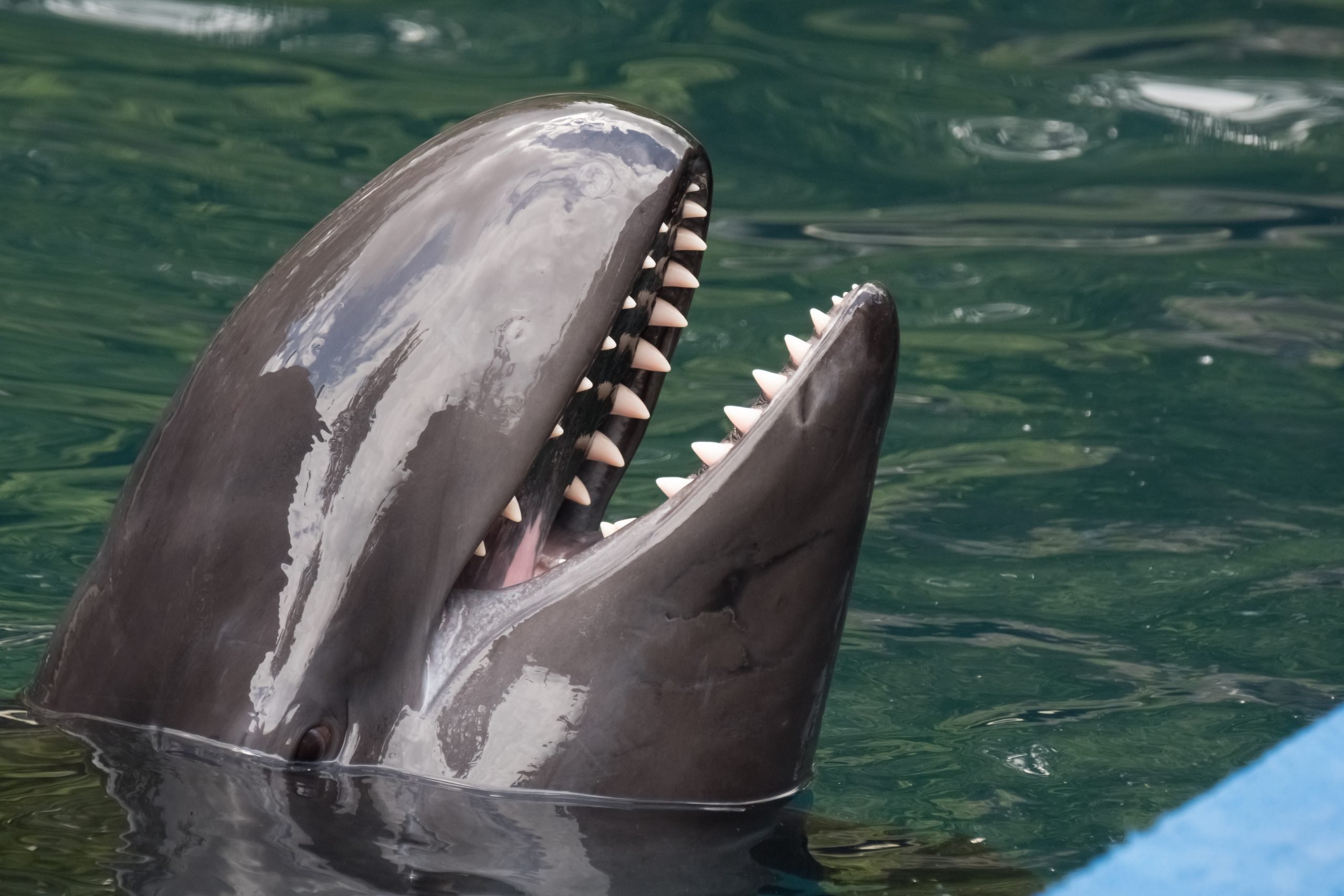 Fishing operations are one of the biggest threats to false killer whales and are likely to become tangled in fishing nets. Entanglement is a significant threat to them as it can cause drowning or loss of circulation. Swallowing fishing hooks can also be harmful to their digestive tracts.

Due to commercial overfishing issues in their primary habitats, false killer whales also face the challenge of having less and less to eat.

Previously, false killer whales were considered to be more capable of adapting to life in captivity than other dolphins. Many aquariums around the world have now banned the captivity of cetaceans.

Climate change can also affect food availability. This can be especially harmful to this species as they already face scarcity in prey due to commercial fishing of some of their main food sources, such as tuna.

False killer whales are top predators and have no known major predator of their own. Besides humans and global warming, their biggest threat is their slow reproductive rate as well as their naturally rare status.

These group-dwelling dolphins tend to become beached. They are at risk for mass strandings, sometimes resulting in an entire pod becoming stranded. Mass strandings are common because the species tend to hunt in larger family groups.

False killer whales are also vulnerable to underwater noise pollution caused by human navigation. They can become disoriented, which can lead to the threat of entanglement in fishing equipment. Consuming plastic is also a significant threat to these creatures’ health and reproductive success. 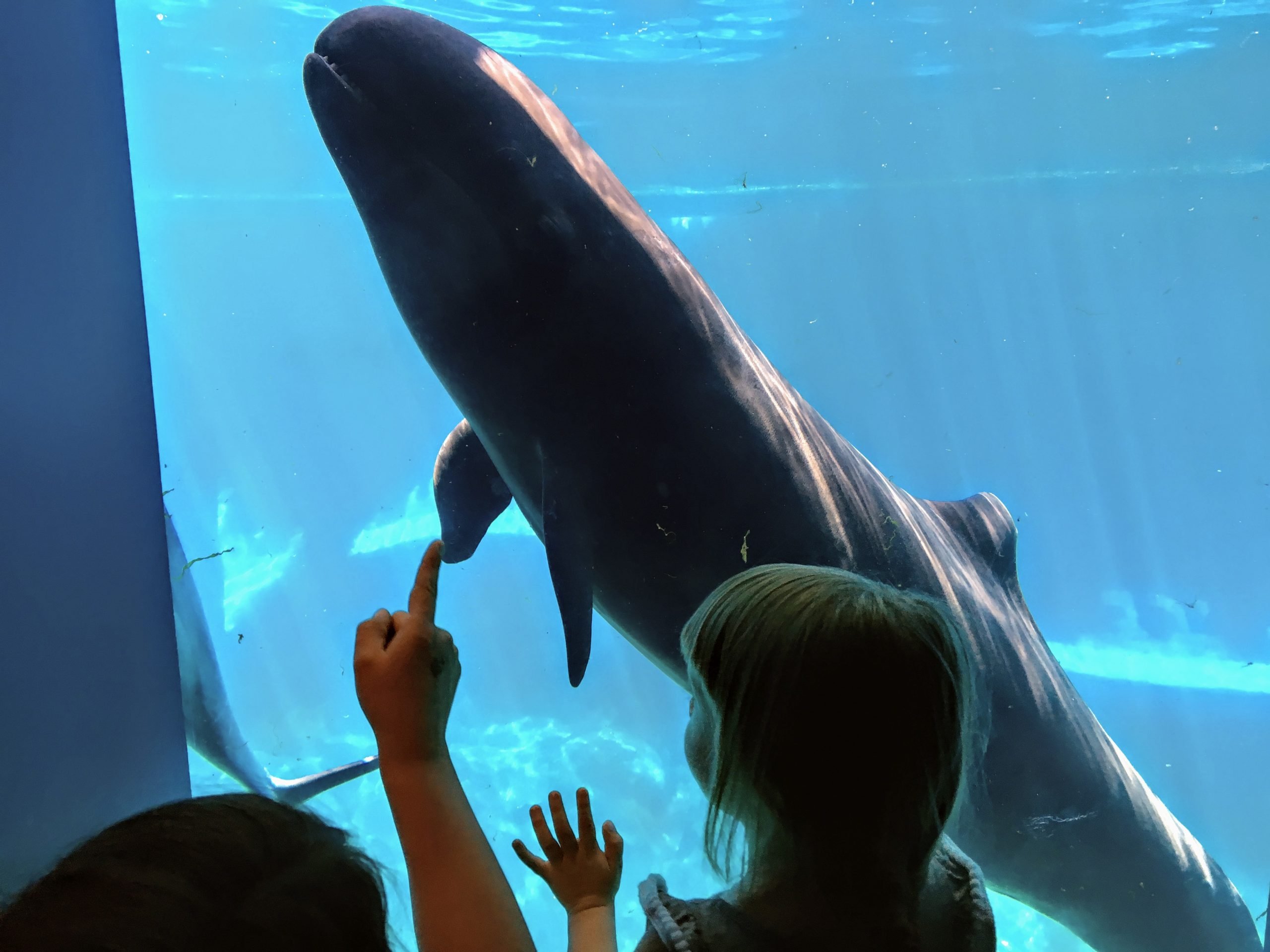 There are an estimated 60,000 false killer whales in the oceans. However, we do not know the exact number as this species has been difficult for scientists to study with certainty. False killer whales are listed as near threatened by the IUCN Red List.

The main population of false killer whales is protected under the U.S. Endangered Species Act. The species is included in the Memorandum of Understanding for the Conservation of Cetaceans and Their Habitats in the Pacific Islands Region.