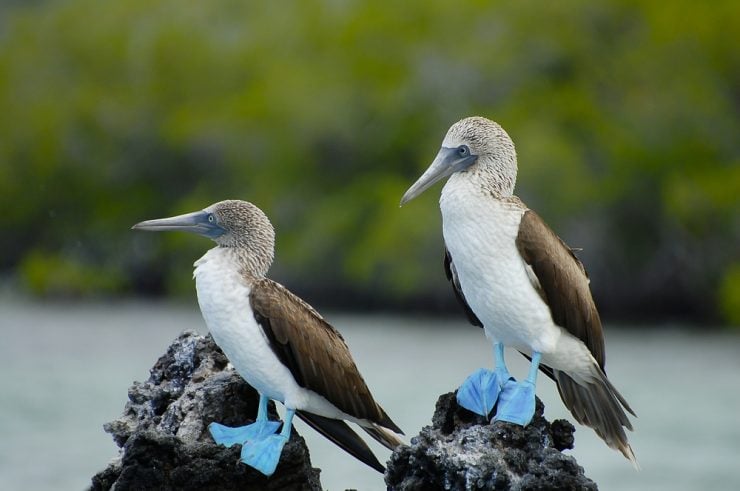 The blue-footed booby, known scientifically as Sula nebouxii, is a long-winged, plunge-diving seabird known for its distinctive blue feet and clumsy mating dance. The male birds perform this dance, a high-stepping strut to attract females and demonstrate their suitability to mate.

Early Europeans, seeing this clumsy dance combined with the booby’s lack of fear of humans, gave them the Spanish name bobo (meaning silly or foolish), which then became booby. 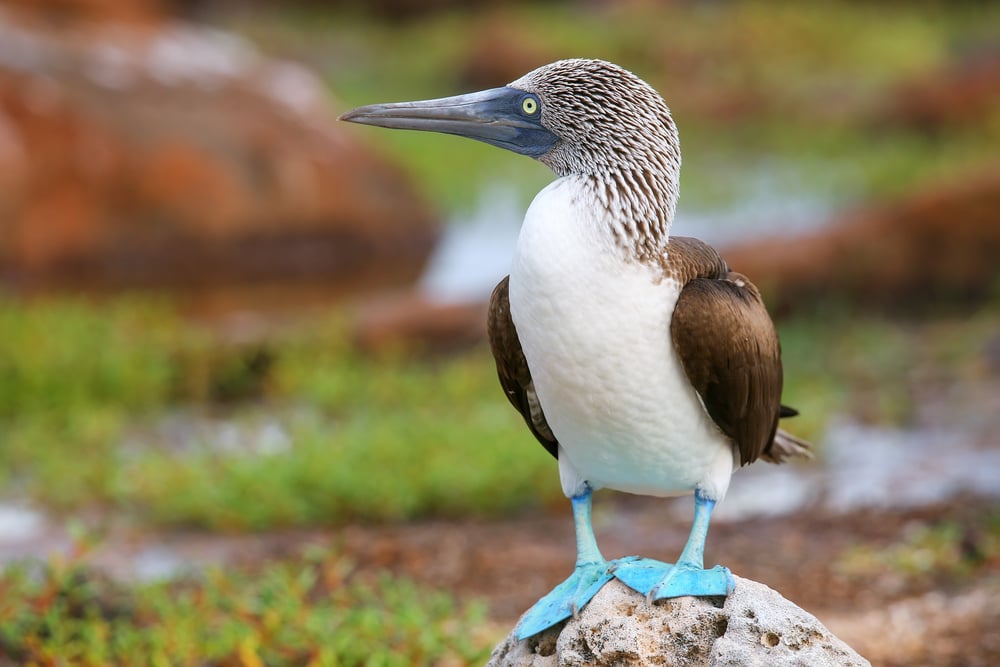 An adult blue-footed booby is roughly the size of a goose: 32 to 34 inches long with a wingspan of nearly 5 feet. The females are slightly larger and heavier than the males, who weigh on average about 3.25 pounds.

The blue-footed booby is a bird that has evolved a shape ideal for catching fish from the air.

Characterized by a long neck and a sharp, serrated bill for plunge-diving, blue-footed boobies’ also benefit from eyes that are placed on either side of its bill and face the front. This eye arrangement allows birds who dive from great heights straight down into the water to possess a great degree of depth perception and gives them stereoscopic vision.

When they’re born, chicks have brown beaks and feet and are covered in a thin layer of soft white down that will molt as adult feathers come in. The chick’s feet will also get lighter and more blue as the chick gets older, signaling sexual maturity to future mates.

The adult blue-footed booby has brown wings, a head and neck that are brown with black streaks, and a white chest and underside to help contrast its bright blue feet. This brilliant blue or turquoise color is due to the pigmentation from the bird’s fresh fish diet, and as the bird eats less or more fish, the shade of blue will change accordingly. Females can tell the bird’s health simply by how vivid the blue is on the male’s feet.

A color variation exists in the two subspecies of adult blue-footed boobies. The subspecies that make their home on the Galápagos Islands (Sula nebouxii excisa) are larger and lighter-colored than the subspecies in the rest of the world. 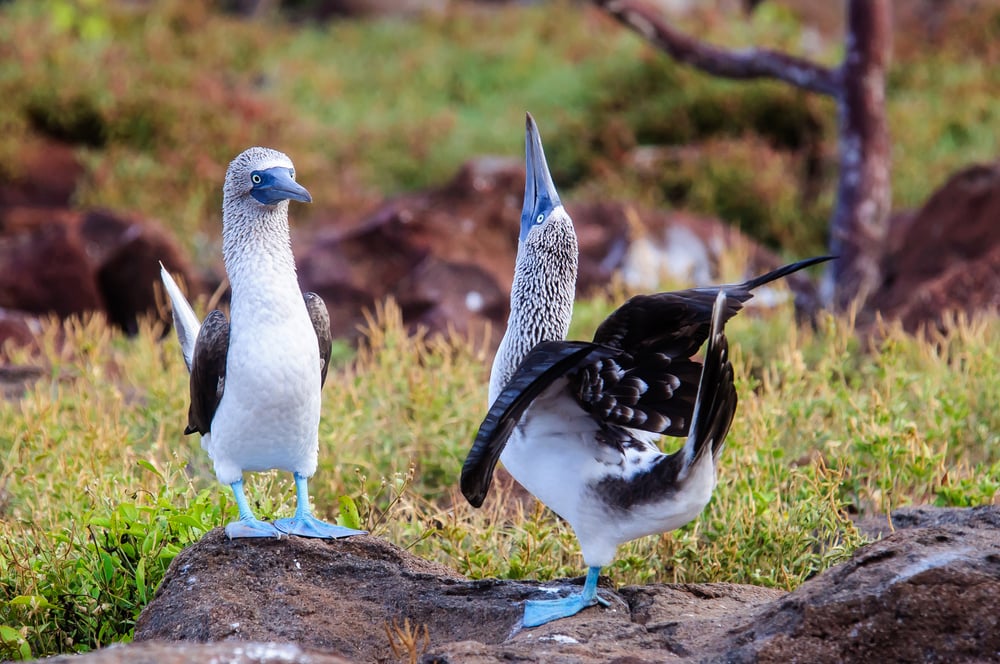 In the wild, the blue-footed booby can live up to 17 years due to a lack of predators and relatively isolated habitats. Females begin breeding at 1-6 years of age and males slightly later at 2-6 years of age.

Mating for the blue-footed booby, which occurs year round, involves an elaborate male courtship dance starting with the male circling his territory, then a high-stepping strut that shows off one foot and then the other to the potential mate. Females use this information to choose young, healthy males with the brightest blue feet to pair with, beginning a relationship that is principally monogamous.

Female blue-footed booby lay two to three eggs roughly 4-5 days apart in nests on the rocky coasts of islands. They will often return to the same nesting area year after year in a limited natal dispersal practice. It is believed a nest that successfully reared chicks to adulthood in the past will do so again.

Both blue-footed booby parents will be involved in rearing the chicks, starting as soon as the eggs are laid. Mother and father take turns sitting on the eggs using their webbed feet to incubate them while the other parent keeps watch or hunts for food. 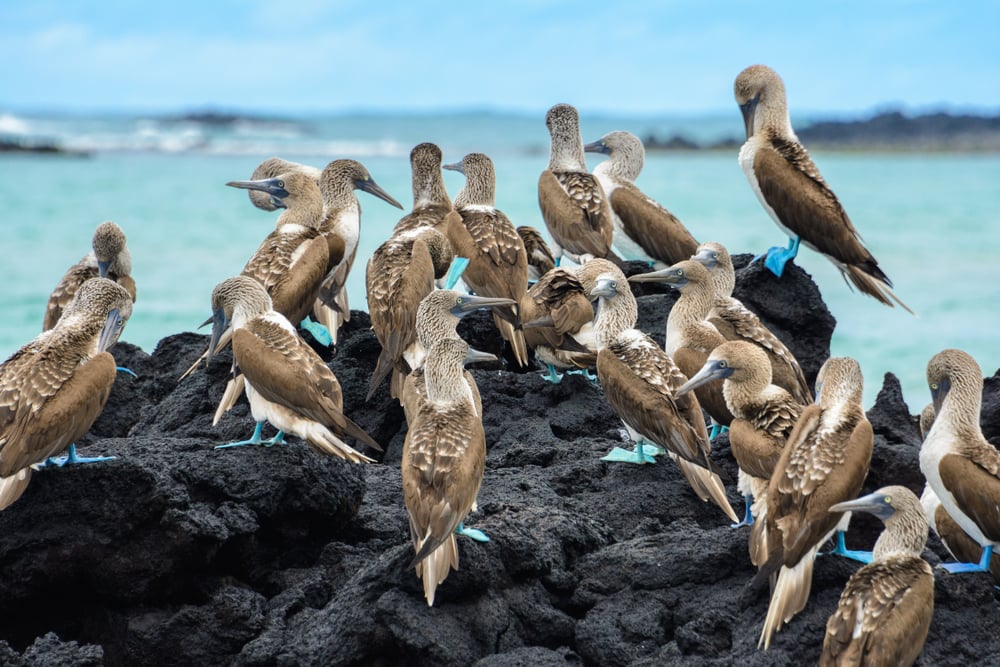 Where does the Blue-footed booby live?

There are two subspecies of the blue-footed booby, each with a different geographical range in which they live. Both subspecies breed on the rocky coasts and will sit on objects near or above open water.

Sula nebouxii nebouxii: lives on the Pacific coast of Mexico to Peru

Sula nebouxii excisa: lives on the coasts of the Galápagos Islands

The blue-footed bobby lives in a large nesting colony environment, although each mated pair separate themselves from other pairs at a considerable distance when possible. The birds are diurnal, hunting during the day and sleeping at night.

During the day, one parent will monitor helpless young chicks, protecting them from the few predators that pose a risk. The other parent will spend the day on the open sea fishing and obtaining food for the nest. At night, blue-footed boobies will roost on rocky coastline environments with their mates and chicks. 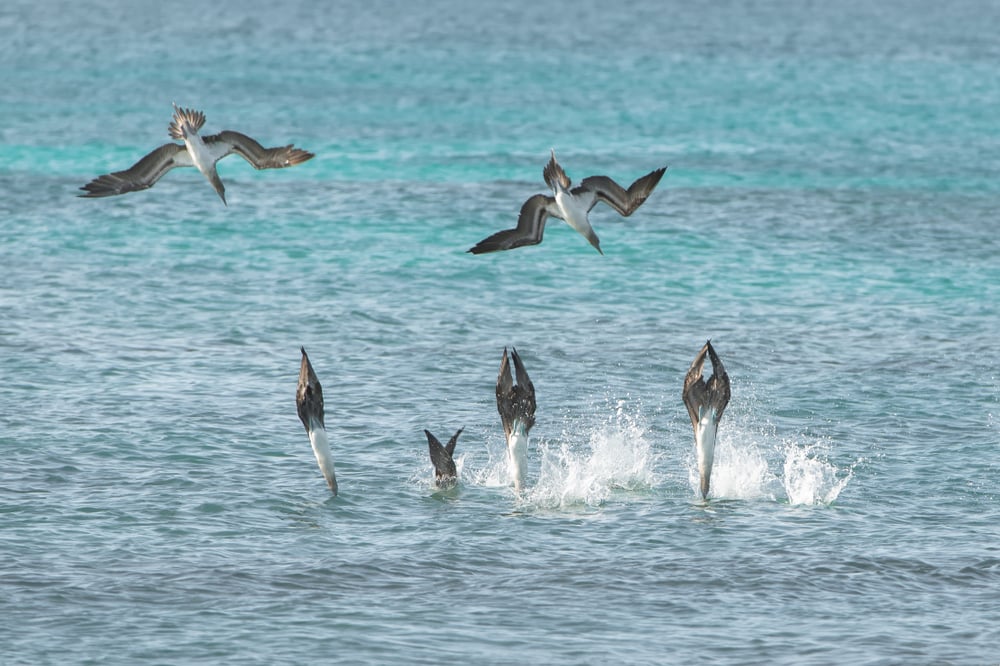 What does the Blue-footed booby eat?

The blue-footed booby diet consists mainly of fish (Anchovies, sardines, mackerel, flying fish, and other small fish) and squid, which are caught through plunge-diving from sitting positions on the water or very great heights while flying.

This fishing is done singly, in pairs, and in groups of up to 12 birds, where the group acts together to hunt a large school of fish. The blue-footed booby acting as the group leader will signal the other birds when they spot the lead fish of a school, and all the birds will dive together like arrows being shot from a bow for the greatest benefit.

Male and female blue-footed boobies catch prey of different sizes thanks to their sizes. The smaller male is a shallow diver, while the heavier female can make deeper dives farther offshore. 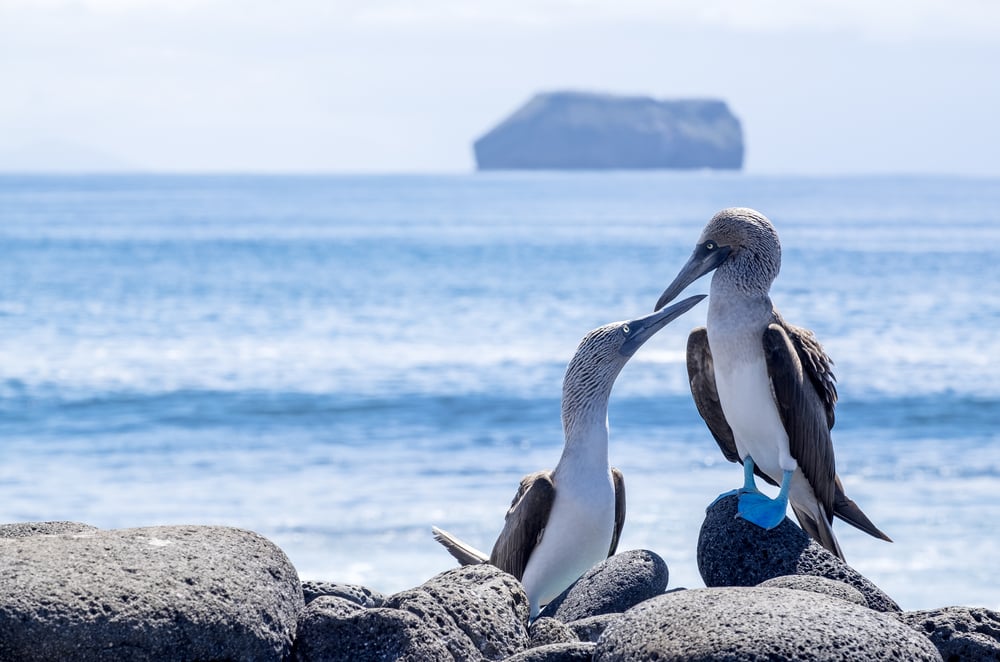 Blue-footed boobies are typically not afraid of humans, having evolved in environments where they have little to no interaction with them and have not learned to fear them.

However, as humans encroach on their territory on the Pacific coast, there is the chance of a threat for both adult birds through humans hunting and unborn chicks whose eggs may be taken from the nest.

It is speculated that rising sea levels due to global warming will begin to affect mating pairs’ ability to find suitable level ground to place nests. As land at sea level is covered or eroded, birds will need to move to higher ground, thus reducing the number of eggs laid.

On the Galápagos Islands, where there is little to no human interference, the only predator of Blue-footed boobies is the Galápagos Hawk, a bird of prey that attacks chicks when their parents begin leaving them alone in the nest, usually when the chicks have gained about 40% of their adult weight.

Food scarcity can be a threat to the survival of the species.

A subspecies of sardines, which blue-footed boobies rely on for a large percentage of their diet, has started to become scarce on the Galápagos Islands. However, the dropping numbers don’t appear to be related to human intervention or climate change. For those pairs that breed, parasites in the nest made on the bare ground can threaten newborn chicks.

Blue-footed booby populations are considered stable, although there are indications of a decreasing number of breeding pairs on the Galápagos Islands due to food scarcity. The species conservation status is at the lowest risk of extinction ‘Least Concern’ on the IUCN Red List of Threatened Species. 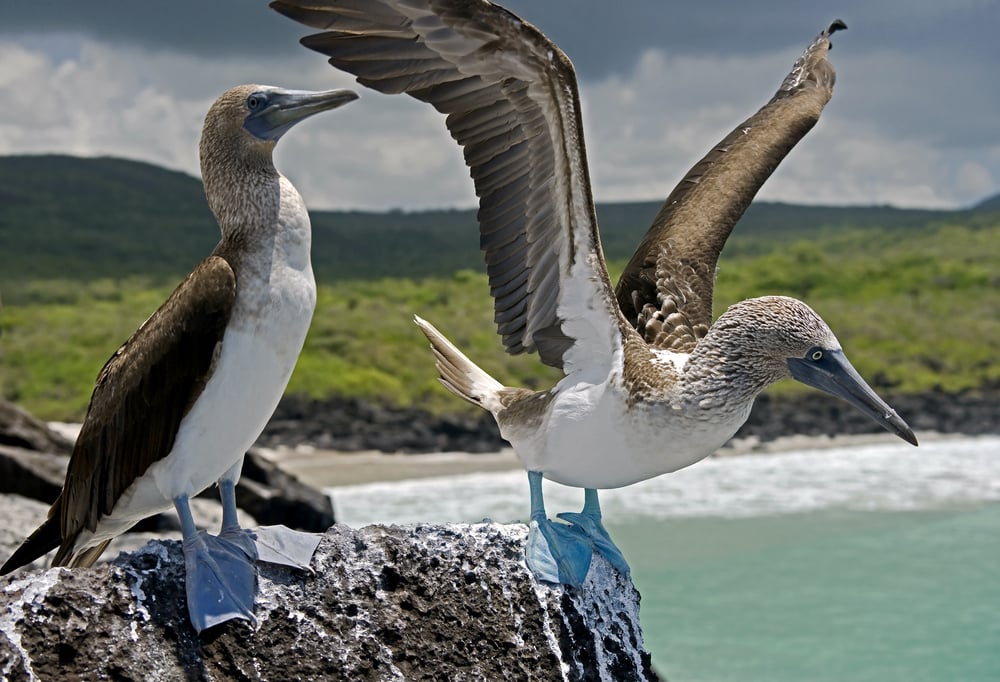 Fun Facts About the Blue-Footed Booby