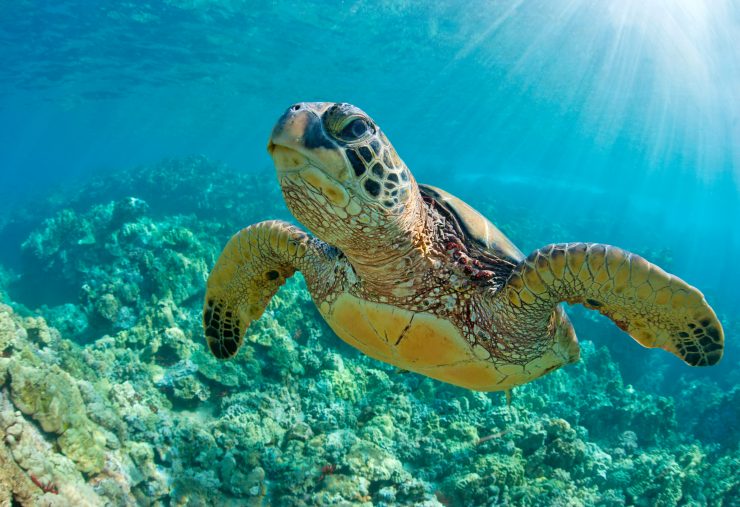 The green sea turtle, known in the books as the Chelonia mydas, is one of the most unique sea turtles native to warm, tropical waters. It’s the only species that belongs to the genus Chelonia. Green sea turtles are considered endangered and face various threats, including bycatch, climate change, and predators.

An adult green sea turtle’s shell can measure anywhere from three to five feet in length. They can weigh as little as 240 pounds or reach up to an astonishing 700 pounds, depending on their sex and health. The largest green sea turtle ever recorded was 5 feet long and 871 pounds. 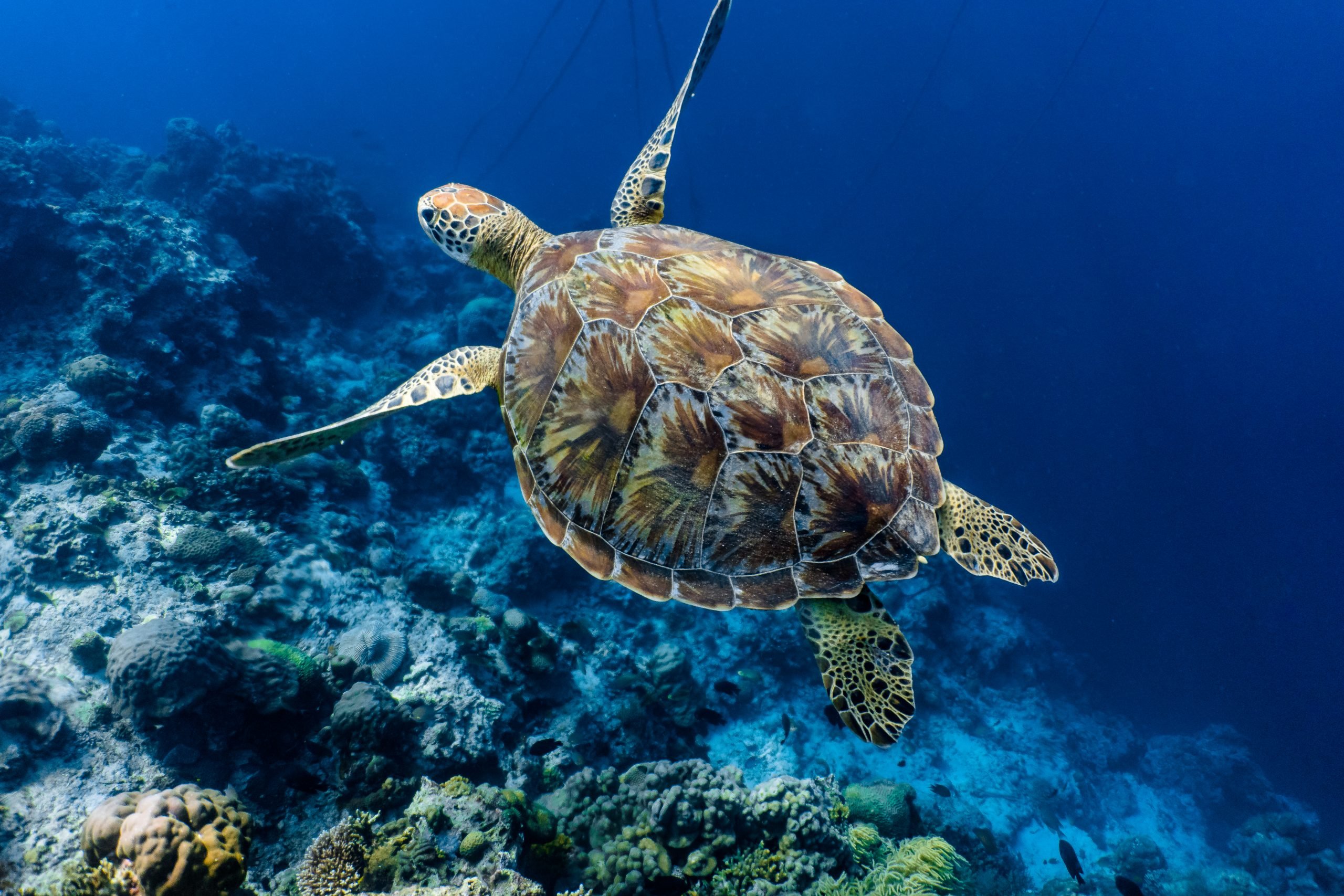 Green sea turtles received their name based on their cartilage and fat’s green color and not the color of the shell itself.

In fact, a green sea turtle’s shells tend to range from shades of brown to olive. The Pacific green sea turtle, found in Alaska’s coastal waters to Chile, has a dark grey or black shell, which has earned them the unofficial name of the “black turtle.” Their bodies are flat and oval-shaped. 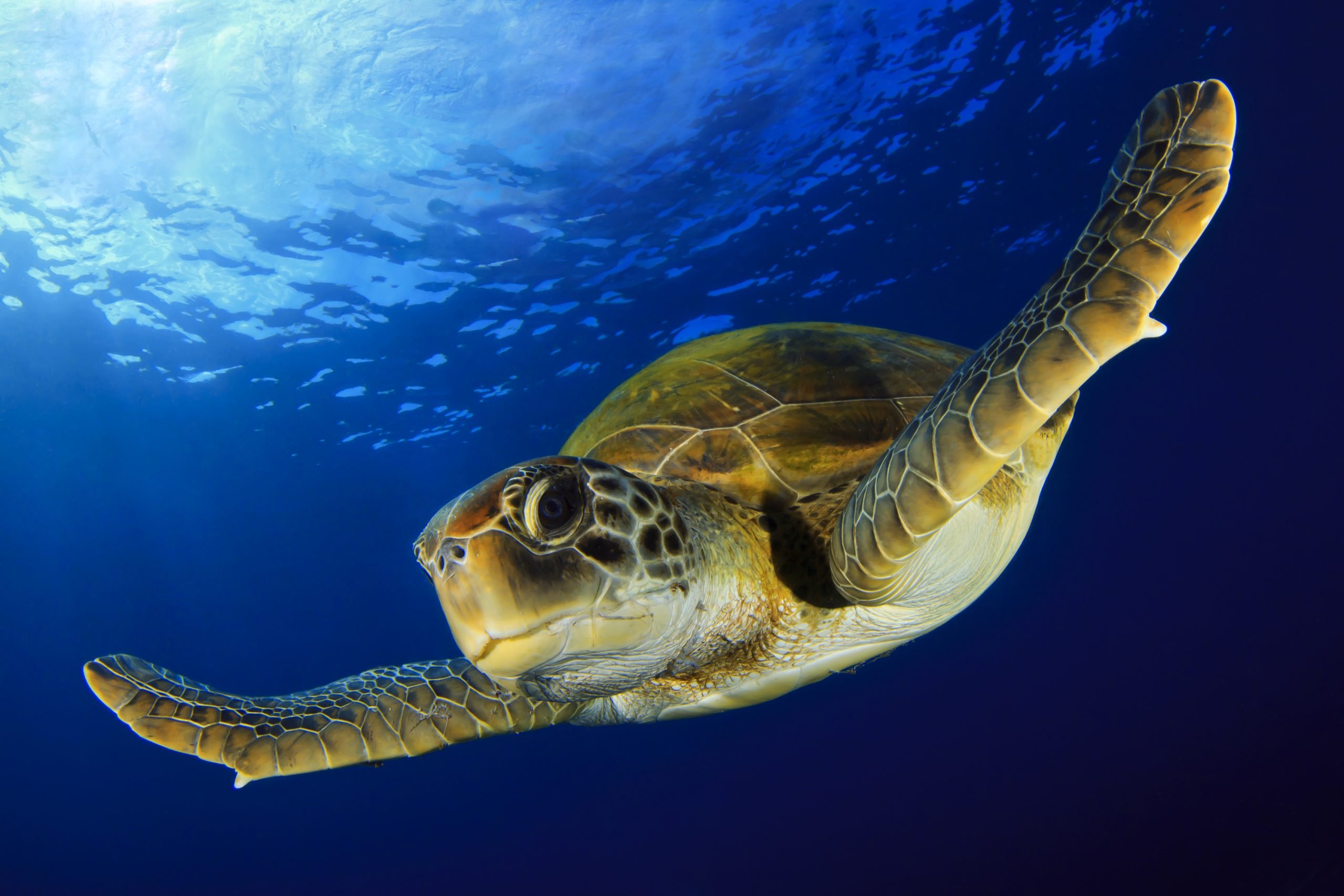 Most sea turtles have two pairs of scales in front of their eyes, known as prefrontal scales. Green sea turtles only have one pair of prefrontal scales, making them easily distinguishable from other sea turtle species. Their heads are small and blunt with a serrated jaw, and their shell is composed of large, non-overlapping scales with four scales on each side. Each flipper has at least one visible claw.

Oddly enough, the exact lifespan of green sea turtles is unknown but is estimated to be 70 to 80 years old at the minimum.

Green sea turtles become sexually mature around 25 to 30 years old but may not begin nesting until they’ve reached almost 40 years old. Like their lifespan, the green sea turtle’s active reproductive period is also unknown, but some turtles have been observed nesting for approximately 38 years. 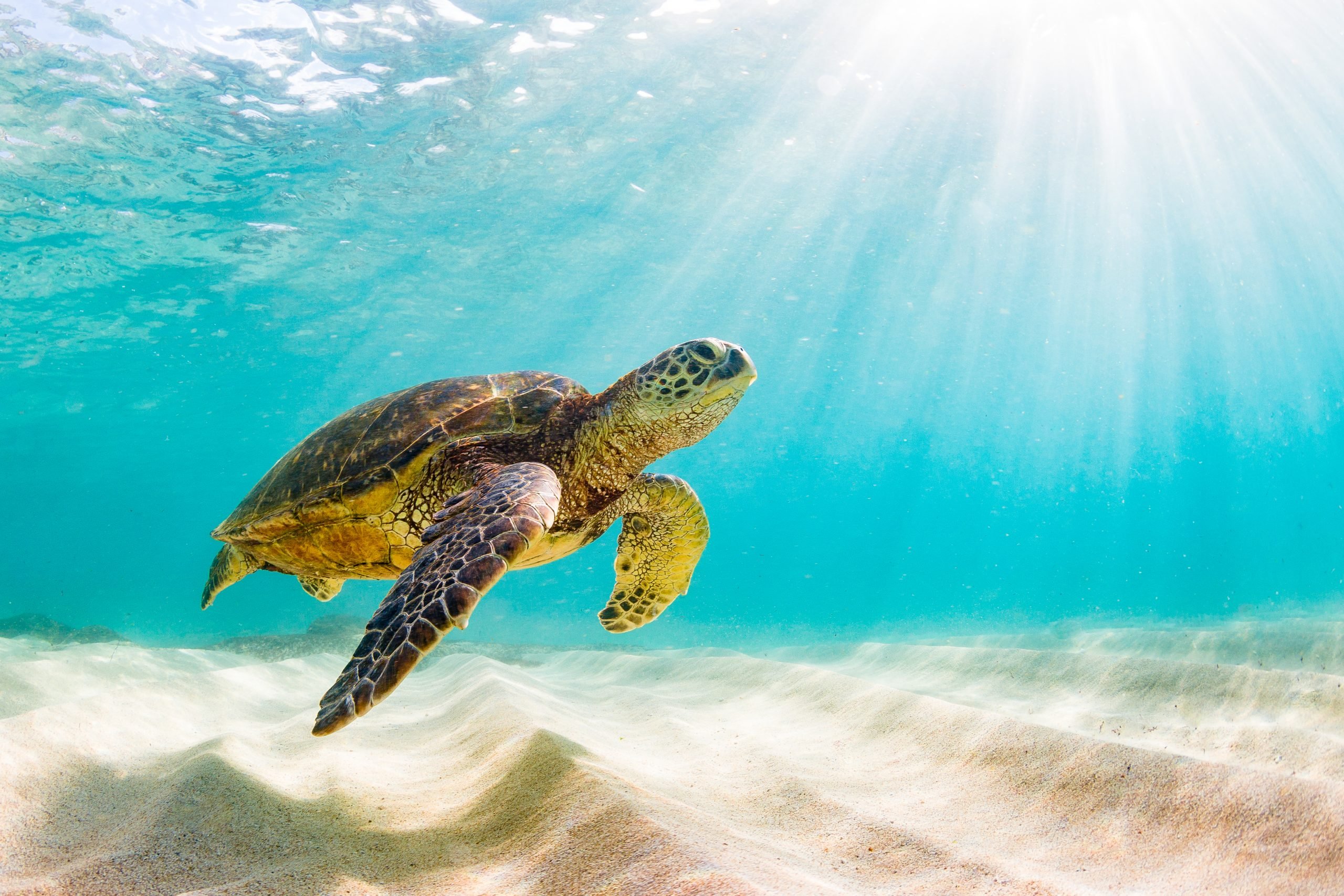 Male green turtles can mate every year, but females travel from their foraging areas to their nesting beaches every two to five years. Green turtles return to the same beaches that their mothers used. The act of mating occurs at the green sea turtle’s foraging grounds, along migration paths, and offshore of nesting beaches.

The nesting period depends on the region, but green sea turtle nesting in the United States occurs in late spring and early summer when temperatures are warm. While at their nesting area, a female green sea turtle will lay approximately 100 eggs per nest and nest every couple of weeks over several months before returning to their foraging grounds.

The green sea turtle eggs hatch around two months after nesting and begin to make their way to the water. Green turtle hatchlings move towards the brightest horizon to find the water. In populated areas, they often get disoriented by artificial beach lighting that prevents them from finding the water and ultimately results in death. 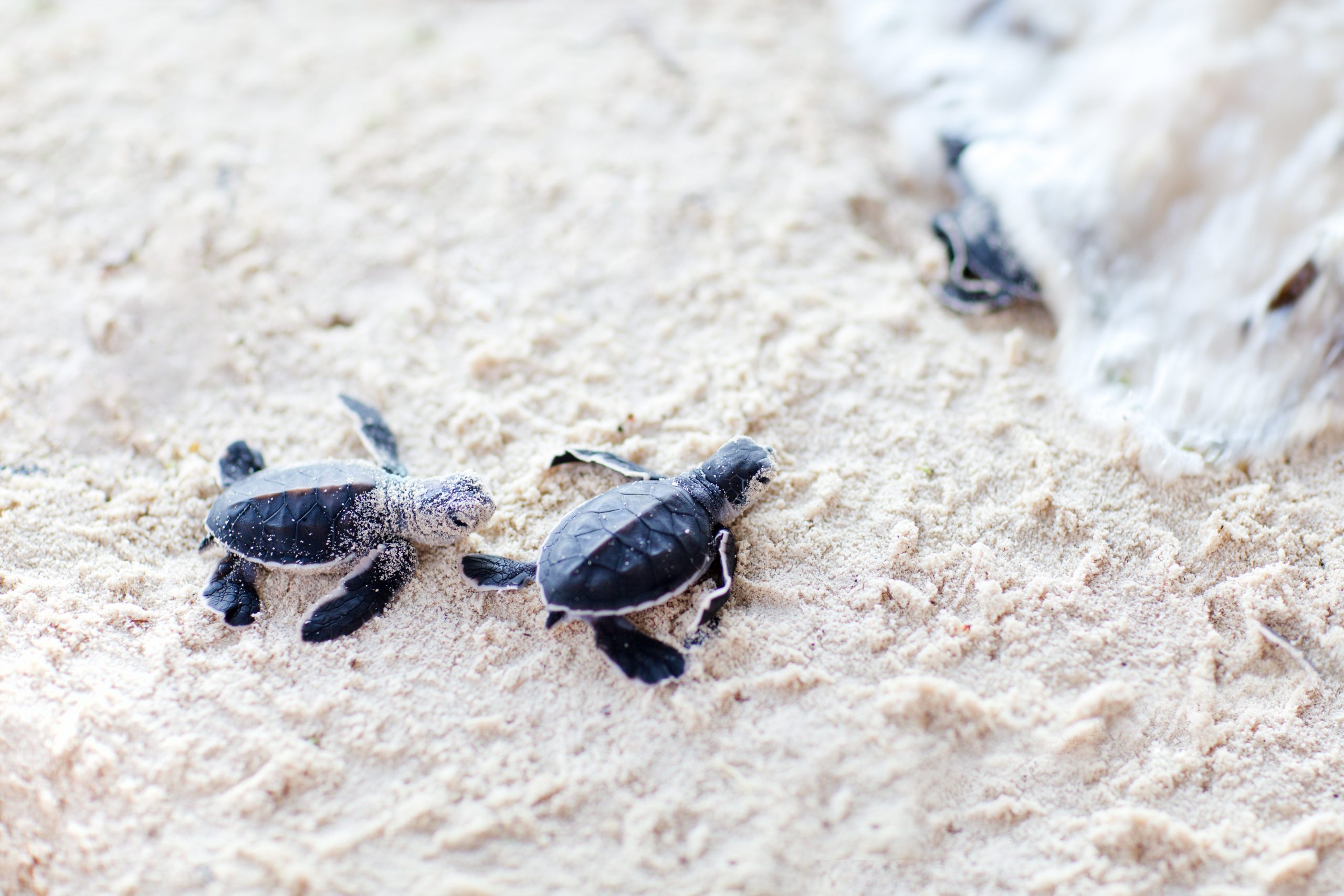 Where Does the Green Sea Turtle Live?

Geographically, green sea turtles are found anywhere globally with warm subtropical and tropical ocean waters, with nesting occurring in over 80 countries. The green sea turtle can be found in the Atlantic, Indian, and Pacific Oceans.

Once a hatchling green sea turtle leaves its nest for the first time, it rarely returns to land throughout its life. They stay in shallow waters offshore, where it feeds on vegetation near islands and beaches. 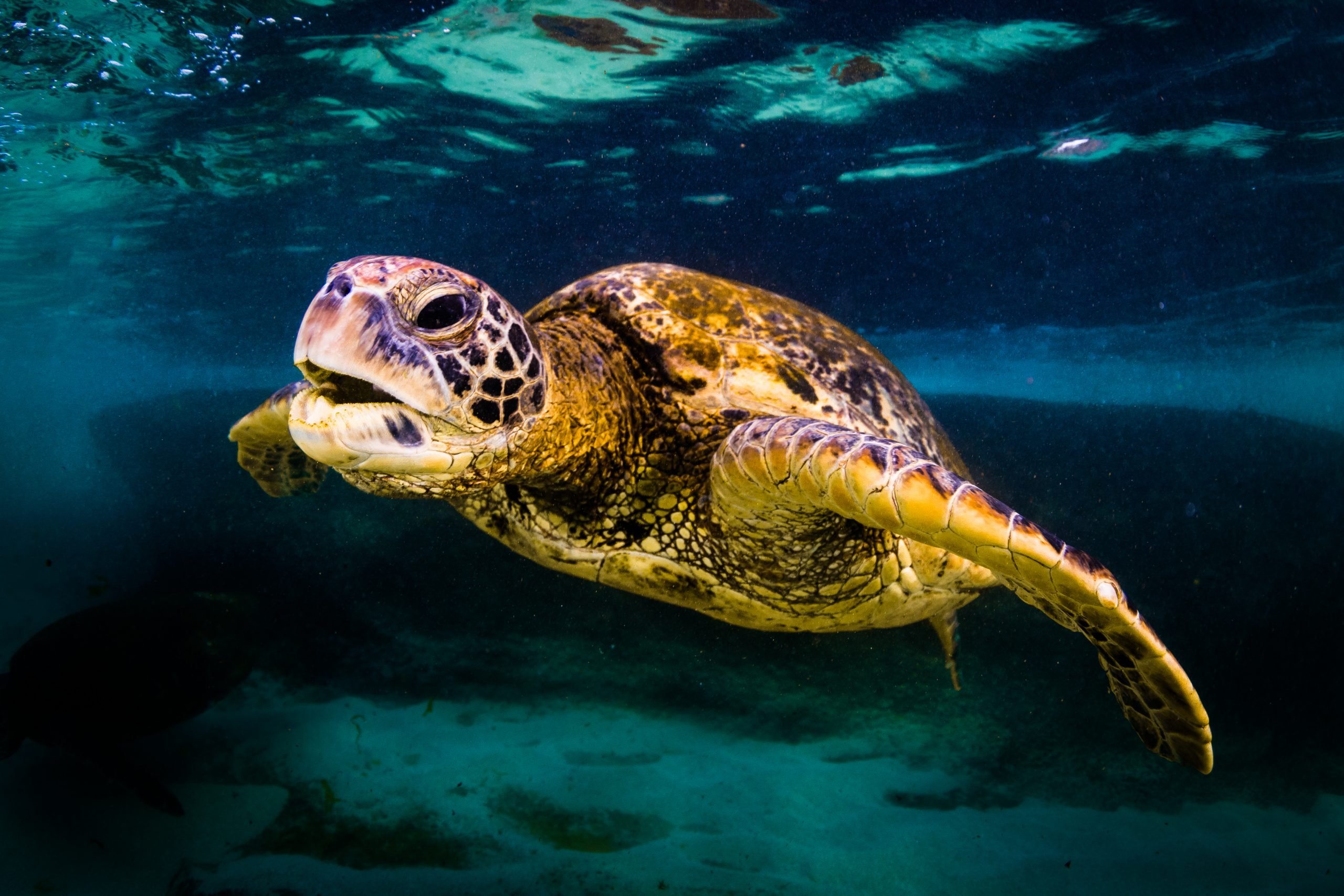 Green sea turtles tend to have complex, confusing, and unique migration patterns because each turtle prefers to return to their natal beach for each nesting season (where they were originally born). They’ll travel far distances and even traverse oceans.

The Hawaiian Islands, east coast of Florida, Virgin Islands, and Puerto Rico are all hotspots in the United States where green sea turtles are frequently seen. Rarely, green sea turtles can be observed nesting along the Atlantic coast in Georgia and North and South Carolina.

Outside of the United States, green sea turtles live near the Mesoamerican Reef, Coastal East Africa, Galápagos, and the Coral Triangle. Overall, green sea turtles can be spotted anywhere with warm coastal waters and sandy beaches. 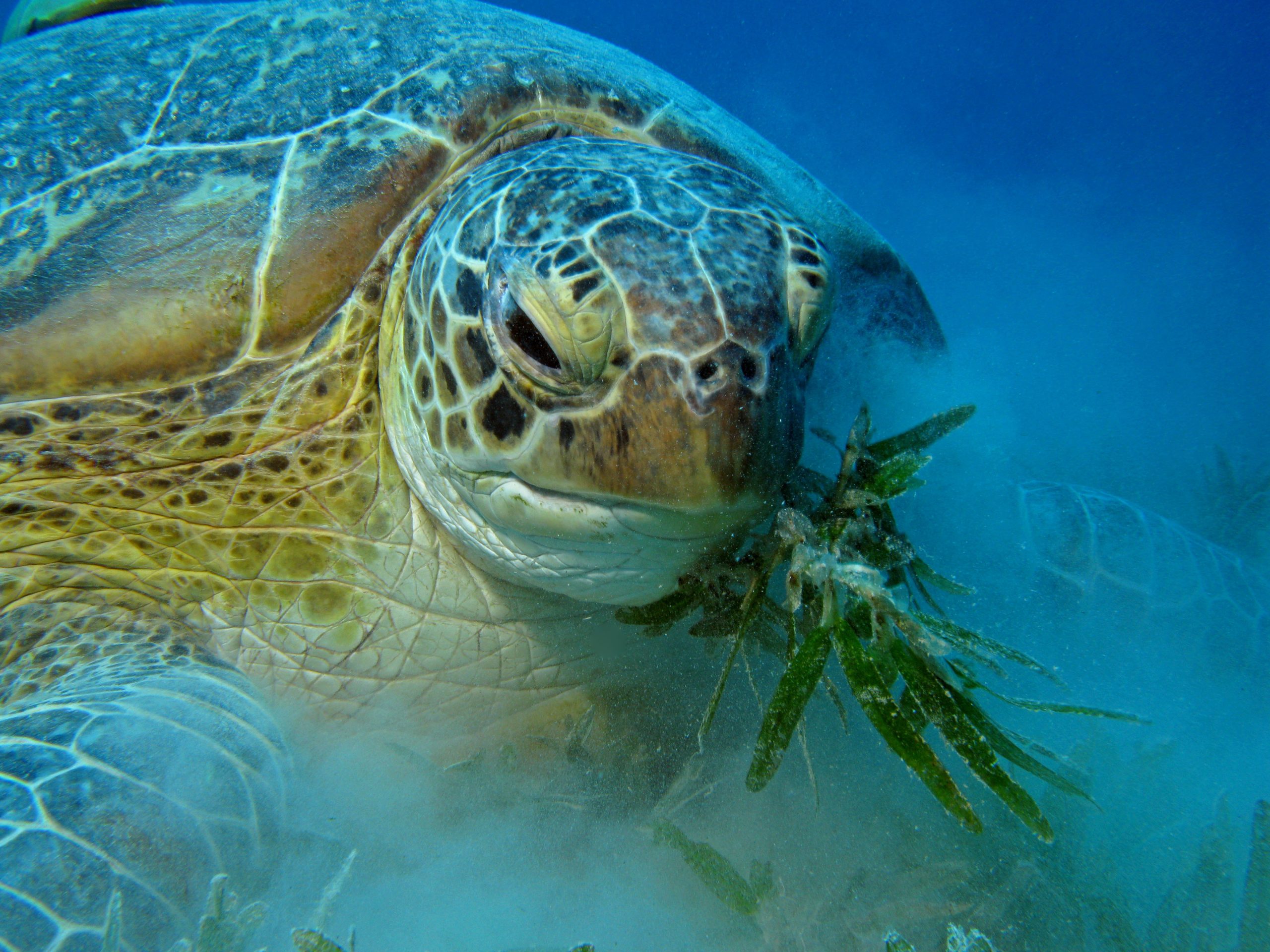 What Does the Green Sea Turtle Eat?

Another rarity that sets the green sea turtle apart from its counterparts is its diet. The green sea turtle is one of the only sea turtles that are completely herbivorous once they reach adulthood and enjoy feeding on sea vegetation such as algae and seagrasses. Their serrated jaws help them tear into patches of dense vegetation.

Green sea turtles face many threats to their population’s well-being, including humans and natural predators.

There are several threats by humans that harm the green sea turtle population.

The largest loss of life to the green sea turtle is attributed to “bycatch,” which occurs when sea turtles are caught by fishermen netting for shrimp and other fish. Sea turtles need to frequently return to the surface for air and end up drowning while trapped in these nets. Per year, the fatalities from bycatching climb into the hundreds of thousands.

Overharvesting and illegal trade are the second most harmful practices to the green sea turtle. Poachers hunt the green turtle for its eggs and internal organs. In West Africa, sea turtles are killed so individuals can use them in ceremonies and medicinal remedies.

Additionally, the rising sea levels and vicious storms contribute to the loss of beach habitats, affecting green turtle breeding. The warmer temperatures in these beach habitats also contribute to more female hatchlings than males, leading the species closer to extinction.

While green turtles are particularly vulnerable to being eaten by nocturnal predators, newborn green sea turtles hatch during the nighttime due to predators’ overall decreased presence. Birds, crabs, and other predatory mammals are threats to newborn turtles, as well as humans.

Mature green sea turtles do not have many predators in the open ocean but can be placed in dangerous situations near sharks and other large predators. The most vulnerable life stage of a green sea turtle is infancy.

Some predators will dig up green turtle nests before the eggs have a chance to hatch.

According to the IUCN Red List, the most comprehensive global approach for evaluating a species’ conservation status, green sea turtles are considered to be endangered. This classification falls directly between “vulnerable” and “critically endangered.”

Green sea turtles are covered under many umbrella laws that protect a vast range of different sea turtles, such as the Endangered Species Act (ESA) in the United States and the Protection, Conservation and Recovery Law in Costa Rica.

Despite many conservation efforts, the green turtle population continues to decrease. It is extremely difficult to find a green sea turtle living in captivity, as many captured turtles are released after receiving medical care. 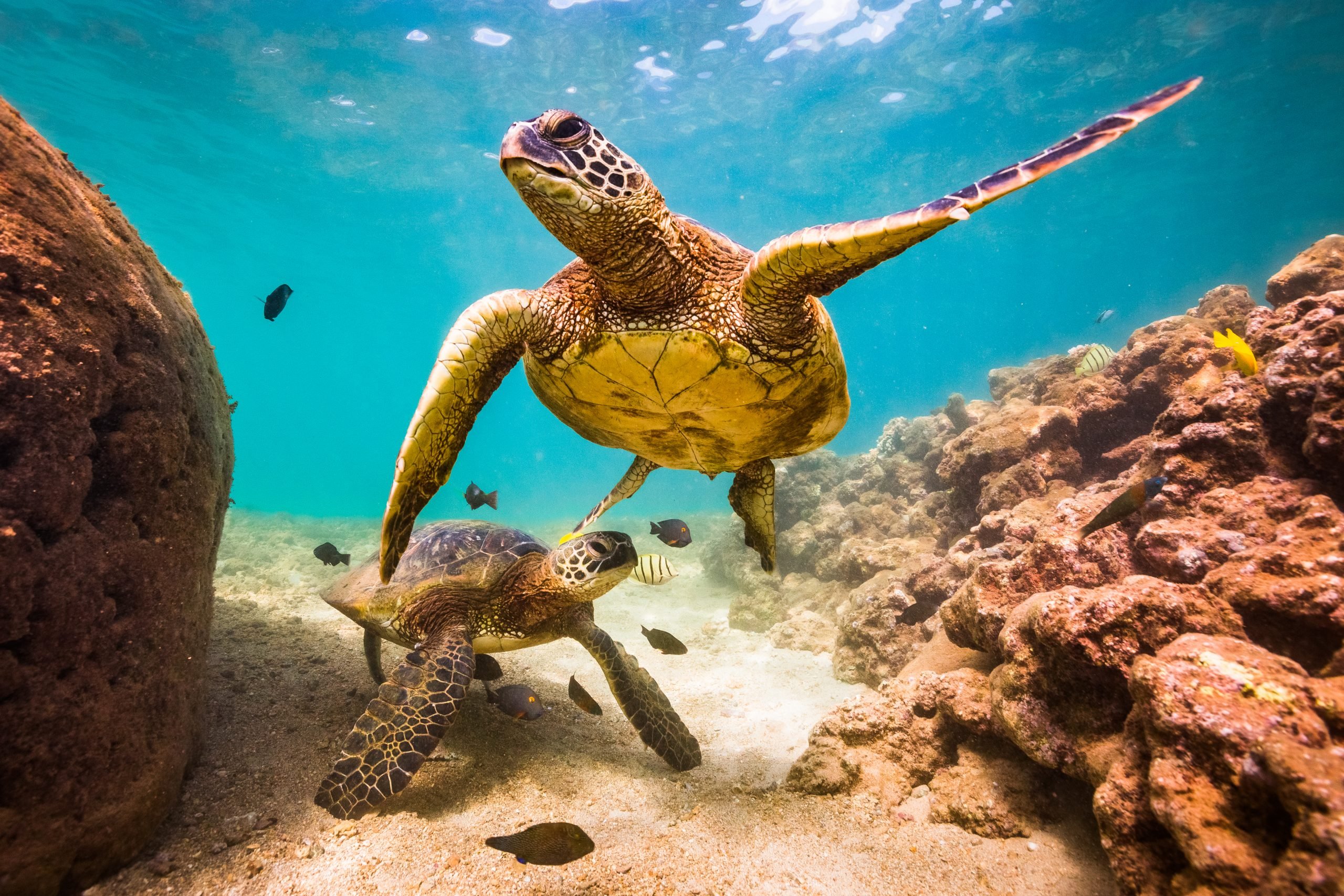 Here are some quirky facts about green sea turtles that you probably didn’t know.