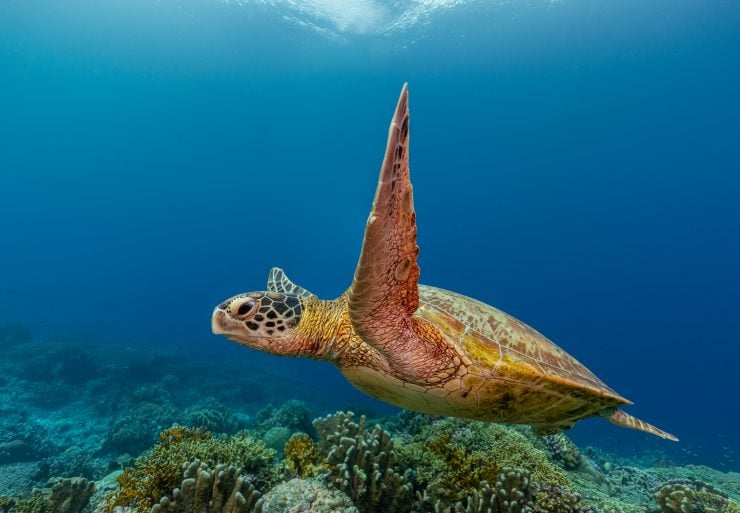 Green sea turtles are renowned for their strong swimming abilities.

However, don’t mistake this fact for speed, as green sea turtles are actually notoriously slow swimmers.

Fortunately for green sea turtles, they have the ability to accelerate in bursts of up to 22 miles per hour, though those are merely short periods of time and unsustainable over longer durations.

Those short bursts allow a green sea turtle enough time to escape potential predators initially, but mostly occur when the turtle is reacting to a disturbance. 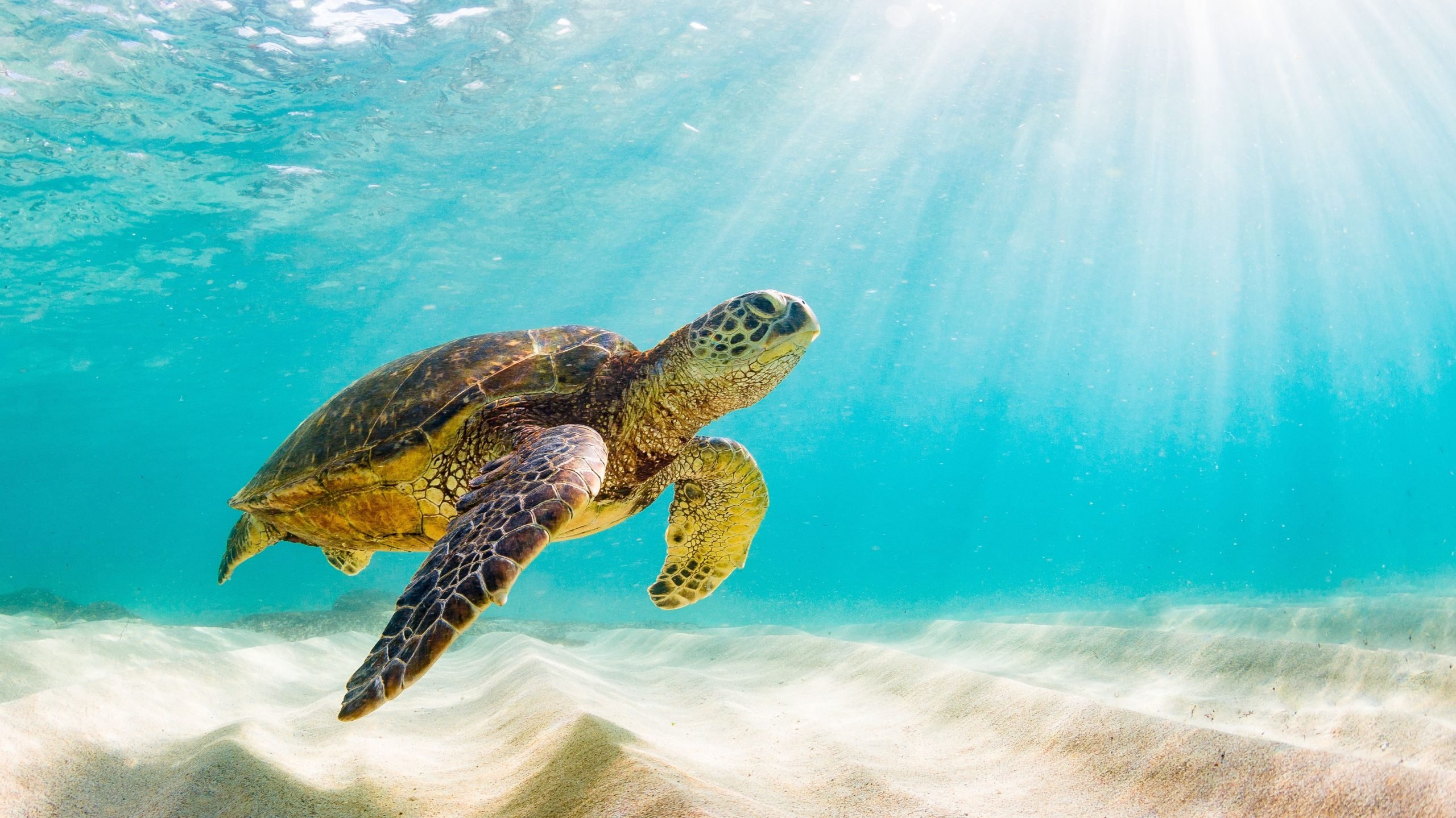 Why are Green Sea Turtles Such Slow Swimmers?

A green sea turtle’s biological composition doesn’t permit them to swim at a fast pace for prolonged periods of time.

Typically, a green sea turtle’s forelimbs morph into flippers for swimming once they enter the water from land, while its neck and other limbs are effectively rendered immobile while underwater.

This means that a green sea turtle only has a few limbs to utilize while swimming. That’s not a formula that translates to speed.

When combined with an inflexible outer shell, the swimming speed of a green sea turtle is drastically reduced.

All of these reasons explain a green sea turtle’s lack of overall swimming speed, yet despite this, they grade out as strong swimmers overall. 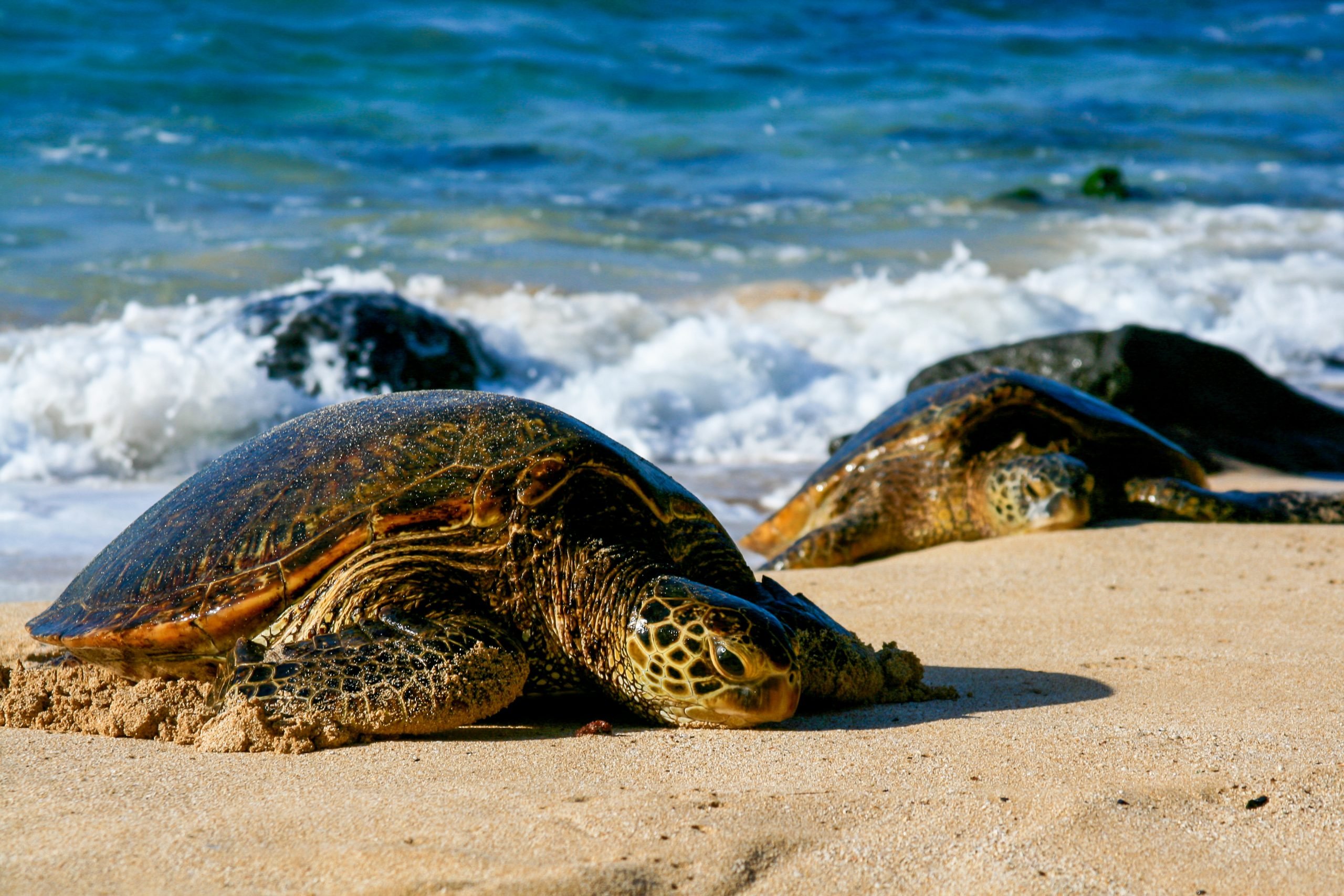 Turtles are one of the rare species of creatures that can live on both land and in the water.

But that doesn’t make them any faster when it comes to traveling on land instead of under the sea.

In fact, a green sea turtle is actually slower on land than underwater, which is mind-boggling to think about when considering how unhurried they already are in the latter place (the exception being occasional speed bursts).

Using their flippers and carrying their hard shells, a green sea turtle has to labor profusely to move on land, which certainly accounts for their lack of speed on a dry surface.

Not to mention, green sea turtles also nest on beaches. Their inability to move with quickness on land, unfortunately, puts them and their hatchlings at risk of being corralled by predators.

Regardless of environment or surroundings, a green turtle is just a slow-moving species.

Are All Turtle Species Slow?

In general, and when juxtaposed against other marine species, turtles are notoriously slow-moving sea creatures.

However, the green sea turtle happens to be one of the slowest turtle species in existence.

For comparison, the related leatherback sea turtle is actually one of the speediest turtle species in the world.

A leatherback sea turtle can reach swimming speeds of up to 22 miles per hour sustained, far outpacing their green sea turtle cousins.

Of course, leatherback sea turtles typically grow larger and therefore have more developed limbs that are better equipped to handle the rigors of swimming longer distances under the water.

Still, the leatherback sea turtle is much slower than most other marine species, namely bigger fish, squid or eels.

Green sea turtles are sluggish when on the move, whether by land or by sea.

The consensus is that they are faster underwater than on a dry surface, since green sea turtles have the ability to glide in water and can reach bursts that can propel them to speeds as quick as 22 miles per hour.

As discussed earlier, though, those bursts are unsustainable over longer periods of time, meaning they’re just an inherently slow species.