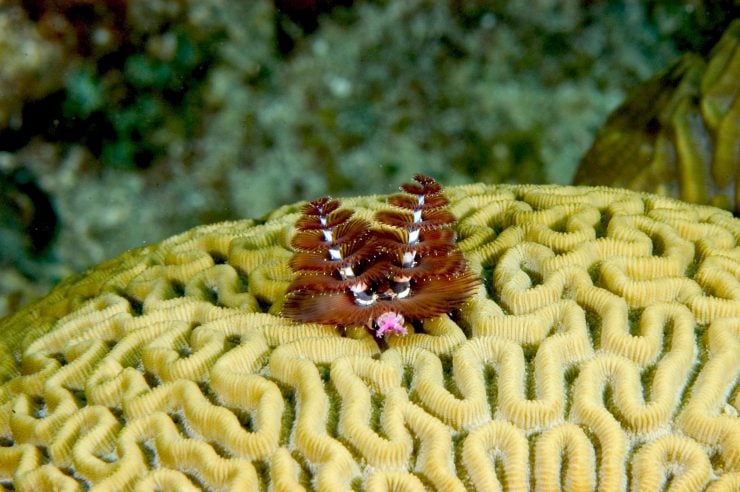 The Christmas tree worm, known scientifically as Spirobranchus giganteus, is a tube-building worm native to tropical oceans worldwide. These tiny marine worms, named for their resemblance to spindly fir trees, are often prized by underwater photographers and aquarists.

Despite their human interest, they remain widespread with a large population, and no conservation efforts are in place.

Christmas tree worms average about 1.5 inches in length, and their radioles can have a diameter of up to 1.5 inches. Due to their minuscule size, they weigh mere ounces. Many do not grow past one inch. 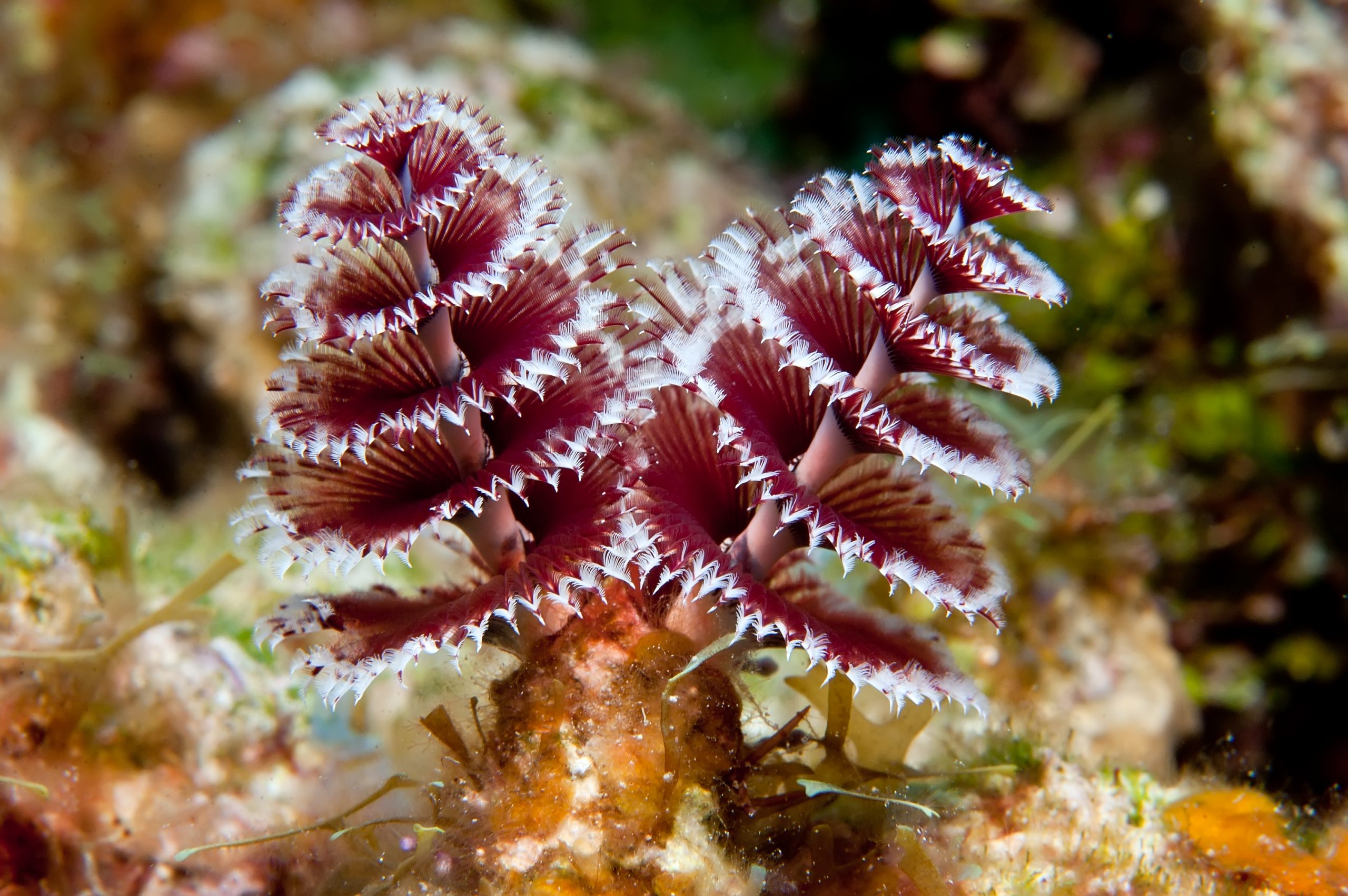 These worms have two crowns protruding from their tube-like bodies. The crowns resemble Christmas trees composed of radioles, which are appendages that look like hair coming from the worm’s spine. Their crowns come in various bright colors, ranging from white, blue, red, orange, and yellow. The radioles respirate and catch food using their cilia, which are hair-like bristles.

Since the worms are primarily sedentary, they lack the specialized appendages necessary for swimming. Unlike the closely related Sabellida fan worm, Christmas tree worms have a modified radiole called the operculum that secures its hole when they withdraw into their tube.

The worm’s body forms after the larvae settle on a coral. The coral then grows around the worm to form a tube. The worm’s parapodia (legs) and chaetae (bristles) stay in the tube, and they are about twice as long as the portion of the worm visible above the coral.

Christmas tree worms have a lifespan of approximately 40 years in an unpolluted habitat. More commonly, they live between 10-20 years due to climate change and predation.

The female worms will send eggs, and the males send sperm in the water to reproduce. The gametes come from their abdominal segments, and the eggs become fertilized apart from the female worm. This reproductive process makes them broadcast spawners.

Once fertilized, the eggs develop into larvae within 24 hours before they drift along with zooplankton for 9-12 days as they develop into larvae. The larvae then settle on some coral where they produce a mucus tube that becomes a calcareous one, and the creatures become Christmas tree worms.

Where Does the Christmas Tree Worm Live?

The Christmas tree worm lives in tropical oceans between the Caribbean and Indo-Pacific. They prefer shallow waters under 100 feet in depth.

After their larval lifespan, Christmas tree worms choose a coral habitat. They prefer specific species, including stony and brain corals. The colony density varies between a handful to over 100 worms per coral head, depending on the parent worm’s size and the coral’s health.

Once the larva has selected a coral, it constructs a calcium carbonate tube that remains its permanent home throughout its lifespan. Their tubes can develop between eight and ten inches in length, and the worms produce them by excreting calcium carbonate obtained from ingesting sand particles.

Since the tube is significantly longer than the worm, the worm can retract fully within it if it feels threatened. Once withdrawn, the worm can use its spiny operculum to plug the tube hole and defend itself from predators.

What Does the Christmas Tree Worm Eat?

The Christmas tree worm eats by trapping ciliates, zooplankton, organic detritus, phytoplankton, and other food particles with their radioles. The heavily-ciliated radioles pass the food into the worm’s mouth.

Their feeding process also goes by filter-feeding since they use their radioles to filter the best microorganisms for them to eat. 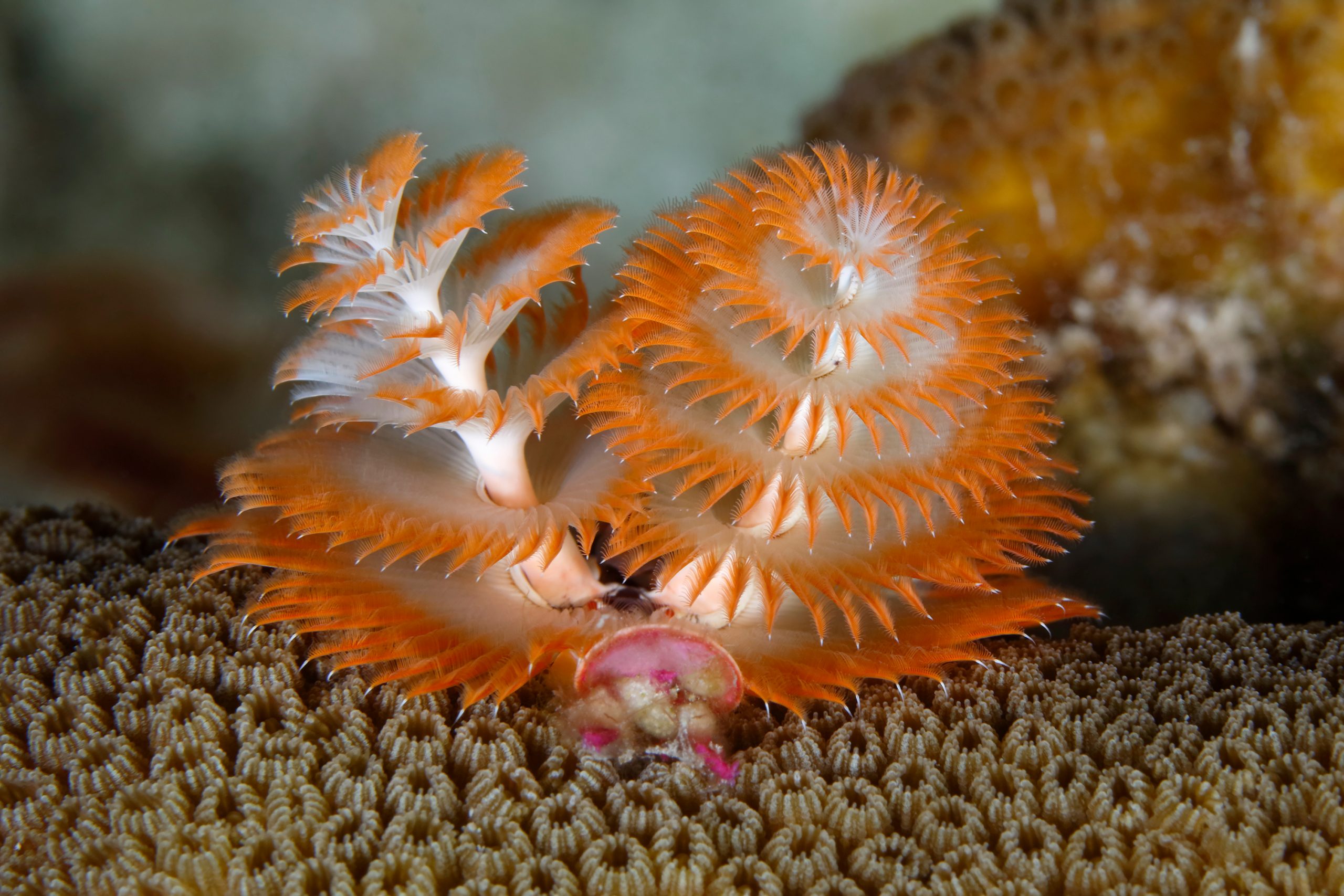 Christmas tree worms do not have many threats to survival. Their population has thrived throughout the world, but threats to corals and nearby habitats could lead to their harm.

These worms are not subject to commercial fishing, nor are they captured for food. However, they fascinate underwater photographers, divers, and aquarists with their dazzling colors. They may wish to harvest them for trade to aquariums. Since Christmas tree worms are shy, divers will need to wait for them to come out. Impatient individuals may disturb them to get a better view.

However, anthropogenic pollution can damage the habitats they live in, shortening their lifespans. Also, if a diver disturbs their environment, they could harm the worm. For the most part, these worms live healthy lives as long as no divers perturb them.

Despite humans being a minimal direct threat, climate change proves detrimental to their health. Human-caused carbon emissions have acidified seawater, making it harder for Christmas tree worms to build their calcareous tubes and reproduce.

Poorly preserved underwater habitats could lead to unhealthy coral reefs and thus harm the worms. Reefs provide housing and support their feeding while the Christmas tree worms push away starfish that could otherwise destroy the coral. Furthermore, damaged coral reefs potentially recover faster when there is a nearby marine worm population.

However, these marine worms can live independently of their reef if it dies. They will spend time looking for something else to inhabit as they do not have the limbs necessary for an active life. Some reports suggest they sometimes live on giant clam species in Thailand.

Their most common predators are shrimps, crabs, and sea urchins. Some tropical reef fish eat them, especially the butterflyfish. Usually, their predators eat their plumes, and if some parts remain, they will regrow within a few weeks.

Christmas tree worms respond quickly to disturbances by retracting into their tubes. They will withdraw if they sense a shadow, light changes, touch, or motion and protect themselves with their spiny operculum. They remain withdrawn until the perceived danger has passed. However, they often lose appendages to fish biting them before they withdraw. 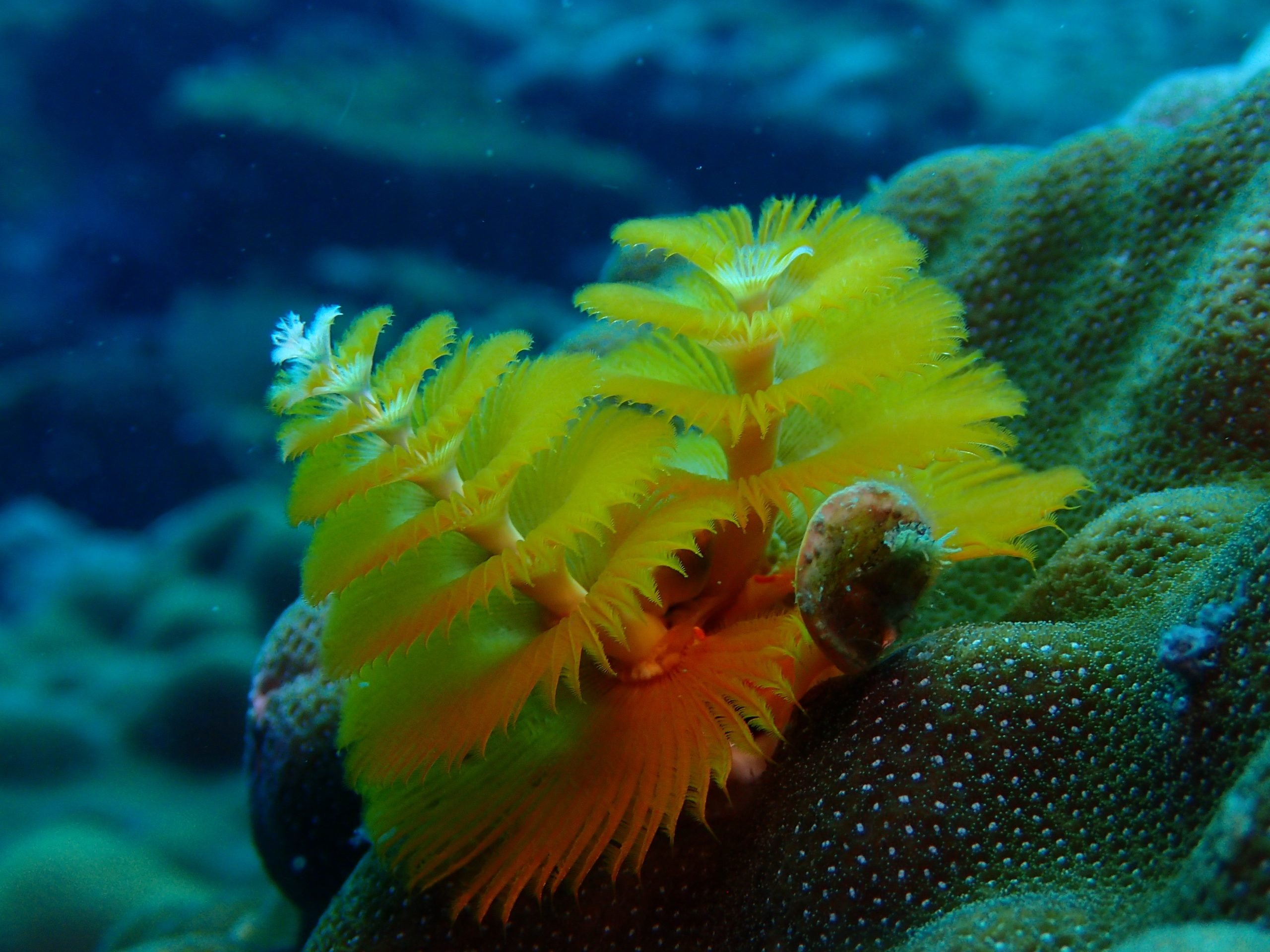 At this time, Christmas tree worms have a stable population, and no conservation efforts are in place. While the worms themselves are not at risk, some of their habitats require conservation laws.

They observe and study coral reef ecosystems to detect what contributes to bleaching events, and they remove debris to help restore the damaged reefs. NOAA also works to outplant lots of corals at a time to increase populations.

While not entirely conclusive, Christmas tree worm populations do indicate the health of a coral reef. If the reef can support many organisms, then it is healthy. Coral reefs are more likely to recover if Christmas tree worms inhabit them as they protect the coral from predators.