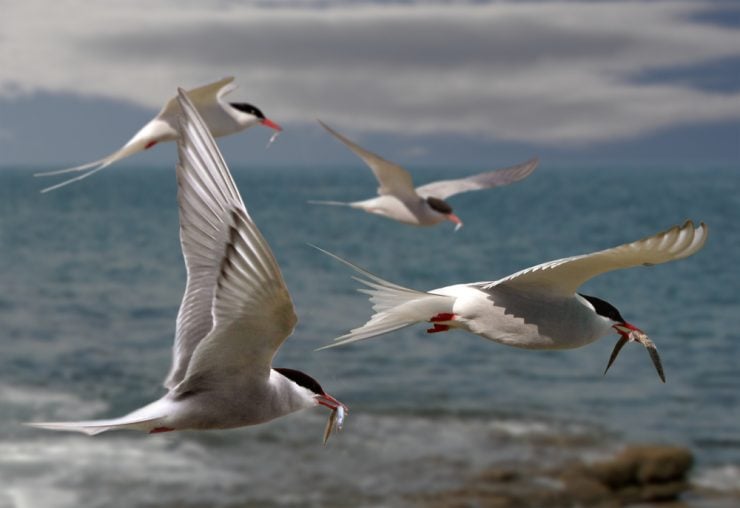 Arctic terns live throughout the Arctic and various areas in Asia, Europe, and North America during their migration. Known for its white and black feathers and red legs, this bird can live to be over 30 years old, an impressive age for the avian world.

To keep themselves warm and energized throughout the year, Arctic terns must eat a specialized diet. If you’ve ever wondered what do arctic terns eat, you’ll want to keep reading. This article will explore a few of their favorite meals.

Arctic terns need to consume plenty of food to keep their body active and healthy, some of which are listed below.

An Arctic terns’ diet mainly consists of small fish like:

While they will sometimes eat adult species, they mainly focus on immature fish that are smaller and easier for them to chew and swallow.

When they catch a fish, the Arctic tern will grasp its body with its beak. Sometimes the bird might also pierce the prey’s body with the tip of its beak for a better grip.

Crabs might seem like they would be too big for this bird, but Arctic terns easily catch and eat them. To find crabs, they will hop along the shoreline, searching for those washed up during the tide or hiding in the sand.

Once they catch one, an Arctic tern will grab the crab’s body and quickly smash it against a hard object. It will instantly kill the crab and allow the Arctic tern to reach the meat inside.

As with most seabirds, krill is a diet staple. While krill is somewhat small, it’s packed with fat and other essential minerals the Arctic tern needs for survival.

When it spots a large group of krill, this bird will swoop down into the water and gulp them down.

You might be surprised to learn that Arctic terns enjoy eating berries. On occasion, this bird will turn to berries when they nest during mating season. This way, they can get a quick meal in without being away from their eggs too long.

Another essential part of an Arctic terns diet is mollusks. Arctic terns will use their long beak to puncture the shell so they can eat its flesh.

While mollusks are easy to find, some camouflage themselves well on rocks or in the sand, to find them, the Arctic tern will use their beak to poke around the areas to determine where they might be hiding.

This bird will also snap at insects that float above the water’s surface. It is mainly during the summer when insect populations are abundant. However, Arctic terns don’t rely on insects as a full meal, but rather as a snack.

Arctic terns need to eat a specific diet so they can stay active and healthy. Whether it’s krill or berries, they have a vast palate that changes depending on the season.