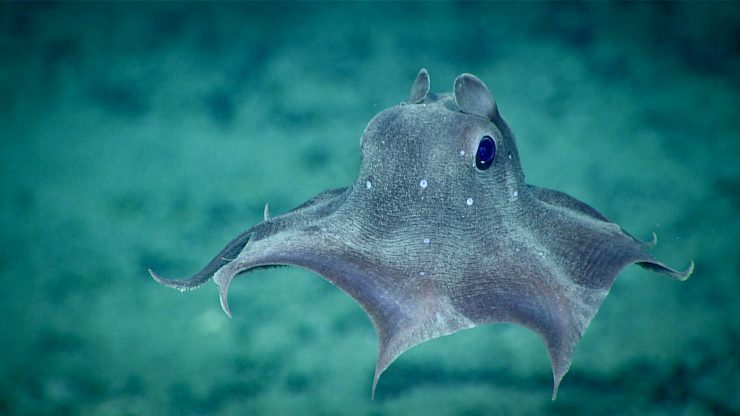 What Do Dumbo Octopus Eat?

The Dumbo octopus is a unique creature. While it has eight arms beneath its mantle like other octopus species, it’s what’s above that makes it so attractive. Like their Disney namesake, a Dumbo octopus has large fins protruding from both sides of its mantle. It’s these ear-shaped fins that give these creatures their name.

Even though a Dumbo octopus does have a unique appearance, its diet is still similar to other octopi types.

What Does a Dumbo Octopus Eat?

A Dumbo octopus lives in a harsh environment. The sea creatures are found at depths ranging from 9,800 ft to 23,000 ft. The water is dark and freezing at these depths, and the pressure is too great for most other life forms to survive. It dramatically limits what a Dumbo octopus has to dine on.

When a Dumbo octopus feeds, it glides above the seabed. Using its eight tentacled arms, the octopus sweeps the area around it, looking for prey. Since food sources are scarce at the depths Dumbo octopi live, the creatures aren’t picky about what they eat.

There’s an advantage to living on the ocean floor. Dumbo octopi don’t have to worry about many natural predators. The downside is food sources are scarce, so these creatures can’t afford to have finicky appetites; they’ll nibble on copepods, isopods, amphipods, and bristle worms.

These oceanic creatures do not have teeth, so they swallow their prey whole. It limits the size of what they can eat to around 1-2mm. Anything larger than the octopus will have difficulty swallowing and digesting.

Along the seafloor, where a Dumbo octopus has few predators to worry about,  they’ll scope up worms, and various types of small crustaceans lie snails during the day. Bivalves are also on the menu. These are aquatic mollusks that are encased in a hinged shell.

Clams, scallops, oysters, and mussels are classified as a bivalve. The octopus will swallow everything, including the shell, before moving onto new prey.

At night, when it is harder for predators like whale sharks and sea birds to see, Dumbo octopi will float to the surface to feed on copepods. Part of the zoo-plankton family, the small cephalopods will scope the plankton up as it propels itself through the water with its ear-shaped fins.

Dumbo Octopi and the Food Chain

These are the smallest known species of octopi with an average length of eight to 12 inches long. Their small size and short tentacled arms do put the creatures at a disadvantage on the food chain. However, due to the depths they thrive at, there are very few predators a Dumbo octopus worries about until it floats near the water’s surface.

Their small size also means that even though they have the same voracious appetite as larger octopi, they aren’t as likely to dent in the food chain supply. It seems like these “adorable” octopi have found an ideal niche to exist in. It’s one with a steady supply of small crustaceans, worms, and plankton that often floats by on the current.