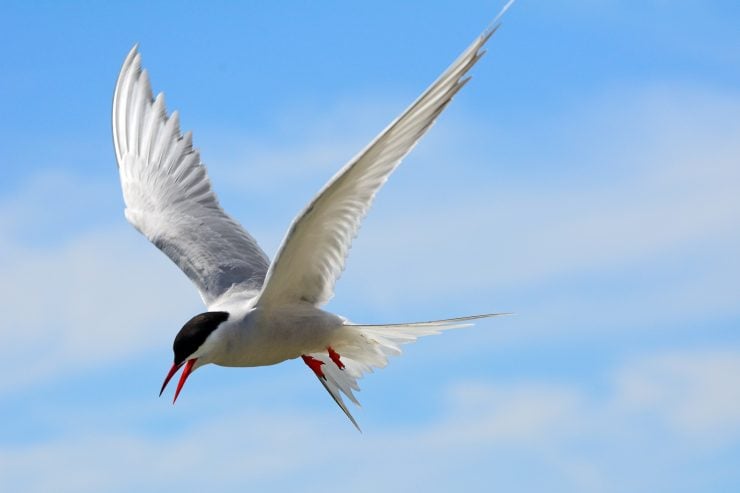 The Arctic Tern, known by the scientific name Sterna paradisaea, is a migratory bird with one of the largest geographical ranges of any animal species on Earth.

These birds are plentiful throughout both the Arctic and Antarctic poles, where they make their homes. While they are currently classified under “least concern” by the IUCN Red List, the Arctic Tern faces major future threats due to climate change.

Arctic Terns weigh just three to five ounces as adults, and they average between 13 and 14 inches long from tip to tail. However, their wingspan is over twice the birds’ body length on average, at 30-33 inches. 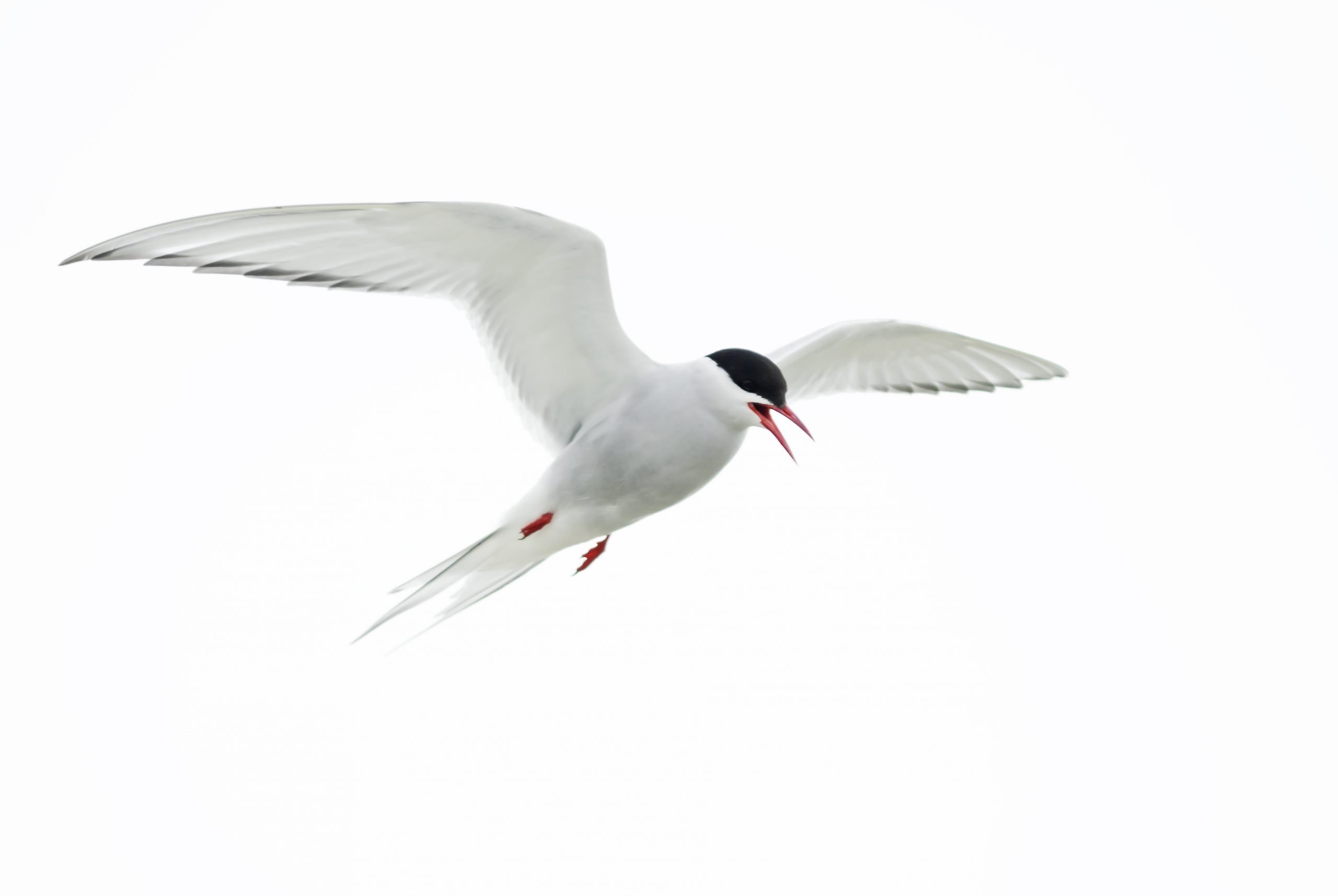 The arctic tern’s main characteristics are its enormous, easily-distinguishable wings and long tails. Their tails are V-shaped with extensive streamer feathers in adults, and their wings are long and thin. These long wings help the tern glide nearly effortlessly over updrafts and air currents, saving precious energy during their migration.

The Arctic Tern is a medium carnivorous bird with a greyish-white body, a black head, and dark wingtips. Young arctic terns are born either grey or brown, but all adults will develop into the same white-grey color pattern with black cap and wings. Arctic terns also look very similar to the Common Tern and Roseate Tern but have longer tails and wings. 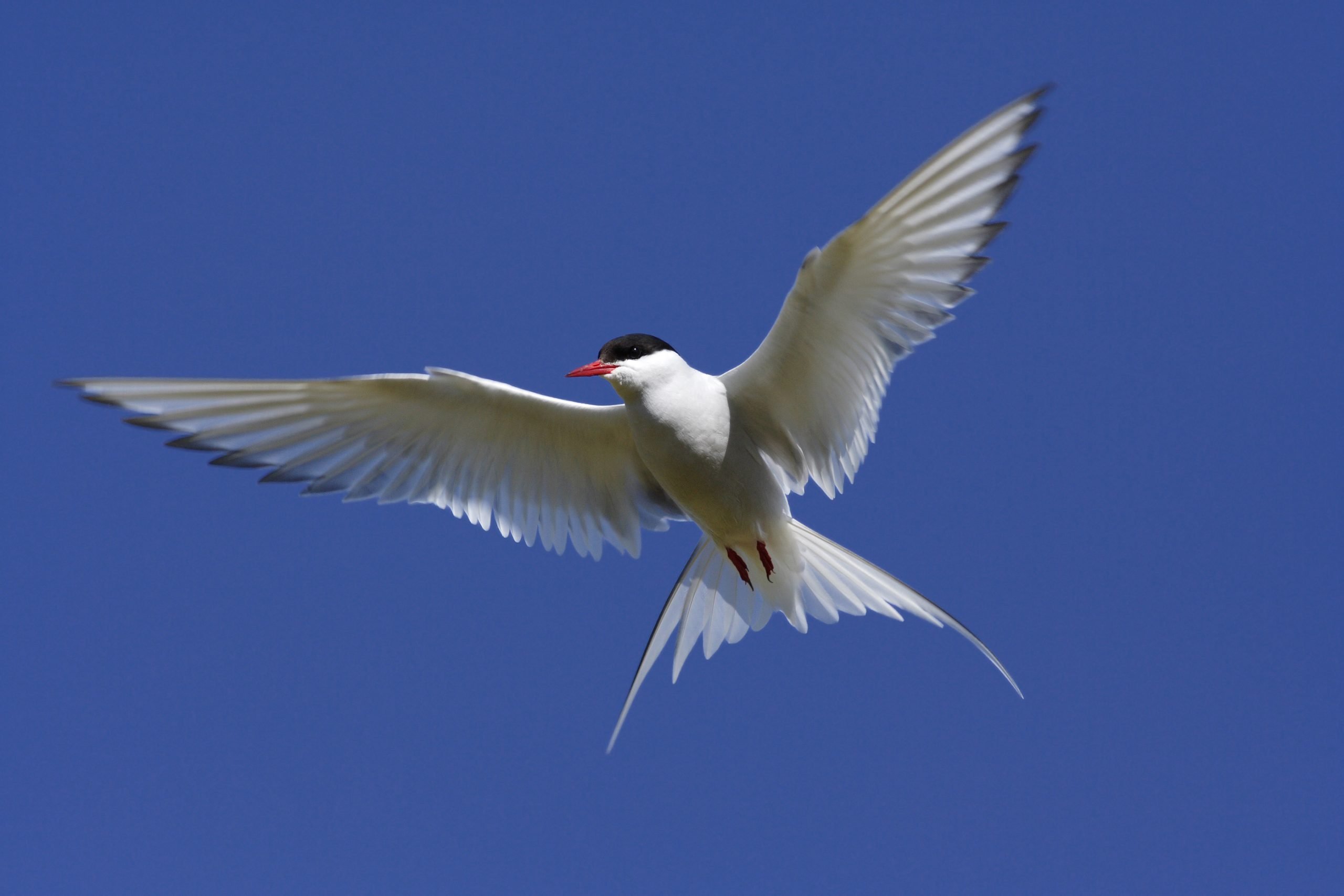 Arctic terns are a surprisingly long-lived migratory bird, with more than 82% of the population surviving each year. Arctic terns often live to be more than 30 years old, and they mate for life, returning to the same group colony each year.

When a young adult enters the breeding season for the first time, it will participate in mating rituals to attract a partner. First, a female tern chases the male to a high altitude, and then the two slowly descend; this is called a “high flight.” After that, the male will offer fish to the female in a series of “fish flights.” If both are successful, the birds will circle each other in acceptance and agreement.

After this, they will select a nest site together. Both parents protect and rear the chicks, and while most terns lay two eggs, they can also lay one or three. The eggs take 22-27 days to hatch. 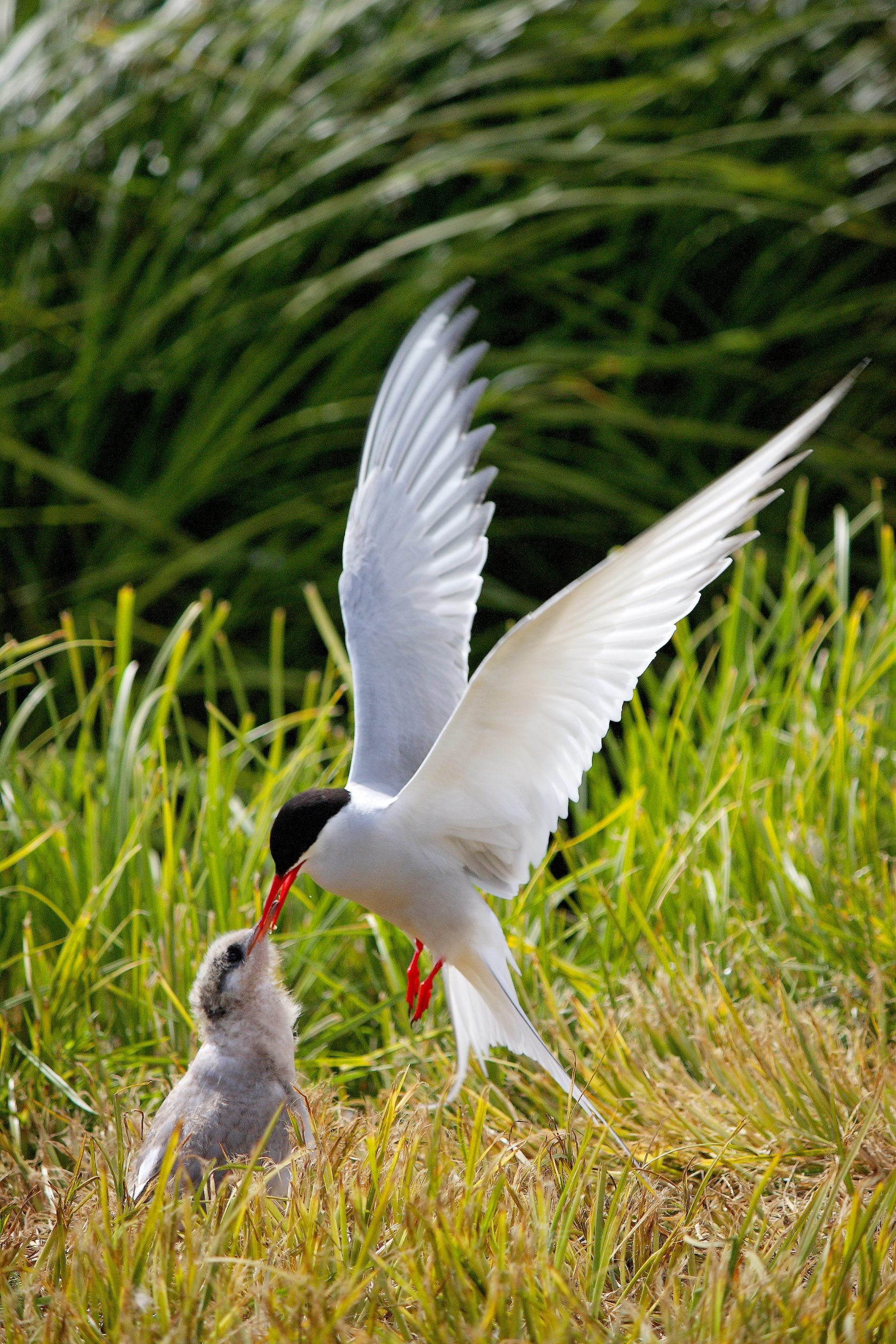 Where Does the Arctic Tern Live?

Because the Arctic Tern is both very common and highly migratory, it visits most major continents (and many smaller ones) at some point during its lifetime. However, the only places where the Arctic Tern truly “lives” are its northern breeding grounds and the Antarctic coast.

Arctic Terns migrate and travel about 40,000 miles every year. After the nesting period ends, all of the birds in one colony will simultaneously leave for another worldwide migration.

The Arctic Tern lives across a diverse geographical range, but they tend to stick to coastal and ocean habitats as a general rule. During the summer in the north, the Arctic Tern lives in North America and Eurasia’s coastal temperate regions. They follow the summer season as it moves south, eventually residing around the Antarctic ice and the surrounding sea.

Throughout the Arctic Tern’s migration, it sees a total of two summers. This is because it follows the summer season from the northern hemisphere to the southern hemisphere and back again. 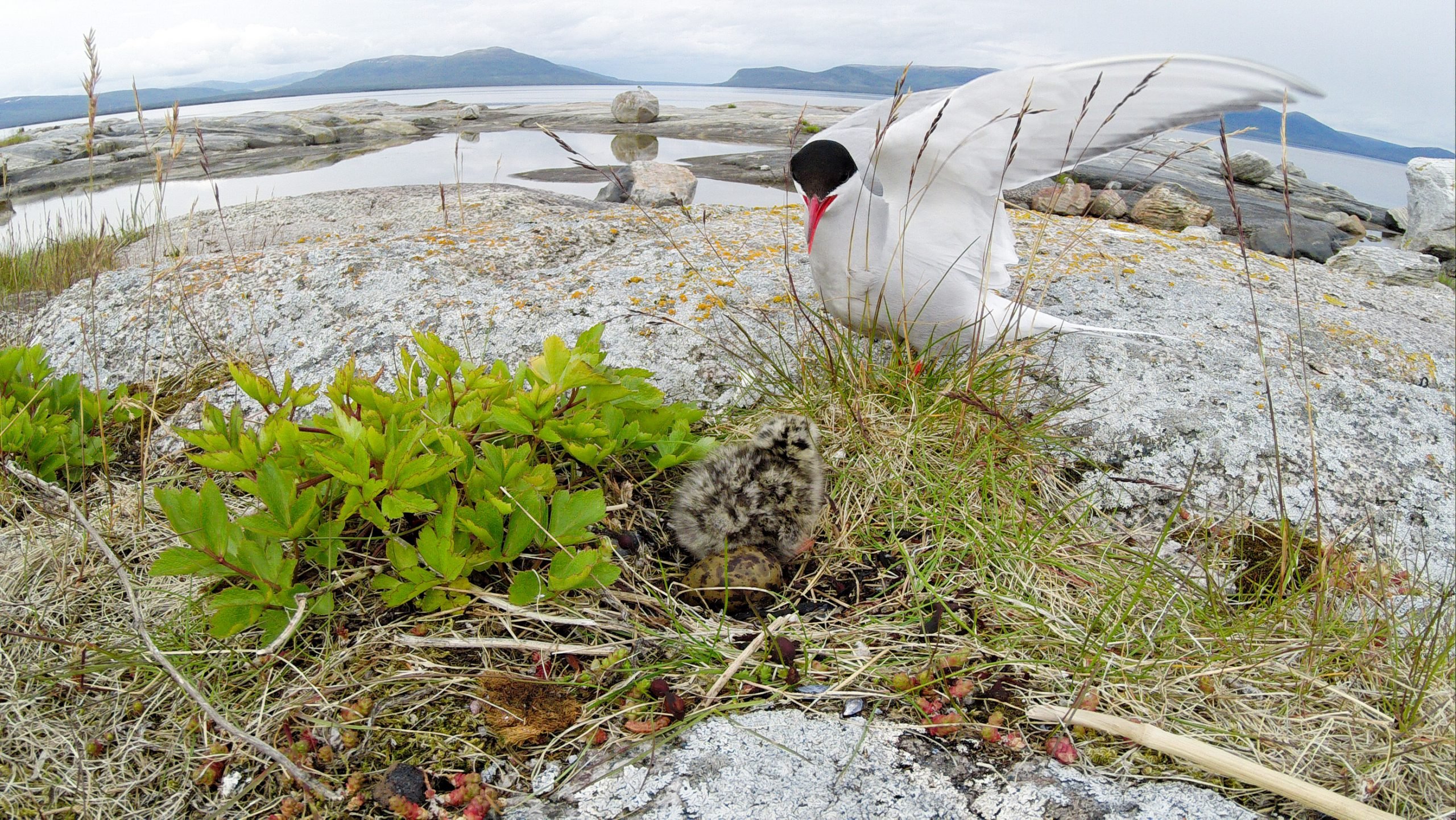 What Does the Arctic Tern Eat?

The Arctic Tern relies on fish and easily-accessible marine crustaceans for the vast majority of its diet. Most of the fish they eat are immature, shore-dwelling juveniles of larger ocean species, such as capelin, cod, and herring. They will also eat krill and crabs when the opportunity presents itself

Arctic terns are resourceful eaters and opportunists. When fish and crustaceans are scarce, they’ll turn quickly to other available food sources, such as berries, insects, mollusks, and marine worms.

While the Arctic Tern is technically mostly carnivorous, what it eats depends on where it is at in its migratory cycle and what food is available.

For example, during its winter migration to the Antarctic, its diet is made up almost exclusively of readily-available fish, which it dives shallowly into the water for. However, during the tern’s nesting period in the Arctic, it may accept nearby berries and plentiful insects as alternative food sources.

Fascinatingly, Arctic Terns are not afraid to “startle” other terns into dropping or abandoning their food and taking it for themselves and their families. This is a practice called kleptoparasitism. 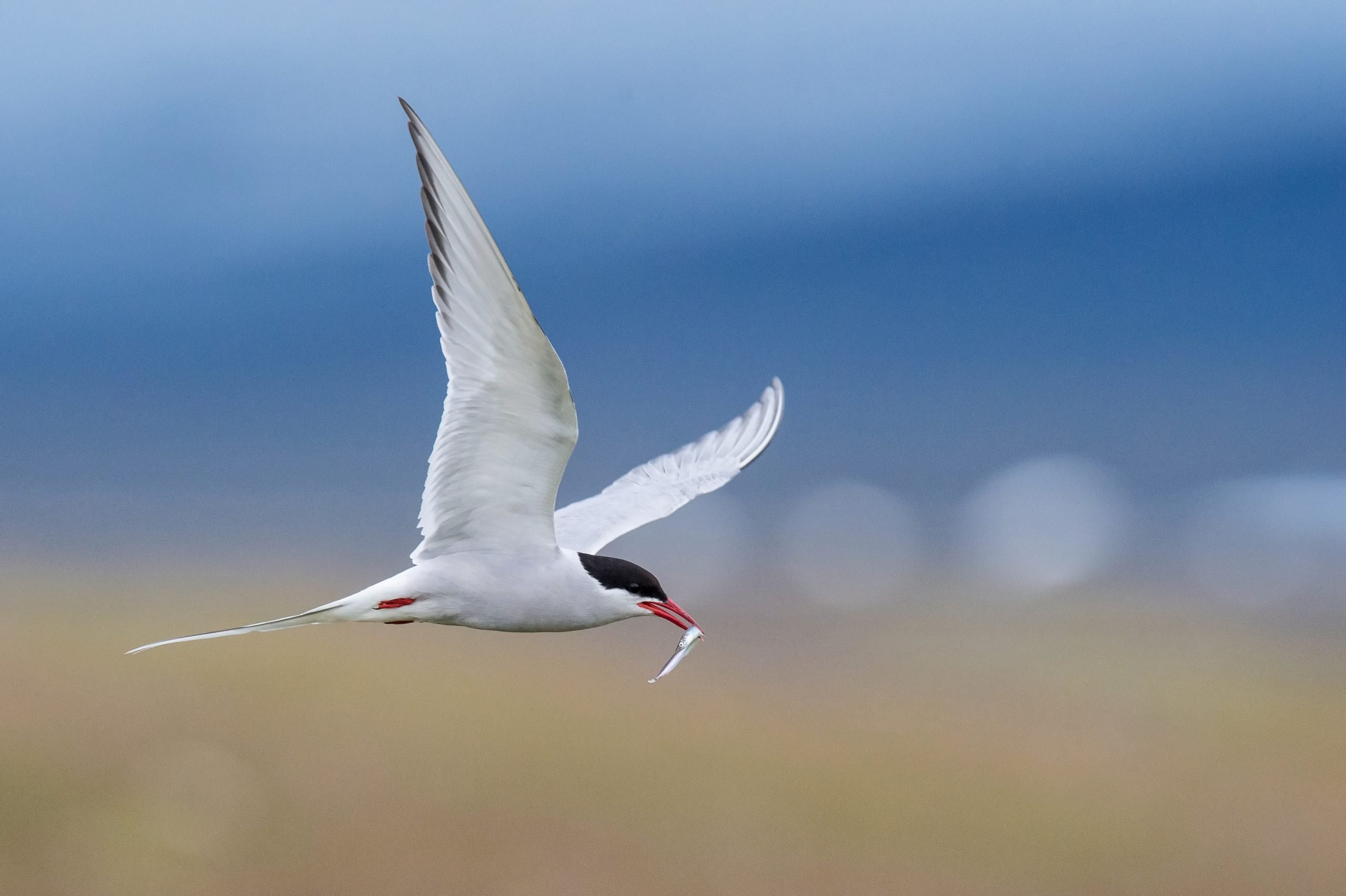 While the Arctic Tern is currently relatively secure in the wild, it faces growing environmental destruction concerns through climate change and a few other factors.

In some areas of the world, such as New England and Greenland, the local populations of Arctic Terns have reduced significantly due to hunting, trade, and exploitation. However, human exploitation in specific regions is not a significant risk to the overall population because of the species’ global reach.

Human hunting has always been a concern for certain geographical pockets of Arctic Terns. While it doesn’t usually impact the overall population, it could cause small-scale ecological issues for isolated populations.

Climate change and global warming are the most significant current threats to Arctic Terns. These birds could lose up to 50% of their present habitats in the future due to climate change. Warmer weather is causing the fish that Arctic Terns usually feed upon to venture further from the shore, making it more difficult for the terns to find and eat during the mating season.

Arctic Terns are also threatened by severe storms, which can upset their migration schedule, delay breeding, and even destroy nests with eggs. If climate change impacts the availability of the tern’s alternative food sources, scarcity may become a mounting issue, as well. 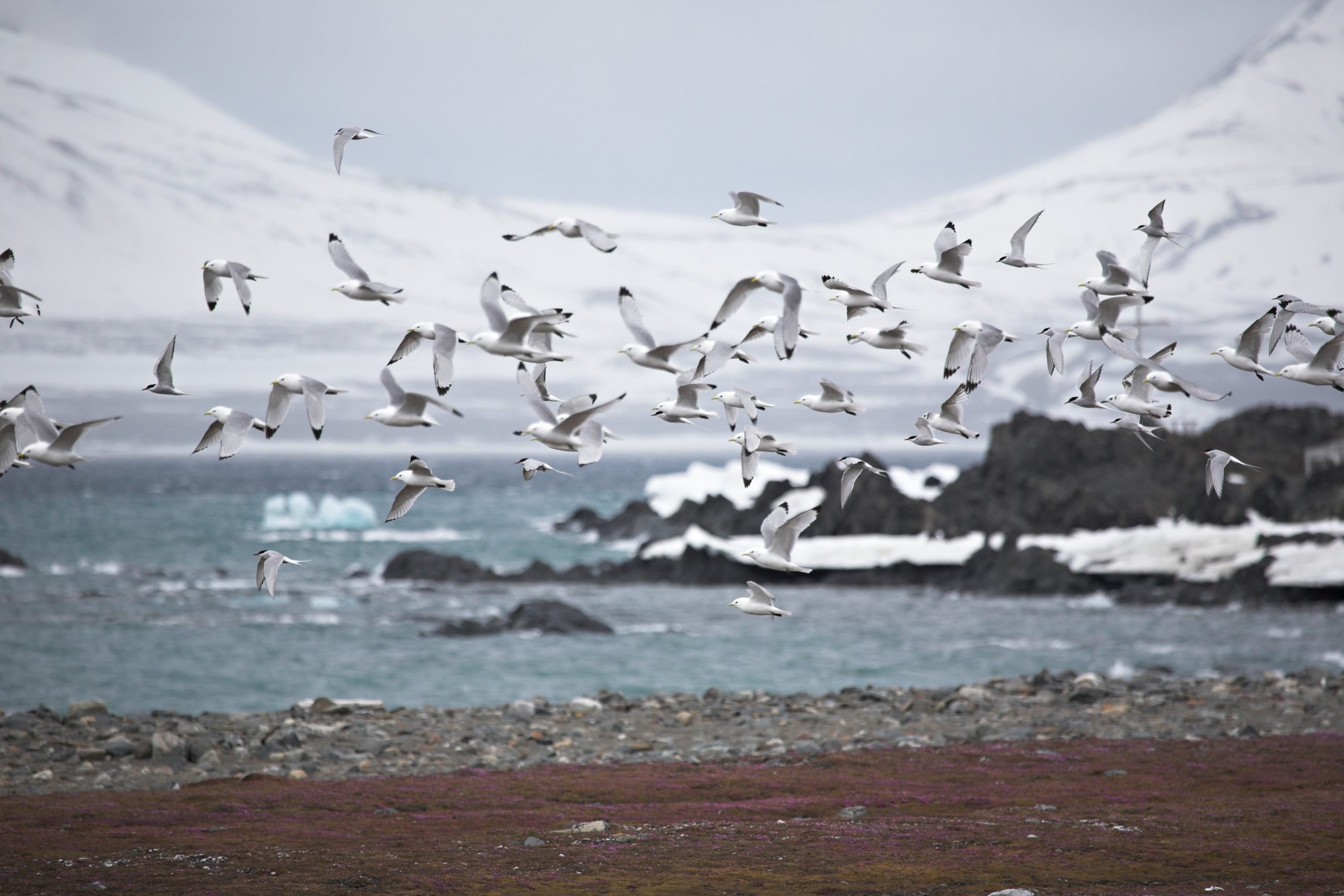 Besides humans, the Arctic Tern’s most problematic predators are small carnivores. Because of the Arctic Tern’s enormous range, it can face different predators throughout its migration. Cats, rats, and hedgehogs are all known predators that wreak havoc on Arctic Tern populations, but their worst predator of all is the American Mink, an invasive species common in its nesting grounds.

Other predators that can cause trouble for the Arctic Tern are snakes, raptors, polar bears, and foxes. In the Antarctic portion of the terns’ migration, seals and other marine predators can also be risks.

Habitat destruction not caused by climate change can be an issue for Arctic Terns, too. For example, Alaska’s coast is a preferred habitat for nesting terns, and oil drilling along the coast can destroy the birds’ favorite nesting spots.

Currently, the Arctic Tern is classified under “least concern,” but that doesn’t mean that conservation efforts are unnecessary. In certain areas, such as Greenland, Iceland, and New England, the species is considered Vulnerable or Threatened and conservation of this wildlife is key.

The Arctic Tern is protected under the AEWA.