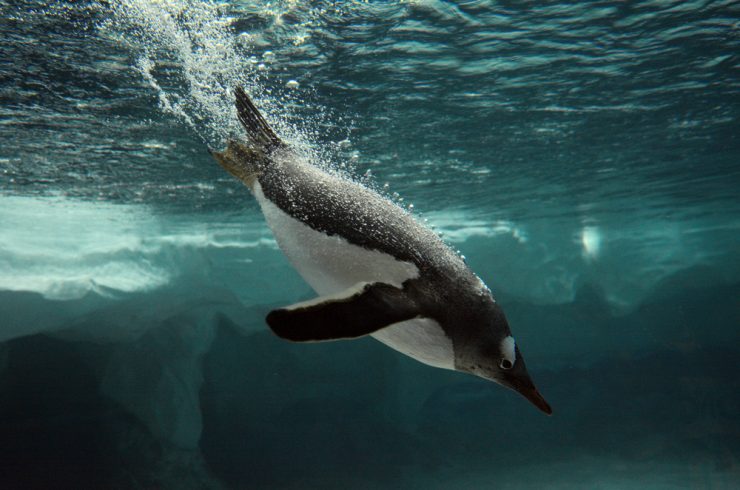 What Do Gentoo Penguins Eat?

Gentoo penguins are one of the largest penguin species in the world. They are also some of the fastest, with an impressive swimming speed of 22 miles per hour.  So what do gentoo penguins eat?

Situated around Antarctica and the Falkland Islands, Gentoo penguins get their name from the Latin word meaning “brush-tailed.” This name is in reference to their large tail, which swings from side to side as they waddle.

One of the most interesting aspects of Gentoo penguins is their diet. Below you’ll find more information about what this creature enjoys munching on.

Gentoo penguins have a vast appetite, but they mainly eat three types of food.

To prevent the fish from slipping out of their grip, Gentoo penguins have small bristles on their tongue. These bristles slightly puncture the fish’s skin, so it doesn’t escape.

Because fish populations increase during the summer, a Gentoo penguin’s diet will mainly be fish this season.

Squid is another significant part of the Gentoo penguin’s diet during the summer. To catch a squid, the penguin will look closely at where the squid is located, jump into the water, and quickly swim to where they are. Because a squid tends to be a bit bigger than a penguin, most will pursue it in groups.

These crustaceans make up a smaller portion of the Gentoo penguins’ diet. They are a filling meal for the penguin and provide them with plenty of vitamins and minerals for energy. These options also infuse the penguin’s body with omega-3, helping them stay warm and healthy. Female penguins eat more krill than the males, however.

How Much Food Do Gentoo Penguins Eat Each Day?

While a somewhat small Arctic bird, the Gentoo penguin has a voracious appetite. It’s thought that they will make about 450 swims per day in search of food.

How Do Gentoo Penguins Hunt for Food?

Sometimes other penguin species will work alongside Gentoo penguins to catch prey. Because Gentoos tend to stay in shallow water, penguins will nudge deepwater prey toward this area. As it arrives in the Gentoo penguin territory, they will chase it.

Gentoo penguins are one of the world’s most stunning creatures. While they might look small, they have a healthy appetite, especially for fish, squid, and shrimp/krill. These items give them the necessary energy to stay warm in the chilly Antarctic.