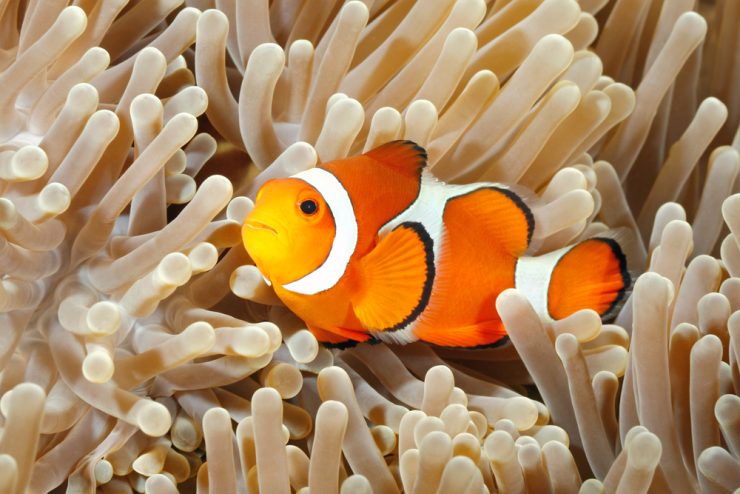 In a coral reef, the clownfish’s distinctive orange and white stripes make them easy to recognize.

In the ocean’s ecosystem, these fishes are fascinating and unusual. Continue reading to learn more about them so you can impress your kids with your in-depth knowledge of these attractive swimmers.

Because of their vivid orange color and white stripes, they are easily identified. They reach a maximum size of 10cm, with female clown fishes being larger than males.

On average, their bodies are a little over 3 inches long, but they can grow up to 4 inches long.

Clownfish live for roughly 8 years in the wild and up to 12 years in captivity.

All clownfish are born male, which is surprising. They have the ability to change their gender, but they will only do so to become the dominant female in a group. The transformation is unstoppable.

If the female dies, the male of the mating pair transforms into a female and grows rapidly in size. The breeding male is normally the next largest male.

Clownfish can be found in coral reefs in the Indian Ocean, Red Sea, and western Pacific. They can also be found off the shores of Australia and Southeast Asia, as well as in the southern Japanese waters.

The Caribbean, Mediterranean, and Atlantic Oceans are all devoid of them.

Where Do Clownfish Live?

Before taking up residence, clownfish undertake an elaborate dance with an anemone, softly brushing its tentacles with various areas of their bodies until they are habituated to their host.

The sting of the fish-eating anemone is rendered ineffective by a covering of mucus on the clownfish’s epidermis. In exchange for protection from predators and food scraps, the clownfish chases away intruders and parasites from its host.

Clownfish, despite their adorable appearance, are omnivores, meaning they eat both meat and plants. Crustaceans, algae, zooplankton, and worms are all known to be eaten by them.

As is true for most marine animals, the clownfish faces several different threats to its existence.

Human threats represent a significant danger to the clownfish. In recent years, the internet has caused the species to become very popular, although its fame has been detrimental.

Many people want to add them to their aquariums, leading to an increase in their appearance in the exotic pet trade.

Climate change is an additional threat the clownfish faces. More specifically, they are adversely affected by ocean acidification, which is caused by the increase of C02 in the atmosphere. Ocean acidification reduces the numbers of coral reefs, eventually harming clownfish populations.

Clownfish don’t have many predators because they spend much of their life in anemones that lethally sting other marine species. They are generally hunted by larger fish when they leave their homes.

Clownfish sales have risen as a result of the renowned Pixar film “Finding Nemo,” according to National Geographic, despite the fact that they are not on any endangered species lists.

Conservationists are concerned that some places have been overfished to fulfill the demands of these “aquarium fishes.”

According to livescience.com, the destruction of coral reefs due to pollution and human involvement has resulted in a fall of these species.