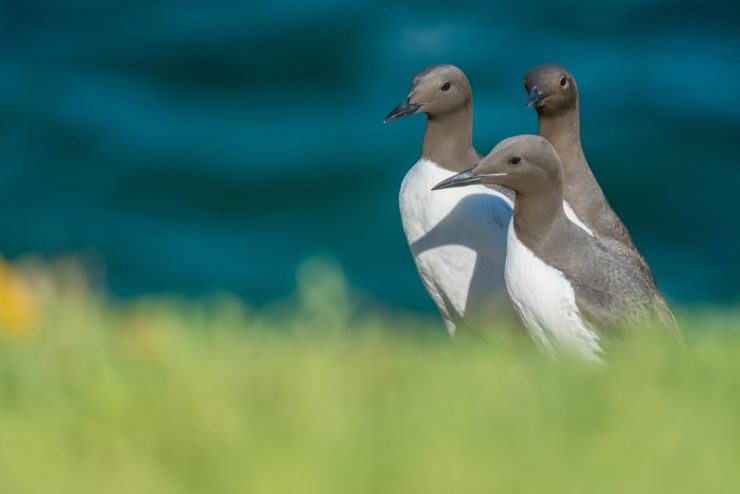 The Common Murre, or Common Guillemot, whose scientific name is Uria Aalge, is a thin-billed murre located in North America. The Murre is akin to the auk or alcid, belonging to the family of Alcidae birds.

The Common Murre seabirds are black and white at birth, weighing approximately 775 to 1,250 g, or 1.7 to 2.7 lbs. This large seabird sits upright on the sea cliff, closely resembling the Northern penguin.

The Common Murre has a black head, white underbelly, and a thin dark, pointed bill. Birds of this species are more typically dark brown than black. Upon the first prebasic molt, the face turns white. As the bird matures through adulthood, its appearance changes.

The Common Murre ranges approximately 15-18 inches in length (38-46 cm), and its wingspan measures 24-29 inches (61-73 cm). Both female and male birds appear very similar in both weight and length.

The Common Murre are seabirds recognized by their signature black-and-white appearance. At birth, both male and female birds feature black on their back, head, and wings, with white underparts.

It has a thin dark, pointed bill and a small rounded dark tail. Both males and females feature a white face with a dark spur behind the eye.

First-year birds go through the basic plumage in May. Alternate plumage occasionally maintains some white feathers around the throat.

A few Common Murre, located in the North Atlantic, also known as “bridled guillemots,” feature a white circle around the eye that extends down toward the back as a white line.

Contrary to popular belief, the defining characteristic doesn’t make this a subspecies. But rather, this is a result of polymorphism, or the occurrence of different forms among the members of a population or colony or in the life cycle of an individual organism.

Common Murre chicks are fluffy with dark-colored, typically black, feathers on the top and white underneath. Once they reach 12 days old, the contour feathers become more developed all over except the head. After the 15-day mark, the chick’s feathers along the face begin to show a dark stripe against the white cheek and throat.

The Common Murre’s lifespan is about 20 years. They breed in colonies, they don’t make nests, and nesting pairs are in bodily contact with their surrounding birds. Birds incubate a single egg upon a large rock on cliffs. Eggs hatch after about 30 days of incubation.

Occasionally, the seabirds are spotted in large harbors or bays. During the non-breeding season, the Common Murre is mostly found in the water.

Where Do Common Murre Live?

Common Murres live along the Pacific Coast, favoring cool northern waters. Their habitat ranges from Alaska to California, but they are more commonly found off the eastern cliffs of Canada.

The Common Murre feeds mostly on fish. Their diet consists of sand lance, haddock, cod, herring, capelin, and others. They also feed on a variety of squid, mollusks, marine worms, and crustaceans.

What Do Common Murre Eat?

The Common Murre consumes small forage fish, usually less than 8 inches in length, with their favorite food being capelin and sand lances.

In 2003, the Common Murre began eating snake pipefish. Since then, the delicacy has become part of their normal diet, specifically in the North-east Atlantic and the North Sea, while sand eel numbers decline.

Though these seabirds are currently not under threat of extinction, they’re still impacted by certain environmental changes, specifically pollution and oil spoils.

The seabirds are most susceptible to oil spills along the Washington coast. Other human threats to the Common Murre population are overfishing and gill nets.

Large oil spills have the potential to double mortality rates or breeding adults but have no effect on birds under the age of three.

Likewise, the Sea Birds Preservation Act of 1869 in the UK aimed to protect these birds and their eggs from potential shooting and collecting during the breeding season. Continued concerns lead to tourist restrictions to maintain the safety of wildlife reserves where Common Murre’s reside.

As climate change and global warming worsen, our oceans continue to suffer from the effects of frequent marine heatwaves, like “the Blob.” The international Oceana organizes campaigns to restore the oceans to their normal state.

The Common Murre population experienced a sudden decline due to the 1982-1983 El Niño, which was the strongest and most devastating in history. The population dropped from 30,000 to less than 3,000 birds.

In 2014, the extreme heatwave that occurred in the Pacific Ocean — better known as the Blob —  resulted in the death of over one million Common Murre seabirds throughout the U.S. West Coast.

Common Murre chicks typically fall prey to gulls and other avian predators, but Grey Seals and California Seal Lions are among the most dangerous of predators.

Due to the 2014 heatwave, the Common Murre in the northeast Pacific and the southeast Bering Sea experienced chronic reproductive failure, which resulted in the noticeable drop off of birds.

The Common Murre in the Atlantic and Pacific oceans also experience irregular die-offs on wintering grounds, stormy conditions, or other circumstances resulting in lack of food.

The Common Murre are often victims of oil spills. They’re also disturbed by aerial and boating to aerial and boating interferences, causing them to flee in fear and deserting their eggs which are at risk to various flying predators.

Food depletion and climate changes cause Common Murre numbers to fluctuate annually, but overall, their conservation status is “least concern,” and they’re currently under no global threat.

Over 140,000 square miles of crucial seafloor ecosystems experienced negative effects by the Blob, which Oceana works to protect. With the help of supporters and activists, Oceana secures safeguards for hundreds of forage fish species critical to marine life like the Common Murre’s diet.

Since the 1983 El Niño event, some Common Murre populations have experienced recovery, but other inhabitants have yet to make an appearance. The current seabird population in Washington is at about one-third of the preexisting figure.

Human disturbance also has a negative impact on the population. Whether on boat, foot, or a low-flying plane, Common Murres are highly sensitive.

When they’re disrupted, the birds react out of fear and either flee the scene, leaving their chicks or eggs in the nesting site, or knock the eggs out of the nest, making easy prey for gulls and other avian predators.