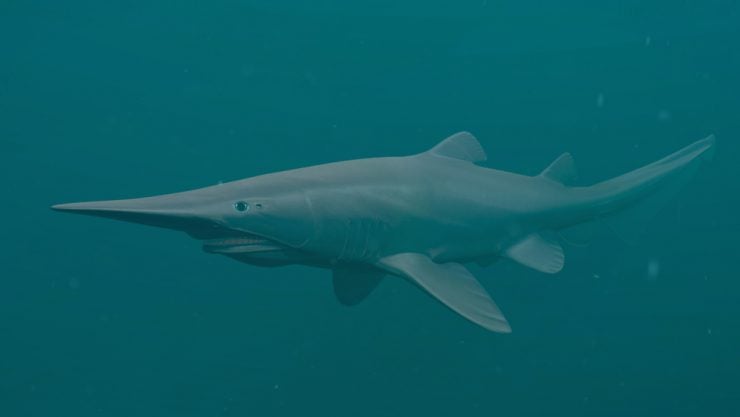 One of the creepier fish is the goblin shark (Mitsukurina owstoni). It has a long, prominent snout which is covered in specific detecting organs (ampullae of Lorenzini) that allow it to detect electric fields in the deep, dark water where it lives. It also has a distinctive color that ranges from pinkish grey to purplish grey, with vivid blue at the fins’ edges. Its jaw, on the other hand, is even stranger. It can be extended to the length of the goblin shark’s nose to help the goblin shark ambush fish, squids, and crustaceans, albeit it is near to the head in this picture.

Because goblin sharks are rarely seen in the wild and nearly never filmed, most of what scientists know about them comes from their inadvertent capture in fisheries aimed at other species. They are said to be active predators that eat a variety of fish, squids, and pelagic crustaceans. They hunt by detecting prey beneath their sensitive rostrum and grasping it with their jaws extended far from their mouths. They resemble something out of an alien movie rather than a shark when feeding in this manner.

Internal fertilization is used by goblin sharks to mate and give birth to a small number of potentially large pups. Despite the fact that they give live birth, these sharks do not have a placenta to connect them to their offspring. Instead, throughout the gestation stage, the mother most likely feeds her unfertilized eggs to her young, which they actively devour for nutrition. Young goblin sharks are ready to hunt as soon as they are born. The goblin shark is not commercially fished, and it is only caught inadvertently in fisheries aimed at other species. Scientists believe the goblin shark is a species of least concern, according to a new study.

In fact, because their jaws protrude out at varied lengths, several preserved specimens of goblin sharks were sometimes wrongly classed as separate species.