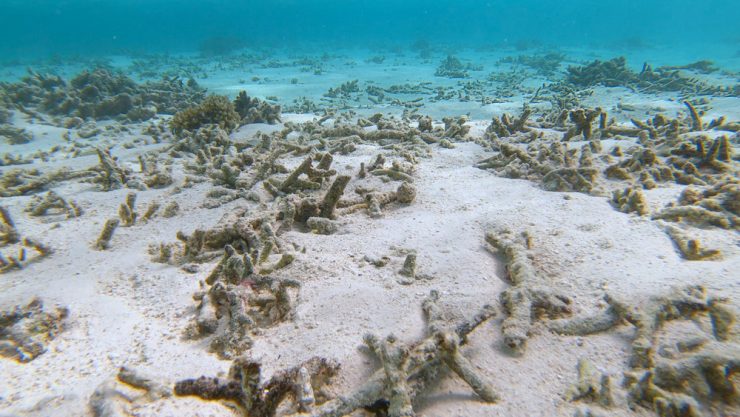 Climate change is the first and foremost threat to coral reefs and their surrounding ecosystems. Scientific studies have been conducted that indicate that the Earth’s atmosphere and ocean are rapidly warming due to greenhouse gases generated by human activity.

What Does Climate Change Lead To?

Climate change leads to a warming ocean first and foremost. This causes thermal stress that contributes to coral bleaching and infectious disease. Coral bleaching is when corals become stressed by changes in conditions such as temperature — this is when they expel the symbiotic algae living in their tissues, causing them to turn completely white. Bleached coral reefs look strangely like underwater graveyards.

Climate change can also lead to a rise in sea level. This leads to increases in sedimentation for reefs located near land. Sedimentation, or erosion from nearby shorelines that have suddenly been submerged, can runoff into the ocean and lead to coral reefs becoming smothered.

Storm patterns and precipitation changes may also affect the growth and wellbeing of corals. Stronger and more frequent storms can lead to the destruction of coral reefs that are unequipped to withstand such brutal battering. Increased runoff of freshwater, sediment, and manmade pollutants contribute to deadly algal blooms that make water murky and reduce the amount of sunlight a reef needs to survive.

Climate change can also alter ocean currents that corals rely on to disperse offspring. The currents regulate temperature and many coral reefs have adapted to living within a certain temperature that can be changed drastically by the movement of a current.

Burning coal, oil, and gas adds carbon dioxide to the atmosphere. The ocean water absorbs this carbon dioxide from the air — and when it enters the ocean, it can make the water more acidic. This process interferes with the coral’s ability to grow and thrive. This is when corals begin to die.

Global warming, the main cause of climate change, is most notably caused by manmade factors such as factory farming, burning fossil fuels, and deforestation. All of these events that might not happen anywhere near the sea can still contribute to the mass death of corals and the ecosystems around them.

How Do We Help Dying Corals?

Many coral reefs are already dead and beyond the point of revival. There are still a few ways to help and restore the ones remaining.

Scientists all over the world are actively restoring coral reefs on a global scale. Corals are grown offshore in labs and sent out to be rehomed on carefully selected sites. The Coral Restoration Foundation has returned more than 130,000 critically endangered corals back to reef sites all around the United States. Many of these corals have grown into fully functioning colonies with the ability to spawn and do what the bleached corals could not: survive.

As citizens we can help to save corals in all kinds of ways. We can reduce our use of lawn and garden chemicals in an effort to keep these chemicals out of the global water supply. We can choose sustainable seafood — seafood grown in fisheries, not tropical fish taken from coral reef systems. Coral reefs and their inhabitants are often symbiotic partnerships. The reef offers shelter, and the fish offer sustenance.

We can also learn about good reef etiquette — this goes for divers, swimmers, tourists, vacationers, and locals alike. Do not step on or touch corals unless absolutely necessary. There are even some types of sunscreen that might come off in the water and harm corals — nowadays several companies make “coral-safe sunscreen” in order to encourage folks to be knowledgeable about what they are bringing into the ocean.

Climate change is the greatest threat to coral reef systems and has destroyed many of them, far more than we can count. But there is always a way to save them, and we all can take steps in the future to ensure the wellbeing of these vibrant ecosystems that are so vital to so many creatures in so many different ways.

Everything You Need to Know About Microplastics in Our Oceans

What Are The Different Types of Grouper?