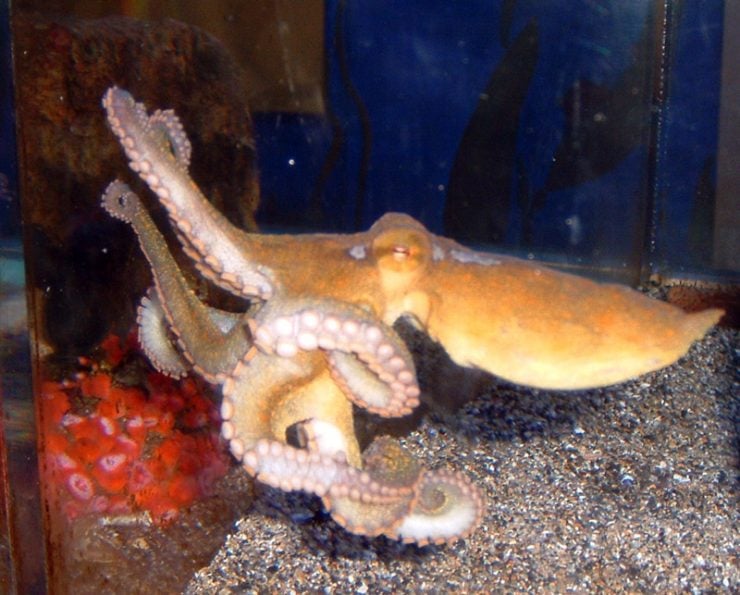 The California Two-Spot Octopus, otherwise known as the Bimac Octopus, is very distinctive in appearance when compared to the many other species of octopuses that inhabit the ocean. These friendly yet timid animals pose no threat to humans.

Overall, the Two-Spot Octopus appears generally similar to the average octopus species, sporting eight tentacles attached to a soft body. It is smaller than most species, and it boasts distinctive markings that separate it from others in the family.

The California Two-Spot Octopus has an average mantle size of about seven inches. Each of its arms can grow up to 23 inches long, giving it a decent reach beyond its own body. The maximum weight documented for this species is 1.5 kg.

This octopus’s most distinctive physical characteristic is its blue spots around its eyes. These two spots reside on either side of the body and resemble the appearance of their eyes, which is thought to be a defense mechanism against predators.

Depending on the specific animal’s habitat, its overall coloring can vary greatly. Many two-spot octopuses have a mottled brown color or a grayish color with yellow spots. By controlling their pigments, they can adapt to their surroundings to hunt, hide, and even mate.

This species has a typical lifespan of one to one and a half years in the wild. The longest it has lived in captivity is two years.

Given its short lifespan, the octopus matures quickly. Upon hatching from their egg, these young animals are immediately independent and can hunt and feed themselves in their first moments of life.

Once it reaches between the ages of one and two years, it becomes ready to mate and reproduce. This species is semelparous, which means it will only mate once its lifetime. When a female is fertilized by a male, she can lay as many as 70,000 eggs. She will then bring cool water over her nest.

After anywhere from 150 to 210 days, the eggs will hatch, and the newborns will immediately begin taking care of themselves.

The Two-Spot Octopus enjoys warmer waters, thriving in oceans with temperatures ranging from 65 to 72 degrees Fahrenheit. They most often live and operate about 65 feet below the surface, making them one of the species more frequently seen by humans.

They prefer to live near the sandy bottoms of the water, leaving them in more shallow areas of the ocean compared to other species. They also like areas with plenty of rocks and crevices in which they can hide.

Where Do California Two-Spot Octopuses Live?

This octopus is native to the coastal areas of California. California’s warm waters are preferable for the species, which like to stay in the warmer areas that the Pacific Ocean provides.

While California is known as its native location, the Two-Spot Octopus can also be found along the western coast of the Baja California Peninsula in Mexico. They also tend to inhabit the warm waters of both Africa and Japan.

As common among sea creatures, especially octopuses, the Two-Spot Octopus enjoys a healthy diet of other sea creatures. They are tactful hunters who operate mainly at night due to their excellent eyesight.

The Two-Spot Octopus usually hunts twice per day, using both active and passive hunting styles. When they are hungry enough, they will set out to hunt their prey and pounce on it to capture and eat it.

Other times, they will use camouflage or simply hide as they wait for their prey to come to them. When prey passes by their hiding spot, they can leap onto them and feed.

If its prey is particularly abundant one day, the octopus may eat twice as often as usual. In these same cases, they will often choose prey that is higher in fat than another nearby animal.

What Do California Two-Spot Octopuses Eat?

The California Two-Spot Octopus is not a picky creature. It will feed on a wide range of sea creatures, from fish to shellfish.

Adults will primarily eat small crabs, snails, clams, and muscles. As hatchlings, the species will hunt amphipods or mysid shrimp.

Life on the California/Mexico coast provides a steady income of mollusks and crustaceans that the octopus can enjoy. They are highly skilled in removing their preys’ shells. When they can’t pry the shell off, they can use toxins from their saliva to remove the body.

Many octopus species tend to share similar threats and predators, as they have much in common. Common threats can involve human interaction, climate change, and natural enemies in the sea.

While the Two-Spot Octopus is not actively hunted by humans, it does tend to get caught in traps and nets. Many fishermen who come across this species in their nets will keep and sell it, though there is a bag limit of 35 specimens. The most common uses for these animals are for food and as pets.

There are conflicting opinions on whether or not climate change and global warming will have a significant impact on the Two-Spot Octopus, along with all other species of octopuses.

In some instances, scientists believe that climate change will lower the amount of oxygen in the ocean waters. Should this happen, some species of octopuses may experience impaired vision as they rely on oxygen to turn light particles into visual information.

On the other hand, studies also show that various species of octopuses are highly adaptable to changing temperatures and acidity levels and that they will prove to be resilient to any kind of climate change.

About two-thirds of the Two-Spot hatchlings will be consumed by predators within the first couple of weeks of their lifetime. Due to the fact that their residence is towards the surface and their small size, they are easy targets.

The California Two-Spot Octopus has specific predators, including moray eels, scorpionfish, and even humans. The adults can often fight off smaller predators. They may lose an arm in the process, but they can regenerate and grow one back in its place.

Other common predators of octopuses include large fish and sharks, dolphins, and birds.

Octopuses of all species face the ever-growing threat of pollution and plastics in the oceans of the world. From being immersed in toxic waters to getting trapped on large pieces of debris, the Two-Spot Octopus faces dangerous obstructions to their natural environment due to pollution.

The California Two-Spot Octopus, listed as Octopus Bimaculatus, currently has no special conservation status. It has not been evaluated by the IUCN Red List and has no special status under the US Federal List.