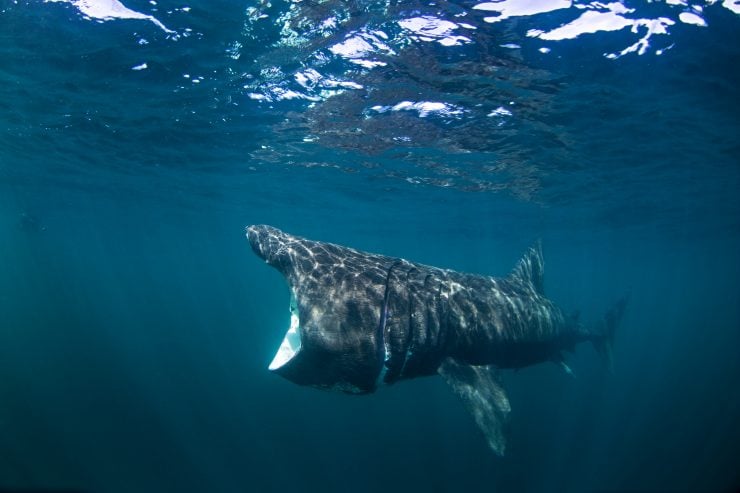 Basking sharks used to travel the world’s oceans in great numbers, but those numbers have been declining steadily for decades and continue to drop.  Despite their historical prevalence in the world’s oceans, modern scientists know very little about this gentle giant of the sea. 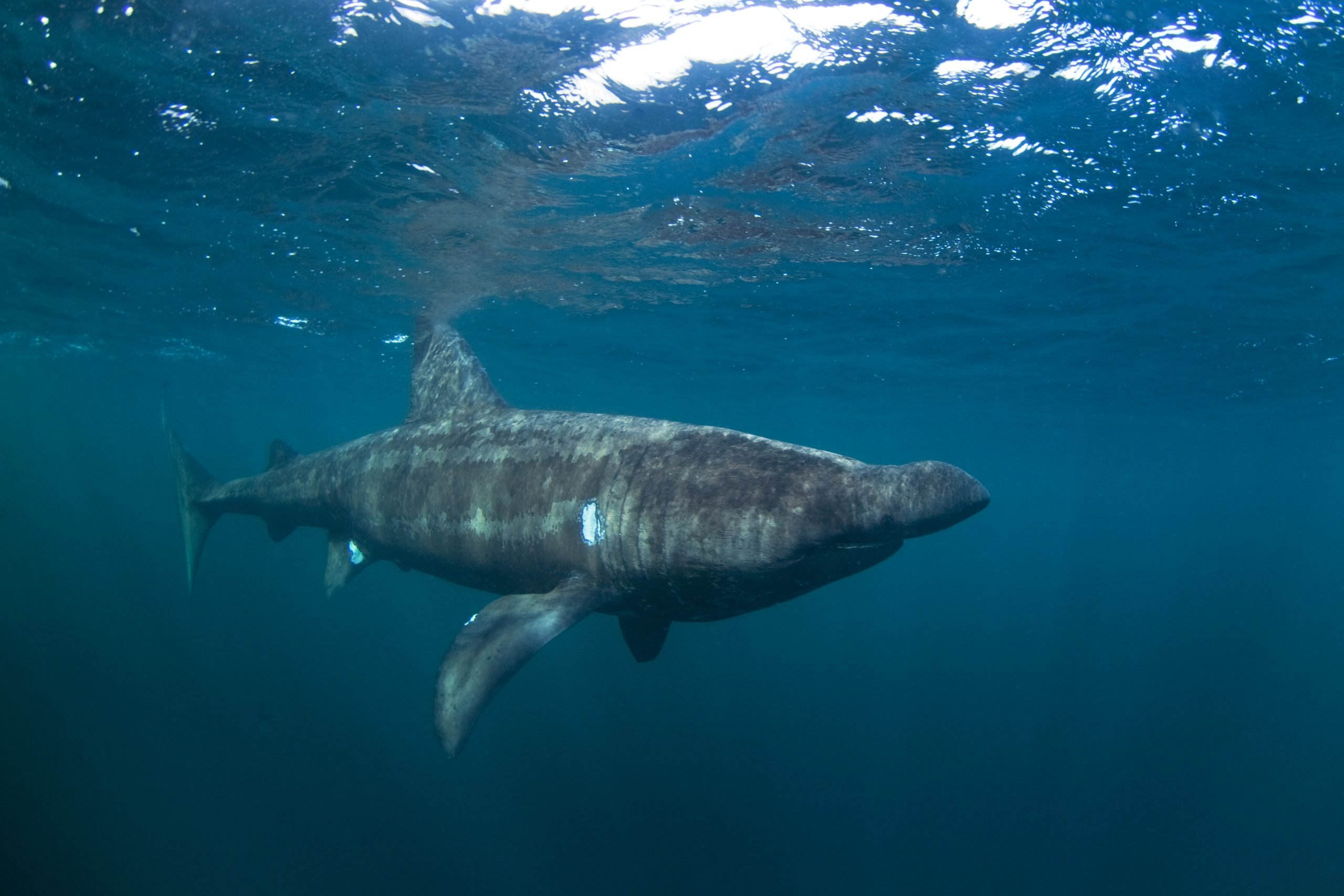 An average adult basking shark weighs a whopping 10,200 pounds and grows to an average length of 26 feet. The largest ever recorded basking shark was caught in a fisherman’s net in the Bay of Fundy in Canada in 1851. It measured 40.3 feet. No one could weigh it at that time, but it’s guessed the basking shark weighed 45,800 pounds.

Basking sharks are often mistaken for great white sharks. The most significant difference is the basking shark’s massive jaw, measuring more than 3 feet. They also have long gill slits that encircle their entire heads, which they use to feed with the help of hundreds of gill rakers. Typically the basking shark is much longer and thinner than great whites and have smaller eyes.

Basking shark tails have a distinctive crescent shape, and their skin is scaly with a layer of mucus over it. They are black, brown, or blue on top, and their color fades to white on their bellies. They have a menacing appearance, which frightened many people throughout history. However, basking sharks are among the most docile, passive, and harmless of the shark family.

Scientists know little about the basking shark. No one is sure how long they live, but experts say it’s probably about 50 years. Basking sharks reach maturity when they are 6 to 13 years old and breed every two to four years, usually in summer.

When a female basking shark becomes pregnant, the shark pups inside her feed on other unfertilized eggs inside her womb, which is called oophagy. Oddly, the female’s right ovary is the only reproductive organ to function. No one knows precisely why.

Females carry their pups from one to three years (the longest gestation period of any animal) and will give birth to several young. The pups are fully developed sharks when they are born and can reach lengths of up to five feet. However, scientists don’t have a firm number on the average litter size, although their best guess is around six.

Where does the basking shark live?

Basking sharks follow concentrations of plankton. That means they live in most of the world’s oceans, including the Mediterranean Sea. Basking sharks like water between 46°F and 58°F, however people have seen them in warmer water. It’s thought basking sharks may migrate to and from temperate latitudes on both sides of the equator.

Basking sharks are found close to shore and spend a lot of time on the continental shelf. They are often spotted on the surface feeding, although they can dive to around 3,000 feet. Basking sharks migrate with the seasons, following their food source.

What does the basking shark eat?

Basking sharks love zooplankton. As a filter feeder, the species follows the dense populations of plankton near the surface. When they feed, they open their massive mouths and slowly glide through the clouds of plankton as the gill rakers remove the tiny plankton from the water. A basking shark can filter millions of pounds of water per hour.

Unlike whale sharks and megamouth sharks, basking sharks cannot suck water through their gills to feed. They can only force plankton-rich water into their mouths by swimming.

For decades, Canada’s government tried to kill as many basking sharks as possible because they frustrated salmon fishing crews. Populations dropped by an estimated 90% on the Canadian Pacific coast. Fishing is still the most common threat, as people in countries such as China and Japan use its cartilage for medicine and use the fins for shark fin soup.

They are often accidentally caught in fishing nets because they are so big and swim so close to the surface. It is illegal in some countries to keep living basking sharks caught in nets, and fishing crews must release them back into the ocean.

Climate change and global warming will affect the basking shark in two ways. First, water temperature and salinity changes due to melting polar ice caps could be detrimental to the basking shark’s survival. The shark enjoys temperate water conditions, and warming sea temperatures will decrease the shark’s natural habitat.

Second, because the sea absorbs much of the extra carbon dioxide in the air, the waters are getting more acidic, which isn’t suitable for many sea creatures such as coral or plankton. Changes in sea acidity could adversely affect zooplankton populations, which would lead to food shortages for these behemoth sea creatures. 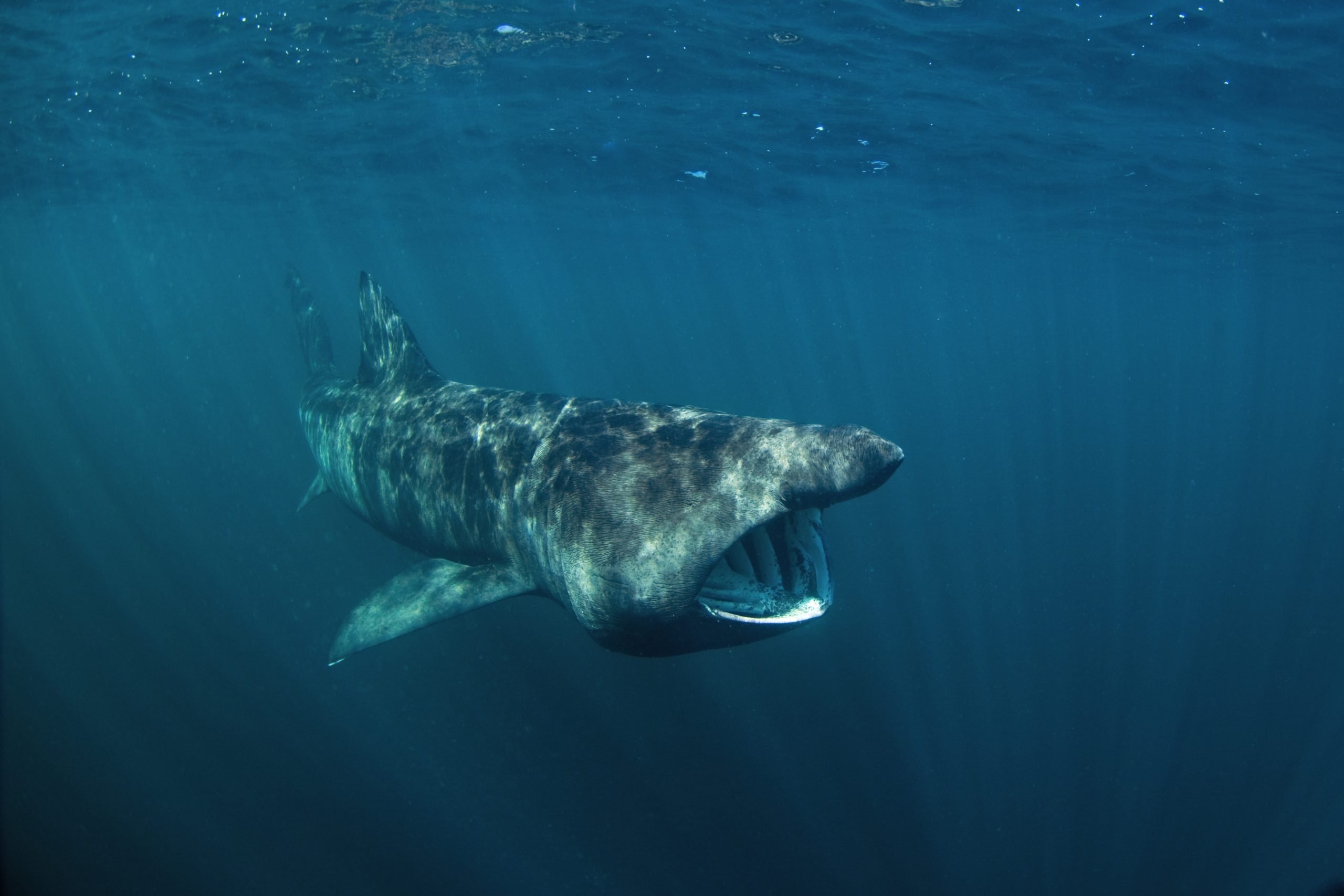 Their enormous size means that besides humans, basking sharks have few predators. There have been instances where people have seen killer whales feeding on a basking shark’s carcass, and great white sharks sometimes eat dead basking shark bodies.

Lampreys often attach themselves to basking sharks, but it’s doubtful they do any real harm besides leaving telltale scars on the sharks’ thick skin.

Basking sharks feed on the surface and therefore are prone to get hit by boats. Basking shark pups are also vulnerable as food to other sharks. 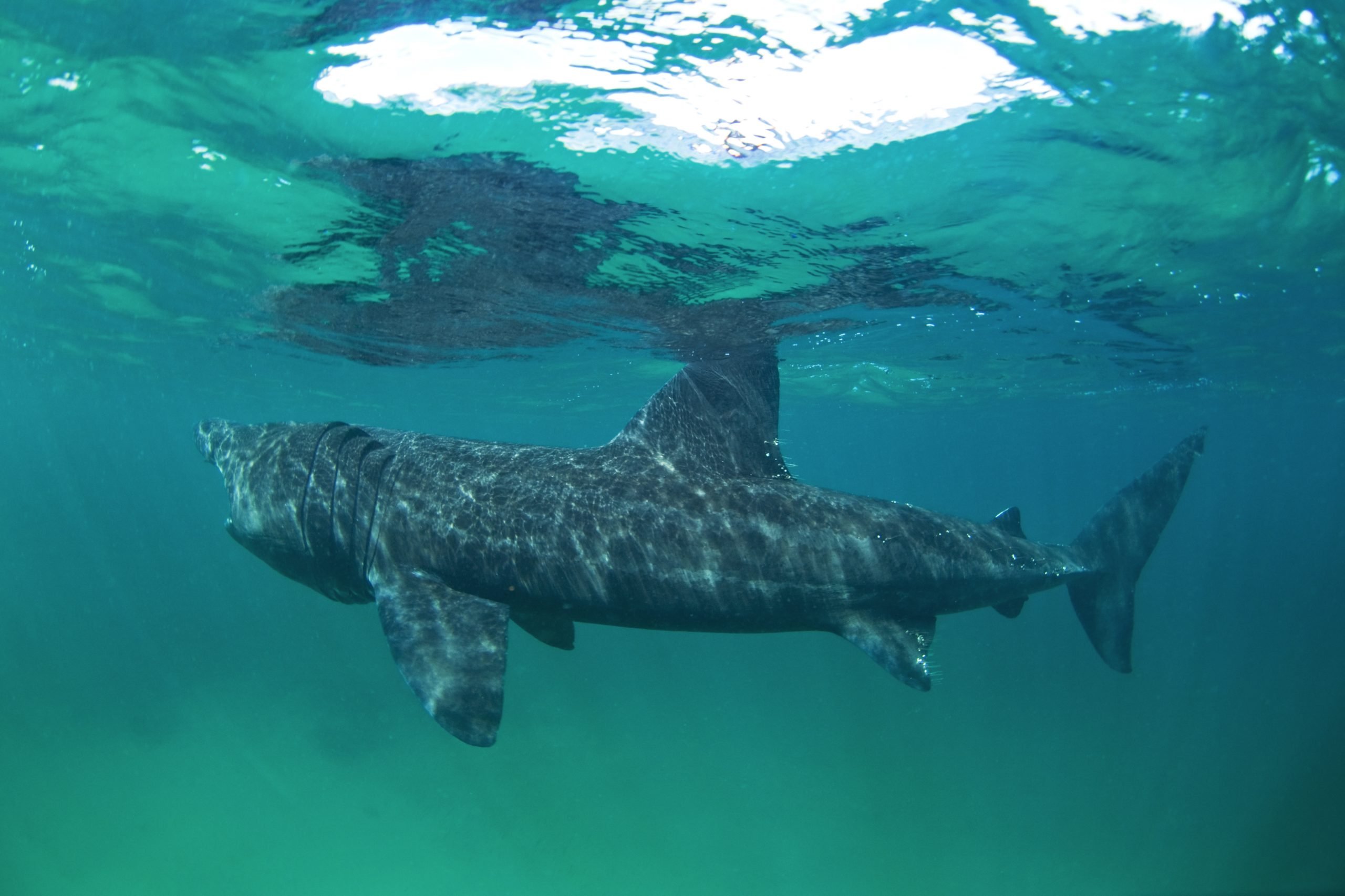 Basking sharks were a common species about 100 years ago. They are passive and not afraid of boats or people, so they were easy targets for fishing vessels. People used the livers of basking sharks for oil, their skin for leather, and their flesh for food. Their passive nature was their undoing, as their numbers have been declining at an alarming rate.

The International Union for the Conservation of Nature (IUCN) has listed the basking shark as a Vulnerable Species. In localized areas such as the northeast Atlantic and North Pacific, the species is considered Endangered and Critically Endangered off Canada’s coast. The species’ numbers continue to decrease, and if global organizations don’t work harder to prevent overfishing the basking shark may become extinct.

Basking sharks are a protected species in many countries. Thanks to international agreements such as the Convention on International Trade in Endangered Species of Wild Fauna and Flora (CITES), it’s also illegal to buy or sell basking shark body parts like fins and cartilage.  However, there is still a black market for sharks in many places globally.