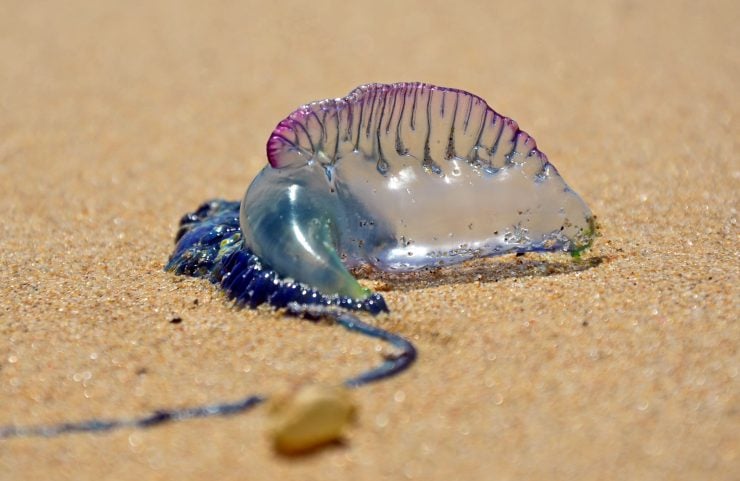 The Portuguese Man-o-War, scientifically known as Physalia physalis, is a fascinating marine invertebrate that’s both attractive and poisonous. Often mistaken for a jellyfish because of its similar appearance, the Man-o-War is actually a siphonophore. This means it’s made up of a colony of individual organisms that work together to help it hunt, feed, and procreate.

Man-of-War colonies travel the warm currents of most of the world’s oceans in groups of up to 1000. With their sail-shaped floats, colonies are also propelled by the wind. Many end up washed ashore coastline beaches, where the Portuguese Man-o-War packs a powerful sting, even on land. 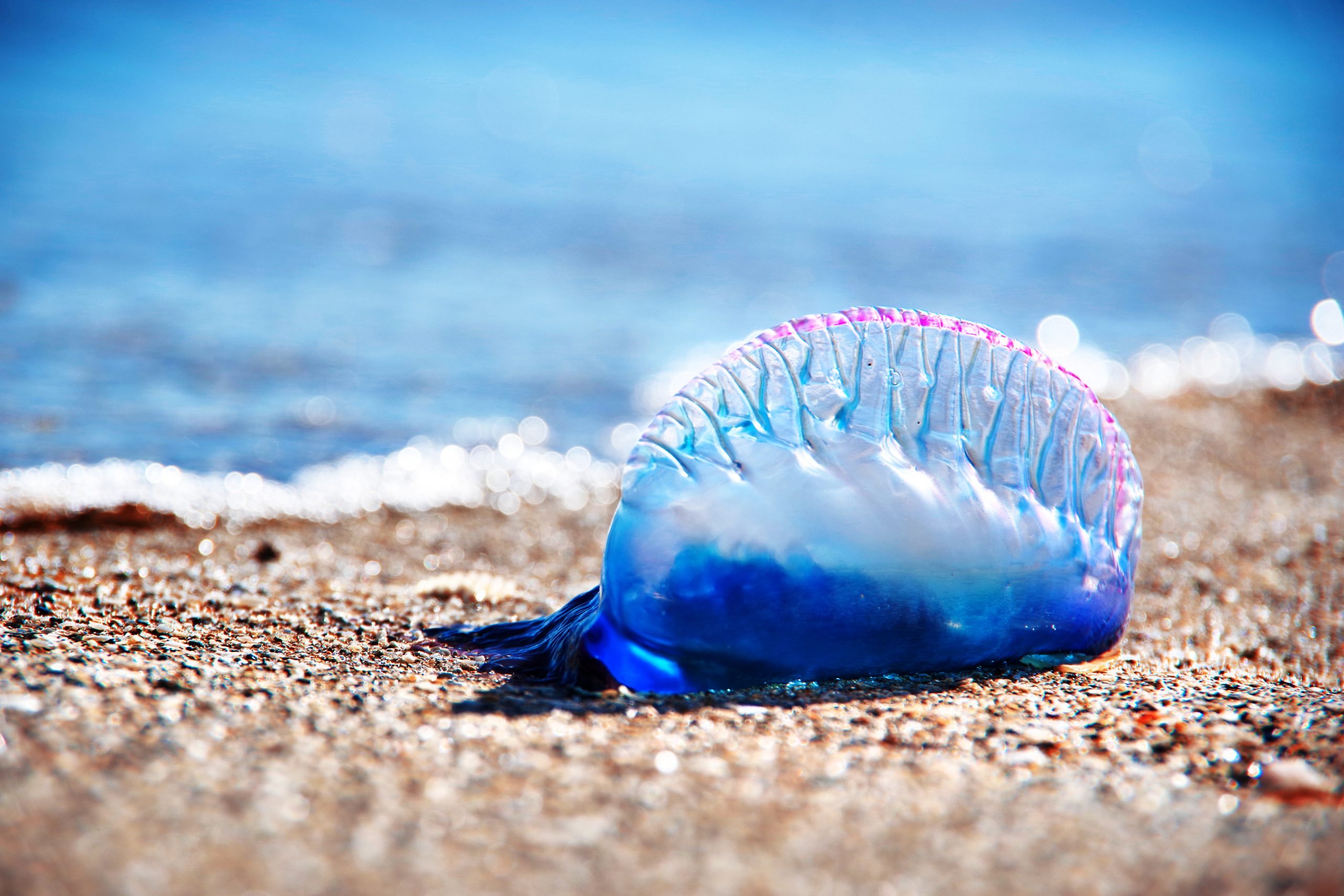 Having colonies so close to humans is a particular problem in Florida and along the US eastern coastline. Some beaches are forced to close when there is an influx of Man-o-Wars in the area.

Although painful, the Man-o-War’s sting generally subsides after 30 minutes, leaving raised red patches on the skin. Some may experience fever and muscle pain. Nausea and vomiting might also occur. There have been only a couple of instances when a sting resulted in death.

There is still a lot to be learned about the Portuguese Man-o-War, and scientists are particularly interested in the way they absorb the sun’s UV rays, as well as their genetic diversity and their role in the ocean’s food web.

Like the jellyfish, the Portuguese Man-o-War consists of a large gelatinous float with trailing tentacles; however, the bladder (float) of the Man-o-War is actually filled with gasses such as carbon monoxide.

This bladder can be up to 12 inches long and five inches wide and sits approximately six inches above the water’s surface (like a sail). Long, venomous tentacles extend below the water’s surface, averaging 30 feet in length or sometimes much longer.

While large and impressive in the ocean, the Man-o-War’s jelly-like consistency makes it relatively lightweight and compact out of the water.

Despite being dangerous if touched, the colorful Portuguese Man-o-War colony is a sight to behold on its own, and as it travels together with hundreds of other colonies.

As a siphonophore, each Man-o-War colony is uniquely made up of four types of polyps that cannot survive without the other’s contribution. These four co-dependent polyps include:

The Portuguese Man-o-War has a signature translucent blue and purple coloring, which helps provide camouflage in the blue ocean waves. 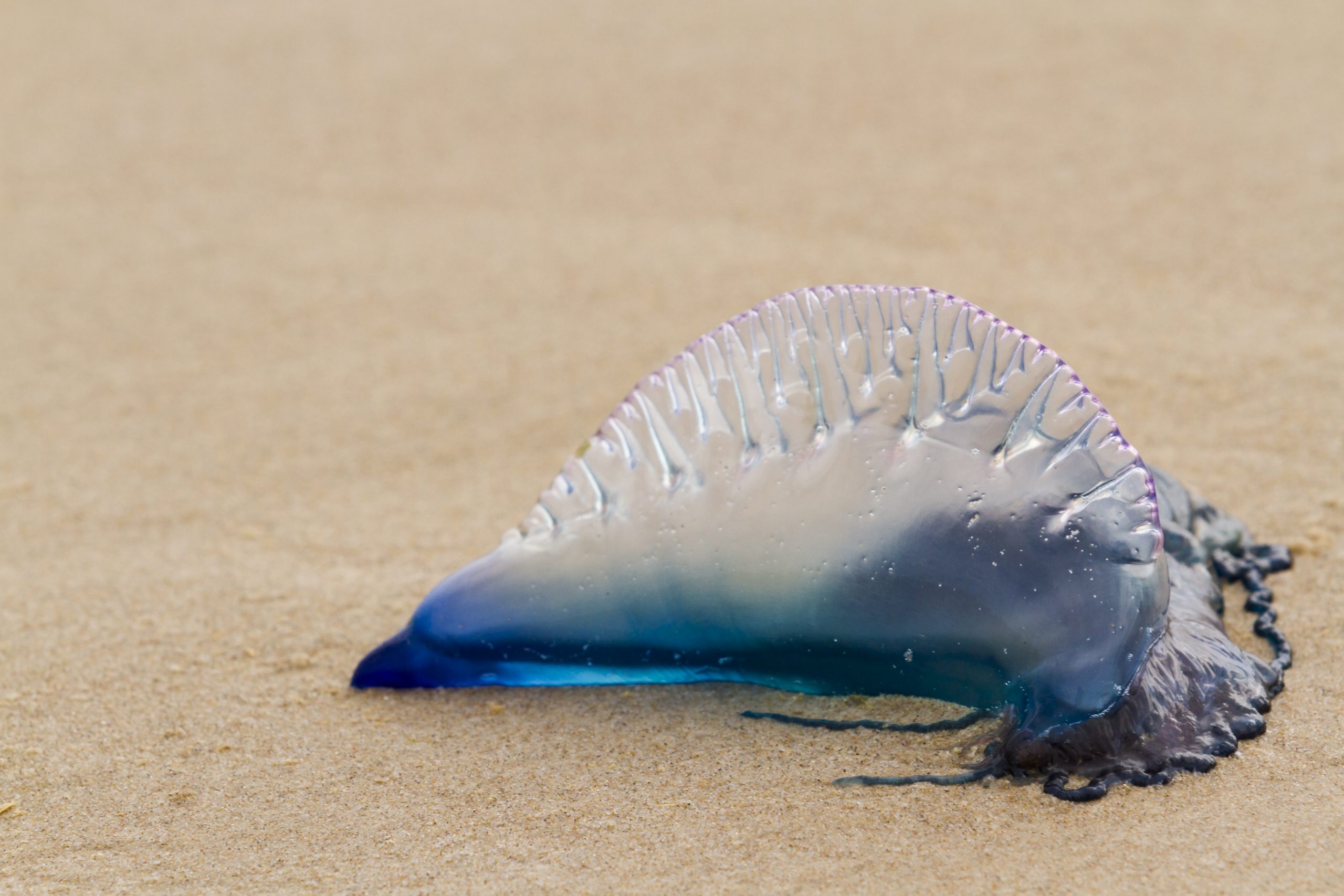 Depending on water temperature and conditions, it’s estimated that the average Portuguese Man-o-War lives for at least one year.

Individual Man-of-War colonies consist of either all-female polyps or all-male polyps. Each fall, spawning occurs in large numbers when it’s believed that colonies release gametes (reproductive cells) in the water for fertilization.

New colonies are then produced through mitotic fission or budding.

Where does the Portuguese Man-o-War live?

The Portuguese Man-o-War prefers warmer tropical and subtropical waters but can be found in the Indian Ocean, Pacific Ocean, Atlantic Ocean, and the Caribbean. The Sargasso Sea is one of their ideal habitats. Man-o-Wars don’t live in the Arctic Ocean.

In the United States, there is a significant presence of Portuguese Man-o-Wars in the waters that span from the Gulf of Mexico to Florida and up the Atlantic coastline.

Occasionally some colonies even drift on the currents or in the wind as far north as the Bay of Fundy in Canada and have been seen in Irish and British coastal waters. As global warming continues, more sightings in northern waters are expected. 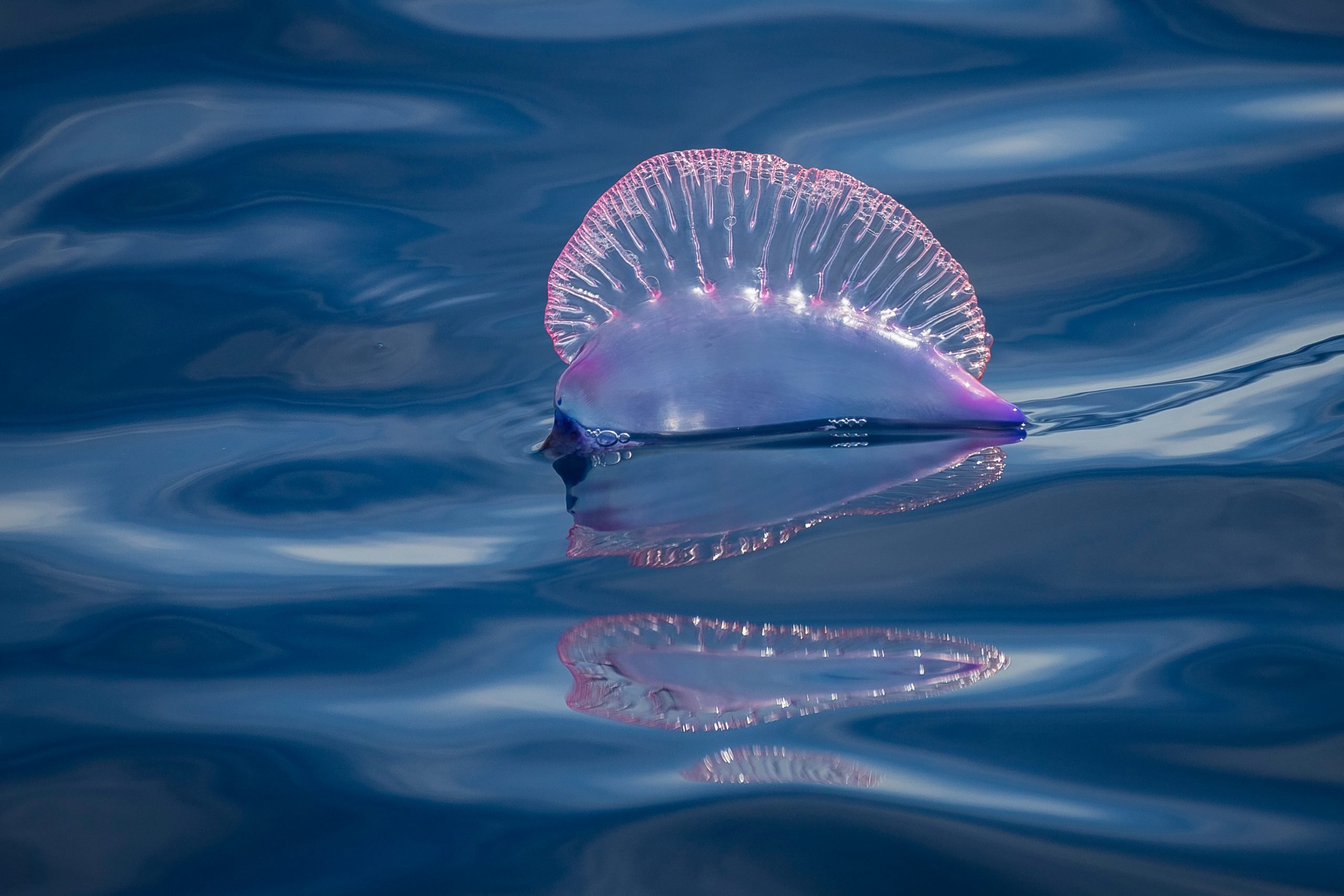 What does the Portuguese Man-o-War eat?

The Portuguese Man-o-War is a carnivorous creature that feasts on a diet of small fish, plankton, worms, and crustaceans. The colony doesn’t actively seek out food but catches prey along its path from the water’s top. Prey is captured and paralyzed in the poisonous tendrils (dactylozooids) before being consumed by the gastrozooid polyp.

The majority of the Portuguese Man-o-War’s diet consists of larval fish. In fact, a 1989 study that examined its stomach contents revealed that each Man-o-War ate approximately 120 larval fish per day.

The Portuguese Man-o-War holds no value for commercial purposes and is therefore not harvested by humans (although its relative, the jellyfish is starting to become a delicacy for some).

While humans do not pose a threat to the Portuguese Man-o-War, the colonies threaten human environments, as colonies are abundant and negatively affect beachgoers and tourism along the coast.

Global warming is resulting in rising ocean temperatures and reduced oxygen levels in the water. While detrimental to many marine species, this combination has created an environment where both jellyfish and the Portuguese Man-o-War thrive.

As the oceans continue to warm, Man-o-War colonies will grow in population and spread. It’s anticipated that there will be more sightings in Canada and northern waters, previously uninhabited by the Portuguese Man-o-War.

Predators of the Portuguese Man-o-War include sea slugs, sea turtles, crabs, fish, and the violet sea-snail.

The blue dragon (a type of inch-long sea slug) is an interesting predator. When consuming a Portuguese Man-o-War, the blue dragon utilizes the Man-o-War’s stinging cells for its own protection by storing them in pockets on its body.

Sea turtles are another predator of the Man-o-War. In fact, one of the reasons turtles are attracted to plastic bags in the water (which are often deadly when consumed) is because they can resemble a Man-o-War.

The Pacific sand crab (scientifically known as Emerita pacifica) is a predator of the Portuguese Man-o-War that drags it to shore and usually shares the meal with other crabs.

The violet sea snail (scientifically known as Janthina janthina) also feeds on the Portuguese Man-o-War by floating upside down to access the Man-o-War on the surface of the water.

If attacked by a predator from above, the Man-o-War’s bladder can deflate and submerge under the water temporarily (a technique they also use to prevent from drying out).

While climate change and global warming are spurring the spread of the Portuguese Man-o-War, the warmer waters and reduced oxygen levels could threaten its food sources (such as fish). 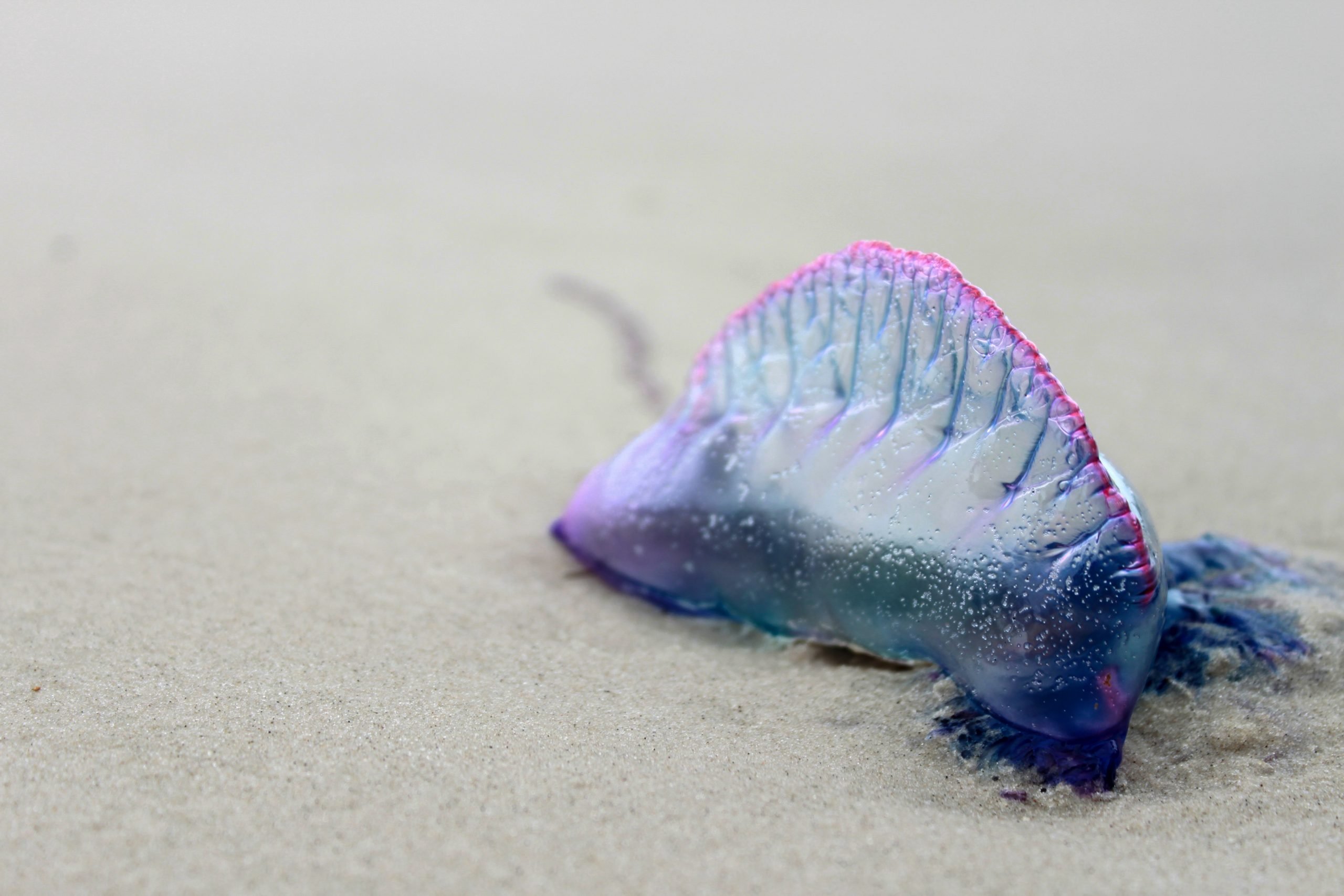 The Portuguese Man-o-War is not considered an endangered species at this time. The species has an abundant spread expected to grow with global warming, although the exact population is unknown.

Fun Facts About the Portuguese Man-o-War

Can a Portuguese Man o’ War Kill You?