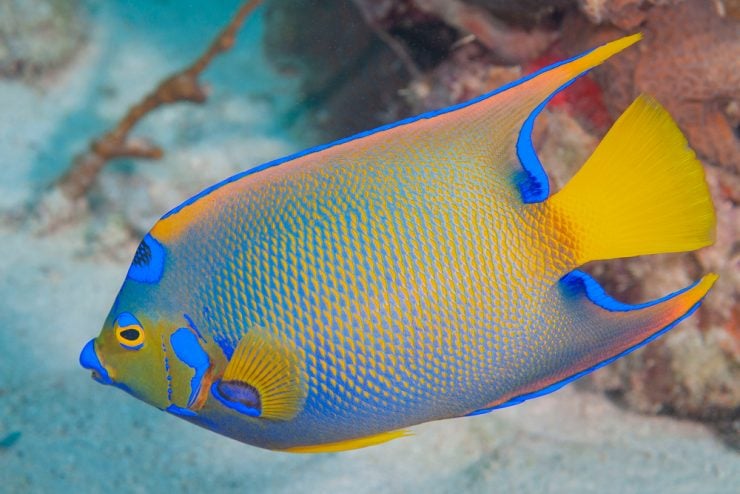 Queen angelfish (Holacanthus ciliaris) are one of the most iconic reef fish. They are one of 86 species of angelfish, a species most closely related to the butterflyfish.

The queen angelfish looks most similar to the blue angelfish (Holacanthus bermudensis). The biggest visual difference is that they are decorated with an electric blue circular “crown” in the middle of their head, which gives them their name.

Queen angelfish are among the most striking reef fish. While their bright coloring would seemingly make them seem conspicuous, they actually blend in well among all the bright colors of reef animals.

The family name for angelfish, Pomacanthidae, comes from the Greek words for thorn (poma) and cover (akantha). The “thorn cover” refers to the preopercle spines which cover their gills and helps them to breathe and feed.

Juvenile angelfish are mainly bright yellow with a dark-brown or black area between the head and tail fin. The brown and black will lighten and finally disappear as it ages, turning to yellow.

Queen angelfish get their name from the round crown-like marking in the middle of their forehead. This “crown” also can look like a large eye, making predators think the fish is bigger than it is.

They have beak-like mouths and small bristle-like teeth. Their mouths are sometimes blue.

Queen angelfish live 15-20 years in the wild or in captivity with proper care.

While their abdomens almost touch during mating, queen angelfish come in contact with each other to mate. Instead, they use broadcast spawning.

During a single spawning season, queen angelfish may release as many as ten million eggs.

Their transparent eggs hatch 15-20 hours after fertilization. It takes only 48 hours for the larval large yolk sac to be absorbed and for the larvae to develop characteristics that allow them to swim. It then takes 3-4 weeks before the juveniles are ready to come down to the reef to live.

Queen angelfish live on warm water coral and rocky reefs in the Caribbean Sea and western part of the Atlantic Ocean.

Where Does the Queen Angelfish Live?

Their range includes coastal areas along eastern Florida, along the coast of the Gulf of Mexico, all the way down the eastern coast of Mexico and Central America. They also thrive along the north and east coasts of South America and around Caribbean countries and islands.

While juvenile queen angels begin life in the water far above the coral reef, adult queen angels are benthic, living at the lowest ocean level.

Adult angelfish restrict themselves to the shallowest parts of a coral reef, so they are most often found in waters anywhere from three to 230 feet (1-70 meters) deep.

Angelfish eat a variety of foods on the coral reef.

What Does the Queen Angelfish Eat?

Before coming down to the reef to live, queen angelfish larvae subsist entirely on plankton.

Adult queen angelfish feed almost on sponges they find around the coral reef. However, they are also foragers that eat a variety of sessile reef plants and invertebrates. Some of their favorite snacks include algae, hydroids, bryozoans, soft corals, sea fans, tunicates, anemones, jellyfish, and loose organic matter fragments.

The main threats to queen angelfish are humans who harvest them for the aquarium trade and large reef predators.

Queen angelfish are popular in saltwater aquariums, so humans harvest them for the aquarium trade. They’re harvested more in Brazil than in any other place.

There is a harvest management plan in place so that queen angels do not become overharvested. In Brazil, collectors cannot exceed 10,000 specimens. However, this quota is far more than the current collection levels. In five years, collection numbers are around 44,000.

Humans do not often catch queen angelfish for food. Consumption can cause Ciguatera poisoning, resulting in gastrointestinal issues and weak arms and legs. This poisoning is caused by an accumulation of ciguatoxins in the fish’s flesh. Dinoflagellates that attach themselves to marine algae can contain ciguatoxins. When fish eat algae or other fish that eat algae, they can become infected.

Queen angelfish have become increasingly threatened by the destruction of coral reefs. Efforts to restore coral reefs can prevent them from becoming endangered. Luckily, some of the reefs in which they live have become protected areas.

Larger fish are the primary predators of queen angelfish. Their predators include sharks and barracudas.

The queen angelfish population at St. Paul’s Rocks in Brazil is the most susceptible to overcollection for the aquarium trade because they have unique and varied color patterns. However, collecting queen angels from there is an expensive endeavor since the island is 1000 miles from land.

Queen angels can be found in great numbers in their natural habitat. The International Union for Conservation of Nature (IUCN) lists queen angelfish as having a stable population and being of little concern.

How Do Young Queen Angelfish Help Other Fish?