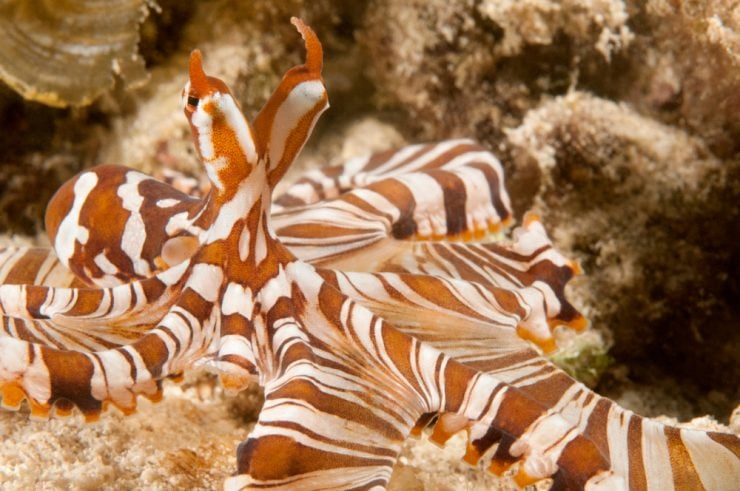 The Larger Pacific Striped Octopus has stood out among sea creatures as one of the ocean’s most unique animals. With a colorful appearance and intriguing behaviors, it eradicates what you thought you knew about underwater interactions.

This octopus needs minimal introduction, so let’s jump in and discover what makes it so fascinating to scientists and everyday folks alike.

The Larger Pacific Striped Octopus is somewhat of an enigma to scientists around the world. There is little official information on the books; the species has yet to claim itself a formal scientific name.

However, we can still discuss this intriguing animal’s characteristics and appearance, as many have studied its life and behaviors.

This octopus is not a particularly large one. The females grow to be less than three inches, while the males stay even smaller at around two inches.

Though its name characterizes this animal by its apparent stripes, this octopus boasts spots as well. The combination of stripes and dots certainly gives it a unique pattern. Most of them have white and brown stripes on their head and mantle with white spots on their arms.

While these patterns are the most common, the species has also been known to be either pale or dark brown.

Perhaps the most head-scratching trait about this striped octopus is its mating behavior. Most species of octopuses mate from a distance, with the male stretching out its reproductive arm to inseminate the female. This is due to the typically aggressive nature of the female.

However, this Larger Pacific has seemed to evolve in its social behavior.

Not only do the male and female join together at the beaks to mate, seemingly kissing, but they also tend to cohabitate. While most females mate with multiple males at once, the Pacific Striped will mate with just one male.

This species’ females can also produce several batches of eggs, making them superior to other species that die after laying their first eggs. In fact, these females will take care of their hatchlings up to eight months after they emerge. The male also stays in the picture, sharing a den, food, and even cleaning chores.

The Larger Pacific Striped Octopus typically lives for a period of two years. It will enter a stage of senescence shortly before it dies, a period that tends to last longer for females than males.

As far as distribution and habitat go, it’s difficult to make assertions on the subject. There is still much to be discovered about this species, as there is a little bit of information available at hand.

Most Larger Pacific Striped Octopus specimens have been found in the bay of Panama, Guatemala, and Nicaragua. The estimated range of this animal’s distribution goes from the Northern coast of Colombia to Baja Sur, Mexico.

The few individual animals that have been encountered were found at a depth of about 40 to 50 meters deep, though one report was all the way down to 300 meters.

As it stands, scientists believe this octopus prefers to live among the muddy and sandy substrates. It also seems to enjoy living in intertidal waters, taking up shelter in dens.

The diet of the Larger Pacific Striped Octopus is believed to be reasonably similar to that of other octopus species, with common prey such as crabs, small fish, clams, snails, and shrimp.

We can expect the diet of the Larger Pacific to mirror that of any other kind of octopus. Its most likely prey for mealtime includes various shellfish, such as shrimp, crabs, and bivalves. Any small shellfish it can get in its grasp will make a nice meal.

Because there is still so little known about the Larger Pacific, it’s challenging to find precise information and answers to all of our questions. We can, however, surmise that many threats and predators of the octopus family likewise impact this specific breed.

Considering that it’s difficult for scientists to even locate this species for continual study, the likelihood of human threat does not seem to be significant. However, actions such as overfishing and pollution can pose threats to all sea creatures, the Larger Pacific Striped Octopus included. Octopuses can also get caught in nets and fishing pots as they try to hunt their prey.

With climate change and global warming concerns on the rise, there is data to suggest that many sea creatures could be in danger. For a long time, views conflicted on whether or not the octopus family would be impacted by climate change.

Recent studies show that on a general level, octopuses are actually extremely adaptable to not only changing temperatures but increased acidity caused by CO2. Overall, this latest study shows that octopuses may be able to withstand changes to the ocean.

Various species of octopuses actually have many threats within the ocean that they must avoid on a regular basis. Animals like sharks, dolphins, seals, sea otters, eels, and even birds have been known to hunt these creatures. Fish and rays can also be harmful to them.

Many octopus species are also known to be predators of their own kind, with cannibalism being a genuine threat. However, limited observation of the Larger Pacific seems to show that this species is a bit more social and may not participate in these instances.

According to the IUCN Red List, the Larger Pacific Striped Octopus is not currently in danger of decreasing population, nor do they presently need any particular kind of conservation. As with all sea creatures, we can each do our part to keep their environment clean and follow all laws and regulations concerning fishing.