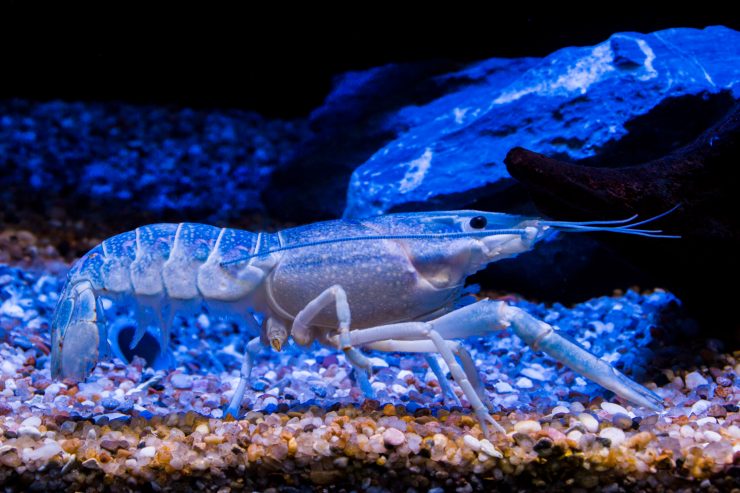 The Atlantic white shrimp (Litopenaeus setiferus) goes by many names: we know them as lake shrimp, common shrimp, Northern white shrimp, Southern shrimp, and more. Their current populations are at acceptable levels, and they’re not at risk of overfishing.

Atlantic white shrimp are essential to the seafood industry, as they account for a large portion of marketable product. Most of the white shrimp consumed by humans are grown in fisheries, not harvested in the wild. Outside of being a popular seafood, these shrimp are incredible creatures with some exciting characteristics.

The Atlantic white shrimp is one of the most common prawn species. They’re known for their long antennae and their ability to walk along the ocean floor, swim, and burrow into the sand. They grow very rapidly after birth.

The Atlantic white shrimp can reach up to seven or eight inches in length as an adult. Their size often depends on the makeup and temperature of the water where it lives. Their antennae can average anywhere from 2.5 to three times their body length, the longest of any shrimp species.

White shrimp aren’t technically sexually dimorphic, but the females do tend to be slightly larger than the males. At adulthood, an Atlantic white shrimp only weighs about one to two ounces.

The Atlantic white shrimp is a crustacean, and its carapace has no grooves. They also have a toothed rostrum, or beak-like protrusion, that sticks out to the edge of the eyes. The shrimp has ten walking legs on its lower body and ten swimming legs on its upper body, giving it a total of 20 legs.

While this shrimp is named the Atlantic white shrimp, it’s actually made up of several colors. Its body is white with a light blue tinge. The shrimp’s sides are a pale pink color, and the legs are black with yellow and green on the edges. They also have some green on their tails and a yellow band along the abdomen.

The Atlantic white shrimp has a relatively short lifespan. It can live up to two years but typically live less. It’s called an annual crop in agricultural terms, meaning most shrimp live only a year or less.

Atlantic white shrimp mature and reach their reproductive age when they’re about 5.5 inches long. Their spawning season depends on when the water near the ocean floor warms in temperature.

Shrimp who live in the Gulf of Mexico usually spawn between March and September. Farther north, such as in the Carolinas, they have a shorter spawning season, from May to September.

The male shrimp mate with the females by attaching their sperm to them. The females then release anywhere from 500,000 to a million eggs. Fertilization occurs during the release. Once the shrimp hatch, they make their way to an estuary for the winter. If they survive the winter, they grow quickly and then go back to the ocean by springtime.

Atlantic white shrimp can withstand temperatures as low as 37 F and water depths of up to 90 feet. However, they prefer to live in warmer, shallow waters. They also tend to thrive in water with lower salinity levels and ocean floors that are made of organism-rich material.

Where Do Atlantic White Shrimp Live?

As the name suggests, Atlantic white shrimp are found in the Atlantic Ocean. They can be found all along the Gulf of Mexico coastlines, from Campeche, Mexico, to the Ochlochonee River in Florida. On the east coast, they live along the coastlines between Fire Island in New York to the St. Lucie inlet in Florida.

Atlantic white shrimp aren’t known for their pickiness when it comes to food choices. They’re omnivorous and will eat just about anything if it’s small enough for them to consume. They also tend to be cannibalistic.

What Do Atlantic White Shrimp Eat?

Atlantic white shrimp feed on pretty much whatever is along the ocean floor. They’ll eat plants, detritus, microorganisms, small fish, and macroinvertebrates. The larvae, however, only eat plankton, which is made up of tiny animals and plants floating along the bottom of the ocean.

While the Atlantic white shrimp isn’t currently in danger of becoming endangered, there are threats and predators, both from other animals and humans.

The Atlantic white shrimp is currently cultivated and harvested by humans. It’s one of the most popular types of seafood, and many people depend on the shrimp to make their living. Despite the frequent fishing, both the Atlantic coastline and the Gulf of Mexico have regulations in place to prevent threats to the population.

Regulations are also in place to prevent bottom trawling equipment from damaging the shrimp’s habitat and to protect the shrimp from bycatch. However, many other animals like sea turtles, rays, and sharks are threatened by this fishing activity.

Like most animals, the Atlantic white shrimp is threatened by climate change and global warming. The shrimp prefer shallow water, especially for spawning, and rising sea levels can threaten their habitats.

The Atlantic white shrimp has many natural predators. Quite a few creatures feed on the shrimp larvae and babies. These animals include insect larvae, sheepshead minnows, and water boatmen. Blue crabs, grass fish, and killifishes will also eat the younger shrimp.

Quite a few animals will also eat the adult Atlantic white shrimp. Many varieties of finfish consume them, along with other types of fish. Even barnacles have been known to eat shrimp.

Atlantic white shrimp undergo a molting process several times throughout their lives. Their exoskeleton is fairly rigid and offers some protection against predators. However, during the molting process, there’s a short period where the old exoskeleton has been shed, and the new one is still hardening. During this time, the shrimp is an easy target for predators as it has little protection.

The Atlantic white shrimp is currently classified as the least concern on the conservation status scale. This classification means that the shrimp is not in danger of being threatened, endangered, or becoming extinct.

While the white shrimp is a popular seafood and an essential product for the fishing industry, great pains are taken to prevent overfishing and threats to their habitat. Both the Atlantic and the Gulf of Mexico have laws in place to protect the shrimp.

A few of the regulations include requiring permits for fishing, restricted months where fishing isn’t allowed and mandated catch levels. To keep their permits, fishers must adhere to all of the stated rules.

The Atlantic white shrimp has the longest antennae out of all shrimp species. The shrimp has a neat trick to escape from predators. They quickly flick their tail, propelling themselves backward and sometimes even jumping out of the water. White shrimp can also swim backward.

One of the reasons white shrimp are so abundant is that a female can lay over 1,000 eggs in one spawning. Before the spawning, she transports the fertilized eggs on her back. The eggs only take a few weeks to hatch, and the larvae grow very quickly into adults. White shrimp are related to several other sea creatures, including crawfish, lobster, krill, and crab.

While many people refer to the black line inside a shrimp as a vein, it’s not actually a vein. It’s the shrimp’s digestive tract. The Atlantic white shrimp was one of the first commercial kinds of seafood and is also one of the world’s most popular seafood types.