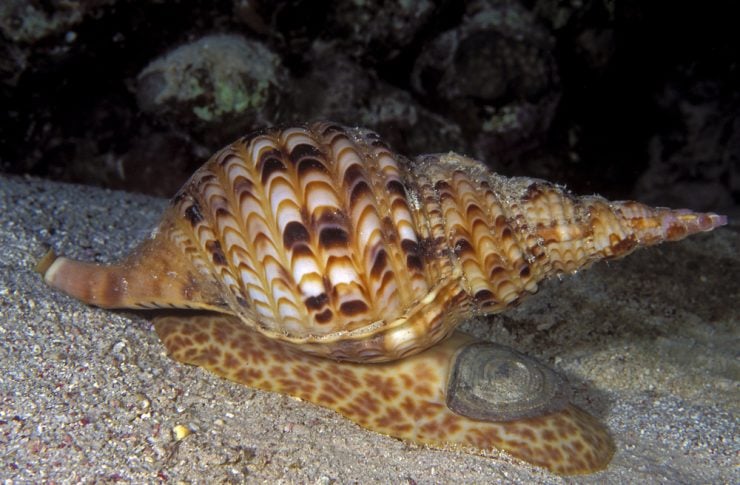 The Charonia Tritonis, also known as the Giant Triton and Triton’s Trumpet, is a large marine snail. They are gastropod mollusks who get their name from the Greek god Triton, son of King Poseidon. Greek mythology often depicts Triton blowing a seashell horn that resembles the Giant Triton.

The Giant Triton has a humongous spindle-shaped shell that’s size makes it one of the gigantic marine creatures in the world. Its calcium carbonate structure protects the snail’s colorful and soft body, providing it with a safe home.

The Giant Triton’s shells can reach two feet in length, or 0.6 meters. Most stay at around 20 inches, or 0.5 meters. It takes approximately ten years for them to achieve these lengths. These snails weigh about five pounds, though the exact weight depends on their size.

This snail species have a well-developed head, tentacles, and eyes. Its mouth is on the protractible proboscis, or a mouth tube, which has toothy radula. The radula is a serrated, scraping tooth-like organ unique to gastropods. Giant Tritons travel with a broad, muscular foot that crawls through the sand.

The gorgeous shells of the Triton’s trumpet have intricate striped patterns, typically in yellow, brown, and white. Some of these snails have shades of red in their shells as well. Their bodies have similar sunset coloring to their carapaces.

Researchers estimate that Giant Tritons live for around 20 years in the wild; however, there is no official metric on this topic.

Most species of gastropod snails evolve as hermaphrodites, but Giant Tritons did not. They reproduce sexually via internal fertilization.

The female Triton will lay her sticky eggs on the sand, where sediments cover and protect the eggs from predators. The Giant Triton lays her eggs in clusters. They resemble club-shaped capsules with white coloring.

Newborn larvae are somewhat planktonic, floating through the ocean currents for around three months before landing on the seafloor.

The Charonia genus lives in tropical and temperate waters around the world. They spend their days in rocks and holes, waiting for night to come. Then, this night predator will feed on the nearby prey. The Giant Triton inhabits coral reefs, keeping them healthy by controlling crown-of-thorns starfish populations.

Where does the Giant Triton live?

The Giant Triton lives in the Indo-Pacific Oceans, like the Red Sea. It also inhabits the Mediterranean. They reside in moderate depths of 15 to 75 feet in the Pacific Ocean, but they dwell deeper in habitats filled with coral.

Corals thrive when accompanied by Giant Tritons, so you will often find them existing symbiotically.

The Giant Triton is most notorious for feeding on crown-of-thorns starfish. When the snails smell prey, they will immediately chase them. Starfish can detect the snail approaching them so that they will attempt flight. However, these speedy night predators are faster and follow their meal until they catch onto a limb. Sometimes the starfish will shed the captured limb, but they typically become victims before they can escape.

The marine snail grabs its food using its foot and saws through the starfish’s skin with its radula. Upon penetrating the skin, the Giant Triton will paralyze the prey with its saliva and feed at its leisure. These snails usually eat the soft parts first, like the guts and gonads.

The Triton does not paralyze smaller animals; instead, it eats them whole. They spit out poisonous or unwanted shells, spines, and parts later, but they will attempt to eat most edible animals in their path.

What does the Giant Triton eat?

The Giant Triton prefers to eat crown-of-thorns starfish. These starfish destroy coral reefs, which is why the Triton lives in them. Both the reef and the snail protect and keep each other alive.

It also eats cushion stars, echinoderms, sea cucumbers, sea urchins, starfish, and other mollusks. This snail can spit out toxic substances later, so it will eat most animals that it comes across. Giant Tritons are carnivorous bottom feeders.

The biggest threats to Giant Tritons are humans. These predatory marine snails face few obstructions in their natural environments. Not only are they prized for their beauty, but anthropogenic leftovers can kill them.

For centuries, humans have hunted Giant Tritons for their beautiful shells. By blowing into their carapaces, you can produce a distinct, trumpet-like sound. The body requires an extra hole, either natural or human-made.

Hawaiians often use their shells as a ceremonial trumpet by removing the spire’s tip or by making a hole in its side. Other ancient traditions throughout the Indian and Pacific Ocean islands and Indonesia use the Giant Triton as a trumpet.

Modern collectors desire this shell for its beauty. People will hunt and kill the snail to keep its body as a decoration. You can find them sold in stores and markets in island countries where citizens can kill and trade them legally. Populations have declined as a result of this hunting, which has led to an increase in crown-of-thorns starfish.

Also, concerned divers have found the Giant Triton in large underwater tires, shipwrecks, and other discarded human goods. These obstacles trap them, preventing them from eating and reproducing.

These human threats not only harm Giant Triton populations but coral reefs as well. The Great Barrier Reef has had a decline in coral cover, reaching 50%, partially because of the crown-of-thorns starfish. Reducing these populations could increase the average coral cover, but that cannot happen without the help of the Giant Triton.

While these snails prefer warmer waters, drastic increases in ocean temperatures from climate change could interfere with their reproductive cycles and survival. Marine snails are resilient to temperature changes, but extreme swings could kill some of their food sources and coral habitats, reducing their populations.

The ocean’s acidification from global warming has also harmed marine life, leading to a decrease in the Giant Triton’s food supply. They could fall victim to careless boaters, divers, and swimmers as well if they lack the coral to camouflage them during the day.

The Giant Triton is a predator itself, and it does not have any natural predators of its own. The biggest qualm for its survival is humanity.

The rising tourism industry to the native countries of these Giant Tritons can affect their populations. More visitors increases the chance of them being spotted and taken for their shell. Also, travel negatively impacts the environment, and people may clutter the snails’ ocean homes.

The International Union for Conservation of Nature’s Red List of Threatened Species has classified the Giant Triton as “Vulnerable.” Its population trend is somewhat unknown. A few countries protect this species, including Australia, Seychelles, and Fiji. However, most other countries do not regulate their hunting and trade.

The Australian Institute of Marine Science noted the importance of the Giant Triton. An Australian government-led program has begun breeding this species to control crown-of-thorns starfish populations.

Fun Facts About the Giant Triton