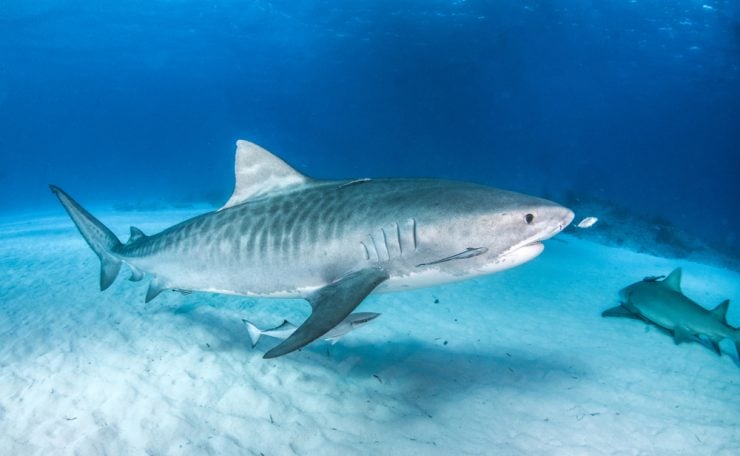 The tiger shark, or Galeocerdo cuvier, is the last remaining member of the Galeocerdo genus. This apex predator is a requiem shark, and it is near threatened because of fishing and finning.

Tiger sharks can achieve weights of 850-1,400 pounds and lengths of 10-14 feet. The females are larger than the whales, with the largest recorded female tiger shark weighing 3,360 pounds at 18 feet. The most massive unconfirmed tiger shark was over 24 feet, but that value exceeds any other specimen and requires verification to accept as fact.

Poorly studied species like Pacific sleeper, megamouth, bluntnose sixgill, and Greenland sharks overlap in length, but scientists have not confirmed their average mature sizes. Great hammerhead sharks have similar body lengths, but they fall short of the tiger sharks’ status because of their smaller average weight.

Tiger sharks are named for their resemblance to land tigers. Their skin has dark stripes that fade as the shark ages. The upper skin has a dark gray or bluish-green color, while the ventral area is white or yellowish.

The skin of tiger sharks lets them camouflage in the water. It employs countershading as it camouflages with both the light and dark sides.

Tiger sharks have wedge-shaped heads that allow them to turn on one side. Their snouts have small pits with ampullae of Lorenzini that let them detect electric fields for hunting. Tiger sharks have sensory organs down their sides to help them track prey via small vibrations in the water.

The tiger shark’s teeth have a sideways tip and sharp serrations, lending to their recognizable appearance. Their relatively short yet broad teeth can slice through bone, flesh, and even turtle shells. The shark restores them throughout its life.

Tiger sharks have long fins that reduce drag as the shark glides through the water. Their long upper tails let it accelerate easily. Despite their long bodies, tiger sharks swim with small motions. Their dorsal fins and high backs let them pivot swiftly on their axes. The dorsal fins lie close to their tails.

While it does not have a moveable external eyelid, the tiger shark has clear nictitating membranes that cover its eye. The tapetum lucidum behind the retina lets a tiger shark see in low-light because the light sensors get a second opportunity to capture photons.

Tiger sharks have an average lifespan of 27 years in the wild. Their assumed life lasts between 20-50 years. Males reach sexual maturity first at seven years old, while females achieve it at eight.

Females mate every three years with multiple partners throughout their lives. In the northern hemisphere, fertilization happens between November and January. On the other hand, it occurs from March to May in the southern hemisphere.

Tiger sharks breed with internal fertilization. The male places a clapper, which guides the sperm, inside the female’s cloaca. His teeth hold her still as it occurs, which leads to discomfort on the female.

The embryos gestate for 14-16 months, feeding on the female’s yolk sac and uterine secretions. Tiger sharks are the only ovoviviparous Carcharhinidae as the babies come out hatched. Litters can have between 10-80 pups about 20-30 inches long.

Where does the tiger shark live?

You can find a tiger shark in all tropical and subtropical oceans, but they primarily lie between 45 degrees north and 32 degrees south. Tiger sharks live between North America and Brazil and in the Gulf of Mexico and the Caribbean Sea; you can also find them in Arica, China, India, Indonesia, Japan, New Zealand, and the Pacific Islands.

Their size means they should normally stay around 1,100 feet based on their size, but you can commonly find tiger sharks in much shallower waters. These saltwater species can approach the coast in shallow waters 10-40 feet deep.

Tiger sharks have nomadic behavior, but they swim with warm currents and tend to stay near the equator in the winter months.

What does the tiger shark eat?

Their camouflage helps them trap prey in any environment, but they do not engage in high-speed chases, so their prey can escape. Their broad jaws and serrated teeth let tiger sharks capture large animals, and their sense of smell and eyesight let them find food rapidly.

These carnivores will eat almost anything they see whole, which means they have a reputation for eating bags of trash. Furthermore, these apex predators can live for weeks at a time without food.

Overall, humans are not the biggest threat to tiger sharks. Tiger sharks are not commercially fished, but they are caught for their flesh, fins, and liver for vitamin A oils. However, they have been finned and fished excessively over the years. Some people will hunt the tiger shark for their unique skin. Also, some cultures sell tiger sharks as food.

Tiger sharks are considered one of the most dangerous shark species because they are responsible for approximately 34 human deaths and 95 nonfatal, unprovoked deaths since records have been kept. Great whites often release human prey when they find them inedible, but tiger sharks will not swim away.

Since tiger sharks do not discern what they should eat, they often attack humans out of curiosity. They also lie in harbors, estuaries, and close to shore, where they contact many people.

In Hawaii, 4,668 tiger sharks were removed from the environment to rebrand the state as safe from shark attacks. While the population decreased, humans and tiger sharks interacted just as frequently.

Maintaining tiger shark populations is necessary to avoid the overpopulation of marine herbivores who would overgraze seagrass and reduce biodiversity. The ecosystem would not recover from this damage, and it could lead to the extinction of many species.

Since tiger sharks are apex predators, they do not have many natural predators themselves. The only known predator of the tiger shark is the orca. Killer whales will sometimes force them to the surface and flip their body to drown the shark. They then rip off its fins and disembowel it for eating.

Since tiger sharks are susceptible to environmental changes, they can get skin disease if they stay in freshwater too long.

The International Union for Conservation of Nature Red List has noted that tiger shark populations have declined. Due to overfishing and finning, these sharks have earned the status “Near Threatened.”

Greenpeace has listed sharks on their Seafood Red List to discourage the sale of them for food.

Charities like Shark Trust work to mitigate the effects of climate change on oceans, but no charity specifically works to conserve tiger sharks.