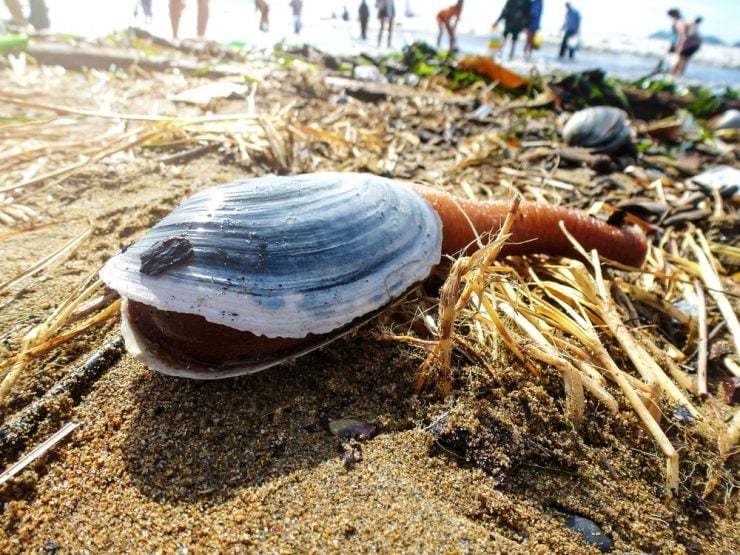 Strangely enough, geoduck is pronounced like “Gooey duck.” Despite its name, Geoduck is not a bird species but a type of clam. These things may be strange-looking, but they are truly magnificent creatures that have a few surprising facts about them.

Geoduck isn’t your standard-looking clam. While they do have a shell-like most other clams, their body is extremely large. It is one of the biggest clams that falls into the burrowing category.

To give you an idea of what it looks like, let’s talk a little bit about where the word “geoduck” comes from. Part of the name originates from a word meaning “genitals.” Its name is probably due to the clam’s genitalia-like appearance.

The geoduck’s shell is relatively small. The longest part of their body is the siphon. This is what grows to reach multiple feet in length. They also have a neck that splits open into two different parts. Each part has a different function. One is for taking in necessary life sources, like water, for example. The other disposes of the unnecessary water it has taken in.

Geoducks are extremely large. While the average size is just under two pounds, they can become as large as seven pounds. They can also grow as long as six feet.

It takes geoducks around fifteen years to grow as large as seven pounds. A geoduck’s shell is between six to eight inches long, while the rest of its incredible length comes from its siphon and neck.

Geoducks do eventually stop growing when they reach around fifteen years of age, and the majority of their growth takes place in the initial years they are alive.

Geoducks can range in color. They can be more light-colored, almost a creamy white, and dark-colored to a very deep dark brown color.

Their most notable feature is their long siphon which includes the two separate openings at the end (the neck). Geoducks take water in and squirt water out through either of these openings.

Their shells have darker colored rings and have specks of brown covering along the edges of the shell. The geoduck is a unique-looking species, but its color palette is neutral.

While the geoduck is a slow-growing species, it makes a lot of sense considering their lifespan. A geoduck can live for a long period of time. One record even shows a geoduck that lived to be 168 years old. However, most geoducks live to be around 140 years or less.

Female geoducks can reproduce multi-millions of eggs at a single time. The reproduction process for geoducks is spawning. For geoducks, this means that both female and male release their specimens into the water rather than connecting together for insemination.

After this, eggs become fertilized and then start their journey of life as larvae in a matter of several weeks. The growth process following that is the larvae develop into a creature capable of living on the seabed, then getting the capability to burrow, which is what the geoduck’s primary function is.

It may seem like there should be thousands and thousands of geoducks due to the large size of each spawning. However, many of those potential geoducks do not become fertilized. This is one of the reasons why it can be difficult to recover a damaged geoduck population.

The geoduck is a burrowing clam, so you won’t find these guys floating through the sea but instead on the seabed, burrowing their way in. They typically live burrowed down one or more meters in their habitat. Geoducks stay in the same place as they go from larvae to juvenile.

This type of clam lives in soft sediment, including muddy or sandy areas, that allow them to burrow themselves in. They can burrow several feet down over the span of their lifetime.

Where Do Geoducks Live?

Geoduck populations primarily live near the West Coast of the United States. However, geoduck populations go as far north as Alaska and Canada. While many geoducks are farmed, there is also a generous wildlife population spanning across these areas.

Geoducks aren’t much different than other clams when it comes to their diet. Compared to some of the ocean’s wildlife, their diet seems pretty minimalistic. It is composed of a few different substances and a whole lot of water.

What Do Geoducks Eat?

Geoduck’s primary food source is phytoplankton. Phytoplankton is a part of the plankton family. The geoduck relies heavily on its water intake, which goes through one of the two openings on its neck, located at the end of its siphon.

They take in food the same way they take in water. The food they consume comes in through the neck/siphon, and they filter through the water and particles they take in and use what nutrients they need. After that, the rest is sent back out through the other opening in the siphon/neck.

Despite their incredible size and burrowing abilities, the geoduck does have threats, both human and of other species. Of course, one of the most damaging threats to all ocean life is global climate change, but geoducks are a surprisingly useful tool for scientists studying climate change patterns.

Geoducks are farmed by humans and consumed. There are regulations in place for people catching geoduck to keep populations at safe levels.

While it is common for fishermen to hunt recreationally for geoduck, there are regulations set to keep the population numbers healthy.

Some of the regulations set in place to protect geoduck populations are:

Geoducks are specifically useful when it comes to gaining more information about global warming. Geoducks may be an aid to Scientists to tell them more about climate patterns. Studying the rings on a geoduck shell can help us learn more about the climate in the past and future.

The sea otter is one of the biggest threats to geoduck. This is especially true in populations of geoduck in Alaska, where sea otters are a huge threat.

Another less scary and unexpected predator of the geoduck is a starfish, who will feed on the siphon body of geoduck.

There are other threats for the geoduck, like many forms of aquatic wildlife. For example, certain toxins can cause severe damage to geoduck populations. Some of these toxins include paralytic shellfish poisoning toxin and domoic acid. In some regions, it was more common to see more paralytic shellfish poisoning toxins in geoduck that lived in more shallow areas of the ocean.