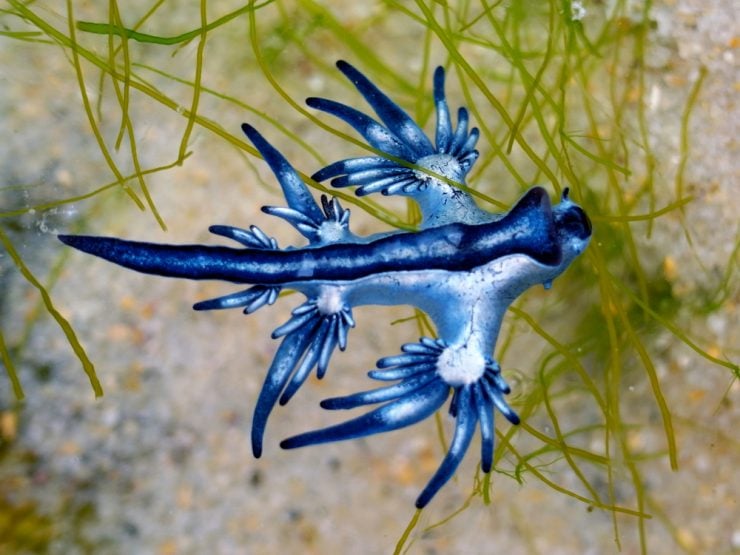 The mythical Blue Glaucus, or Glaucus atlanticus as known by its scientific name, is a small-sized blue sea slug species. It has distinctive dazzling blue hues that have garnered it plenty of attention in recent years. These colors have also inspired a series of nicknames, such as blue dragon, sea swallow, and blue angel.

The species is a master of disguise. The Blue Glaucus uses its brilliant colors to camouflage with the ocean and sky, though it sometimes washes up on beaches and surprises swimmers. It has a reputation for being both angelic and deadly and is best known for eating venomous prey and stealing their toxins.

The Blue Glaucus’ striking appearance makes it easy to recognize, though nearly impossible to identify in its natural habitat.

The Blue Glaucus’ small size belies its dangerous reputation. It may reach lengths of up to three centimeters at maturity, weighing anywhere from just three to one hundred grams.

The Blue Glaucus’ body features a type of coloration known as countershading. Its dorsal side is silvery grey, while the ventral area is dark and pale blue, and its head is covered with dark blue stripes. This coloration affords it valuable protection from predators both above and below it as it floats on the ocean’s surface. The deep blue color may also help reflect harmful UV rays.

Additionally, the Blue Glaucus has a flattened, tapered body, along with six appendages that branch out into finger-like cerata–eighty-four to be exact. Cerata are long, slender structures used to sting when hunting or when the Blue Glaucus feels threatened. It also has radular teeth resembling a knife’s serrated edge.

Though quite content to merely be pulled by the ocean currents, the Blue Glaucus can move of its own accord. It gets around slowly, either by swimming or propelling its body. It can drive its body using muscular contractions or the millions of small hairs on its fleshy foot.

Life expectancy for the Blue Glaucus ranges from between one month to one year.

A curious detail about this sea slug is that they are hermaphrodites, meaning they produce both eggs and sperm. But despite this fact, they still have to mate with another slug to produce viable eggs. Their mating habits resemble those of their hunting habits: the Blue Glaucus simply floats along until they find a mate.

Reproduction is an act they must engage in carefully to avoid getting stung by their partner.

They have long, curved S-shape bends in their penises that keep them safe while mating, which results in the release of strings of twelve to twenty eggs.

Another curious fact about their reproductive habits is where they lay the eggs. Blue Glaucus often deposit them on the carcasses of their prey. Otherwise, they leave eggs on any other floating mass they encounter.

Blue Glaucus are pelagic fish, which means they live in ocean areas that are neither close to the bottom nor the shore. They are found worldwide, dwelling in waters in the Atlantic, Pacific, and Indian Oceans.

However, it seems that their habitat is expanding. There have been many reports of Blue Glaucus sightings in areas not traditionally associated with the species. Some such examples are on the east and south coasts of South Africa, in European waters, near Mozambique, and off Australia’s east coast.

Where Do Blue Caucus Live?

The Blue Caucus prefers to float upside down on the surface tension of the ocean. They swallow air bubbles and store them in their gas-filled sac to maintain buoyancy, and they let the winds and ocean currents carry them. At times, they float to the sand on the bottom of the ocean floor.

Sometimes the winds carry them to undesired locations, namely shores where they can become stranded and die. Beachgoers are increasingly finding the Blue Caucus on their vacations.

This species is a foraging predator with an impressive appetite. It’s quite comfortable feasting on creatures many times its size, thanks to its rasp-like tongue. Its diet consists of other pelagic species.

What Do Blue Glaucus Eat?

While there are many curious things about the blue dragon, perhaps the most curious is what it eats. Its food of choice is a venomous and feared cnidarian, the Portuguese man o’ war. This poisonous ocean drifter looks like a jellyfish, and it has a fearsome reputation.

The Blue Glaucus not only eats it, but it also recycles the stinging cells from the Portuguese man o’ war to use as their own protective devices. The blue dragon has hard disks inside its skin and a protective layer of mucus that protects them against these stinging cells–of which it can amass a significant amount.

For this reason, the Blue Glaucus poses a much greater threat to humans than the Portuguese man o’ war. Picking one up may result in a painful sting and symptoms similar to those of its prey. These include nausea, vomiting, and pain. But like other sea slug species, the Blue Glaucus itself isn’t venomous.

If the Blue Glaucus can’t get its hands on the Portuguese man o’ war, it will consume other pelagic species like the by-the-wind-sailor velella, the Blue Button, and the violet snail (or the common purple snail). Cannibalism is also common, and these slugs won’t hesitate to eat other Blue Glaucus if the opportunity arises.

As is true for most marine animals, the Blue Glaucus faces several different threats to its existence.

Human threats represent a significant danger to the Blue Glaucus. In recent years, the internet has caused the species to become very popular, although its fame has been detrimental.

Many people want to add them to their aquariums, leading to an increase in their appearance in the exotic pet trade. However, keeping the Blue Glaucus as a pet is impractical because of its diet. Obtaining the number of Portuguese man o’ War they need is impossible, and those kept as pets often starve to death.

Climate change is an additional threat the Blue Glaucus faces. More specifically, they are adversely affected by ocean acidification, which is caused by the increase of C02 in the atmosphere. Ocean acidification reduces the numbers of food that the Portuguese man o War eats, eventually harming Blue Glaucus populations.

As mentioned, cannibalism is common in this species, which means that other Blue Glaucus are this sea slug’s most prevailing predators.

But other than the threat from its own kind, not much is known about what kind of natural predators Blue Glaucus has. Few studies regarding this aspect of Blue Glaucus life have been conducted, though loggerhead sea turtles may be one natural predator. A study on this species found that 42% of their stomachs contained remnants of blue dragons.

Finally, pollution represents an ongoing threat to Blue Glaucus survival. Harmful objects can be fatal to this sea slug, as can toxins in trash.

As is the case with most marine invertebrates, there is little information available regarding the conservation status of the Blue Glaucus. Its pelagic lifestyle makes it difficult to assess its risk levels.