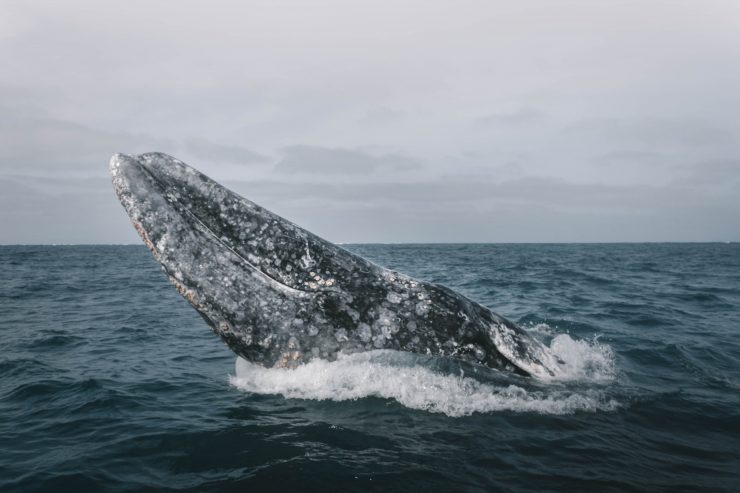 The Eschrichtius robustus, or gray whale, is a baleen whale named for the gray and white patches on its dark skin. Between the 17th and 20th centuries, whalers drove the gray whale to near extinction for its oil. Currently, many organizations work to preserve and restore the gray whale population, particularly in areas where it is considered endangered.

Gray whales stand out from their heart-shaped blow in calm surface conditions. Scientists can identify each one based on their scars, patches, and dorsal surfaces. These markings come from the parasites that attach to them and leave in cold feeding grounds.

The gray whale is an enormous marine mammal, reaching nearly 50 feet in length. Their newborns are about 16 feet while adults average between 44 and 49, with tails about 10-11 feet in width. Their tales have a notched center with pointed ends. Female whales tend to grow slightly larger than males.

Mature whales weigh between 17 and 44 tons depending on their size, making them the ninth-largest cetacean. Cetaceans include streamlined-bodied, carnivorous, and highly intelligent marine mammals, which include toothed and baleen whales.

These sea creatures have dark, gray skin with light gray and white patches on its body. Their mottled and crusty appearance comes from the parasites covering their bodies.

Gray whales have an unusually short, off-white baleen that makes them stand out from other baleen whales. Their baleen plates have bristles that filter prey for them to eat. They have depressions on their upper jaws with one hard-to-see stiff hair, and they have shallow furrows on the underside of their throats rather than on their ventral surface.

Gray whales do not have dorsal fins. Instead, they have 6-12 dorsal crenulations, or knuckles, that lead to their flukes. These protrusions create the dorsal ridge.

The gray whale has a blubber layer with a ten-inch thickness to keep them warm in cold waters. They swim with fan-like flukes that the whale moves up and down to move. Gray whales have a pair of flippers to steer them while traveling.

The reproductive process often involves three or more whales. Females have multiple mates during their yearly ovulation. They ovulate following migration patterns so that they can give birth in warmer waters. Most give birth every one to three years. Males have an increase in the size of their testes when females ovulate.

Female gray whales have a gestation period of 13.5 months. The highly synchronized females typically undergo oestrus in late November or early December, and they give birth in mid-January to baby whales of 12-16 feet in length and weighing 2,000 pounds. The babies are all born within six weeks of each other.

Mothers prefer to birth in shallow waters where their young have fewer predators, like sharks and orcas. The mother whale produces milk composed of 50% fat from their mammary glands to feed their children. The baby whale will drink milk for 6-8 months or until the mother stops lactating. They wean their calves and decrease maternal care at this time.

Gray whales reach sexual maturity after about eight years, where they can begin reproducing. Puberty can happen between ages 6-12. They have a lifespan of 50 to 70 years, but some have lived to nearly 80.

Gray whales live all over the world, but primarily in the North Pacific Ocean. They migrate annually for about two to three months in groups of 20,000 whales. They usually travel between 8,000 and 10,000 miles, but some migration trips may reach 16,000 miles. The gray whales swim slowly throughout the day at about five mph or slower until they complete their journey.

Migration occurs around mating season, so they stay in the warmer waters between November and January. Once at their destination, the whales court each other, and the pregnant ones start to give birth. After mating season, they travel back to the North Pacific Ocean, where they live the other nine to ten months of the year.

Where does the Gray Whale live?

Their migration patterns take them from their feeding grounds in the Chukchi and Bering seas to Mexico’s Baja peninsula or the southern end of the Gulf of California, where they mate and give birth.

Gray whales eat either planktonically or benthically, depending on their location and behavior. They eat benthically by turning on their sides and filtering sediment on the seafloor. Areas with high mysid populations often have many gray whales, who eat the mysids in abundance.

Gray whales feed planktonically by rolling on their right side with their fluke on the surface. They can also eat by skimming the water with an open mouth to feed on crab larvae.

On their feeding grounds, gray whales eat planktonically, but they feed benthically when migrating. As they move from their summer feeding grounds in Northern waters, they opportunistically eat when needed, depending on their fat reserves.

What does the Gray Whale eat?

Gray whales are opportunistic carnivores who can eat planktonically and benthically. Their food includes amphipods, mysids, benthic crustaceans, and planktons, depending on their location. Whales in the western portion of the North Pacific Oceans feed in shallow water on amphipods and isopods. Sometimes they eat deeper offshore on cumaceans and benthic amphipods. Calves drink about 50 to 80 pounds of their mother’s milk each day.

While conservation efforts have lessened their threats, the gray whale still faces predation.

Whale poachers and hunters occasionally attack gray whales. While this issue has decreased since the 20th century, aboriginal whalers may hunt them for their blubber and oil.

Large-scale oil development near the gray whale’s feeding ground threatens whales with pollution and boat collisions. Sometimes they become entrapped in nets off Japan’s coast while migrating, which can harm and drown them.

The only natural predators of gray whales are orca pods. Groups of 3-4 killer whales will ram a calf to separate it from its mother and hold it underwater until it drowns. The mother whale does what she can to protect her young, and humpback whales often assist their gray companions. Approximately 33% of gray whales born each year fall victim to orcas. Sharks can also harm calves, but most attacks come from orcas.

Scientists have speculated that less sea ice has hindered amphipods’ population, lessening their food supply. In areas with fewer amphipods, gray whales sometimes turn to krill, which is far less nutritious and may lead to their deaths.

The gray whale has two different conservation statuses. In the eastern North Pacific Ocean, the IUCN has considered them of “Least Concern” since 2008. However, their population is “Critically Endangered” in the western North Pacific Ocean. The U.S. National Marine Fisheries Service also considers this subpopulation endangered under the U.S. Endangered Species Act, and it removed the eastern whales from the list in 1994.

The western subpopulation is smaller and faces more anthropogenic impacts than the eastern. Nevertheless, international law protects this species from hunting.

Fun Facts About the Gray Whale