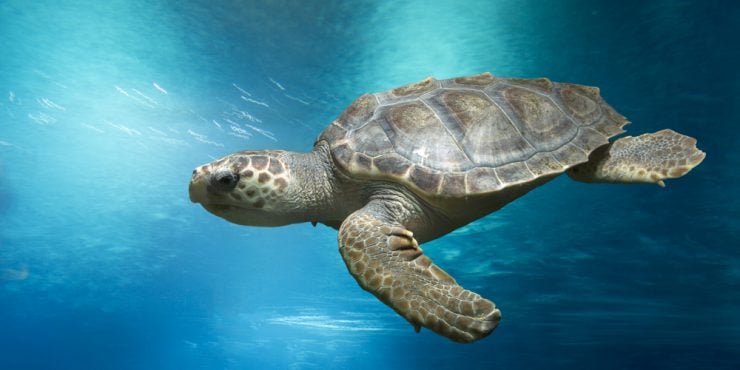 The Loggerhead Sea Turtle is one of the most common sea turtles in the world, living in the Pacific, Atlantic, and Indian Oceans.

They are also the largest hard-shelled turtle in the animal kingdom, even outsizing the giant Galapagos tortoise when they are fully mature.

Loggerhead turtles have all the recognizable turtle characteristics, including a narrow head and hard shell on their back.

What distinguishes them from land and other sea turtle species is their prominent beak and fins instead of feet.

The fins make it difficult for loggerheads to survive on land but make them fast and agile in the water.

They usually travel in groups of several turtles, making them easier to spot and a fun attraction for tourists to watch or swim with.

An adult Loggerhead Sea Turtle can grow up to 90 centimeters long and weigh over 130 kilos.

Loggerheads are the biggest hard shell turtles in the world and can get even bigger than this average.

The loggerhead takes a big jump in size throughout its life. When they’re born, they are only 4.6 centimeters long and weigh just 20 grams.

A loggerhead turtle’s skin ranges in color from yellow to green with a fair underbelly that is off-white in appearance.

Their shells are usually a reddish-brown color. Specialists divide their shells into two sections (the carapace and the plastron), and these sections are divided by the large plates or scutes on the shell.

A typical loggerhead will have 11 to 12 scutes on its shell.

Male loggerheads have longer tails and claws than females.

Loggerhead Turtles begin their lives as eggs buried beneath the sand on a beach.

Once the eggs hatch, the hatchlings make a mad dash for the ocean, attempting to survive predators like seabirds and snakes on the sprint.

Interestingly enough, the sex of a Loggerhead is determined by their egg’s temperature. If the weather is kept constant, females will be born at 32 ℃ and males are born at 28 ℃. At 30 ℃, the litter will be equally divided into males and females.

Loggerhead turtle females reproduce for the first time after they are 17 and then up until they are 33 years old. Their mating period lasts around six weeks, and they lay more than 112 eggs always on the same beach where they were born.

Loggerheads can live more than 50 years, with their average lifespan being 47 to 67 years.

The primary habitat of the Loggerhead Sea turtle is, of course, the ocean.

The animals will spend most of their lives on the water, only returning to land for mating and laying eggs.

In the colder months, loggerheads rarely even go to the water’s surface.

Instead, they remain submerged for up to seven hours at a time, only coming up for about a seven-minute break in between dives.

Where Do Loggerhead Turtles Live?

As we mentioned above, Loggerhead Turtles live in all the world’s most immense oceans (Atlantic, Pacific, Indian) and the mediterranean sea.

They prefer the shallower waters near the coast. Some Loggerheads will even occupy coastal estuaries. The temperature of these waters can range from 13.3–28 °C.

When Loggerhead Turtles first reach the water, they live in pockets of algae called Sargassum to protect them from potential predators.

Loggerheads are omnivores, meaning they eat both plants and animals.

Usually, they feed on the ocean floor, diving down for hours at a time to hunt for scraps and nibbles.

They use their powerful beaks to crush the food and then use their limbs to tear the piece into swallowable portions.

A loggerhead’s digestive system can slow down based on the temperature, getting slower as waters get colder.

What Do Loggerhead Turtles Eat?

When a Loggerhead is hungry for some animals, it usually goes for invertebrates that live on the ocean’s bottom (because they’re easy to chew).

Loggerheads have a long diet list, though, the longest of any sea turtle.

They can eat sponges, corals, squids, sea anemones, barnacles, jellyfish, and many other creatures. For plants, they prefer algae and those of vascular nature.

The most vulnerable time for a loggerhead is at the beginning of its life.

The small turtles are open to threats even after they enter the water. Only in adulthood does the turtle gain its large size and tough shell, making it difficult prey.

Although regulation has slowed the industry, turtle food products and their eggs used to be considered commodities in global trade.

However, international laws have been passed in recent decades to keep turtles safe.

In Mexico, there is still a thriving trade for Loggerhead Eggs, which have aphrodisiacal qualities, according to locals. If you think it sounds tasty, think again.

Turtle eggs have millions of harmful bacteria, including Pseudomonas and Aeruginosa.

Fishing gear is one of the biggest killers of turtles in the ocean. Fishing lines and hooks can get tangles in the turtle’s mouth or shell and lead to painful discomfort and death. Nets and other various traps threaten their livelihood as well.

Many Loggerhead Turtles are at risk of losing their breeding grounds with ocean temperatures rising and various beaches becoming inaccessible due to pollution or human occupation.

Temperature changes also affect the ratio of males and females, which can lead to struggles with mating.

The pacific ocean between Japan and California plays a pivotal role in the life cycle of Loggerheads. This corridor is where turtles born in japan travel to begin their lives on the California coast.

Passages like this exist throughout the Atlantic, Pacific, and Indian oceans. When damaged by plastic or laid with traps, they severely impact the lifespan and number of turtles in the area.

When they’re born, their shells are soft and easily punctured by most seabirds, crabs, mammals, and even insects. Unfortunately, even when they’re adolescents in the water, eels, crabs, and various fishes (like parrotfish) also prey on them.

Nesting females are also susceptible to an attack. When the females are nesting, they need to remain stationary for extended periods, making them available to dogs, flesh flies, and even hungry humans.

Due to their large size and hard shells, adult Loggerheads in the ocean have very few natural predators. However, they have been eaten by large sharks, killer whales, and seals.

Loggerheads are also at risk for a variety of parasites and bacteria, including Pseudomonas and Salmonella. Fungi also attack their hatchlings and nests.

The sea turtles can also experience tumors from a disease called fibropapillomatosis which can cause blindness.

As we mentioned above, habitat corridors and breeding grounds becoming unusable are the biggest threat to Loggerhead safety and survival.

The species has been classified as a vulnerable species by conservation specialists due to their long lifespan/breeding cycle and their offspring’s high mortality rates. In the United States, they’ve been included as a protected species under the Endangered Species Act.

Due to their residence in countries worldwide, many other governments have established policies regarding the turtles, including Japan, Australia, and several African Nations.

Loggerheads have a special gland behind their eyes that helps process salt from ocean water. When the turtles crawl on land, this excess salt is excreted, making it look like the turtles are crying.

They Have an Organ that Helps Them Filter Their Food

In their throats (esophagus more specifically), they have papillae that point inward and are covered in mucus. These papillae help catch unwanted materials like fishhooks and small rocks.