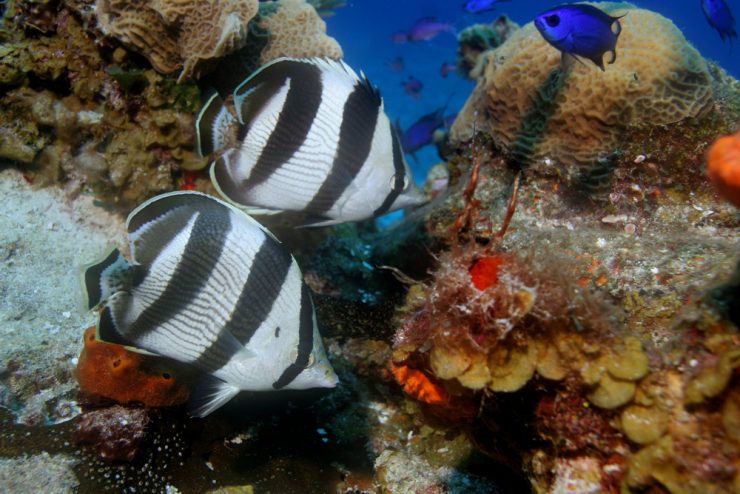 The banded butterflyfish, whose scientific name is Chaetodon striatus, is just one of the many butterflyfish species found worldwide. It has an abundance of different names, and you might hear it referred to as the butterbun, the schoolmistress, the Portuguese butterfly, and the banded mariposa. This small fish has a healthy population size and is not endangered.

Although the banded butterflyfish is significantly less vibrant than most other butterflyfish species, its distinct coloration makes it easy to identify. The “striatus” part of its scientific name refers to this species’ distinguishing feature: its thick, black vertical stripes.

Adult banded butterflyfish can reach lengths of up to 6.5 inches or 16 centimeters long. They are considered mature once they reach a length of roughly 5 inches or 12 centimeters.

The banded butterflyfish species has a mostly white body with a black band over the eye. This black band is accompanied by two more dark bands along each side of the body, with yellow highlights on the fins. It also has a continuous dorsal fin with prominent spines on its back and a characteristic short snout.

Juvenile banded butterflyfish are easy to recognize thanks to their different coloring. These younger fish are more brownish-yellow, which may act as camouflage. They also have an eye-shaped spot on their dorsal fins, an evolutionary adaptation to confuse predators. Young banded butterflyfish retain this spot until they reach a size of roughly two inches, and then it begins to fade away.

Another physical characteristic of this species is its deep, laterally compressed body. This body type allows for easy, quick maneuvering throughout its habitat; it’s less well suited for swimming long distances.

Banded butterflyfish are sexually monomorphic–in other words, males and females generally look the same. However, the males are sometimes somewhat larger than the females.

Banded butterflyfish are thought to have a lifespan of around three years or more–possibly up to five. It’s an oviparous or egg-laying species, though it differs from other reef fish species in that reproduction does not occur in groups. Instead, reproduction takes place between pairs of male and female adults who are most often monogamous.

Spawning happens year-round for some banded butterflyfish, while others that live in tropical waters spawn exclusively in the winter and spring. Those who inhabit temperate regions spawn in midsummer, but this moment of energetic courtship takes place at dusk regardless of location. The fish circle one another and chase each other around the reef in an elaborate mating ritual.

The ritual culminates in a behavior known as broadcast spawning. The male releases sperm into the water column located directly above the reef while the female simultaneously expels anywhere from 3000 to 4000 eggs. This strategy helps avoid predators consuming the fertilized eggs on the reef surface. It also allows the currents to carry the eggs.

The eggs hatch within a day, and when they reach the size of a coin, they settle to the bottom of the ocean floor. After hatching, the larvae grow rapidly and soon take on the color of the juvenile butterflyfish. The juveniles receive no parental care, though they sometimes swim with the adult pairs.

Banded butterflyfish are native to the tropical and subtropical western Atlantic Ocean.

They live on coral reefs, either singly or in pairs, and have quite an extensive range. Their habit extends from Massachusetts in the United States to Rio de Janeiro in Brazil. The species can also be found in the Gulf of Mexico, the Caribbean, and the eastern central Atlantic Ocean close to St. Paul’s Rocks.

Where Do Banded Butterfly Fish Live?

This marine or saltwater fish is found mostly in shallow regions of tropical waters, typically in depths of less than 66 feet (20 meters). However, they can also be found at depths of up to 180 feet (55 meters).

Banded butterflyfish are diurnal, meaning they are active during the day, and they spend most of their active hour lazily searching for food. They are considered benthic or bottom foragers, and they hunt visually.

The banded butterflyfish is a predator, and adults often form plankton-feeding aggregations that reach up to twenty individuals. But despite being a predator, they employ various feeding strategies.

What Do Banded Butterfly Fish Eat?

The diet of the banded butterflyfish is varied and can be either carnivore or omnivore. Their food sources consist of small invertebrates, polychaete worms, coral polyps, crustaceans, and various eggs.

Like many wild fish, the banded butterflyfish must contend with a range of threats and predators.

Of all the threats this species faces, humans represent an insignificant one. Since people do not eat banded butterflyfish, they only capture the fish to display them in aquariums. This practice does not currently pose a danger to their survival at the moment, but experts continue to monitor the number of butterflyfish being caught as a preventative measure.

On the other hand, global warming represents a far more severe threat for coral reef fish like the banded butterflyfish. Coral reef fish already live close to their thermal limits, which means they will easily succumb if waters warm just a few degrees. Global warming also threatens to destroy their habitat and food source, putting them in grave danger in the coming years.

Banded butterflyfish are usually hunted by predators like sharks, moray eels, and other large reef fishes.

They search for shelter at night to reduce their vulnerability to these predators. During the day, the banded butterflyfish employs other strategies. If it feels threatened, it will first try to leave the area. However, if no escape plan is available, it assumes a defensive position. The fish will face its aggressor with its dorsal spines fully erect and its head lowered to intimidate.

There are currently no other significant threats to banded butterflyfish.

The conservation status of the banded butterflyfish is favorable. It is currently not an endangered species, and the population is deemed stable as it is abundant and widely ranged. Additionally, banded butterflyfish are not dangerous to humans. They generally ignore divers, and they will swim away if approached.

As mentioned, humans sometimes harvest the species for the reef aquarium trade. The practice is believed to have little effect on the overall population, mostly because banded butterflyfish are difficult for aquarium keepers. Their unique diet is challenging to replicate, which has prevented them from becoming too popular and disrupting their numbers.

The International Union for Conservation of Nature rates the banded butterfly fish’s status as being of “least concern,” and populations are present within several protected marine areas. However, it’s vital to continue to watch these numbers to ensure that any adverse changes can be identified before they become a problem.