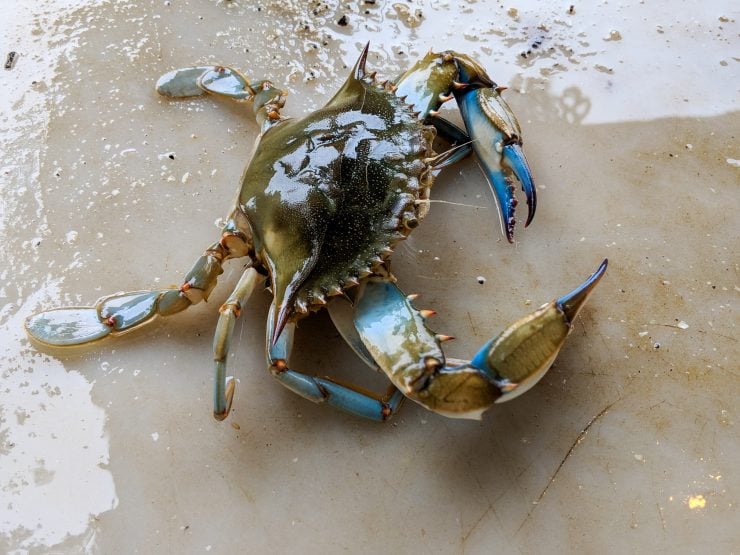 Aside from being a popular dish for people to eat, these electric blue crabs are the most crucial parts, economically, to some of America’s fisheries. They’re small but mighty, well, not only in appearance but also in their scavenging.

What is a Blue Crab?

While there are many different crabs species, the Blue Crab is distinct in its bright blue coloring legs. They can be widely found from the Atlantic and Gulf coasts to Nova Scotia and even to Uruguay in coastal lagoons.

The Blue Crab is a strong swimmer with a fifth pair of paddle-like legs to help them move quickly and efficiently.

Like most crabs, the Blue Crab has claws, although these claws are tipped with bright red for the female Blue Crabs. Female Blue Crabs also differ in size from their male counterparts by about a few centimeters or so. A large male can reach up to nine inches.

The scientific term refers to the crabs’ swimming strength and their succulent meat that has become a coveted dish for humans.

What Do Blue Crabs Eat?

Blue Crabs are scavengers and hunters. They primarily eat clams, oysters, insects, mussels, worms, fish that have recently died and have been known to eat other crabs on occasion.

They claw open otherwise closed organisms such as clams, oysters, and mussels to reach the nutritious center with their sharp, pointy pinchers.

One of the most fragile ecosystems of which Blue Crabs inhabit, the Chesapeake bay, is predicted to increase carbon pollution if global climate change remains unchanged. This change will not only affect the way Blue Crabs grow but the way they eat.

An influx of carbon pollution to the waters will eventually cause Blue Crabs to grow larger shells. In turn, the Blue Crabs will become larger and, therefore, more aggressive predators.

In their estuaries and coastal lagoons, these crabs are prey to larger predators such as sea turtles, birds, and sometimes larger fish.

However, when Blue Crabs are born or in their larval stage, they are smaller and more vulnerable to a wider variety of predators such as smaller fish and jellyfish.

These crabs are also heavily harvested by humans for their savory meat, so much so that they have become a vital part of the Gulf’s economy. Fisheries in the Gulf, such as Louisiana, contribute a quarter of the United States’ Blue Crab market.

The Life Expectancy of Blue Crabs

Blue Crabs have a life expectancy of only three to four years. During this time, they partake in a large mating ceremony between May and October where the female Blue Crab will produce millions of new crabs.

While not all Blue Crabs will survive infancy or the larval stage because of predators and other circumstances, thousands will live to repeat the cycle of scavenging and reproducing.