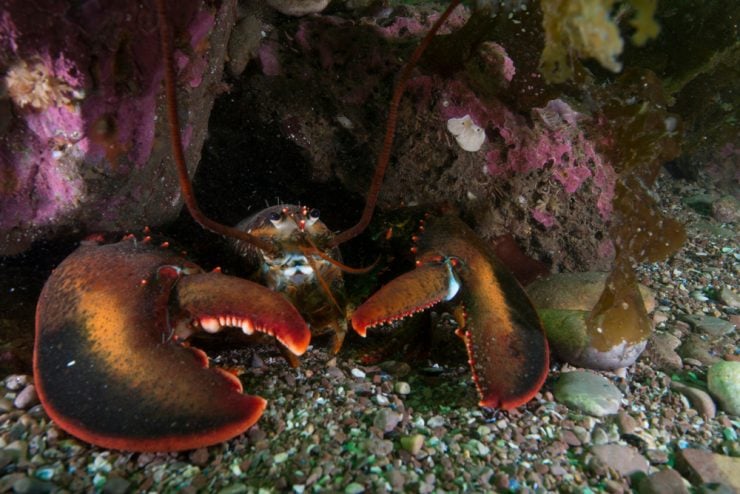 The American lobster (Homarus americanus) is a crustacean species found on the Atlantic coast of North America, found from Labrador, Canada to Cape Hatteras.

The average length of an American lobster is 8 to 24 inches. An average male is about 9 inches long. The longest lobsters can reach 25 inches, making them also the longest decapod crustacean in the world.

People recognize American lobsters by the large round claws. Each claw serves a different purpose. One claw has rounded nodules to crush prey, while the other has sharper edges, which help to hold and tear prey.

The other prominent feature of the American lobster is its antennae. Two long antennae sticking out of the front of the lobster’s head. American lobsters use small hairs on their antennae to smell. An American lobster has a keen sense of smell and can detect which direction smells emanate. It helps them find food and mates and warns them of dangerous rivals and predators.

American lobsters, like many crustaceans, have ten swimmerets, or pleopods. Two of them are their giant claws. The rest are used for swimming or crawling along the ocean floor.

American lobsters are red only after they are cooked. In the wild, they are blue-green to reddish-brown. The shells have speckles of yellow, blue and red. In rare instances, American lobsters can be blue, white (albino), yellow or orange and can also have a strange split-color vertically down the middle. These rare sightings are due to genetic mutations. Social media and news outlets often report these rare instances.

American lobsters have an incredibly long lifespan. If they aren’t caught in lobster fishing traps and succumb to predators or disease, American lobsters can live for 100  to 140 years, and they never stop growing. Their lifespan dramatically surpasses that of their relative, the Caribbean spiny lobster, because of water temperature. Sea creatures generally live longer in cold water.

Lobsters molt. That means they shed their hard shell-like exoskeletons as a new one grows underneath. Female lobsters mate soon after molting when their shell is soft. After a courtship, which involves dance, the male will insert sperm into the female’s seminal receptacle with its legs (pleopods). The female will hold the sperm for many months.

When the female releases its eggs, it passes by the sperm, and the eggs get fertilized. The female stores the eggs on its belly for as long as 11 months. When the eggs hatch, the adult female sets them free into the ocean by flipping its tail. The larvae are only ⅓ of an inch long and are susceptible to predators. They look more like swimming shrimp than lobsters.

They often molt and reach a stage where they undergo metamorphosis and resemble tiny adult lobsters and begin living on the ocean floor. They continue to molt and grow, although less frequently and rapidly. Lobsters that are big enough to catch for food have molted as many as 27 times.

Where Does the American Lobster Live?

American lobsters live in the North Atlantic Ocean, off the east coast of North America. They have a limited range from Labrador, Canada in the north, to North Carolina in the south. However, sightings south of New Jersey are quite rare.

The species prefers shallow, cold water (less than 68F) in depths ranging from 13 to 160 feet and hides out under rocks. They can live in depths of up to 1,500 feet. When they are not mating, lobsters are solitary animals and guard their territory.

What Does the American Lobster Eat?

American lobsters hunt their prey at night when there are fewer predators. Mainly they scavenge for dead animals on the seafloor. However, American lobsters also use their strong claws to crush marine life with hard shells such as mussels and other mollusks, starfish (echinoderms), and sea worms (polychaetes).

Humans provide an alternate and popular food source for American lobsters, which is herring used in lobster fishing traps. Most lobsters that enter fishing traps eat the bait and escape, enjoying a free lunch.

Humans are American lobsters’ main predators, as they are harvested for food. Lobster is the most valuable fishery in North America. In 2019 fishing fleets pulled 126 million pounds of lobster from the Atlantic, with a $630 million value.

Evidence suggests warming ocean temperatures have led to a condition that causes minerals to accumulate on the lobster’s bodies, which causes them to suffocate and die. Warming oceans also makes lobster more prone to disease and problems with reproduction. Lobsters prefer water that is below 68°F. As they retreat from warmer waters, lobster fishing industries along the United States coast have collapsed.

American lobsters are slowly moving northward as ocean temperatures rise, particularly in the waters off Maine, which will lead to further economic problems. It’s unknown how ocean acidification due to global warming will affect American lobster populations. There is also evidence that water temperature above 68°F causes respiratory distress in lobsters and makes them more prone to shell disease.

Besides humans, fish such as flounder and cod, eels, and seals all eat American lobsters. Lobsters are mainly nocturnal and hide from predators under rocks during the day. If confronted by a predator, a lobster will fight aggressively with its claws.

American lobsters are prone to disease and infection. Certain types of bacteria are fatal to lobsters and can cause health issues such as black lesions, lethargy, respiratory problems, and death.

The American lobster currently enjoys a stable population and is not considered endangered or threatened, despite its rapid migration northward. The lobster fishing industry is highly regulated to ensure a healthy population, with stricter regulations in southern areas where populations are decreasing.

Fishing crews must release a female lobster caught with eggs on its belly. These lobsters are identified with a small V-shaped cut in their tail, which indicates whether the animal is a protected breeding lobster.