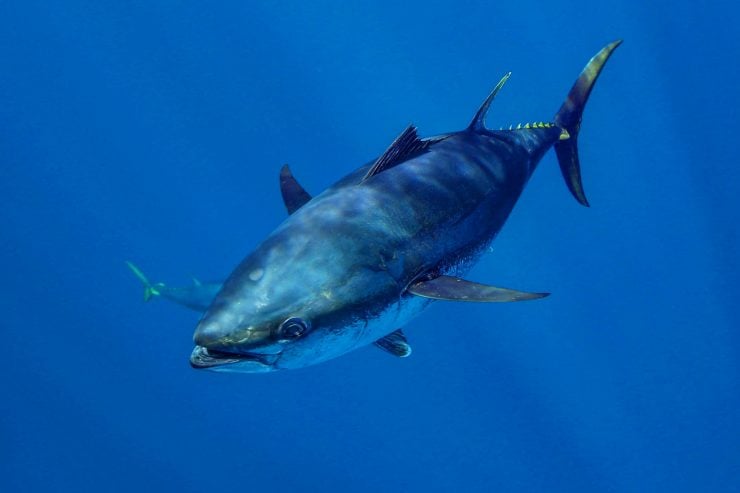 The Atlantic Bluefin Tuna, known scientifically as Thunnus thynnus, is a tuna species and is native to the Western and Eastern Atlantic Ocean and the Mediterranean Sea. They can also be referred to as “Tunny” for short.

They are considered an endangered species globally and are known for their speed and endurance. They have extreme stroke efficiency from the rigidity of the body and can dive deeper than 3000 feet.

Bluefin Tuna have a robust torpedo-shaped body, a cone-shaped head, and a very large mouth. The placement of the eyes allows the Bluefin Tuna to navigate its surroundings easily. Compared to other tuna, Bluefin Tuna are more muscular due to a pair of tendons in the caudal fin. One unique characteristic is the shorter length of pectoral fin and tail. The short pectoral fins make them excellent swimmers. 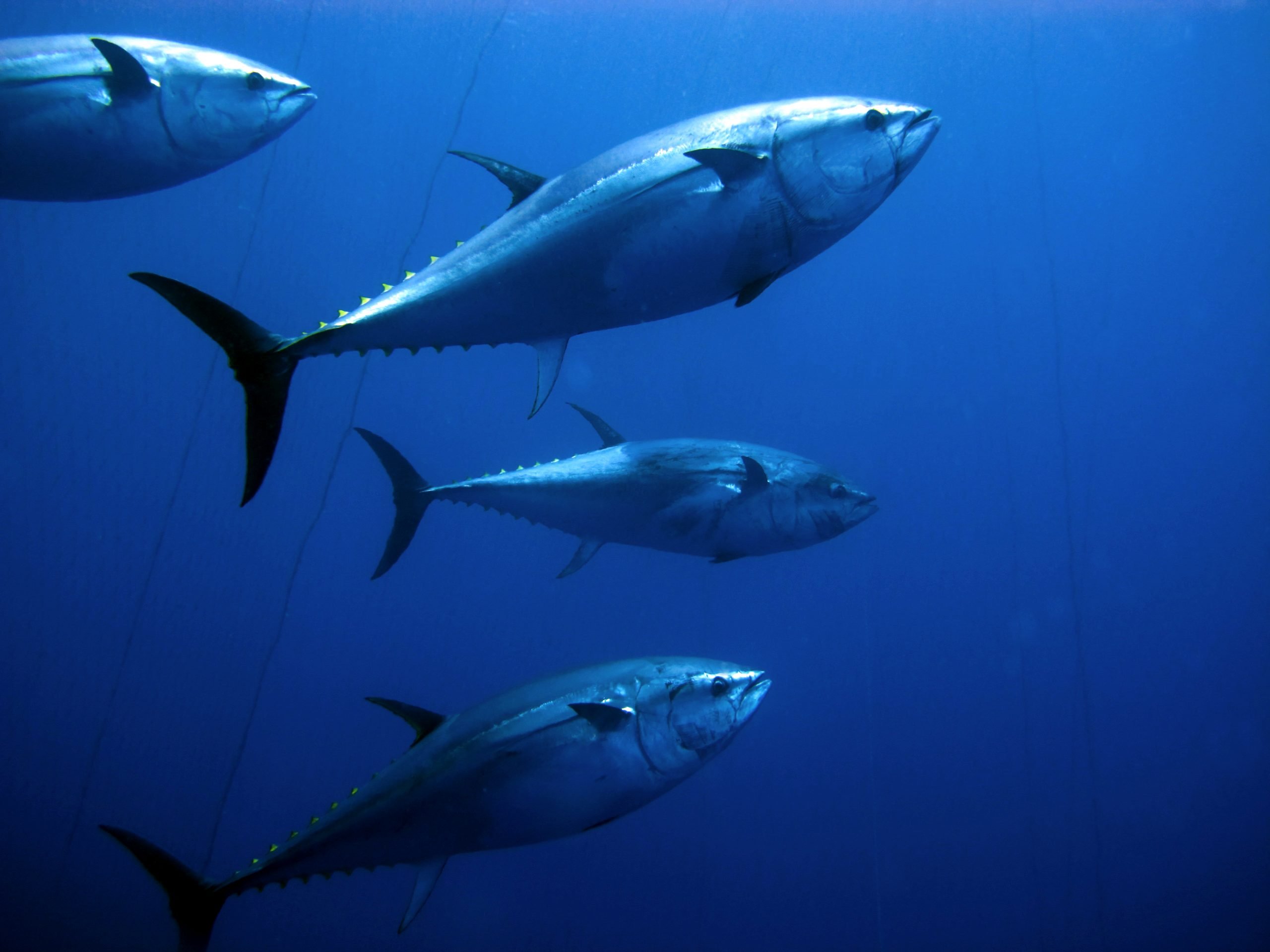 Atlantic Bluefin Tuna is known to have dark blue coloring on the top and a grey or shimmering white coloring below. They also appear to have a gold shimmer to the entire body. These colors assist in camouflaging them in the similarly colored ocean waters. In contrast, their meat is a dark red color. Atlantic Bluefin Tuna have rows of upper and lower needle-like sharp teeth, and their livers are covered in tiny blood vessels.

Atlantic bluefin tuna use a mechanism referred to as countercurrent exchange to keep its core muscles warm and prevent the loss of heat when swimming. They are most unique due to the ability to thermoregulate by transferring warm blood to cool oxygenated blood. 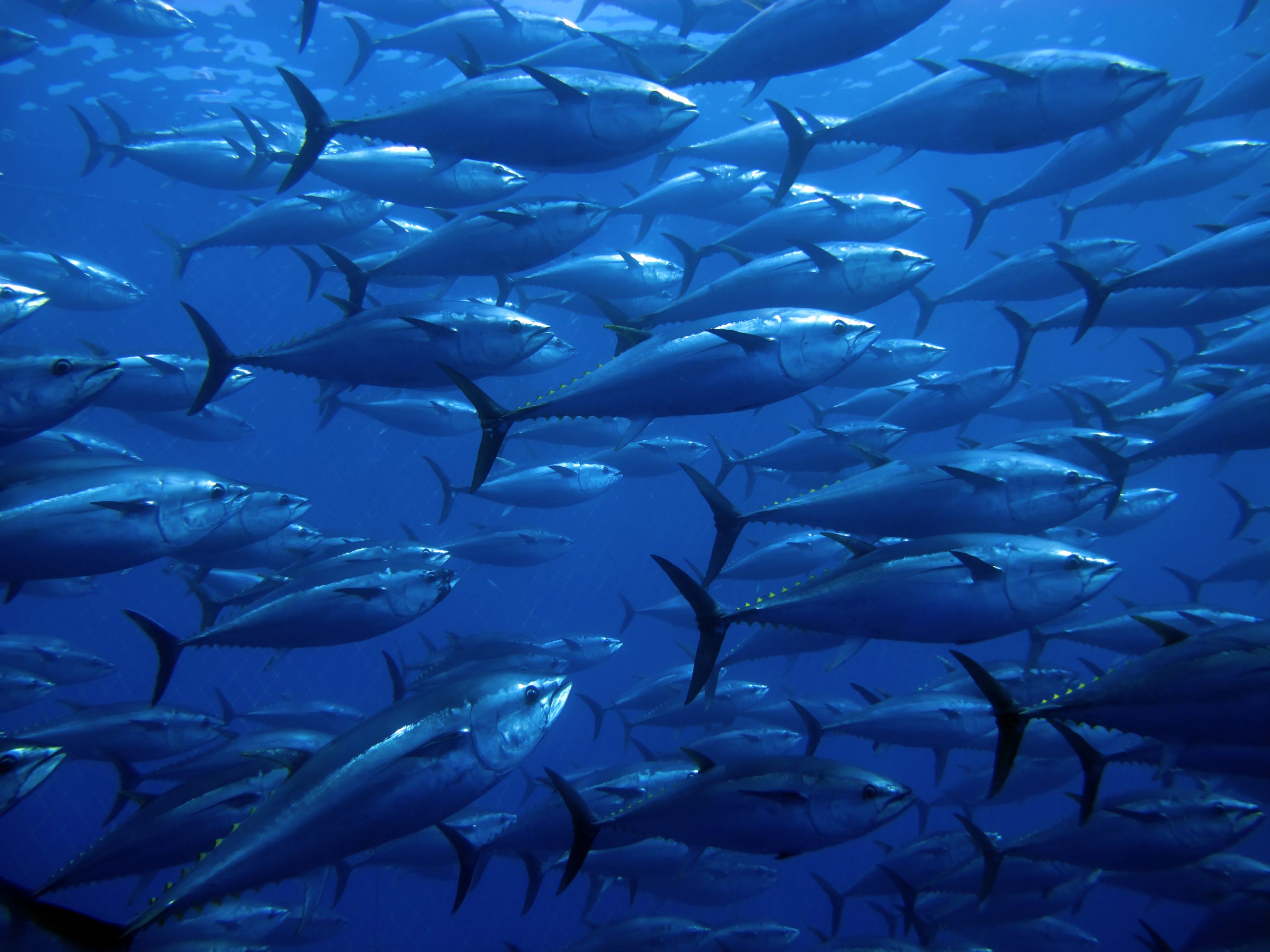 Bluefin Tuna’s average lifespan is approximately 15 years; however, researchers have found some Bluefin Tuna to be close to 50 years old. Within three to five years, they reach their full size and full sexual maturity.

Satellite tracking systems have proven that spawning groups gather together in large formations and have been observed in the western Mediterranean and the Balearic Islands. Although they span the entire Atlantic Ocean, they are known to return to the same area when spawning.

Female Bluefin Tuna have been known to produce up to 30 million eggs. The amount of eggs they produce depends on their age and size. Male and female Bluefin Tuna release millions of sperm and eggs into one water channel to lessen the possibility of all of the eggs getting eaten by prey. This also increases the likelihood of the eggs becoming fertilized. Luckily the eggs start to hatch after only 2 days. 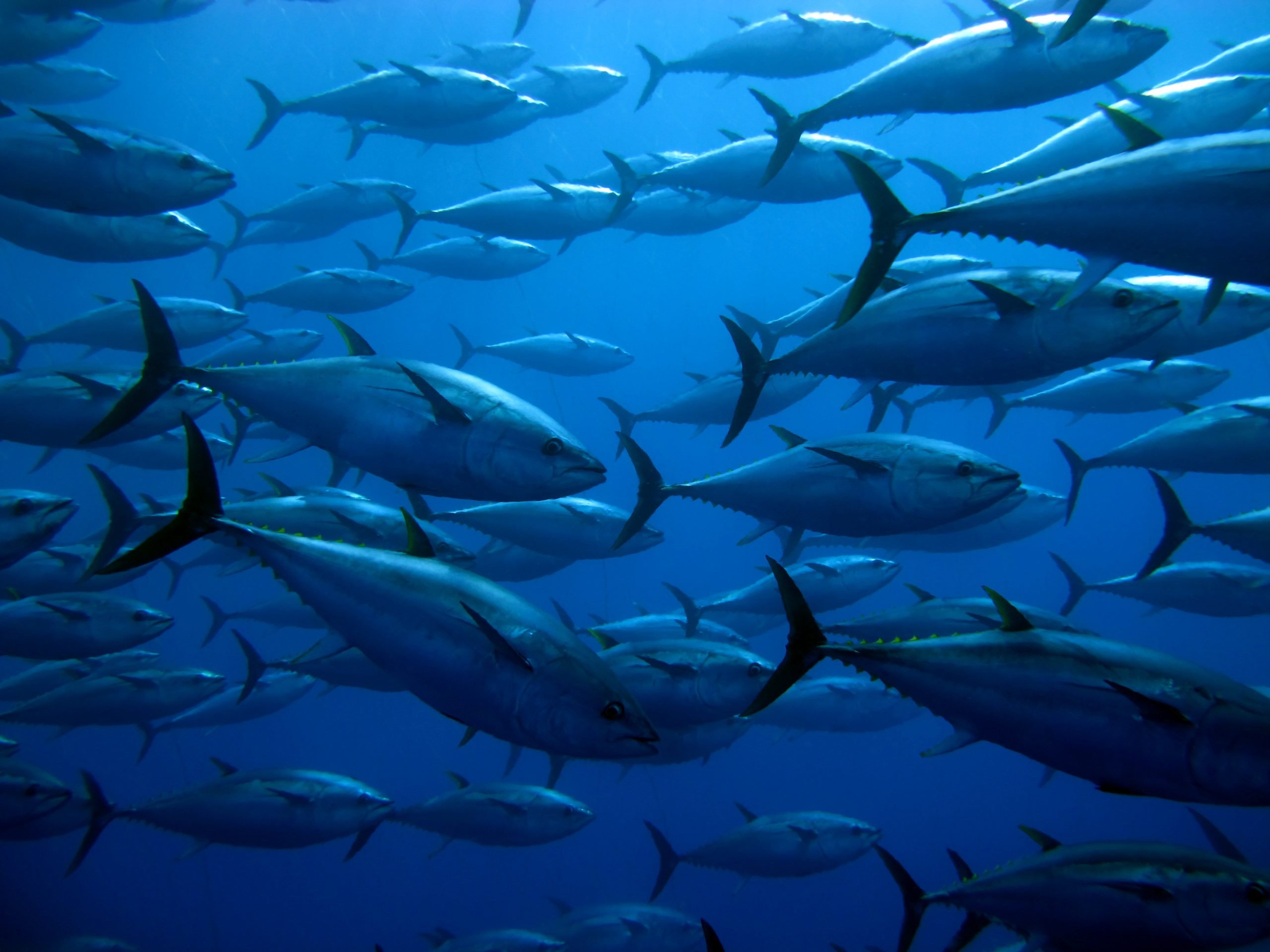 Where does the Atlantic Bluefin Tuna live?

Bluefin Tuna enjoy both cold water and tropical water. They span from North American water all the way to European waters throughout the year. Atlantic Bluefin Tuna is known to live in both the Eastern and Western Atlantic ocean. They are most likely to be found in the Gulf of Mexico and the Mediterranean Sea.

They are known to be flexible and often change their area of concentration and migration routes due to their ability to thermoregulate their body temperature and live in various seawater temperatures.

What does the Atlantic Bluefin Tuna eat?

Atlantic Bluefin Tuna are carnivores and have a large appetite. They eat various ocean life such as small fish, squid, crabs, lobster, and other crustaceans. Bluefin Tuna are known to be predators from the day they hatch, and they prefer mackerel, herring, and eels schools.

They use a filter-like process of feeding to eat small organisms and zooplankton. They prefer to swallow their meals whole. Their prey increase in size as they grow. And since they grow at such a rapid rate, Atlantic bluefin tuna require a lot of food, but luckily they have a wide range of choices of prey.

The most popular Tuna fishery is located in the Mediterranean Sea. Luckily the NOAA has placed regulations on fisheries to preserve Bluefin Tuna. Electronic monitoring systems gather data on the fisheries’ activities to keep a close eye on their intake. Many people are arrested yearly for not following proper regulations when fishing for Bluefin Tuna.

A fisherman must use a heavy rod, reels, and harpoons to reel in these large fish. They are considered amongst one of the biggest games in the ocean and sought out by sports fishermen. 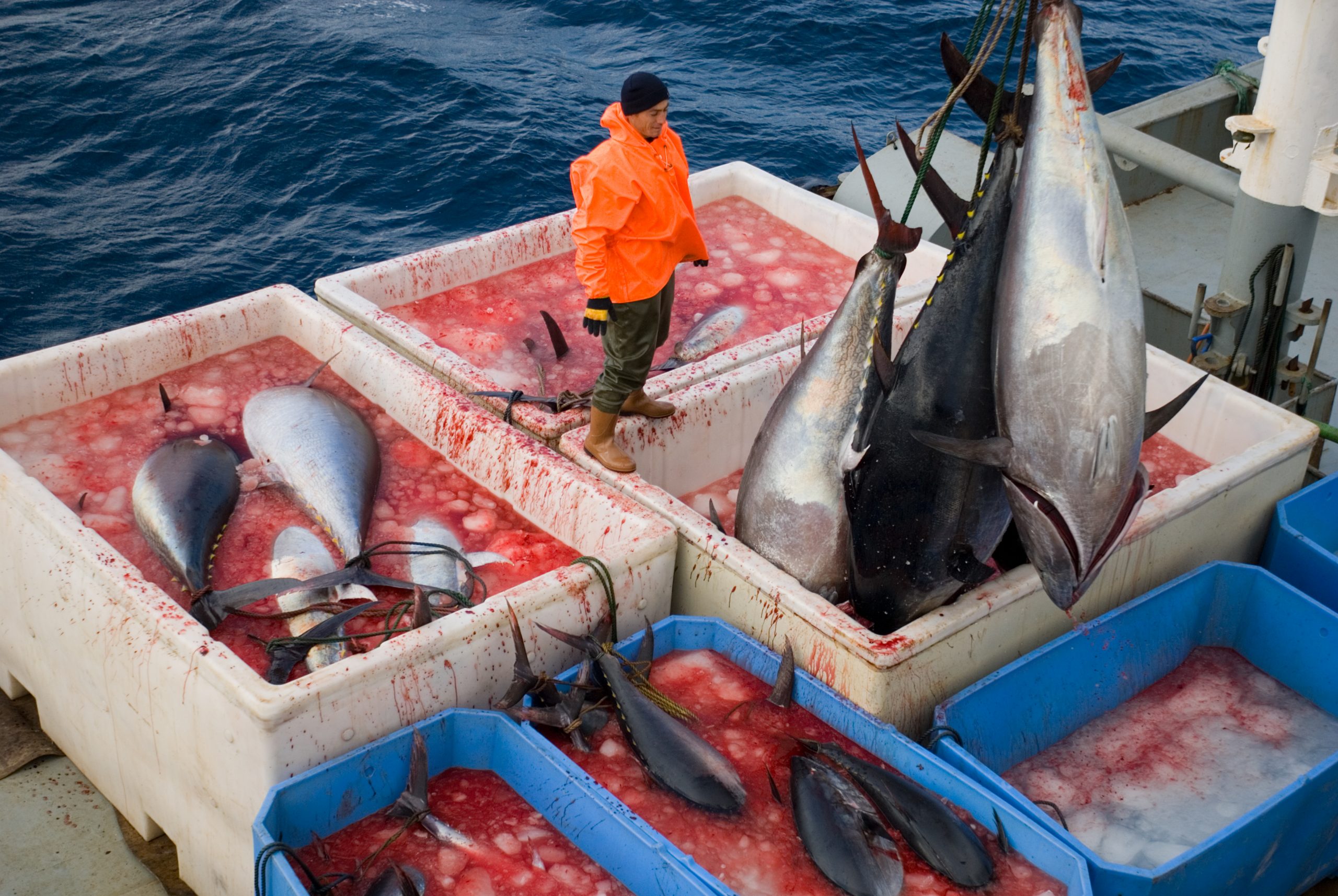 Global temperatures are rising, which is affecting marine habitats from a decrease in oxygen and carbon in oceans. The seawater is getting warmer. This can affect the Bluefin tuna’s ability to swim, spawn and lay eggs. Researchers have found that the eggs are less likely to survive in the warmer water and prefer cooler water. This change in the ecosystem of the ocean affects many species of fish, which plays a large role in the food chain for the Atlantic Bluefin tuna.

Rising global temperatures are indirectly affecting fisheries and the economy due to the decreasing populations of Bluefin tuna and many other fish.

When hatched, Atlantic Bluefin Tuna are often eaten by a wide variety of other fish. If they are lucky enough to survive, their biggest predators become sharks and whales.

Due to the release of millions of eggs into one water channel, there is a much higher chance that many of the eggs will get eaten by predators.

Japan has been proven to pay the highest prices for this delicacy, especially since sushi became a popular and luxurious dish and inflated this market. The price for a 1000 pound fish could be close to $200,000. The high demand for this popular tuna results in it being one of the most highly competitive markets and overfished Tuna type.

Regulations have been put in place to control the overfishing of this species and place more strict fishing limits. In 2010 the United Nations rejected an effort to place a total ban on Atlantic Bluefin Tuna fishing and trading but was not successful. The fish population has increased over the last few years, thanks to some of the stricter limitations put in place.

Tuna are a major source of income and security for millions of people. Governments and researchers estimate that commercial Tuna fisheries bring on close to $42 billion per year. 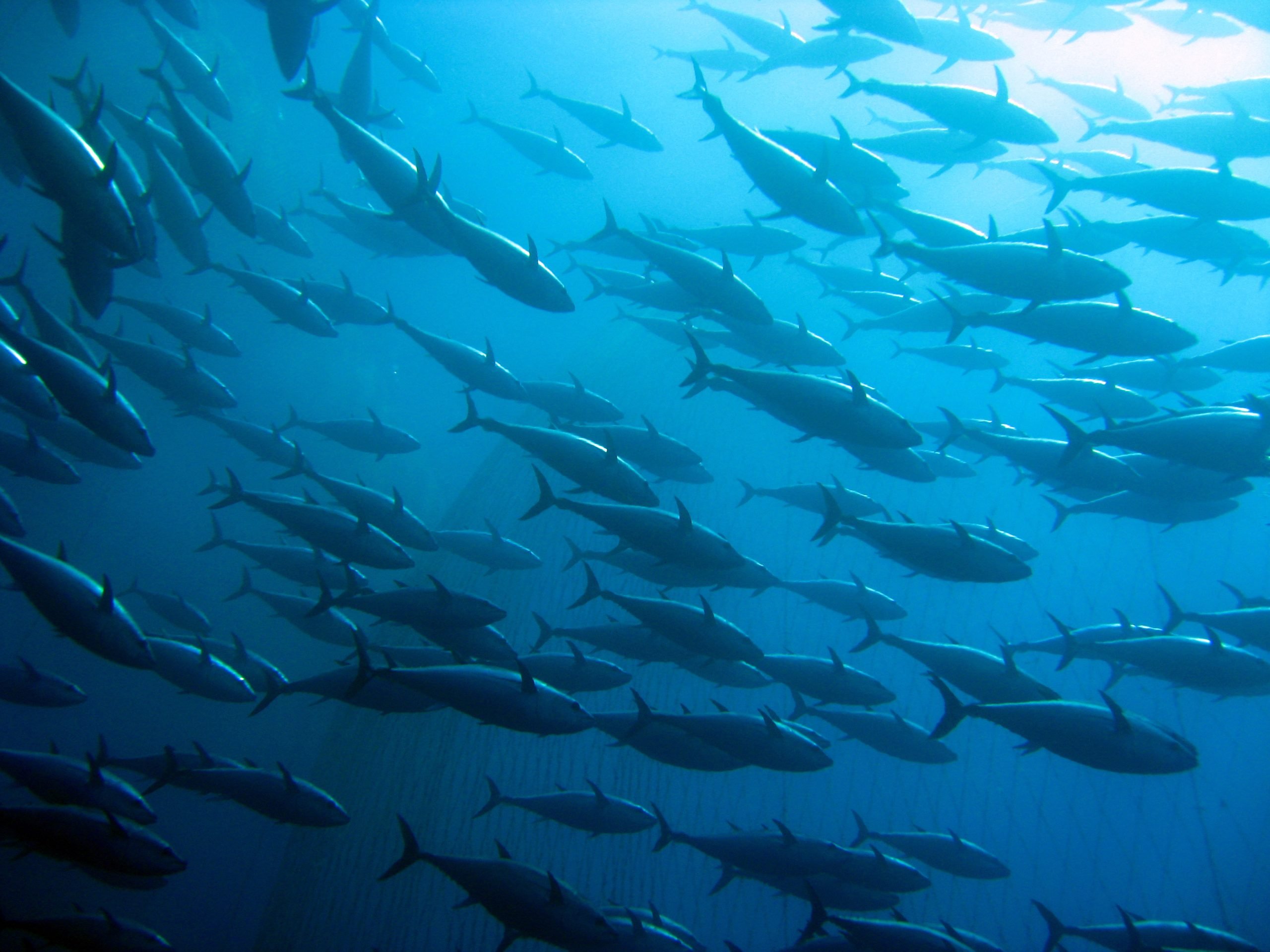 The Largest Tuna Ever Recorded