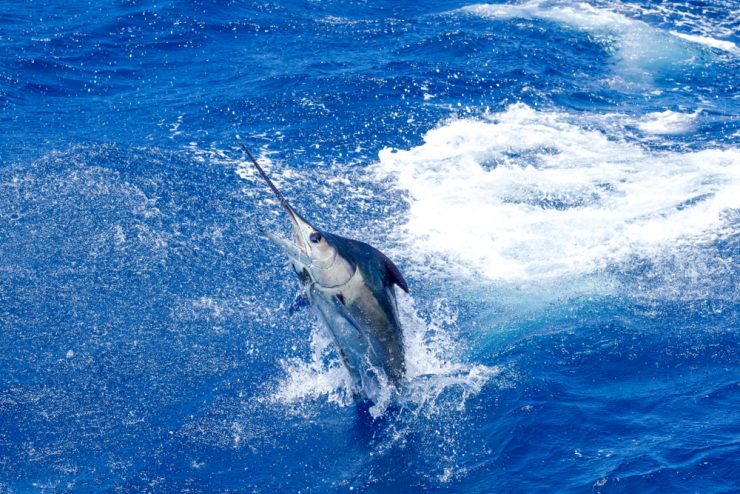 It is easily one of the fastest-moving ocean creatures, and because of its coloring, also the most distinctive. Large, blue and striking, blue marlin fishing competitions continue to be a staple of the fishing community, as people vie to catch this famously large fish.

Perhaps because of their size, Atlantic blue marlins are habitually solitary, preferring to travel independently through the water rather than in schools. They do occasionally join up with other marlins and hunt in groups.

The Atlantic blue marlin is measured from bill to tail and can grow to be 5 meters long, approximately 14 feet, or twice the size of a 6ft human male. Typically the females are bigger and heavier than the males and grow to be approximately four times longer than their male counterparts. The female blue marlin may weigh up to 2,000 pounds.

Atlantic blue marlins are highly distinctive fish. They have a cobalt blue dorsal, or topside, which gives them their name. Their ventral, or underside, by contrast, is a silver-white color. Their most remarkable feature is their pronounced upper jaw, which extends to a sharp, spear-like bill. This is long, sturdy, and used to wound prey.

The belly of the blue martin is flanked by blue stripes. These stripes are a lighter blue than the marlin’s body and feature distinctive dots and/or bars on them. The exception is the membrane of the dorsal fin, which is dark blue and unmarked.

The pectoral fins, found on the sides of the Atlantic blue marlin, can be brought flush against the body of the marlin. They are elongated and narrow. It also possesses 24 vertebrae that help facilitate rapid swimming through ocean currents and water more generally.

The female Atlantic blue marlin reaches sexual maturity once she achieves a weight of 265lbs, whereas the males take three years to fully sexually mature. Once matured, the female lays up to 7,000 eggs over the course of the mating season.

Atlantic Blue Marlin larvae are described as having ‘large eyes and pectoral fins.’ Although the blue marlin grows to terrific size, the marlin eggs are small, transparent, and microscopic, measuring a mere 1mm in diameter.

At this stage, they have no bill; this develops with maturity. Typically the Atlantic blue marlin spawns near Cuba. This transpires between the months of May and November. The larvae then hatch a week after spawning. Only 1% of the eggs and larvae survive; the remainder are eaten by sea creatures.

Where does the Atlantic Blue Marlin live?

Atlantic Blue Marlins prefer the deep water of the outer ocean for swimming and living in. Scientists call this bluewater. Blue marlins naturally gravitate towards the warmer, more tropical waters of the Indian, Pacific and Atlantic Oceans, where they swim close to the surface. They can live in these tropical environs year round but can also be highly migratory, following ocean currents and hunting for schools of surface-swimming fish.

Typically the Atlantic blue marlin will move towards the equator during the winter and away again during the summer.

What does the Atlantic Blue Marlin eat?

Because the blue marlin prefers warm, surface water, it predominantly eats surface-dwelling fish such as tuna and mackerel. But the Atlantic Blue Marlin will also dive deep to eat cephalopods, such as squid. It will also eat dolphinfish. Whatever the prey, blue marlins are heavily reliant on their eyes to spot their victims and perform the majority of their hunting during the day.

To capture its prey, the Atlantic Blue Marlin weaponizes its long, sharp bill, using it to cut swathes through schools of fish, injuring or killing them. The Blue Marlin then swims back to eat its stunned and injured prey.

The Atlantic Blue Marlin has highly fatty meat, which makes it popular among the angler community as a game prize. Commercial fisheries also frequently snare this massive fish, contributing to the population’s ongoing decline.

Overfishing has exacerbated the killing and capturing of Blue Marlins, putting their survival at still further risk. This is a particular problem in the regions of the Caribbean, Japan, and Cuba.

Because of their at-risk status, commercial fishing of the Atlantic blue marlin is prohibited in North America. Any blue marlins caught must be released to preserve the ocean’s ecology.

Blue martins are suffering from decreased habitat as a result of climate change. Because the blue martin is so large, it needs incredible amounts of oxygen to survive. As oceanic dead zones grow, however, that oxygen diminishes, resulting in an under-oxygenated environment and, therefore, uninhabitable areas of ocean.

The decrease in habitat is reflected in a similar decrease in the blue martin population. As the oxygen compresses, they struggle to breathe, and like their habitat, become hypoxic.

Owing to its large size and sharp bill, the Blue Martin has few natural predators. Its primary threats are white and shortfin sharks. Young Atlantic blue marlins, however, are at much higher risk of open-sea predators and larger aquatic mammals.

Other threats to the Atlantic  blue marlin include increased boat traffic, which risks collision with the marlin. It also causes pollution, which is detrimental to the blue marlin habitat and jeopardizes their survival. The other major threat to Atlantic blue marlins is bycatching. Bycatching occurs when the marlins are snared with other fish, most commonly tuna.

As instances of industrial fishing and pollution continue to rise, the status of the blue marlin is becoming increasingly at risk and its environment inhospitable.

With its population steadily declining, the Atlantic Blue Marlin is considered by conservationists to be a threatened or vulnerable species. According to the NOAA Fisheries, however, the Pacific Blue Marlin, which shares many features with its Atlantic cousin, is ‘above population level’ and can be sustainably fished. They also advise that since the 1990s, the Atlantic blue marlin population is 31% lower than it should be.