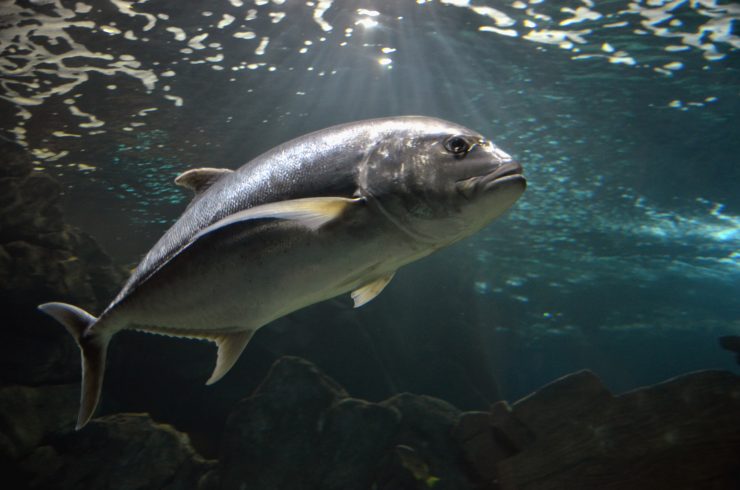 What is the Biggest Atlantic Bluefin Tuna Ever Recorded?

How Big Can Atlantic Bluefin Tuna Get?

To put it in one word: huge. And that word might even be an understatement in this context.

Atlantic bluefin tuna are some of the largest fish species in the world, reaching an average length of 6.5 feet and an average weight of 550 pounds.

And those are just average figures!

Generally speaking, the Atlantic bluefin tuna is accepted as the largest tuna species in the world.

To illustrate just how large bluefin tuna can be, some have clocked in at 1500 pounds and at lengths of close to 8 feet, making it easy to see why this massive fish is highly coveted by fisheries and used to feed whole populaces in cuisines all over the world.

However, this desire for bluefin tuna meat has led to overfishing in many cases, which has put the species at some risk in terms of long-term survival.

Why are Bluefin Tuna so Big?

Bluefin tuna have insatiable appetites and a wide-ranging diet, meaning they consume nearly everything they come into contact with.

A bluefin’s habitat is the ocean, so naturally, they feed on smaller fish, crustaceans, squids, eels and a multitude of other sea creatures.

So varied is a bluefin tuna’s food palate, in fact, that it is even considered to be an apex, or alpha predator. In other words, they have no one above them on the food chain.

Considering what they eat and how much, it’s not surprising that bluefin tuna are as colossal as they can be in many instances.

There have been some enormous Atlantic bluefin tuna catches in recent history.

The largest one currently on record belongs to fisherman Ken Fraser, who caught a bluefin tuna off the coast of Nova Scotia, Canada in 1979.

That fish weighed in at an astounding 1,496 pounds! To this day, no fisherman has ever come close to matching this world record bluefin tuna catch.

It reportedly took Fraser 45 minutes just to reel it in and another 10 hours to dehydrate the fish due to all the seawater it consumes. What a story!

Most of the largest Atlantic bluefin tunas have been caught, not shockingly, off the eastern seaboard of Canada.

Another big one was caught off the coast of Prince Edward Island, nearby Nova Scotia, just a year before the 1979 record catch. That bluefin weighed a whopping 1,178 pounds!

In 1985, a 1,116 pound bluefin tuna was reeled in by fishermen, also off Prince Edward Island.

So chances are, if you’re looking to catch an Atlantic bluefin tuna, Prince Edward Island and Nova Scotia appear to be prime destinations.

The Atlantic bluefin tuna is a massive fish species, the largest of the tuna and one of the largest among all fish types in the world.

Their gigantic size and speed can make them hard to capture, but when accomplished, they can turn into an instant fortune for fisheries.

With some of the record catches measuring in at over 1,000 feet each, the Atlantic bluefin tuna is truly one of the kings of the marine ecosystem.