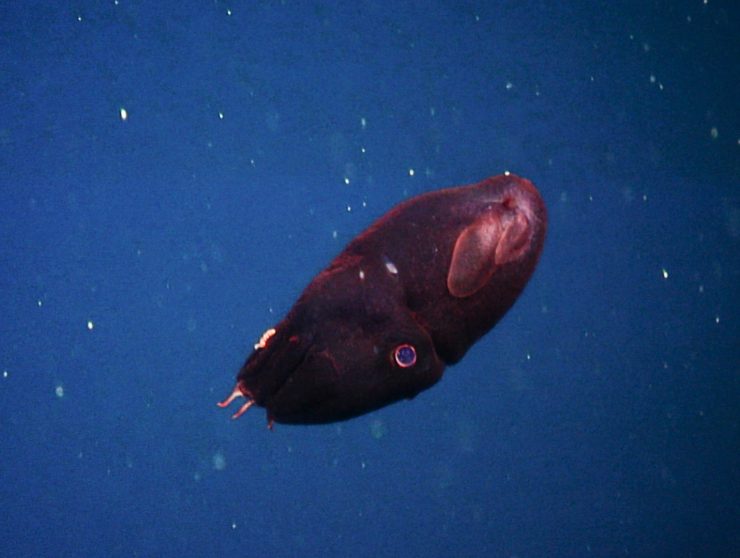 How Did the Vampire Squid Get its Name?

When you think of vampires what comes to mind? Fangs, blood, cloaks, turning into a bat? How about vampire squid? Though at first it may sound like vampire squid suck blood, the squid is no Dracula. So, how did the vampire squid get its name? Read on to learn all about it!

Vampire squid are a small species of cephalopod that typically grow to be about one foot in length. These squid are found in the depths of the ocean, about 2,000 to 3,000 feet deep.

Due to the extreme conditions of the ocean at this depth, vampire squid have made many adaptations in order to survive. Most notably perhaps, is the squid’s ability to breathe in an environment with oxygen levels as low as 3%.

Vampire squid are able to survive in this low oxygen zone due to their low metabolic rate, large gills, and their blood’s ability to distribute oxygen more efficiently.

Why are they called vampire squid?

Though small in size, the vampire squid has a daunting appearance which led to its unique name. While the name “vampire squid” is enough to give you goosebumps, even more interesting is the animal’s scientific name. Known as Vampyroteuthis infernalis, the squid’s name quite frankly translates to “the vampire squid from hell.”

So, what does a squid have to look like to deserve a name like that? When looking at one of these squid, you may be reminded of all things vampire. Specifically, the skin of the vampire squid is distinctive. Similarly to the deep colors often associated with vampires, the squid are dark in color, typically ranging from light red to black.

In addition to its color, vampire squid also have a unique webbing between their arms. The extra skin creates a cloak-like shape at the base of the squid, much like those worn by vampires.

This cloak not only connects the squid to their name, but also helps to protect them. For example, vampire squid tend to wrap themselves in their arms when threatened.

In this situation, the cloak serves two purposes, concealment and defense. The inside of the vampire squid’s cloak is black, allowing it to blend in with the dark water. Additionally, when turned inside out the webbing makes the squid appear larger and reveals innocuous yet intimidating spines.

While the squid’s vampire-esque features may seem frightening, they’re actually not predators. As mentioned above, all of these physical traits help the squid to protect themselves and escape from predators. Specifically, known predators of vampire squid include deepwater fish, whales, and sea lions.

Vampire squid themselves feed on detritus, dead organic material or the bodies of organisms. The squid can sense their food with little hairs on their feeding filaments. Once captured, the detritus is combined with mucus to create balls of food.

Alright, so we know vampire squid aren’t actually vampires, but are they even squid? Surprisingly, no. Vampire squid don’t technically fit the squid or octopus classifications. The most notable difference between vampire squid and other cephalopods are their two retractile filaments used for feeding.

This difference places them in their own order, Vampyromorphida. In fact, they are the only surviving member of this order.

Overall, the vampire squid’s distinctive physical features and adaptations not only give them an interesting name, but also allow them to thrive in an environment in which most living creatures cannot. Vampire squid are certainly eccentric animals that may be hard to forget. The next time you hear the word vampire, your mind may go somewhere different than usual.

How Many Hearts Does a Vampire Squid Have?