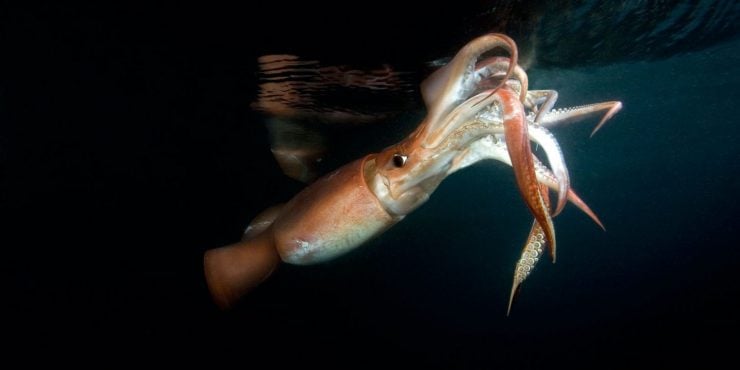 The Humboldt squid is quite the marine specimen. Also known as the “jumbo squid” or “jumbo flying squid”, this sea creature resides in the eastern part of the Pacific Ocean, closer to the United States.

The Humboldt squid is infamous for being a predatory species, which typically spells doom for other marine life, but how does a jumbo squid’s behavior affect humans, if at all?

The Humboldt squid is a member of the Ommastrephidae family, a species of sea squid notorious for being one of the active predator families in the marine ecosystem.

Using a red and white body coloration process during hunting, the Humboldt Squid are also quite adept at retreating from being hunted, as they are able to reach swimming speeds of up to 15 miles per hour!

With an army of suckers and sharp teeth found on their multitude of tentacles to attract prey, Humboldt Squid are dangerous to other marine life as predators, but are also aggressive towards themselves, with reported instances of cannibalism among their species.

Humboldt squids might not appear intimidating on the surface, but are legitimate predators within the Pacific Ocean ecosystem.

Despite this designation, however, scientists are actually quite unsure of the extent to which Humboldt squids are truly dangerous and/or aggressive towards humans.

For example, some scientists stipulate that a Humboldt squid only reacts aggressively or dangerously to a human being in scuba diving gear with a strong light reflection or if a boat has an intense flashing light.

Other marine professionals believe that they are more curious as opposed to being dangerous or aggressive. For instance, when the species is not being hunted, the Humboldt Squid is more likely to co-exist with a human being.

There have been documented cases of active Humboldt Squid aggressiveness towards human beings, particularly with scuba divers.

Humboldt Squid generally prefer to lurk in deeper waters (as deep as 200 to 700 meters, at times), as do human scuba divers on marine expeditions. Therefore, this clash of unfamiliar living specimens provokes the former to behave more aggressively.

Humboldt Squid are more likely to attack objects or species that appear foreign, especially when those objects could pose a potential threat to its shoal (group of traveling squid).

There have been confirmed Humboldt Squid attacks on human beings in the past, especially on deep sea divers. Even after being caught, a Humboldt squid will continue to be aggressive, spraying water and ink on its capturer.

How to Prevent a Humboldt Squid Attack

We’ve established that the Humboldt Squid can be dangerous and aggressive to humans, so what can divers and deep sea fishers do to protect themselves from a potential squid attack?

One great technique is to avoid wearing gear with tons of light reflection. As Humboldt Squid utilize body color change methods to communicate, any distraction can throw them off and cause them to become dangerous and aggressive towards humans.

Another useful tip is to be careful when trying to place any marine equipment under deep ocean water. Humboldt Squids are relentless when it comes to attacking unknown entities, even completely destroying equipment at times.

Lastly, the renowned American explorer and diver Scott Cassell, who has spent much of his career in Pacific Ocean studies, devised specific protective equipment that can be used as armor against a squid attack. This resource might serve as highly effective protection against dangerous and/or aggressive squid.