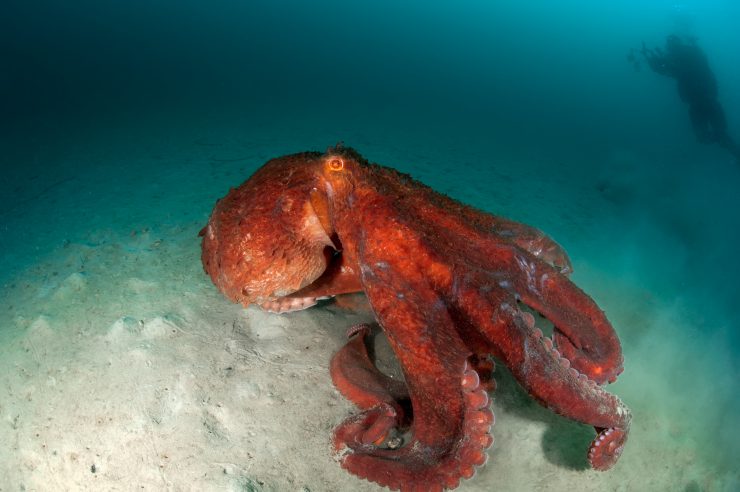 Octopuses are generally regarded as the cute, colorful, and (incredibly) intellectual characters of the ocean. Sporting three hearts, nine brains, and eight arms, octopuses seem equipped to tackle just about any task they decide on.

One character that may come to mind is Hank from the film Finding Dory: a Red Pacific Octopus who, for a majority of the film, sneaks around the aquarium using his camouflage and intellect to brilliantly hide from the staff looking for him.

Yet, octopuses do not just use their smarts and good looks for fun; if threatened or uncomfortable, the Giant Pacific Octopus has been known to defend itself against humans. 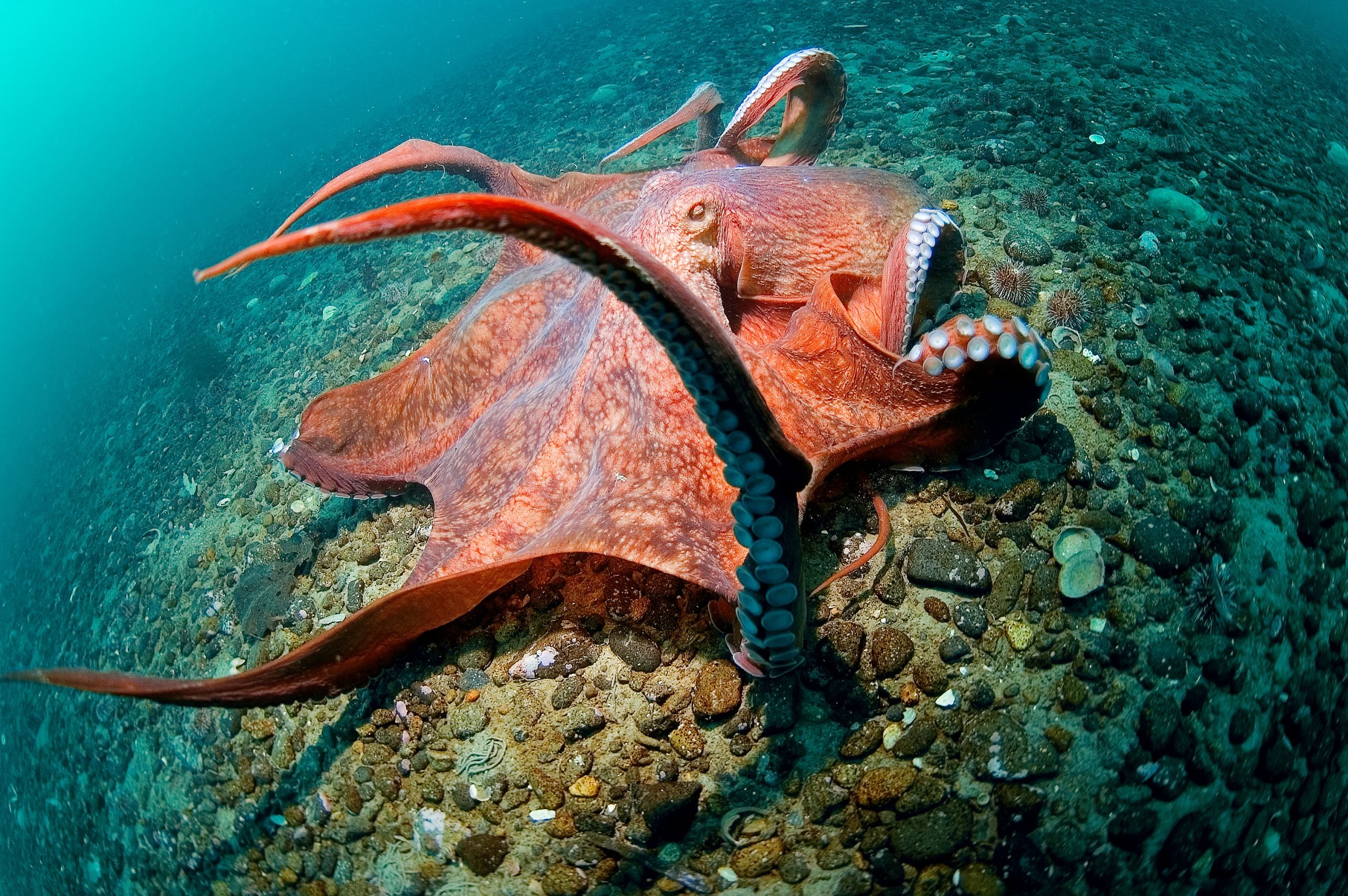 The Giant Pacific Octopus is not generally regarded as a dangerous octopus, unlike its counterpart the Blue-Ringed Octopus. Even so, there are a few reasons why you may not want one to greet you in a non-friendly manner.

The Giant Pacific Octopus is the largest octopus in the world. Although the average length is 16 feet, it has been known to reach up to 30 feet. Additionally, with an average weight of 110lbs (and a highest recorded weight of 600lbs), they could easily attack a human of average size if they chose to.

Lastly, the octopuses beak (located under the octopus by the buccal mask) is not just for show. The bite of the Giant Pacific Octopus will not only hurt, but it will also inject venom into its target (although this venom is not fatal).

Thankfully, the Giant Pacific Octopus is known to be rather shy and usually friendly towards humans, rarely using its dangerous features to inflict harm.

A Russian diver was the target of the most well-known Giant Pacific Octopus attack. As seen in the video, the octopus approaches a group of divers who were swimming close to the ocean floor and shining flashlights. It proceeds to latch itself onto the leg of the diver while attempting to swim back down to the ocean floor. The driver easily breaks away from the octopus, who quickly returns to the floor to camouflage itself.

While this encounter wouldn’t quite earn the term of an attack, it would be safe to say that the octopus may have become frustrated with the divers interrupting it’s nap – after all, a creature with nine brains probably believes itself worthy of uninterrupted sleep.

Other negative encounters of what experts believe were Giant Pacific Octopuses include one with another Russian diver, where the octopus clings first to the diver and then to the camera during the process of filming. Again, the octopus was not outrightly attacking the diver, but did seem to frown upon his personal space being invaded.

In Washington, a woman who placed a baby octopus (believed to be a Giant Pacific) on her face for a photo was bit and injected with venom. She ended up going to the emergency room a few days later and was given antibiotics. While it was no doubt an unpleasant experience, the baby octopus was likely acting out of fear, feeling threatened after being taken out of the water and placed near the woman’s mouth 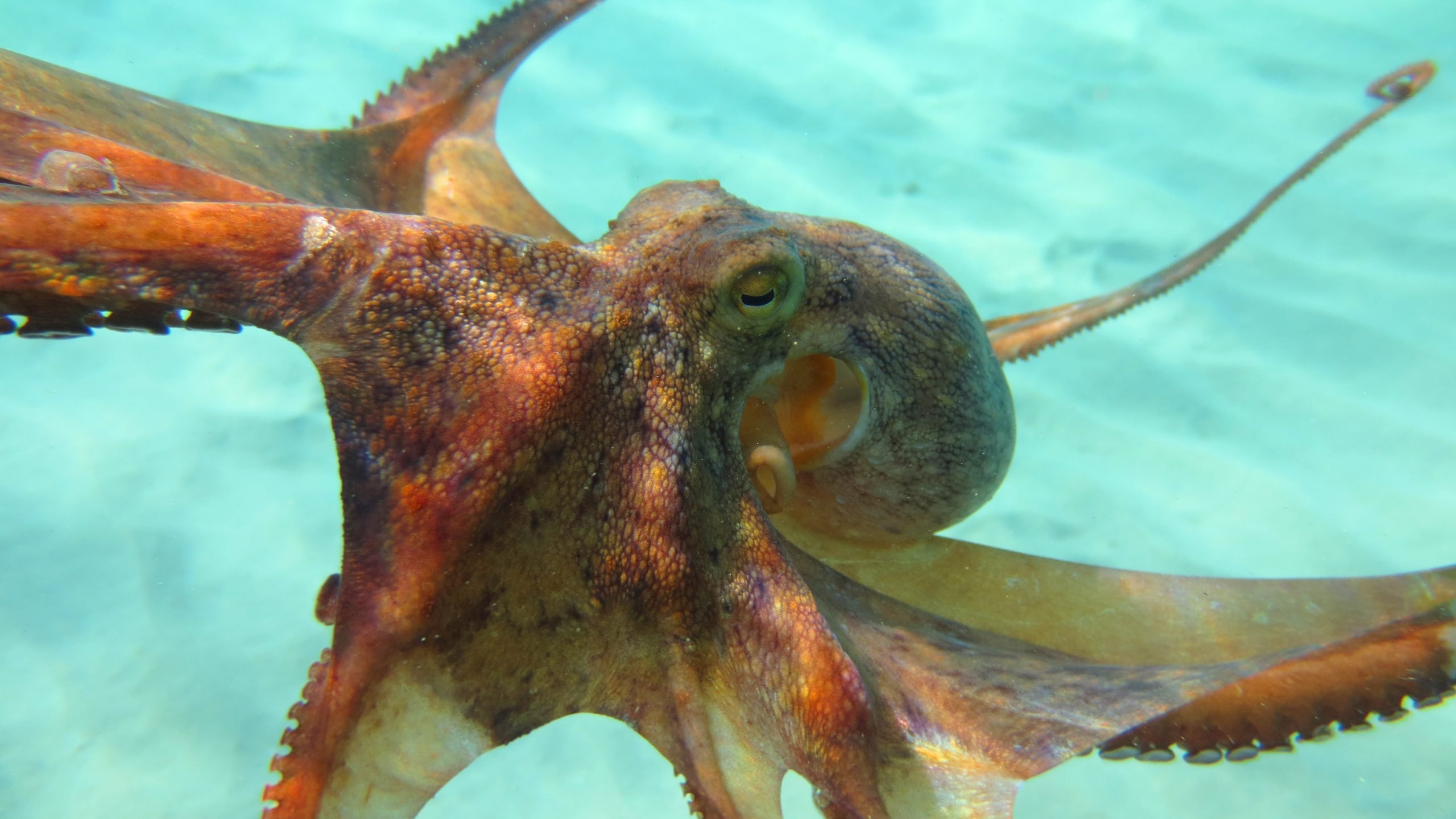 Incidents of the above encounters include the Sea of Japan, Primorsky Krai (Far East Russian), and Tacoma, Washington in the United States. However, the Giant Pacific Octopus lives in the Northern Pacific Ocean and is known to reside in the waters of Japan, California, and Alaska.

Giant Pacific Octopuses are creatures of high intelligence and high amicability. While they have the ability to inflict harm on humans if they wanted to, no attacks thus far have been fatal or even harmful (albeit still scary!).

It is important to note that all of the listed encounters occurred after humans invaded the personal space or territory of the octopus, so unless you are a professional, it is best to admire the Giant Pacific from afar.