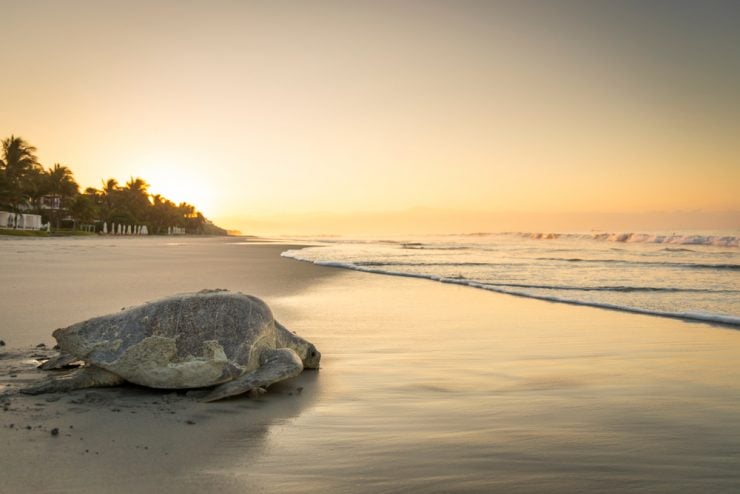 Ranging from 100 pounds to over 1,000 pounds, you can find a great variety of species of sea turtles all over the world. Whether they’re in the ocean or nesting on sandy beaches, these sizable reptiles play a crucial role in our oceans.

While sea turtles are known for their long, streamlined shell, the wide range of sea turtle species features turtles of different sizes, colors, and more.

Throughout oceans around the globe live seven different species of sea turtles. These include:

Sea turtles have been around and remained virtually unchanged for over 110 million years. However, over the past 200 years, changes in the sea turtles’ environment have threatened their continued survival.

So are sea turtles endangered?

Recent human activities have caused significant damages to sea turtle populations and their environment. As a result, nearly every sea turtle species are now considered endangered or threatened.

Despite every species facing significant environmental threats, some sea turtle populations are significantly more critically endangered than others.

According to the International Union for Conservation of Nature (IUCN) Red List of Threatened Species, both Kemp’s Ridley and Hawksbill Turtles are critically endangered, meaning they face a significant threat of extinction globally.

Green Turtles are also facing extinction according to the endangered classification from the IUCN. Leatherback Turtles, Loggerhead Turtles, and Olive Ridley living in the wild are also vulnerable.

The population of sea turtles is in decline, and significant conservation efforts are undertaken to control factors that endanger their health and habitats.

Sea turtles are protected under the United States Endangered Species Act of 1973 and the Florida Marine Turtle Protection Act.

These statutes outline recovery and conservation plans for sea turtle populations and prohibit various human-caused threats to their environment, including possession, sale, or destruction of sea turtles, nests, or their eggs.

Why Are Sea Turtles Endangered?

While sea turtles have been around for millions of years, recent practices along the shoreline have significantly contributed to their declining populations and current status as an endangered and vulnerable group of marine animals.

Some of the most notable factors driving the endangerment of sea turtles include unsafe fishing practices, pollution, coastal development, climate change, and illegal trade and harvesting.

One of the most significant threats to sea turtles is bycatch from fisheries. Incidental capture while fishing is common all over the world.

Nearly 40% of the sea creatures caught in fishing gear are done so unintentionally and are killed or released back into their environment injured.

Sea turtles are easily entangled in trawls or hooked by longlines, which results in critical harm to these turtles worldwide.

Trawls are known to capture 20 pounds of bycatch for every pound of their intended species, causing grave destruction for endangered sea turtle species.

Not only can sea turtles get stuck in nets or on longlines, but any discarded fishing gear can also cause considerable damage.

Turtles can become entangled quickly by this lost gear, causing them to drown or become injured. Plastic is also easily mistaken for food by sea turtles and can cause them to choke or sustain internal injuries.

And this issue might be even more common than you think – one study found that around 52% of sea turtles throughout the world have eaten debris.

Other forms of pollution, such as light pollution and chemical pollution, have also been known to disrupt nesting behaviors, weaken immune systems, and create even more obstacles for sea turtles and hatchlings.

Habitat destruction is a major threat to sea turtles today, which is made worse by continual coastal development and dredging of the seafloor.

Uncontrolled development along the shoreline poses critical threats to nesting female sea turtles on beaches. Alterations and construction on the beach can change the properties of the sand and create barriers to building nesting sites.

Development can lead to more beach-going vehicles and traffic, creating coastal degradation and changes to the sand that disturb sea turtle nests.

This development can also create significant obstacles for young sea turtles as they make their way to the ocean.

Dredging on the seafloor is also responsible for habitat destruction, removing crucial structures, food sources, and habitats that marine life depend on for survival.

As climate change poses more and more of a threat to marine life, sea turtles face several obstacles to their survival.

Rising water levels and the increase in extreme weather and storms can destroy crucial nesting spots along the coastline.

Even the rising temperature of sand on the beach can contribute to sea turtle’s endangerment, causing a shortage of male hatchlings.

Warming ocean temperatures also cause significant damage to coral reefs and other ecosystems that sea turtles depend on for food.

And with more severe storms and changes to the water surface and environment, sea turtles will experience consequential disruptions to their habitats and foraging grounds.

Sea Turtles and their eggs, are considered a source of food and are often illegally harvested for consumption or enrichment.

Along with food, Sea Turtles and their eggs are also often killed and used to create items such as jewelry, leather products, medicine, or other souvenirs.

One of the biggest markets in illegal trade is shell harvesting. Hawksbill Sea Turtles have stunning gold, brown, and orange shells considered highly luxurious and desirable.

These shells are used to make jewelry and other trinkets, causing even more hunting among an already critically endangered sea turtle species.

How Can We Help Sea Turtle Populations?

With all of the human-driven threats to sea turtles today, many conservation groups have stepped up their efforts to prevent further endangerment of these marine creatures.

The WWF has laid out several objectives aimed to address these threats. This group is working to prevent some of the most common hazards caused by humans, like the implementation of more turtle-friendly fishery practices, innovative fishing gear to reduce bycatch, and advocacy of legislation that protects habitats.

Despite the persistent trade and harvesting of sea turtles, there have been steps taken to limit this illegal overharvesting on an international scale.

As large conservation organizations work to protect these species in the long run, there are also plenty of ways you can help sea turtle populations.

Long-term efforts include advocating against the destruction of their habitat, supporting legislation centered around conservation efforts and climate change, and raising awareness of these challenges.

In the short term, even reducing plastic and debris that often ends up in the ocean can have a great positive impact and help prevent pollution that harms sea turtles.

While sea turtles have survived since the dinosaurs walked the earth, recent human activities threaten their continued survival in our oceans.

Climate change, pollution, fishery bycatch, and more have generated highly impactful environmental damages that have pushed nearly every species of sea turtle to the endangered or critically endangered list.

Sea turtles play a crucial role in the health of marine ecosystems, which are put at risk by the decline of sea turtle populations throughout the world. Luckily, many short-term and long-term conservation efforts center around protecting sea turtles.

Whether they present initiatives from an individual, conservation group, or governmental legislation, these recovery plans and actions are crucial in rebuilding the sea turtle population and preventing extinction.

Can Sea Turtles Hide in Their Shells?

Weather vs Climate: What’s The Difference?

How Fast Can Sharks Swim?

What is the Length of the US Coastline?