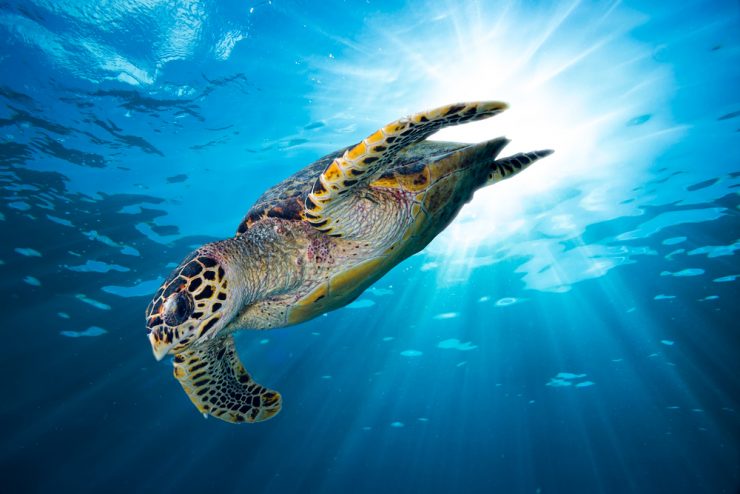 The hawksbill sea turtle, scientifically known as Eretmochelys Imbricata, is an endangered sea turtle species. They are sought after for their beautiful shells and sometimes their meat.

Harvesting hawksbill turtles for their shells cost them their lives and guided the population to near extinction. Fisheries are dedicated to protecting and recovering sea turtle populations worldwide. 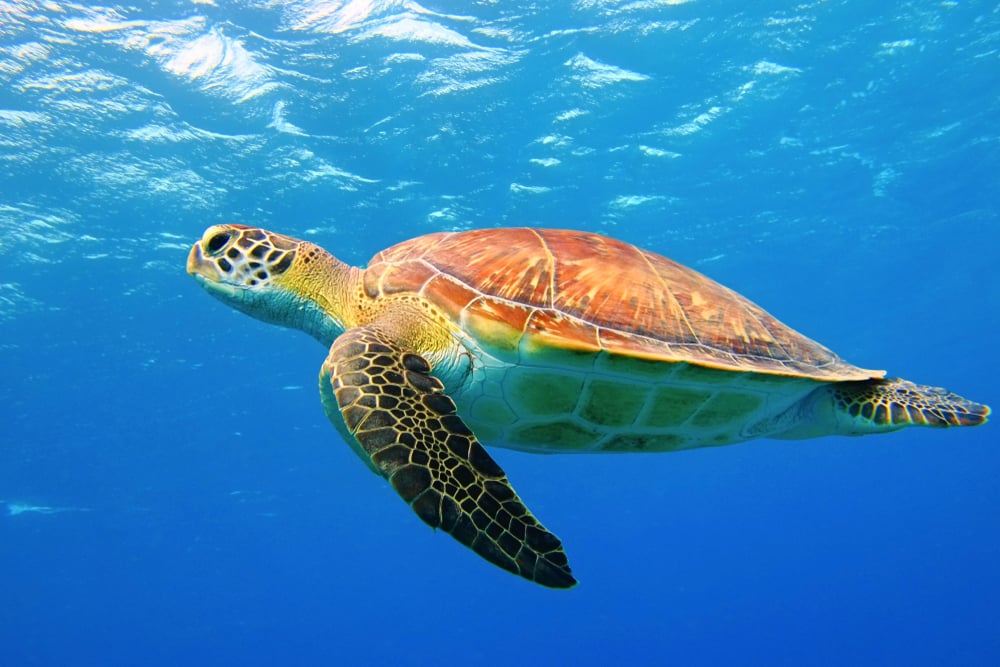 On the other hand, males are much smaller than females, but they have more distinctive colors and have a different shell shape. Baby sea turtles or hatchlings only reach 1-2 inches in length and 24g (0.85 oz) in weight. While young, their upper shell is heart-shaped. As they grow older, it extends lengthwise. 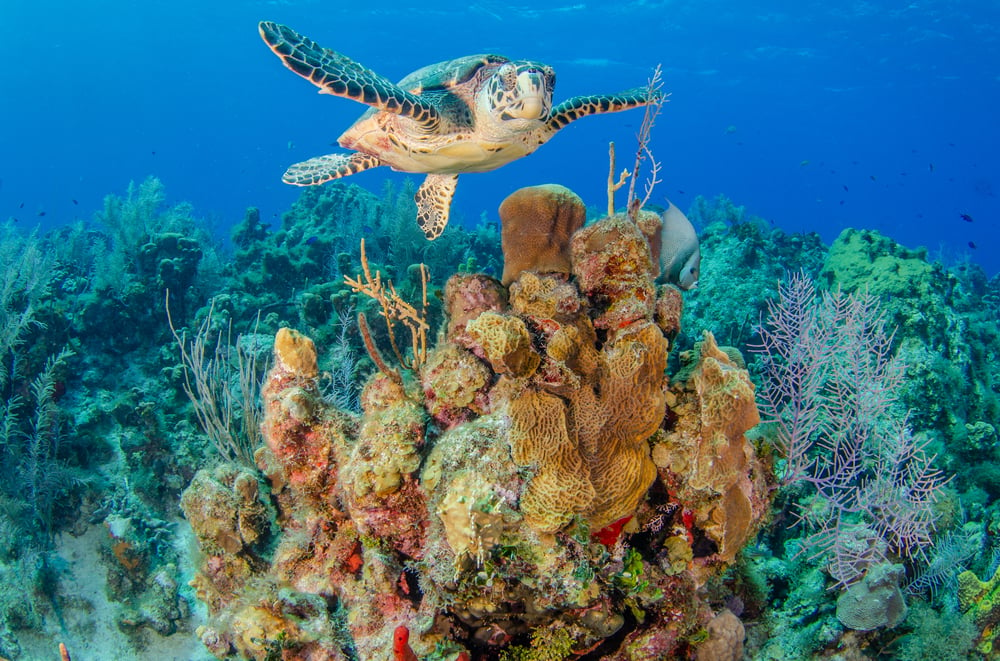 Hawksbill sea turtles are small to medium-sized marine sea turtles. They have a beak-like mouth; their head comes to a point, and the lower jaw is V-shaped. The outer shell layer has an amber colored pattern. They are jagged with overlapped scutes, which are thick, bony plates.

The hawksbill sea turtles’ scutes are golden brown with streaks of orange, red, and black. The bottom layer of the shell is a light yellow color. Every turtle has claws on each of its flippers and two pairs of scales between its eyes. Hatchlings are mostly brown and grow into an amber, yellow color. 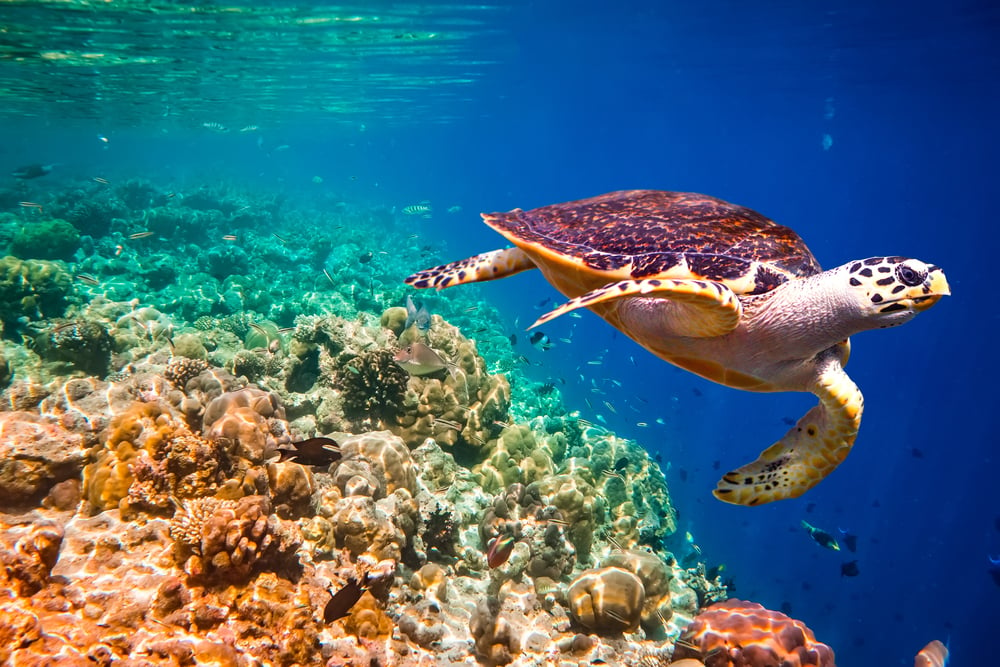 There are no accurately stated lifespans for hawksbill sea turtles, but they can exceed past 100 years of age. They are isolated most of their lives and only meet with other turtles to mate. At the ages of 20-35 years, hawksbill sea turtles reach sexual maturity. Every two to five years, female turtles return to the beach where they were born to nest.

Hawksbill turtles nest high up on the beach under or in the vegetation. They tend to nest at night, where there is no sand. Nesting season depends on their location, but in most places, it begins in April and ends in November. Other sea turtle species return with a small number of turtles to nest in areas along with other adults.

Female hawksbill sea turtles first clear away dry sand with their front flippers, then dig a hole with their rear flippers. They then lay a clutch of eggs. For about two months after that, the eggs fertilize. They lay around three to five nestings per season, with about 130-160 eggs inside. It takes around 60 days for the hawksbill sea turtle eggs to develop.

The hatchlings surface as a group at night and move into the sea together without disturbances of light or people. Hawksbill sea turtles nest on small beaches, except for the Gulf of Mexico and the Caribbean coasts of the Peninsula. Once they reach 14 inches in length, they end up moving into the coral reef habitat. 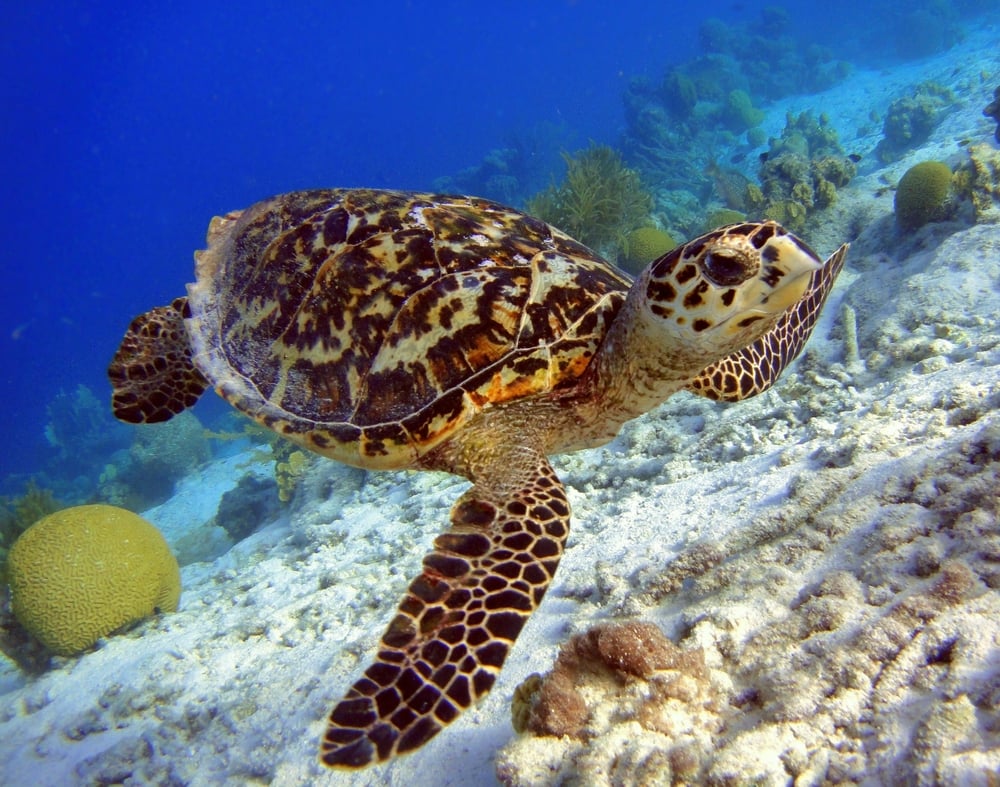 Where do the Hawksbill Sea Turtles live?

Hawksbill sea turtles live in oceans, seas, and bodies of water. These turtle species live in different habitats at different stages in their lives, but they are found in healthy coral reefs, the Eastern Pacific Ocean, and mangrove swamps. They also can be found in rock formations and high energy sandhills. These sea turtles occur in 30°N to 30°S latitude in the Atlantic, Pacific & Indian Ocean. They can also be found in the Caribbean Sea.

Regularly, hawksbill turtles arise in Southern Florida and the Gulf of Mexico, along with the Central American mainland all the way to Brazil. They do not live in the Mediterranean Sea. In the USA Atlantic territories, they are common in Puerto Rico and the US Virgin Islands and on Texas and Southern Florida coasts.

Many sea turtle species cross entire oceans throughout their lifetime, but hawksbill sea turtles stay around their home reefs for most of their adult lives. These sea turtles usually pick the same resting spot every single night. 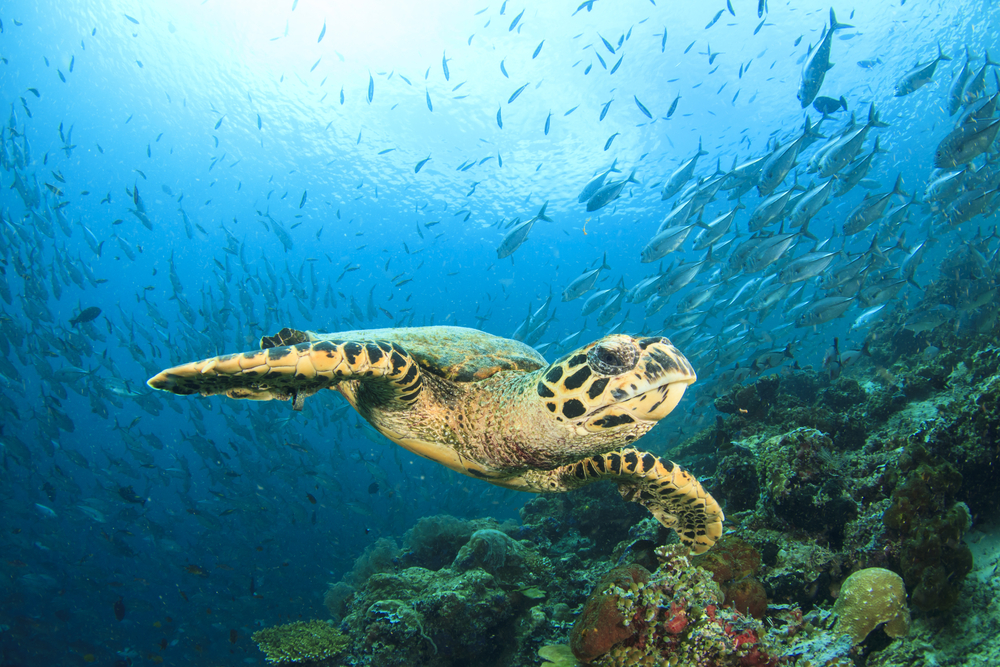 What does the Hawksbill Sea Turtle eat?

Hawksbill turtles are omnivorous, meaning they feed on both plants and other animals. They eat mollusks, sea urchins, small fish, marine algae, crustaceans, and jellyfish.

The shape of their mouth and beak enables them to reach into small holes easily to find food. In Hawaii, they tend to be more opportunistic given the lack of sponges.

Some sponges or small animals that they consume can be toxic to them – luckily, their fat on their body can soak up the toxins without making the turtle unwell. Hawksbill sea turtle’s meat is poisonous to humans. The poisonous meat does not stop humans from harvesting turtles’, though, it is highly discouraged. 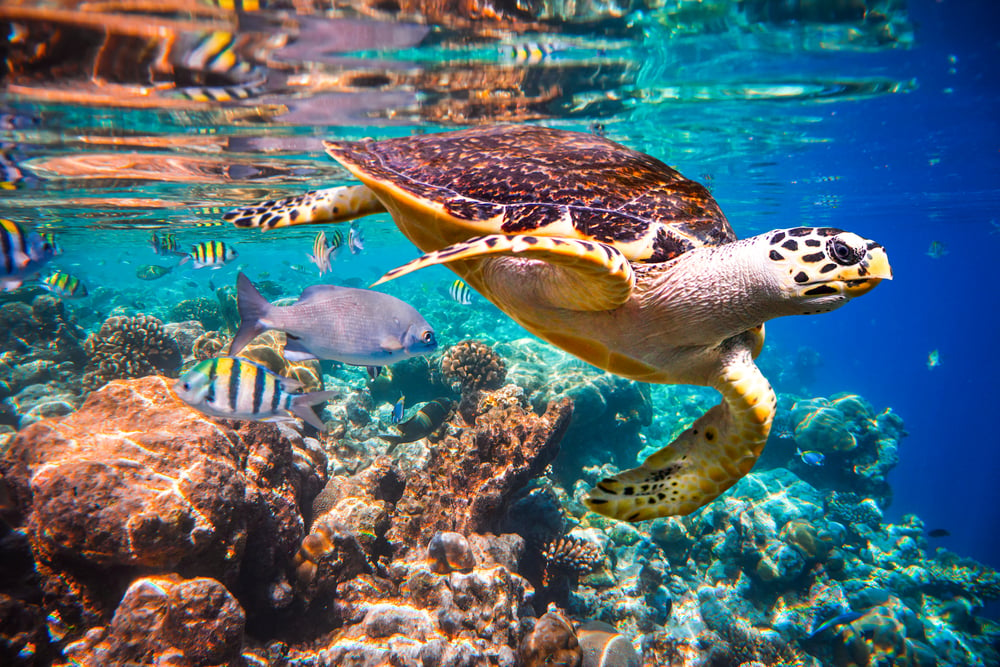 Hawksbill sea turtle’s most significant threat is bycatching, where turtles and other animals get trapped in fishing gear from nearby fisheries. They also are in danger of disastrous fishing practices such as dynamite fishing. Dynamite fishing uses hazardous materials to harm or kill fish for easy capture. These practices are especially harmful to coral reefs and wound animals that are nearby.

People intentionally kill the hawksbill sea turtles to trade them and their eggs for food in the illegal wildlife trade market. Their shells are carved into hair clips, combs, jewelry, and other trinkets in the Caribbean and Southeast Asia. Whole stuffed turtles are sold into the illegal wildlife trade market as well. Between 1950 and 1992, Japan imported 2 million turtles.

A critical threat to climate change is habitat loss for hawksbill sea turtles due to coastal development – it reduces their nesting habitat and food availability. They also reduce the difference in thermal profiles on beaches and lead to artificial lighting, which can react poorly to the nesting success. Global climate change destroys coral reefs by causing more coral diseases, killing the entire coral reef community. 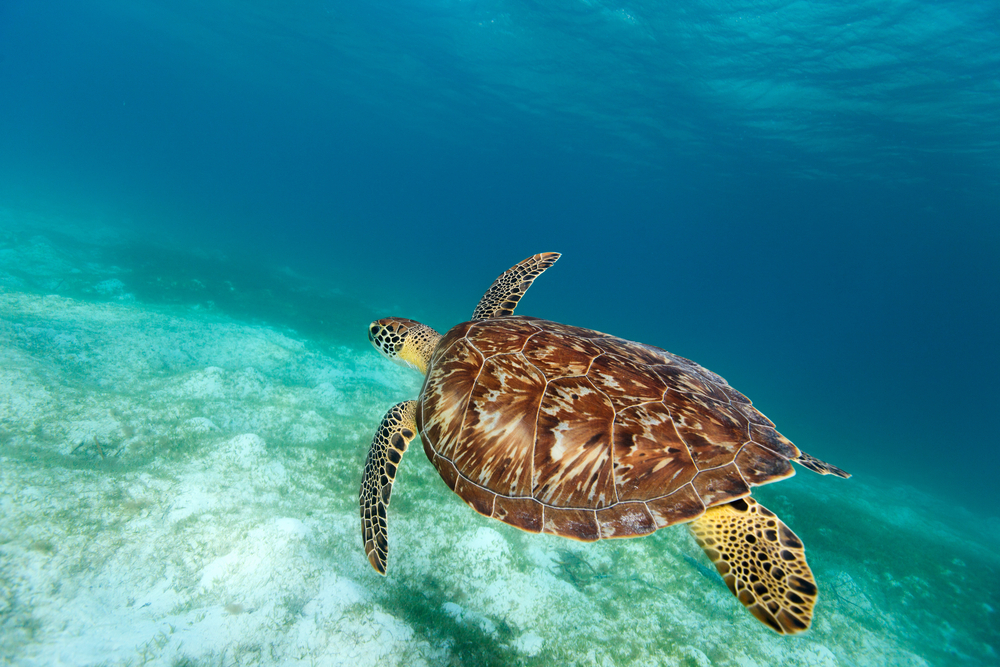 Even though the turtle’s shell protects it from many predators, they still fall in danger to large fish, sharks, crocodiles, octopuses, and humans. Animals such as dogs have the leverage to destroy the hawksbill sea turtles’ nests.

Hawksbill sea turtles may die or get seriously injured if they ingest fishing lining, balloons, plastic pieces, or plastic debris, which they can mistake for food. Coastal development has reduced areas where they can successfully nest. Boats that strike the coral reef are also a big threat to sea turtles, as they are dependent on the coral reef as hiding places and their habitat.

Hawksbill turtles are listed as Endangered sea turtles under the ESA – Endangered Species Act. More than 80% of these marine turtle residencies declined in the last century. To reduce the sea turtles’ extinction, experts are trying to decrease by bycatching, protecting habitats, rescuing, eliminating the harvest of turtles & their eggs, and eliminating turtles’ harassment on nesting beaches. They are the most jeopardized of the seven sea turtle species, with only approximately 8,000 nesting females left in the world. 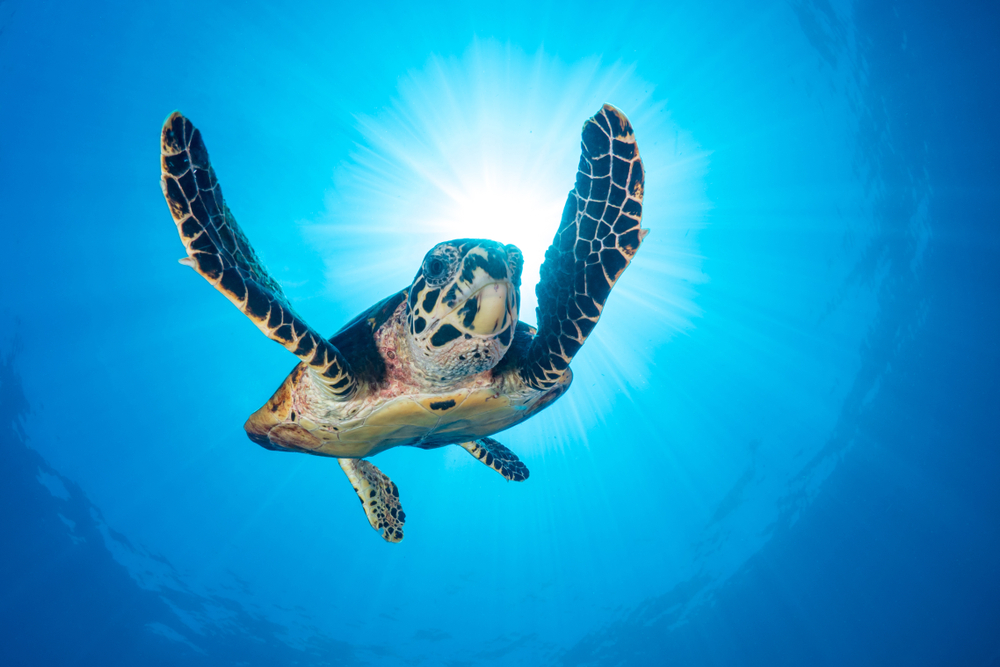 Why Are Hawksbill Turtles Endangered?

How Many Hawksbill Turtles Are Left?

What is Being Done to Protect the Hawksbill Sea Turtle?