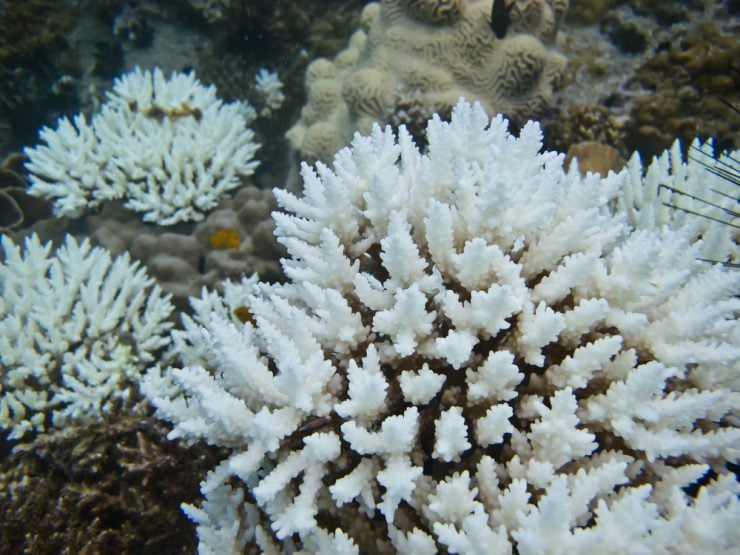 What is coral bleaching? How does it happen? What does it do to the ecosystem? In this article we answer these questions and more as we discuss the marine phenomena of coral bleaching.

What is Coral Bleaching?

Coral reefs worldwide are turning white, becoming more vulnerable to disease, losing their structural integrity, and quite literally dissolving with each passing year. This environmental crisis is known as “coral bleaching.”

Despite its widespread effects, many still wonder, “What is coral bleaching?” See the overview below to learn more.

Climate change has changed countless aspects of the world’s ecosystems, both land and water, dramatically. Corals in oceans worldwide have been affected as well, most apparent in the effects of the phenomenon known as “coral bleaching.”

What is coral bleaching? It is one of the most visible consequences of corals living under the stress of climate change, primarily due to changes in:

These environmental fluctuations force the coral to expel the algae that live in the corals’ tissues, damaging their ability to persist in the organisms’ symbiotic relationship. Without this algae, the corals are significantly less likely to survive, causing them to turn white and ultimately die.

The Importance of Coral’s Symbiotic Algae

The algae (scientifically known as “zooxanthellae“) are a little-known yet critical aspect of a coral’s survival. They are tiny photosynthetic organisms that reside within the coral’s tissues, as mentioned above – although they’re not the only ones to benefit from this arrangement.

The algae and coral have a “mutualistic” or “symbiotic” relationship, meaning they both benefit from living in one another’s company. For the algae, the advantage of residing alongside coral is protection from the environment. Plus, they get access to crucial chemical compounds required for photosynthesis.

On the other hand, the coral benefit from partnering up with the zooxanthellae through the algae’s production of oxygen and waste removal. This boost’s the coral’s health, drastically improving its chances of survival. Still, that’s not all. The algae also provide the coral with the compounds they produce by photosynthesis:

The coral then uses all these products to synthesize more chemicals that are essential to sustaining life, including proteins, fats, carbs, and, most importantly, calcium carbonate. (Calcium carbonate is the very material that composes the coral’s “skeleton.”)

Together, the two cycle nutrients through the ocean’s waters with remarkable efficiency. They can uptake up to 90% of the algae’s organic material into the coral’s tissue, ultimately creating the thriving reefs humans know and love today.

When the coral loses their microscopic life partners, they lose access to all these nutritional advantages, plummeting their health and driving them to perish. The “bleaching” effect occurs because the algae are often responsible for corals’ vibrant colors, too. In their absence, the coral is entirely devoid of any hue apart from white.

What are the Main Causes of Coral Bleaching?

Coral bleaching is caused by numerous environmental factors, a handful of which are noted above. Researchers say that people should interpret the causes of coral bleaching according to the following framework, made up of three distinct elements:

The third element is the least understood of them all. Yet, scientists suspect that the zooxanthellae’s genetic makeup could indicate how the two symbiotes might respond to the effects of climate change.

Despite all the uncertainty, researchers know that a central factor in the causative forces behind coral bleaching is the coral’s physiological response to oxidative stress. Oxidative stress is when lipids, proteins, and DNA are all damaged due to the production and buildup of “reduced oxygen intermediates,” including:

All these issues are exacerbated by extensive, unprecedented changes in the surrounding environment. Research shows that ocean temperatures have increased by nearly 1°C (33.8°F) in the past century, rapidly increasing by roughly 1-2°C each century.

As the corals are pushed past their temperature threshold, their physiology grows increasingly imbalanced, damaging their ability to sustain a symbiotic relationship with zooxanthellae and ultimately costing their lives.

When Did Coral Bleaching Become a Problem?

Coral bleaching has been a major problem for several decades. On the one hand, it’s inaccurate to believe that coral bleaching began specifically due to climate change. This is because bleaching is a natural stress response and would occur with fluctuating sea conditions, albeit at a much smaller scale and significantly less frequently.

On the other hand, as a detriment to the world’s ocean ecosystems, coral bleaching became a problem approximately 40 years ago. This was when scientists began to notice the numerous mass bleaching events that occurred the world over.

For example, in 2005, the United States lost half of its Caribbean coral reefs in a single year because of bleaching. Experts compared that year’s thermal stress to the previous 20 years using satellite data and confirmed 2005’s environment alone was more extreme than the past two decades combined.

Interestingly, though, researchers have also learned that warm temperatures aren’t the only trigger for mass bleaching events. A subsequent mass coral loss in January of 2010 illustrated just how deadly cold water could be, too.

The ocean’s temperatures dropped by slightly more than 12°F (-11°C), leading some portions of the Florida Keys’ corals to die off. The loss was not as extensive as the 2005 event. Still, it served as a grim reminder that there is no single cause of coral bleaching.

Sadly, the problem worsens with each passing decade. The global proportions of coral affected by mass bleaching events each year rose from 8% in the 1980s to a staggering 31% in 2016.

How Often Does Coral Bleaching Occur?

Coral bleaching is an unfortunately common occurrence in today’s world. As noted above, the extent of coral reef ecosystems affected by the phenomenon is rapidly rising every year. Yet, this doesn’t quite illustrate how often this problem happens.

Mass coral bleaching is accelerating worldwide. In the 1980s, when it first emerged as a globally troubling environmental concern, it was happening at an average frequency of once per 25-30 years. Now, mass bleaching events occur once every six years, and scientists see no signs of it slowing down.

Coral bleaching is now occurring at a rate that the reefs cannot naturally keep up with. Consequently, the reefs are crossing the “mortality level” threshold before they can recover.

In ideal circumstances, a coral reef would have 10-15 years to recover from the effects of bleaching. During this time, their algal communities would grow to suitable populations once again, providing the corals with adequate nutrition.

Unfortunately, with the current rate of one mass bleaching event every six years and increasing ocean acidification (creating the highest acidity levels in 400,000 years), the reefs won’t recover on their own. Acidification severely lowers the water’s capacity for holding calcium carbonate, leaving only 15% of coral reefs with enough material for regrowth.

Can Coral Bleaching be Reversed?

Technically, corals can recover from bleaching. If the ocean’s conditions return to normal, the algae can regrow and replenish the coral once again, allowing the reef to grow and return to its previous state. As mentioned above, the algae would need 10-15 years of suitable conditions to heal themselves. Unfortunately, in today’s climate, that seems to be difficult to attain.

One primary thing humans can do to stop or slow the mass bleaching events is mitigate the effects of climate change. Namely, reducing greenhouse gases (GHGs) can significantly reduce the loss of corals worldwide. This will also help combat ocean acidification, which actively prevents the reefs from growing.

If people – including corporations that are responsible for the vast majority of GHG emissions – do their part to reduce their carbon footprint, the world just might secure a chance to see the majestic reefs flourish once again.

So, what is coral bleaching? It’s when a coral expels its symbiotic algae, known as zooxanthellae, due to severely compromised ocean environments. Since the algae are a crucial part of the coral’s survival, they eventually die off if not given a chance to recover in suitable conditions over 10-15 years.

The rate of mass bleaching events is increasing rapidly, now at about one per six years. The outlook is grim. However, with consistent actions to mitigate climate change, namely in reducing greenhouse gas emissions, the world’s reefs may just persist for years to come.