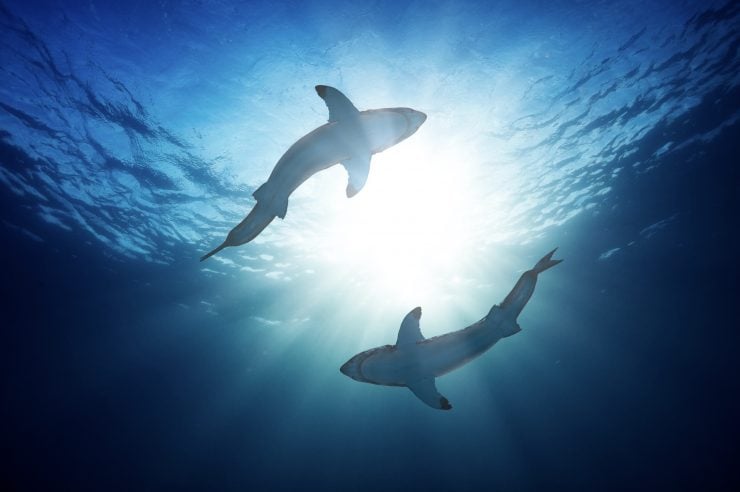 The Effects of Climate Change on Sharks

Sharks have been around for over 450 million years, and have endured numerous evolutionary changes in response to natural changes in climate.

However, todays’ climate (and oceans) are changing at a rate that sharks do not have experience evolving at.

Climate Change: Evolving to the Periods

As the world has aged, it has gone through periods of natural climate change. The earth has undergone warm periods (interglacials) and cold periods (ice ages) throughout its history.

Life on earth has had to evolve in order to accommodate these periods, which occur roughly every 100,000 years.

This slow change in climate has allowed for life to evolve slowly, steadily, and efficiently for each period.

However, because of global warming – a phenomenon prompted by humankind causing the release of excess carbon dioxide into the environment – the natural change in climate is accelerating.

The earth is naturally approaching a warm period, but global warming is accelerating the rate of climate change at a rate that a majority of life will have difficulty adapting to – including sharks.

The History of Sharks and Climate Change

Sharks have been on earth for over 450 million years, and have evolved to live in every extreme period.

While past Sharks have lived in oceans of higher than average temperatures and acidities than present oceans, todays’ Sharks have not.

Additionally, todays’ sharks do not have the luxury of evolving to new, harsh environments over many generations: rather, the rapid change in oceanic temperature and acidity is proving to be more than the creatures can handle.

Sharks today face many dangers that are consequential of a more rapid change to a warm period sparked by global warming. So what are these dangers, and what do they mean for sharks?

When we think of Sharks, we tend to think of exceptionally large sharks that have a goal of munching on swimming humans. In other words, Jaws!

This is not the case for sharks at all for two reasons. First, sharks never intentionally attack humans without mistaking them for being a part of their food source: in other words, sharks only viciously attack humans if they believe them to be, say, a seal.

Secondly, not all sharks are great white sharks! Many sharks are much smaller and tend to live in more sheltered environments, such as coral reefs.

Global warming poses a great threat to sharks that reside in coral reefs ecosystems. As the ocean becomes warmer, more dangerous, and more acidic (due to more carbon dioxide being absorbed by the water) coral reefs – and the ecosystems they support – find themselves at risk.

If coral reefs begin to die off due to increasing temperatures or pH change, or continue to be destroyed by storms that are becoming more common in the age of climate change, the sharks that reside in these reefs will find themselves in danger and, possibly, endangered.

Most people love when the ocean is warm – after all, it makes for a great swimming experience! Unfortunately, many sharks do not share in our enthusiasm.

As waters warm, sharks are beginning to change their migration patterns and routes in order to stay in the waters most comfortable for them.

One shark species that has already changed their migratory ways is the Bull Shark. Bull Sharks are beginning to appear where they never have before, and scientists believe it is because of warming waters.

While this seems simply interesting, it actually has a huge impact on oceanic ecosystems. As Bull Sharks are towards the top of the food-chain, entering new areas could cause the disruption of a perfectly functioning ecosystem.

The bull shark could become a threat to nursery areas, or scare competing predators out of the ecosystem all together, endangering all involved.

Studies completed on the impact climate change is having on sharks have also brought up interesting developmental correlations.

The growth and reproduction timeline seem to be slower for sharks who have been exposed to warmer waters.

One study found that increasing water temperatures and carbon dioxide levels are affecting the brain development of sharks, which could change behavior and decision-making capabilities, as well as result in smaller brains.

Sharks are famous for being able to survive – and evolve to match the times – for the past 450 million years. Todays’ sharks, however, face a challenge that no other shark has faced before.

As climate change is accelerating as a result of global warming, sharks are not being allocated the time they need in order to properly evolve to warmer and more acidic waters as well as destroyed ecosystems.

As a result, sharks are changing, but not in a healthy way for them or the other inhabitants of the ocean.

Migration routes are changing, behavior and development is affected, and ecosystems are having a hard time adjusting as a result.

It is imperative to remember that as sharks have played a leading role in the oceanic ecosystem for millions of years, if the sharks begin to struggle as a result of climate change, we can confidently predict that every other oceanic creature will as well.

What Is The Law Of The Sea Treaty?

Where is the Wettest Place on Earth?