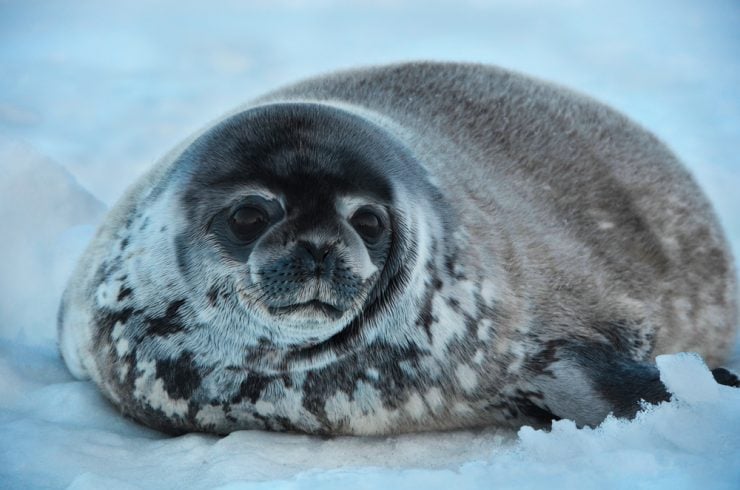 The ringed seal, scientifically known as Phoca hispida, earns its name from the distinctive dark spots encircled by light grey rings which spatter its coat. There are five subspecies of ringed seal, and all call the Arctic home, but you can find them in the Baltic and Bering Seas too.

With a small head and feline-looking snout, ringed seals are often associated with their Arctic homes. They’re especially striking when they’re first born. Bright white and fluffy seal pups blend into their snowy habitats until they lose their natal coat, between four and six weeks old. After that, they earn the pelt they’re named for.

Ringed seals are the smallest seal species, and when born, weigh under ten pounds. Depending on the subspecies and where they are in the world, adult ringed seals can grow to between 71 and 391 pounds. Typically, though, they’ll grow to be 110-150 pounds and to about 5 feet in length.

As mentioned, ringed seals get their name thanks to their appearance. As adults, they have dark grey pelts covered in lighter grey rings. The effect is a mottled grey coloring that easily blends in with ever-changing sea conditions.

Sometimes scientists refer to ringed seals as being earless. That doesn’t mean they can’t hear. It means they don’t have an external ear or pinna; their inner ears work just fine!

Specific to ringed seals as well are sharp claws on their front flippers. They use these claws to carve breathing holes in the ice. It’s this trait that allows them to live in places where other creatures, even ice-loving ones, can’t survive.

During late winter and early spring, ringed seals carve out lairs in snowdrifts. As temperatures warm, the ringed seals shift from hiding in their snowy caverns to basking directly outside them.

Then, they undergo their annual spring molt. The spring molt is one of the few times in the ringed seal life cycle where you’ll see ringed seals in small groups. They lounge around together on drifting ice floes as they lose their winter coats.

As the calendar turns to breeding season in April and May, males become incredibly aggressive, and their faces turn black. They also tend to emit a gasoline-like scent.

Sexually mature females will lure in a roaming male as soon as they’ve weaned last year’s offspring. The adult seals will spend several days together before they decide to mate, and after they do, the male leaves.

When it’s time for the female seal to give birth, she’ll do so in the ice lair she carves in late winter. Typically, females give birth to one pup after a nine-month gestation period, but embryo implantation is delayed. Though ringed seals breed in April or May, the embryo often does not implant until July. So, it can appear as though they’re pregnant for eleven months, not nine.

Once the pup is born, the mother will nurse it for a month or two. That allows the seal pup to build up a thick layer of blubber. After that, ringed seals live out their 25-30 year lifespan mostly alone. They’re solitary creatures who prefer to be on their own.

Ringed seals require ice and cold water. Usually, you’ll find them in saltwater, but there are two subspecies (P. h. saimensis and ladogensis) that thrive in freshwater conditions. It seems that as long as the water is, in large part, frozen, ringed seals will happily call it home.

Floe Ice or Drift Ice is vital to the ringed seal’s habitat. Drift ice refers to ice that is not attached to any fixed land. It flows through the ocean, guided by currents that often push ice pieces together to form ice packs. Ringed seals call these ice packs home.

Where Do Ringed Seals Live?

You can find ringed seals in most places ice packs form, including all of the Arctic Ocean. They’re in the Northern Pacific ocean, too, particularly along the south Bering Sea. In years with extensive ice coverage, you’ll find them as far south as Bristol Bay, Alaska, and the Sea of Okhotsk in Russia.

Ringed seals eat all sorts of small marine life. They’re opportunistic, so what they decide to dine on has more to do with how convenient it is than what, exactly it is. If it’s an available fish or crustacean, reasonably close to shore, and not too deep in the water, a ringed seal will probably enjoy it for dinner.

That’s not to say that ringed seals are lazy hunters. They’re willing to dive up to 150 meters to reach their prey and can hold their breath for up to 45 minutes underwater.

What Do Ringed Seals Eat?

In any given geographic location, ringed seals will typically have 10-15 types of prey that they keep an eye out for. These include crustaceans, herring, shrimp, and various invertebrates.

Regardless of where a ringed seal population is in the world, they all seem to have a deep love for various species of cod, especially Arctic and Saffron Cod. Ringed seals have a particularly cod-heavy diet from autumn to early spring.

In warmer months, crustaceans become the dominant dietary option. Some observe that younger males seem particularly attracted to crustaceans as a food source.

From polar bears to fishing gear, there are many things to watch out for if you’re a ringed seal trying to survive.

Humans are also responsible for toxic substances in seal habitats. Offshore oil exploration, for example, could pose a severe threat to ringed seals if any of it accidentally or illegally leaks into Arctic waters.

Though they’re listed as of “least concern” due to a healthy population size now, the threat of climate change and rapidly melting arctic ice could be detrimental to the ringed seal population.

Walruses and orcas are known for hunting adult ringed seals as well. In contrast, arctic foxes pose a particular threat to ringed seal pups. They use their extra-sensitive noses to sniff out seal lairs, then burrow into them from the other side, stealing seal pups as their prize.

As marine mammals, ringed seals fall under the Marine Mammal Protection Act (MMPA), which protects them from harassment, hunting, capturing, or killing in U.S. waters or by a U.S. citizen.

The IUCN (International Union for Conservation of Nature) lists ringed seals as “of least concern.” There’s a large wild population of ringed seals, and they are not currently endangered.