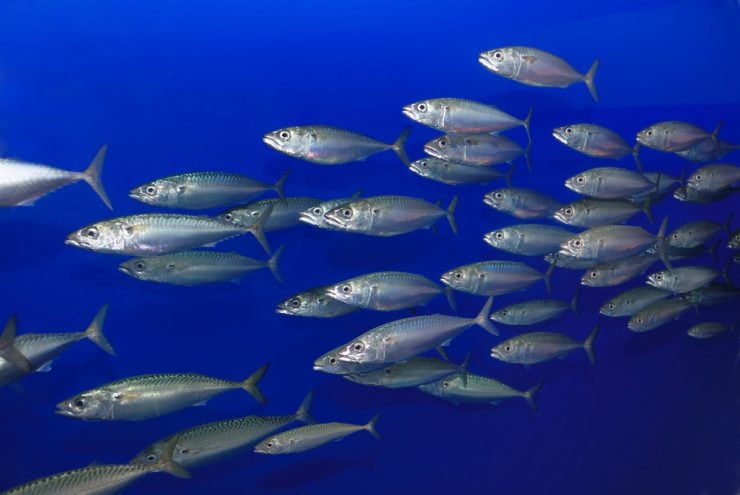 Pacific sardines play a vital role in the marine ecosystem. They’re towards the bottom of the food chain, providing food for larger fish, pelagic invertebrates, and humans.

In this guide, we’ll introduce you to the fascinating world of Pacific sardines, their habitat, and what threatens their ecosystem.

One of the most notable features of the Pacific sardine is that they have a compressed head and a protruding lower jaw.

Nevertheless, if you were to open a Pacific sardine’s mouth, you’d see that it doesn’t have any teeth. That’s because they filter food from the water, consuming particles that don’t require chewing.

Pacific sardines also have a forked tail, giving them a v-like appearance.

The weight of a Pacific sardine varies greatly depending on its size. Small sardines weigh as little as four ounces, whereas larger ones can weigh up to one pound.

Pacific sardines grow up to 16 inches long. Female sardines grow faster than males, and they can reach adult size in as little as one year.

Pacific sardines have a complex color system. Their black has a blue-green iridescent hue, and their sides are silvery white. Furthermore, they have black specs around their middle, usually in sets of one to three.

These fish have large black pupils with a silver iris.

Because of their low status on the food chain, Pacific sardines have a fast-paced life cycle. They spawn throughout the year, with a female Pacific sardine releasing as many as 200,000 eggs each season.

The ideal spawning habitat for Pacific sardines is anywhere from the water’s surface down to 165 feet. Three days after the spawning period, thousands of baby Pacific sardines hatch. They then make their way towards the shore, where they gather in large schools with like-sized sardines.

That said, as fish that feed birds and aquatic creatures, many Pacific sardines don’t survive to adulthood. However, those that do can live as long as 13 years.

Pacific sardines live in large schools near the surface of the ocean. They thrive in upwelling areas, which occurs when the wind brings denser water from deep in the sea to the surface. As a result, they have access to nutrient-rich seawater, where they can feed.

Sardines have a decent tolerance for cooler water, and they enjoy living in parts of the ocean that have a lot of currents.

Where Does the Pacific Sardine Live?

The Pacific sardine calls the Pacific and Indian Oceans home. They have large concentrations and subspecies in areas such as:

Pacific sardines are filter feeders, meaning they consume tiny particles suspended in the water. For this reason, evolution gave them large eyes for excellent eyesight.

What Does the Pacific Sardine Eat?

The primary food source for Pacific sardines is plankton. These are microscopic plants and animals that drift in the water. They come in the form of eggs, protozoans, and crustaceans that are indistinguishable to the human eye.

Zooplankton is a subcategory within plankton that Pacific sardines eat. The term refers to any tiny animals, larvae, or bigger animals at the beginning of their life cycle.

Pacific sardines have many predators and climatic problems that threaten them. Here, we’ll explore some of the most pressing issues facing sardines.

Pacific sardines play an important role for humans. Unfortunately, that’s why they suffer from a declining population. During the Great Depression days, people consumed Pacific sardines in great quantities, both as food and for oil. They also ground up the sardines into fish meal for chicken feed.

Additionally, the high fish oil concentration in Pacific sardines makes them an excellent supplement for homeowners. You can find sardine oil in paint, linoleum, and varnish.

Nowadays, many countries have restrictions on how many sardines fishers can capture, for people continue relying on them as a food source, among their other non-food uses.

For example, on the west coast of the United States, fishers must have a special permit for catching any pelagic finfish, which includes sardines. However, they don’t currently allow commercial Pacific sardine fisheries to operate.

As a silver lining, the act of catching sardines has a low impact on the environment. Since these are surface-dwelling fish, fishers can capture them using shallow nets so that they don’t disturb the ocean floor.

In a study performed by the Indonesia Marine Fellows Program, the ocean’s temperature “significantly affected” the ability of sardines to produce.

That said, since Pacific sardines live in both the cold northern Pacific Ocean and relatively warmer waters of the Indian Ocean, they have some flexibility with their ability to adapt to changing temperatures.

In fact, research shows that groups of sardines that had acclimated to two different temperature groups could withstand high temperatures—the group adapted to a higher temperature could tolerate a .8 °C greater temperature than the other group. Nevertheless, global warming is increasing seawater temperatures at an alarming rate.

For this reason, scientists fear that the Pacific sardine may not be able to keep up with acclimating to temperature change. If this occurs, it’ll impact their reproductive and eating habits, and the population will die off.

There is no shortage of creatures waiting to eat Pacific sardines; they’re food for both marine and land animals. Some common predators include:

Pacific sardines school in large groups and implement synchronized swimming techniques to ward off predators. Nevertheless, between the sardines’ great quantity and savvy tricks that its predators developed, the Pacific sardine can fall victim to all of these predators.

Of the larger fish, whale sharks, mackerels, and tarpon commonly prey on the Pacific sardine.

Many of the toxins infecting the Pacific sardine’s habitat include heavy metals, hydrocarbons, and pesticides. Some of this issue dates back as early as the 1970s, when the U.S. government allowed industries to release chemical wastewater into the ocean.

Despite the many threats it faces, the Pacific sardine isn’t currently in danger of extinction. Much of this is thanks to stronger regulations regarding how many Pacific sardines people can take.

Additionally, because sardines are quick to grow and reproduce, it doesn’t take them as long to replenish their population during periods of decline compared to other species.

Fun Facts About the Pacific Sardine

If you’ve never given much thought to the Pacific sardine before now, the facts below might help you have more appreciation for it.

Sardines deserve more respect than many people give them, and it’s critical that we promote safe fishing practices to protect them. The good news is that sardines have a rapid life cycle. Therefore, with collaboration from countries where Pacific sardines dwell, these fish can continue to rebuild their population.