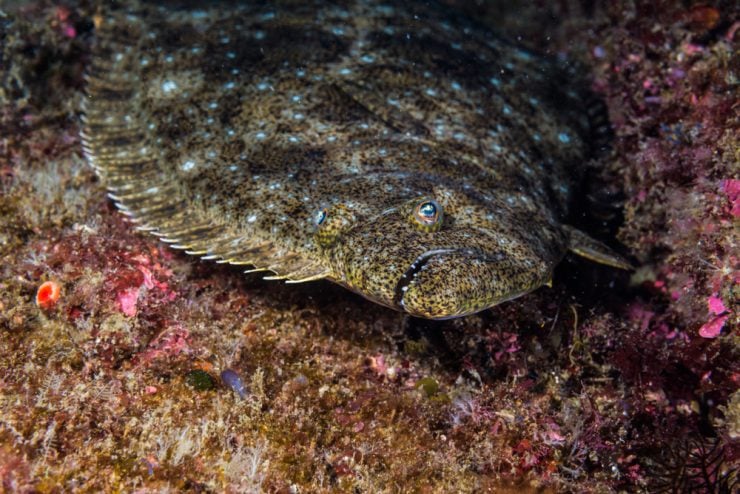 The Pacific halibut is a flatfish in the flounder family. Since it’s a popular fish for sport and eating, there are regulations to decrease the risk of a declining population.

In this guide, we’ll share details about the Pacific halibut, including its habitat and life cycle.

Pacific halibuts are flatfish that have a wide, diamond-shaped body. It also has a crescent-shaped tail, which is a difference that makes it stand out from the flatfish family.

These fish have tiny scales that give them a smooth, glossy texture. Both eyes on the Pacific halibut sit close together on top of its head.

The Pacific halibut is a massive fish, growing up to eight feet long and five feet wide. It can weigh close to 500 pounds.

In fact, the Pacific Halibut is the biggest fish in the flatfish family anywhere in the world.

The Pacific halibut has two colors—a dark top with tiny, lighter speckles and a white underside. However, the exact color of the fish changes to camouflage with the ocean floor. The halibut’s eyes sit on the dark side of its body.

Nature crafted the Pacific halibut to have a white underside so that when it’s swimming, any fish roaming around beneath it will look up and think that they’re looking at the sky. As a result, it’s easier for Pacific halibuts to catch prey. It also helps them avoid predators.

Pacific halibuts spawn in December, January, and February. They choose deep waters to do their spawning, mainly off the edge of the continental shelf in water ranging from 600 – 1,500 feet deep.

Because of their long lifespan, Pacific halibuts aren’t in a rush to reach sexual maturity—it takes males 7 – 8 years and females a stunning 8 – 12 years.

However, once the female reaches spawning age, she can produce up to 4 million eggs, with her egg production increasing as she ages.

It takes fertilized Pacific halibut eggs about two weeks to hatch. From there, its larvae float around in the water for approximately six months. During this time, they may float on currents many hundreds of miles in the North Pacific waters.

Pacific halibut larvae aren’t born with eyes evenly placed side by side on top of their heads. Instead, during these six months when they’re floating around in the current, their left eye moves in line with their right eye.

By the time a Pacific halibut reaches six months of age, it’s an adult. At that point, it averages around 1.4 inches in length and lives in shallow water. It then begins testing out life as a bottom dweller.

These young adult fish will end up spending their first five to seven years in these shallow nursery grounds. However, they love to migrate, so they often move in a clockwise fashion in northern Pacific waters.

As adults, Pacific halibut don’t move around quite as much. But when they do, they also move clockwise. Mating season is an exception to this rule of little adult movement, as sexually mature Pacific halibut migrate to deeper waters where their eggs and sperm have access to a larger fertility pool.

Female halibuts grow at a faster rate than males. However, for both males and females, the growth rate greatly depends on the quality of their habitat. Pacific halibut can live long lives, with the oldest known halibut being 55 years old and weighing 459 pounds.

Pacific halibuts thrive in water that ranges from around 38 to 46 degrees Fahrenheit. They’re demersal vertebrates, meaning they’re a groundfish that lives on the seafloor.

They tend to congregate around the continental shelf, as they enjoy shallower water where they can hide in mud or sand while having access to many food options.

Where Does the Pacific Halibut Live?

The Pacific halibut is a cold-water fish that lives along the continental shelf of the northern Pacific Ocean. It occurs in the largest concentrations around the Bering Sea and the Gulf of Alaska.

That said, smaller groups of halibut live in more southern Pacific regions of the United States, including Washington, Oregon, and California.

Halibuts have to consume a lot of food to maintain their size. In fact, their eyes sit on top of their heads so that they can better see their prey from a resting position.

What Does the Pacific Halibut Eat?

The Pacific halibut enjoys dining on an array of fish and invertebrates. They include:

These creatures live on the bottom of the ocean floor, which is the Pacific halibut’s ideal place to hunt. However, if the situation requires, they’ll head into more open water where they can catch fish such as salmon and herring.

Like so many marine creatures, the Pacific halibut has many threats due to global warming, overfishing, and natural predators.

Some commercial companies catch wild Pacific halibut using trawl nets. These nets disturb the habitat on the ocean floor and capture other species that end up losing their lives to this fishing practice.

Luckily, there are more eco-friendly ways to catch halibut, including using bottom longlines and a rod and reel. To protect the environment, the government sets regulations restricting the size of commercial gear so that it has less of an impact.

Global warming is having a significant impact on Pacific halibuts. In a study performed by the University of Alaska, researchers found that between 1988 and 2013, the average size of a halibut decreased by more than 75 pounds.

They believe this has to do with warmer water affecting a halibut’s respiration rate, which can alter their metabolic functions.

It’s critical that people take action to reduce the impact of climate change—the first 2,300 feet of water beneath the ocean’s surface gets impacted the most by warming waters, which is where the Pacific halibut lives.

A large body serves the Pacific halibut well—they don’t have many predators aside from the passing shark or large marine mammal.

That said, small Pacific halibuts face many more predators, including smaller-sized fish. Furthermore, some adult halibuts will even eat their own species if a small halibut wanders near them.

A smaller reproduction pool is another threat to Pacific halibuts. Because fishers choose the largest and best-looking fish to keep, it forces the remaining halibuts to reproduce with one another.

As a result, there are fewer options for strong genes to improve the genetic pool and variability during spawning.

The Pacific halibut is not an endangered species. In fact, unlike the Atlantic halibut, which suffers from overfishing, the Pacific halibut’s numbers are stable thanks to well-structured laws and fisheries that grow this fish for human consumption.

The International Pacific Halibut Commission controls how many fish commercial and recreational fisheries can catch each year. As of 2018, they’re allowed to capture a total of just over 2,820 tonnes, which offers enough breathing room for these fish to reproduce and grow at a healthy rate.

Fun Facts About the Pacific Halibut

To round off this article, below are some fun facts about Pacific halibut that you can share with your friends.

The Pacific halibut is a massive fish that’s a point of pride for people who live in the northern Pacific regions. While it’s fun to catch halibut, you should educate yourself on local restrictions to ensure you’re complying with halibut fishing seasons and sizes.