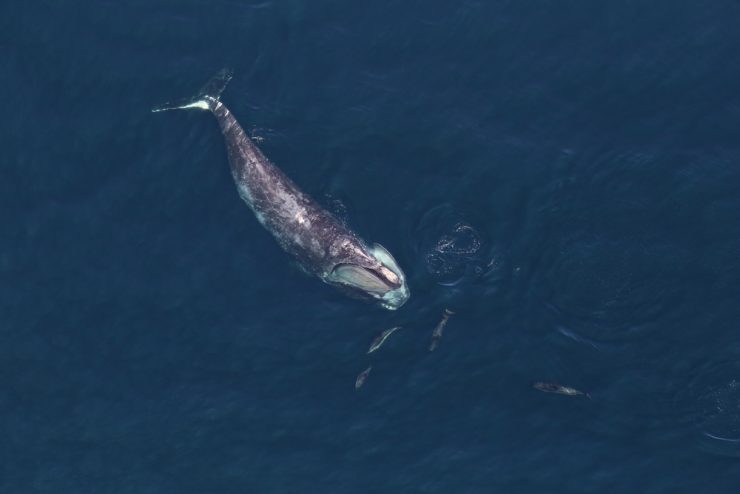 These whales number in the mere hundreds in recent years, with few breeding females and even fewer calves. Fret not, however, these whales have made leaps and bounds toward revitalization over the years, their numbers higher now than they’ve been in many years and steadily rising as conservation efforts tighten by the day,

The North Atlantic right whale is known for its vast, short body that gives it a rounder appearance than most whales. Right Whales exhibit sexual dimorphism, meaning physical characteristics can distinguish their sex.

The North Atlantic right whale is one of the larger species of whale. At birth, the calves can be anywhere from 13-15 feet long and weigh around 2,000 lbs. By adulthood, females tend to be larger than males. Adult whales can get as long as 55 feet and weigh up to 100 tons.

North Atlantic right whales have a dark gray, almost black color. They’re entirely dark except for some distinguishing features like patches on their bellies, scarring, head excrescences, parasites, and callosities. Callosities are usually found near the blowhole, rostrum, or on the face near the eyes and mouth and are home to crustaceans known as “whale lice.” These callosities can be a range of colors, including yellow, orange, white, or pink.

The North Atlantic right whale has a few features that distinguish it from other whales, including the lack of a dorsal fin and grooved throat. Their flippers are wide and short. Their baleen is uncommonly long, reaching lengths of over 16 feet in adults, and they have an arched jaw to accommodate this large baleen. There are usually around 300 baleen plates on each side.

With a head of almost a third of their body size and v-shaped blow that can be over 16 ft above the surface, these whales present a formidable appearance. The right whale has the greatest amount of blubber of any whale species, with thicknesses of up to 28 inches and making up almost half of its body mass.

Although right whales used to live upwards of 80 years, their lifespans are now significantly decreased. Females live to an average of 45 years, and males live for around 65 years. Right whales are polygamous creatures and don’t form any permanent bonds. Both males and females reach sexual maturity between five and ten years old.

The females likely have more than one partner during a mating season. This behavior is likely because the males aren’t aggressive with one another when it comes to finding a mate. They typically mate in the winter, and their young are born in the spring. The female gives birth to only one calf. Females typically only get pregnant once every three to four years.

The right whale prefers to live near the coastline. They typically inhabit deeper waters while foraging for food and mating. They then move to more shallow areas to give birth to their young.

Where Does the North Atlantic Right Whale Live?

As their name suggests, the North Atlantic right whale is found in the Atlantic ocean off the coasts of Europe and North America, although they will venture into much deeper water. They migrate each season, sometimes up to 1,000 miles.

Right whales spend much of the year off the colder coast of New England and Canada. They venture into warmer, shallow waters in South Carolina down to Florida to have their babies.

The North Atlantic right whale is a forager, and its diet is made up of mostly pelagic crustaceans. They don’t hunt and aren’t considered a predator to humans. Instead, the right whale is what is called a filter feeder. They have a unique way of feeding that differs from how other baleen whales feed. The right whale’s baleen is angled to capture prey as they swim along with their mouths open.

What Does the North Atlantic Right Whale Eat?

The right whale’s diet is made up entirely of zooplankton. Their favorite foods are pelagic crustaceans like copepods and krill. They particularly enjoy larger, rice-sized copepods but will eat the smaller ones as well. They’ll also eat smaller invertebrates.

Although the North Atlantic right whale is a peaceful, majestic creature, they are in grave danger of going extinct. They do have a few predators but are mostly at risk due to human threats.

Humans are one of the biggest threats to the right whale. Humans have been hunting this whale for over 1,000 years. They were profitable, as whalers could sell their blubber, oil, and meat. Since they were often found in shallow water and float once killed, they made for easy prey.

While whaling is no longer as prominent, humans still pose a threat to the right whale. These whales often get caught up in fishing nets or struck by vessels. These are the leading causes of death. Humans are now also making more noise in the ocean, which can mess with the whales’ communication patterns and cause them stress.

One of the biggest issues with climate change and global warming is that the oceans are getting warmer. Even small temperature increases can have a big effect. While the right whale isn’t yet physically in danger of rising ocean temperature, their food sources are.

As the water temperatures increase, the right whale’s primary food sources may wind up moving or decreasing in number as their habitats are disturbed. Changing ocean currents and winds may affect these populations as well.

Typically, calves are the targets of predators since they’re considerably smaller than adults. The most common predators are sharks and killer whales. When right whales feel threatened, they’ll band together in a circle. They form the ring with their tails out, and they lash their tails to ward off the predator. They may also move to shallow water in an attempt to getaway.

While most of the threats against the right whale are caused by humans, they can also suffer from skin lesions and parasites. If too many parasites attach to a whale, it can cause problems for its skin.

The current conservation status of the North American right whale is listed as endangered. There are less than 400 right whales left in the world, and the females seem to be dying off more rapidly. Scientists estimate that there are less than 100 female whales who are of breeding age.

Without significant changes, these whales are in danger of becoming extinct very soon. Conservationists are working on setting up designated, protected habitats for the right whales to keep them safe.