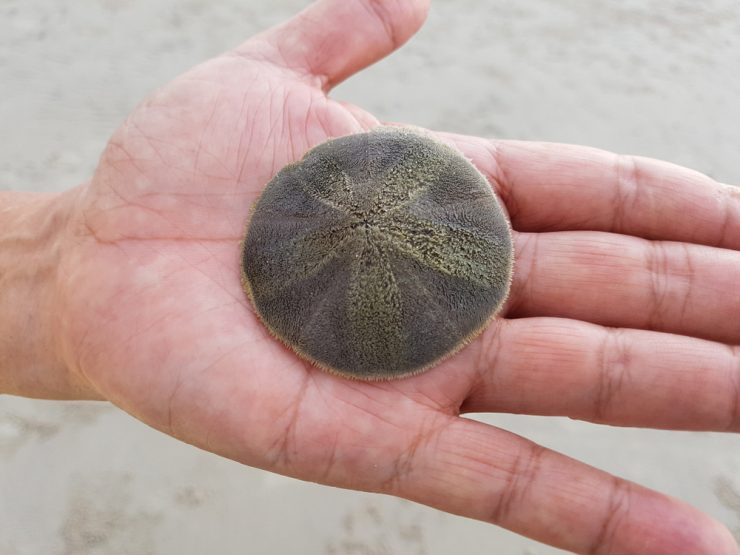 You probably know this creature only as a sand dollar. What you might not realize is that sand dollars are basically a form of flattened sea urchin. Find out more about these intriguing critters below.

You may recognize a dead sand dollar but might not know what the creature looks like when alive.

Eccentric sand dollars can vary in size but have an average diameter of about 76 millimeters. However, the largest known specimen measures 120 mm in width. They are tiny overall and generally don’t weigh more than a single ounce. 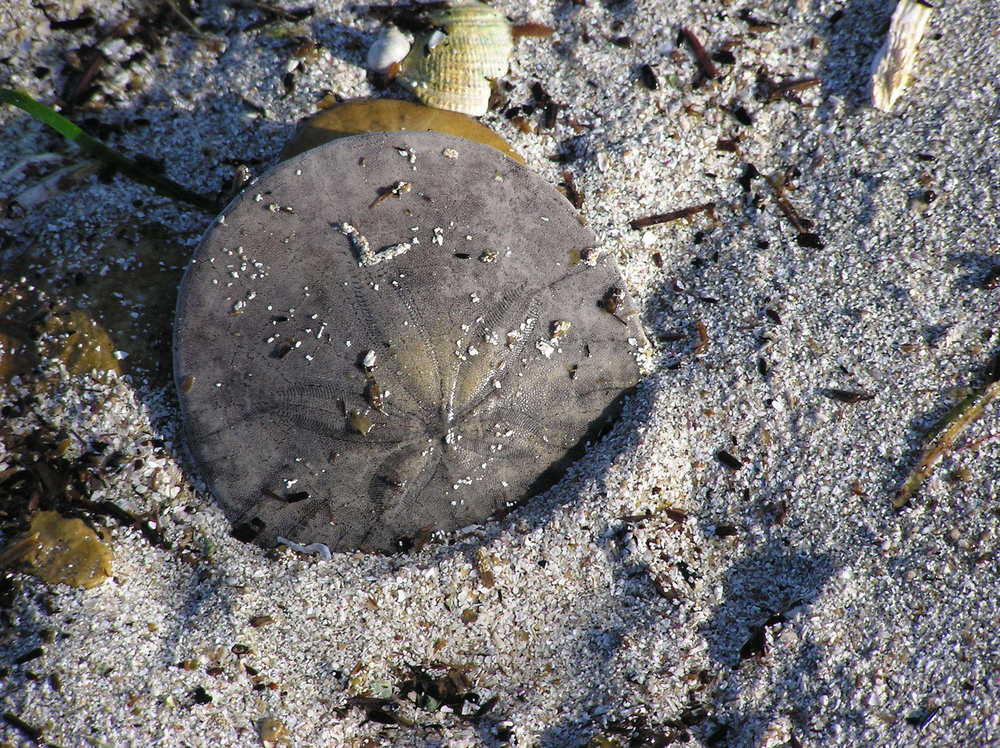 Eccentric sand dollars generally come in shades of purple, black, or brown. Once they die, they reveal their gray or white skeleton. You may have found these sand dollars washed up on beaches in the past.

The body is covered in spiny tube-like feet. These are technically spines but are hair-like, not dangerous.

Eccentric sand dollars have five radial areas on their bottom-facing “face,” used for feeding, respiration, and movement. Their mouths are also located centrally on the bottom side. The anus is situated towards the edge, an evolutionary development.

The adults move by waving their spines, while younger sand dollars use their tube feet to get around. The sand dollars move as if they were lying flat on the ground.

When the current is heavy, the adults will grow heavier skeletons to enhance stability. Meanwhile, the younger sand dollars will swallow heavy grains of sand to prevent being swept away.

Sand dollars are related to sea urchins and can be compared to a flattened sea urchin with tiny spines. These creatures are also related to sea stars and sea cucumbers. Altogether, these invertebrates are known as echinoderms.

Sand dollars have two sexes, but there is no noticeable visible distinction between the two. They practice sexual reproduction upon reaching maturity, usually at one to four years of age. The animals generally spawn in late spring and early summer.

Fertilization is completed externally. The female discharges eggs, which the male then fertilizes. The eggs are covered in a jelly-like coat, which offers protection and prevents the adults from eating them.

This is known as broadcast spawning. It increases the odds of the eggs becoming successfully fertilized. It also helps to avoid fertilized eggs being eaten by predators. In some areas, tens of thousands of sand dollars can be found covering large sea bottom areas as they reproduce.

Fertilized eggs ultimately hatch larvae. The larvae float in the sea for months, subsisting only on plankton. Over time, they develop the characteristic adult skeleton. The creature then settles into the sand at the sea’s bottom and metamorphoses into the sand dollar.

An eccentric sand dollar can live up to 13 years of age. That said, they have various predators that can cut this anticipated lifespan short.

The eccentric sand dollar is found primarily in open coastal areas, low intertidal zones, and subtidally in bays. It’s predominantly found on the northeast Pacific coast, all the way from Alaska to Baja California. This is also where it gets one of its monikers, the Pacific sand dollar.

Where Do Eccentric Sand Dollars Live?

This hardy critter can survive at depths of up to 40 to 90 meters. However, it usually prefers to make its home in shallower areas. It’s the only type of sand dollars found in Washington and Oregon. It’s also been found further afield, in the South Puget Sound.

Eccentric sand dollars will generally crowd together over areas half-buried in the sand. This facilitates their sexual reproduction. You can find as many as 600 sand dollars in a single square meter.

This intriguing animal is a suspension feeder that subsists off a diet of plankton, detritus, crustacean larvae, diatoms, and small copepods.

What Do Eccentric Sand Dollars Eat?

When they feed, they tend to lie at an angle, keeping the anterior end buried in the sand. The creature then uses its tube feet, the pedicellariae, to catch small prey and algae. The food is then passed to the mouth slowly via the feet and hair-like spines.

Like most Echinoids, the sand dollar’s mouth includes a small Aristotle’s lantern structure. This is a claw-like mouth located on the underside of the Echiinoderm’s frame. It has five tooth-like plates, each one pointing inwards.

When eccentric sand dollars are exposed to a steady water flow, they will gather in groups for safety and stability. The creatures will align in rows on the sand, digging the front edge of their body into the sand and raising the back edge into the water flow.

The shape of the sand dollar is a hydrofoil, so when they line up and do this simultaneously, they can quickly draw in food directly into their mouths. Communal feeding is thus not uncommon. 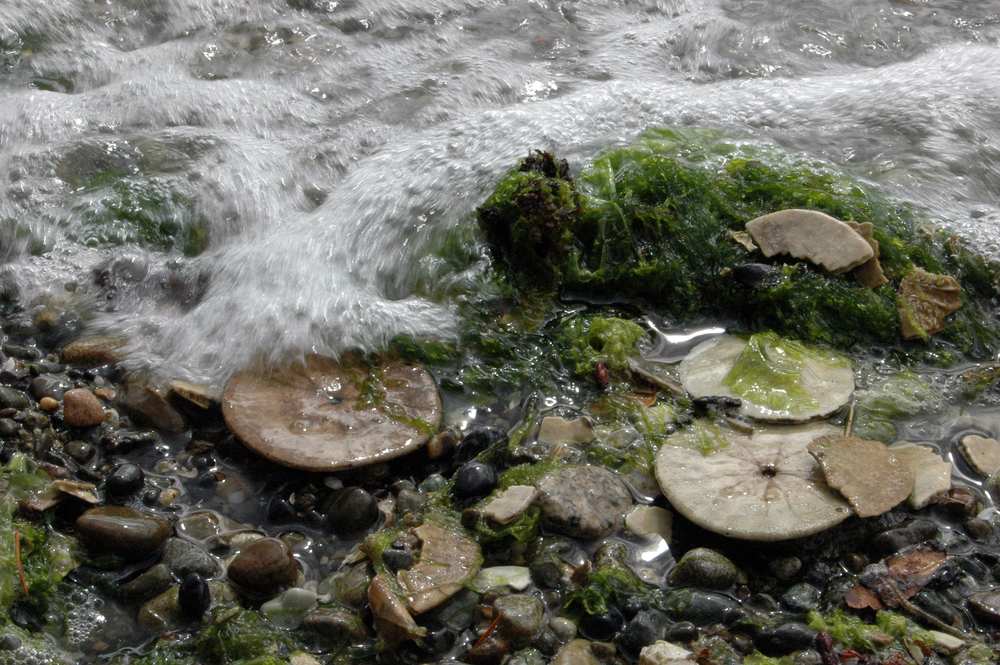 The eccentric sand dollar has many natural predators. Humans are also a problem. Find out more below.

The sandy seafloor that eccentric sand dollars like to inhabit may be damaged by bottom trawling. This is a fishing technique that involves dragging a heavy net along the ocean’s depths. It’s harmful to the natural environment and the creatures that inhabit these spaces.

Some sand dollar populations may also be threatened by humans who use them for decor. The skeletons feature a flower-like print and are collected and bleached for sales in beach-side tourist shops. Problems may arise if humans seek living sand dollars for this purpose.

Eccentric sand dollars are not immune to the threat of environmental changes. Acidification of the ocean and warming of the seas can harm sand dollar populations.

The sand dollar’s natural predators include the starry flounder, crabs, and seagulls. Small barnacles may also settle on the sand dollar, having a parasitic effect.

That said, the primary cause of death for eccentric sand dollars is thought to be old age. Overall, these creatures are relatively adept at avoiding their predators.

The reality is that scientists don’t have a great deal of accurate data available to determine whether eccentric sand dollars are in danger. However, populations appear to be stable overall, and the species is assumed to be generally sound.

As such, there are no significant conservation efforts to protect eccentric sand dollars at this time. Of course, this may change if it appears that sand dollar populations are under threat or in decline anytime soon.

How Long Do Bluefin Tuna Live?

What Is the Biggest Goliath Grouper Ever Recorded?