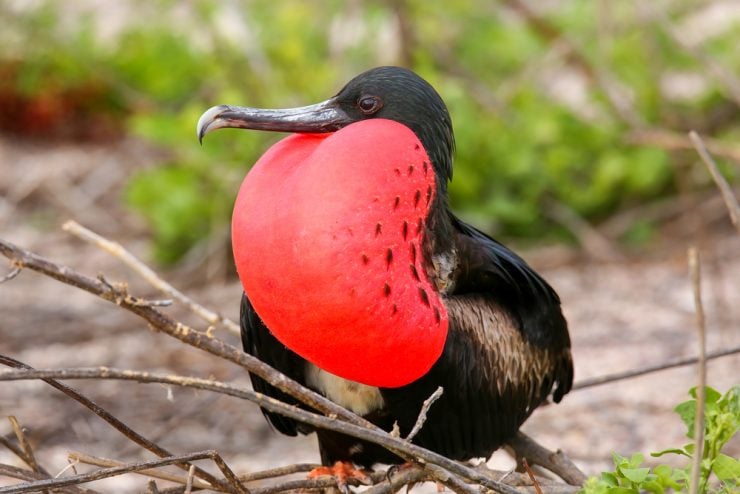 The Magnificent Frigatebird is a species that is not easy to miss. Its incredible flying ability, large wingspan, and slow wing movements have earned them comparisons to aerialists and even pterodactyls. With their distinctive red throats, beachgoers and fishers can spot these birds over tropical waterways throughout many parts of the world.

Magnificent Frigatebirds are large birds with black feathers. The exception is the male, which has a distinctive red throat patch that he keeps inflated during mating season.

These birds are known for their large size and magnificent flying ability. They do not flap their wings often, preferring to soar for incredible lengths of time without moving. They may be highly aggressive toward smaller bird species, stealing their food.

The Magnificent Frigatebird is a larger-than-average seabird with a wingspan of up to eight feet. Despite its large size, it weighs between 2.4 and 3.5 lbs on average, with a length of up to 45 inches.

Magnificent Frigatebirds have black feathers with white patches. The males are particularly striking, with a purple tint to their feathers and a characteristic red gular. The gular is a bright red pouch on the throat which they inflate during mating season.

Females have white patches on their chest. They tend to be larger than the males. They also have blue rings around their eyes. Juveniles have larger patches of white and tan. As they reach maturity, their feathers grow darker.

Unlike most seabirds, Magnificent Frigatebirds do not have waterproof feathers. For this reason, they do not swim, even though they have webbed feet. They can only stay in the water for a few minutes before their feathers become waterlogged.

The Magnificent Frigate is an unusually long-lived bird. Even in the wild, they have an average estimated lifespan of about 14 years. The oldest Magnificent Frigate in captivity was 19 years old when it died. However, scientists estimate that the bird could live up to 30 years if it remained unharmed. In the wild, death often occurs as a result of hurricanes and human interference.

The species also has an unusually long breeding period. They may mate at any point throughout the year. Whenever a male courts a female, he inflates his characteristic red throat pouch, then performs an aerial performance accompanied by shrill cries. A female Magnificent Frigatebird may choose between several males performing this courtship ritual at the same time.

The Magnificent Frigatebird lays only one egg at a time. It makes its simple nest out of twigs, usually in a shelter of plant life near the shore. The species has a highly unique cooperative parenting style: for the first three months of the juvenile’s life, the male cares for it. Then he leaves, often to find a new mate and breed again. At this point, the mother takes over and cares for the juvenile for nine months more.

The Magnificent Frigatebird is the only known seabird species to have varying breeding cycles.

The Magnificent Frigatebird is usually found off the coast of warm waters. Occasionally it may be spotted inland when crossing waterways or far off into the ocean. However, they do not often venture far from saltwater.

The birds make their nests on islands and along the coast. These are usually in dense shrubbery but may be in trees or even on the ground.

Where Do Magnificent Frigatebirds Live?

The Magnificent Frigatebird’s eating habits are famous, earning them many nicknames throughout history. If you are on the coast and hear seagulls screaming, it may be because a Frigatebird has decided to steal its prey.

Frigatebirds have two main ways of gathering food. The first is by skimming the water or the beach. Unlike many other seabirds, they do not dive for prey; they scoop it from the shallows with minimal effort.

The second and more notorious way is by scavenging from other birds. Frigatebirds chase seabirds to compel them to drop their food. Even more violently, they may grab other birds by the tail feathers and force them to regurgitate their prey so that they can claim it.

What Do Magnificent Frigatebirds Eat?

The Magnificent Frigatebird has a wide and varied diet. Generally, it survives on small fish, but it may also eat smaller crustaceans and newborn green turtles, as well as squid and jellyfish. Most surprisingly, they may occasionally eat eggs and even other smaller birds such as terns. The Magnificent Frigatebird is a common sight around fishing boats, where they wait for scraps to skim off the surface of the water.

The Magnificent Frigatebird is not in immediate danger of extinction. However, that does not mean that there are no threats to the future of this species. Most of these threats affect the birds through the loss of their prey or habitat rather than involving them directly.

The most significant way that humans pose a threat to the Magnificent Frigatebird is by destroying their habitat. This bird species prefers to nest in dense shrubbery along the coast. As humans encroach on its territory, it may be forced out of its natural habitat. Similarly, human hunting of species like dolphins and tuna may affect the Magnificent Frigatebird’s ability to access its prey.

Climate change and global warming have the potential to affect seabird populations in profound ways. Rising sea levels may eliminate their habitats, especially small islands, where they build their nests. Similarly, the waters may also destroy the habitats of many species upon which Frigatebirds depend for their diet, such as green turtles. Warmer water temperatures, meanwhile, can also have an effect on the food chain as well as on seabird populations directly.

The Magnificent Frigatebird has no known predators. The exception to the rule may be that mammals may sometimes steal their eggs from nests on land. But since Frigatebirds are such careful parents, this does not happen often. The parents monitor their nests around the clock.

One particular threat for the Magnificent Frigatebird is the decline in marine life like dolphins and tuna. This is because the Frigatebird depends on such species to drive smaller fish up to the water’s surface, where they can hunt them.

Like much other marine life, the Magnificent Frigatebird could also potentially be affected by ocean pollution. Contaminants like oil or plastic waste can affect seabird populations, sickening or killing them.

The Magnificent Frigatebird is not considered to be under immediate threat. However, the species is on a protected list from the Galapagos National Park. Although they are not directly threatened, populations could potentially decline in the future. There are several reasons for this, including the destruction of their habitat and breeding grounds and the extinction of other species they rely on for food.

Fun Facts About the Magnificent Frigatebird