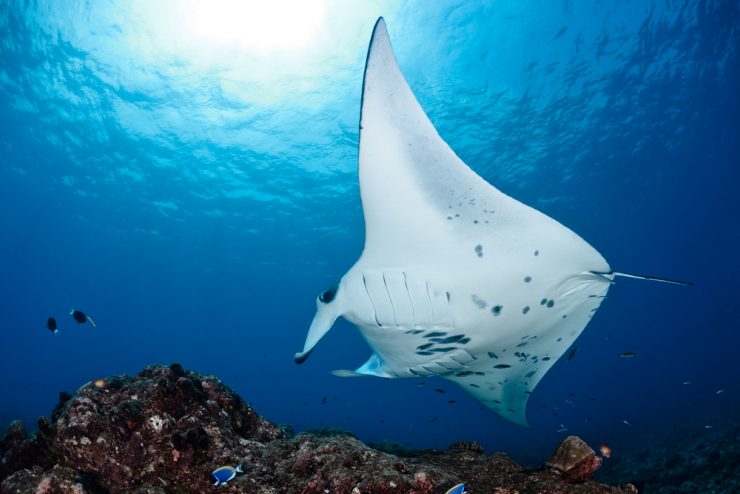 The giant manta ray, also known as Mobula birostris or Mantra birostris among scientists, is one of the 630 different species of ray known to humankind. Due to overhunting and other human industrial activities, the IUCN (International Union for Conservation of Nature) lists the giant manta ray as “Endangered.”

Giant manta rays are also sexually dimorphic. That means you can tell whether an individual giant manta ray is male or female based solely on looking at them. While giant manta rays’ visual differences come down to a lot more than biological sex, sex is one aspect that influences each ray’s appearance.

Female giant manta rays are larger than males, having a wingspan of 18.3 to 22.7 feet. Males, meanwhile, measure 17.3 to 20.3 feet from wing to wing. Giant manta rays can grow past those averages, though, with the widest one known to researchers measuring 30.3 feet. They can weigh anywhere from 2643 to 3084 pounds.

Giant manta rays’ backs run a gamut of colors, from brown to blue to black. They have white underbellies with unique, dark splotching patterns. Sometimes, giant manta rays will have light-colored splotches on their backs, too. Researchers have used both of these patterns (or lack thereof) to identify individual manta rays.

Their skeletons are made of cartilage (the same substance that makes up human ears and noses) to help giant manta rays manœuvre effectively through the waters. They also have lobes that point from their heads, which they roll up while swimming and lay flat while eating. Meanwhile, you find their gills on their underbellies.

Of course, the most distinctive physical trait of the giant manta ray is its wing-like fins. Giant manta rays are born with their fins wrapped around them, but they unwrap themselves relatively quickly. Giant manta rays’ wingspan is longer than their head-to-tail size.

Giant manta rays are polyandrous, which means that one female will take on multiple male partners in her lifetime. The courtship rituals consist of a female giant manta ray swimming faster than usual—5.6 to 7.5mph—as a group of males pursues her.

After no more than half an hour of the chase, the female will slow down and allow a male to bite onto one of her wings. The male will then slide under her, place his clasper into her cloaca, and deposit sperm. This transaction lasts about one-and-a-half to two minutes. Afterward, the chase will resume, and a second male will be allowed to mate with the female.

Giant manta rays mate from December through to April. Courtship and mating take place in waters with temperatures of 79ºF to 84ºF and reefs 33 to 67 feet deep. Gestation takes 13 months. Following this period, pregnant females will give live birth to 1 to 2 pups. As soon as the infants’ wings unwrap, they can protect themselves.

Giant manta rays live in warm, tropical ocean waters and inhabit reef and coastal biomes. They do not dive very deep, usually only going down 40 feet. While they will venture out away from shorelines, they tend to stay closer to them. There is more food available to giant manta rays along shores.

Where Does the Giant Manta Ray live?

Giant manta rays congregate the most along:

Giant manta rays eat by filter feeding. They use their mouths and their frontal lobes to gather up prey. They then suck up the water. Prey will get caught in filtering tissues at the back of the rays’ mouths. At no point do giant manta rays use their teeth to eat.

Researchers have noted that giant manta rays will swim in long ovals as they hunt and feed. Experts don’t know the exact reason for this behavior, but they think it might be to keep prey animals as close to the feeding rays as possible.

What Does the Giant Manta Ray Eat?

Giant manta rays are carnivores. More specifically, they are mostly planktivorous—that is, they eat plankton most of all. Also, giant manta rays will eat small fish and shellfish.

As with most, if not all, endangered animal species, the giant manta ray’s biggest threat is human activity.

One of the most pressing threats humans pose to giant manta rays is the fishing industry. People will hunt manta rays for their gill plates first and foremost, with food and other uses being contributing factors, too. Moreover, when industrial and non-industrial fishers aren’t necessarily looking to catch giant manta rays, these creatures can still get caught in nets and other equipment.

Ocean pollution is another possible issue for giant manta rays. Researchers are concerned that waters polluted by oil, acid, and other contaminants contribute to population depletion among giant manta rays.

Climate change impacts giant manta rays due to how it affects their prey. When ocean waters get warmer, it can disrupt plankton life cycles, causing their numbers to drop. As such, scientists fear the giant manta ray will see negative repercussions to its lifestyle and life cycle. These disruptions could further devastate giant manta ray population numbers.

Parasites will occasionally attach themselves to manta rays’ bodies, though they are not a significant threat to giant manta rays overall.

The CITES (Convention on International Trade in Endangered Species of Wild Fauna and Flora) has placed restrictions on trading giant manta rays. Certain countries, such as Maldives and Indonesia, have also restricted or banned giant manta ray hunting.