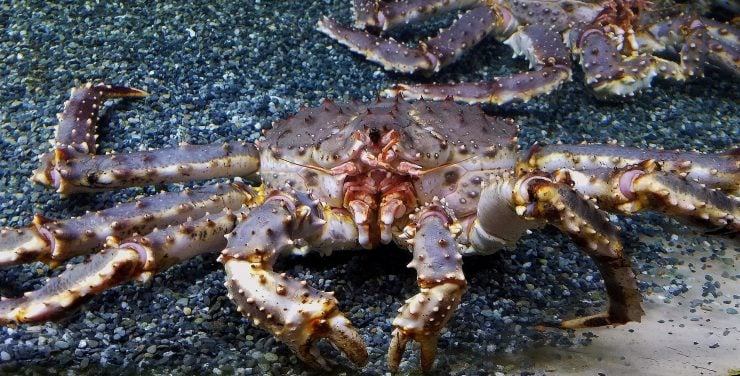 The blue king crab or Paralithodes platypus is the largest of the king crab species. It is distinguished from the red or gold king crab by its size and coloring – up to 18 lb when fully grown and brown with royal blue highlights. 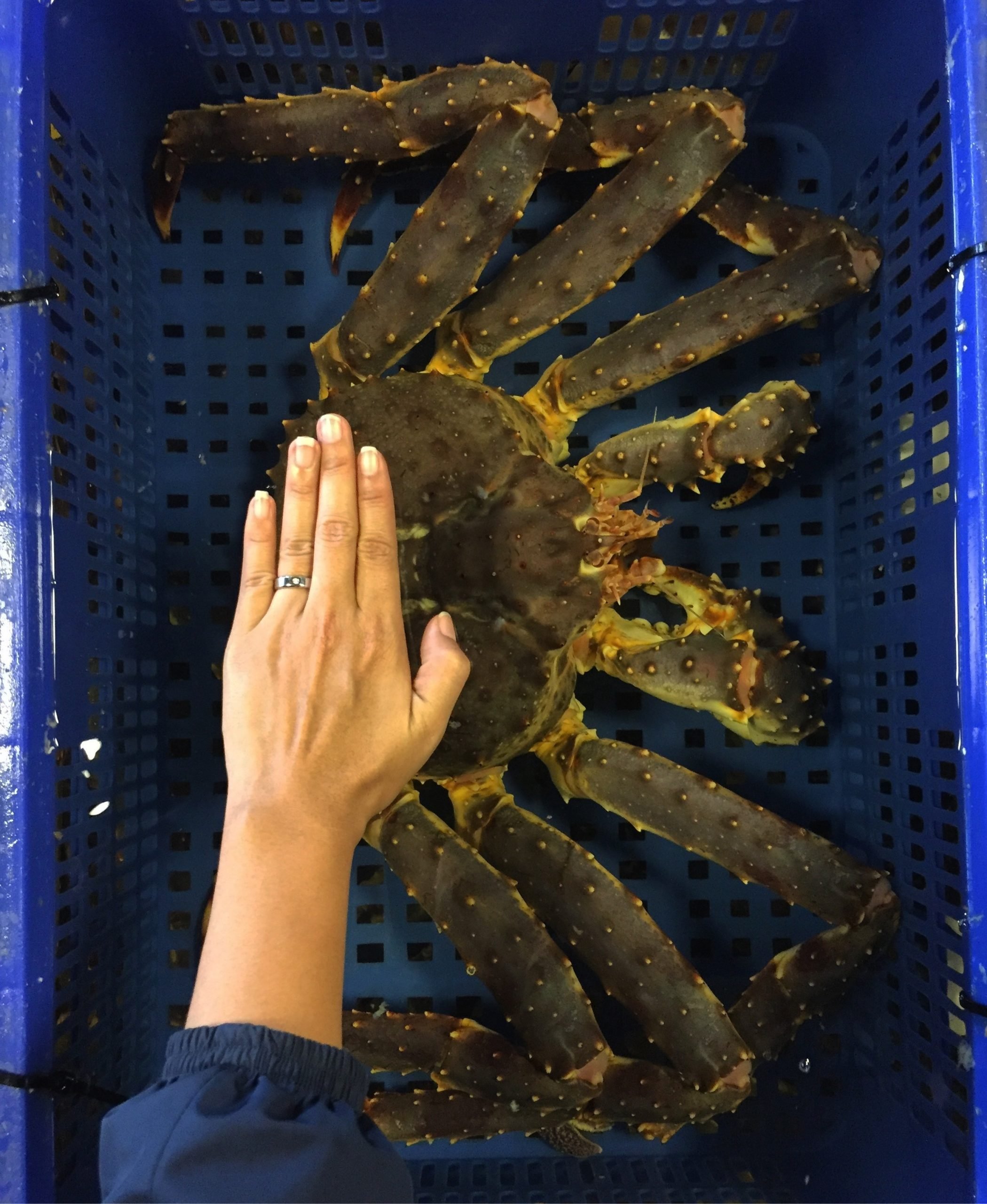 First, the new shell begins to grow underneath. Then the existing outer shell splits open, and during this time, the new shell finishes growing underneath. In this period of its growth, the new shell can be soft, and the blue king crab is vulnerable to its predators, such as other crabs, fish, sea otters, and octopus.

The ten legs of the blue king crab are matched in five pairs. The first pair of legs contain the crab’s pincers. Usually, the right claw is the largest. There are three sets of ‘walking’ legs, while the fifth pair is smaller and generally tucked underneath the back part of the shell. The females use the little legs to clean their embryos, and the males use their little legs to transfer sperm to the female when it’s mating time. 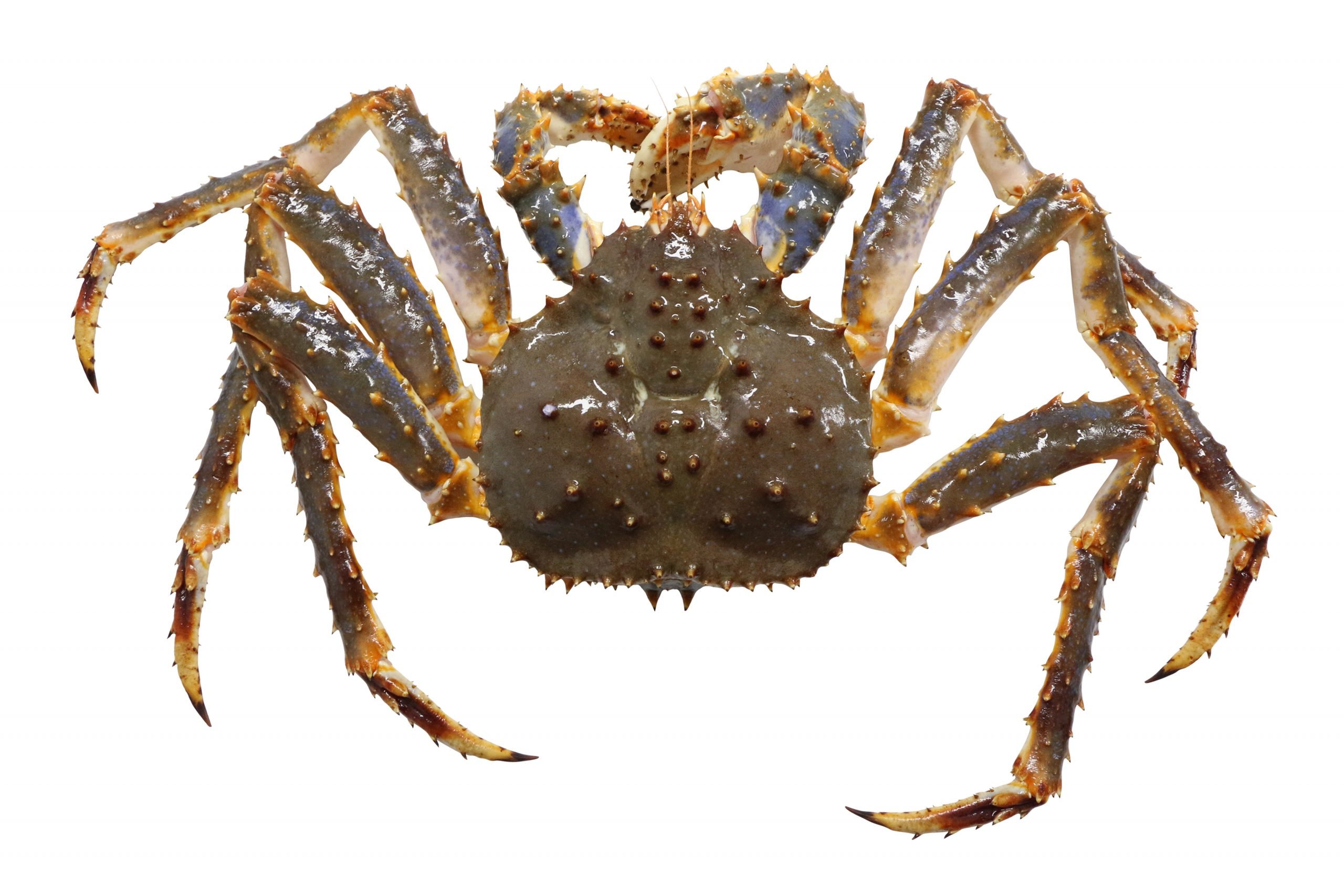 Normally by examining hard parts of the shell, scientists would determine the age of the blue king crab, but those come off during molting, making it difficult to estimate the average lifespan of the blue king crab. It is thought, however, that they can live for 20 to 30 years.

Blue king crabs spawn biennially. During spawn years, females molt and then mate, spawning up to 150,000 eggs. From January to February, the female crabs carry the developing fertilized embryos for approximately 14 months.

They hatch their eggs from February to May of the next year, depending on the water temperature. In the Pribilof Islands, female crabs release their larvae around the middle of April, while in other areas, larvae release occurs earlier in the year.

It takes approximately 29 days for a female blue king crab to release her larvae.

The larvae go through four stages lasting around 10 days each. Colder temperatures slow the development of the larvae, and the warmer the temperature, the faster the development. In the first stage, the larvae (or zoeae) need to find food, phytoplankton and zooplankton,  within 60 hours. 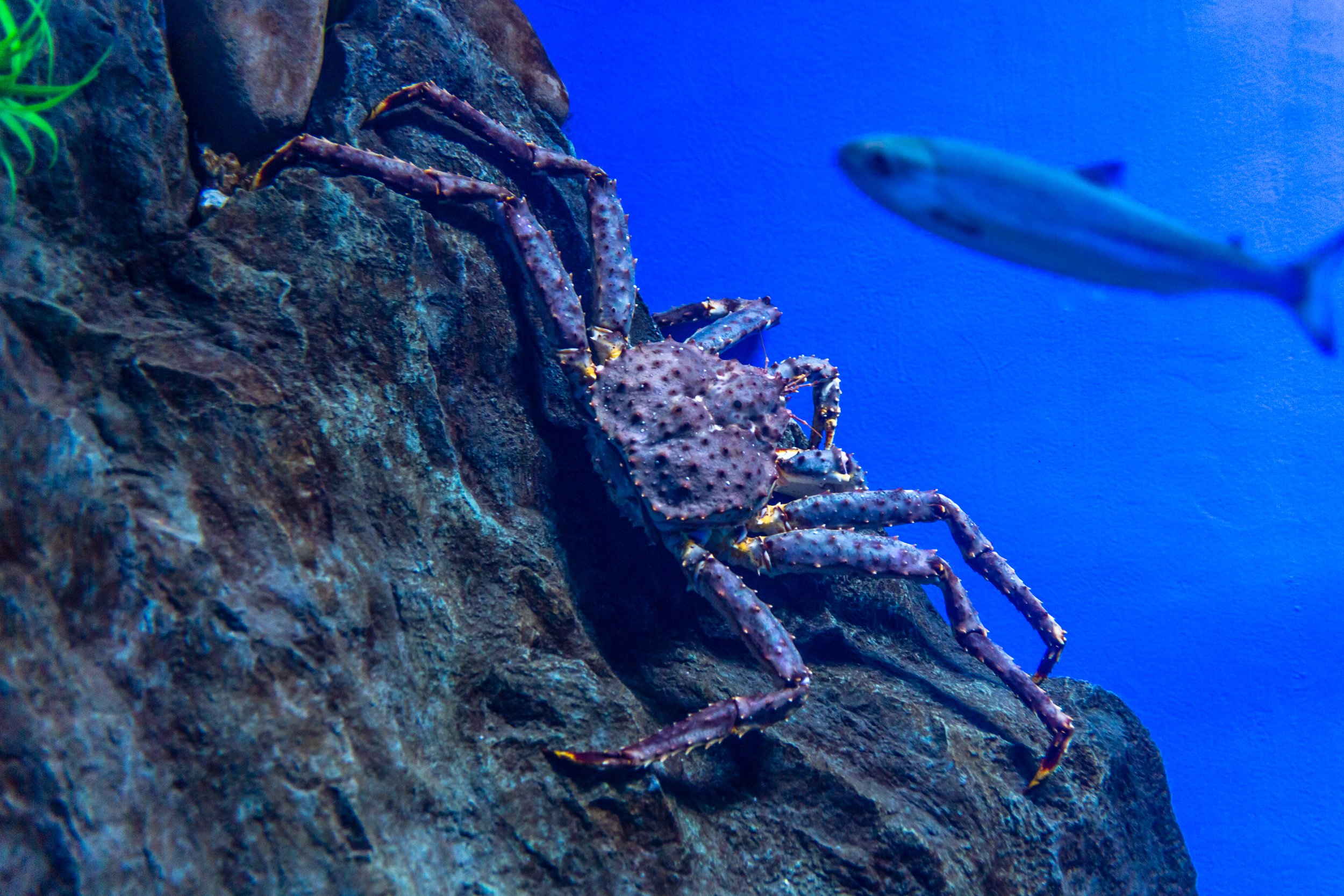 In the fifth stage, the larvae do not eat, but transition from larvae and this is when they take on the shape of a small crab.

They can still swim, using their abdomen as a tail. In this stage, the larvae search for the best place to settle and then molt to the first juvenile stage. Total, the larvae stage lasts for an estimated 2.5 to 4 months. During July to September, the larvae metamorphose.

About half of the blue king crab population reaches maturity at 5 inches, while St. Matthew Island female crabs can become mature at 3 inches (along with Diomede crabs).

The bigger female crabs in the Pribilof Islands produce the most eggs, 162,360 eggs (110,033 larvae per crab). There is a reduction in fecundity of approximately 33% between egg and larvae stages. Japanese blue king crabs each release an average of 120,000 larvae, and Diomede crabs 60,000 larvae each.

Where do Blue King Crabs live?

Blue king crabs live in a variety of cold water locations. From Japan (Hokkaido) to the Sea of Okhotsk, the Siberian coast to the Bering straits, you can find blue king crab. In the Bering Sea, they live in the waters off St. Matthew Island and the Pribilof Islands.

What do Blue King Crabs eat?

The blue king crab is an omnivore and will eat almost any dead or decaying plant or animal material it finds. Blue king crabs diet varies by water depth and species.

Humans remain one of the largest threats to blue king crabs. There has been no directed blue king crab fishing since 1999; however, the population continues to wane. In the past, it was a popular catch and million dollar industry for commercial fishers. The Pribilof Island blue king crab fishery was closed in 1988 due to low crab populations. Since 2002, the area has been thought of as overfished.

There has been little to no increase in the population since 1995.

Blue king crab is still caught, legally, in fisheries that target other types of species. The blue king crab is caught by trap rather than trawl or other bottom fishing gear types, which can destroy its habitat. Thus, the ecosystem is largely safe. Although the Diomede blue king crab population has never been commercially harvested, there is a subsistence fishery in the Native Village of Diomede, Alaska, whose population is 170. 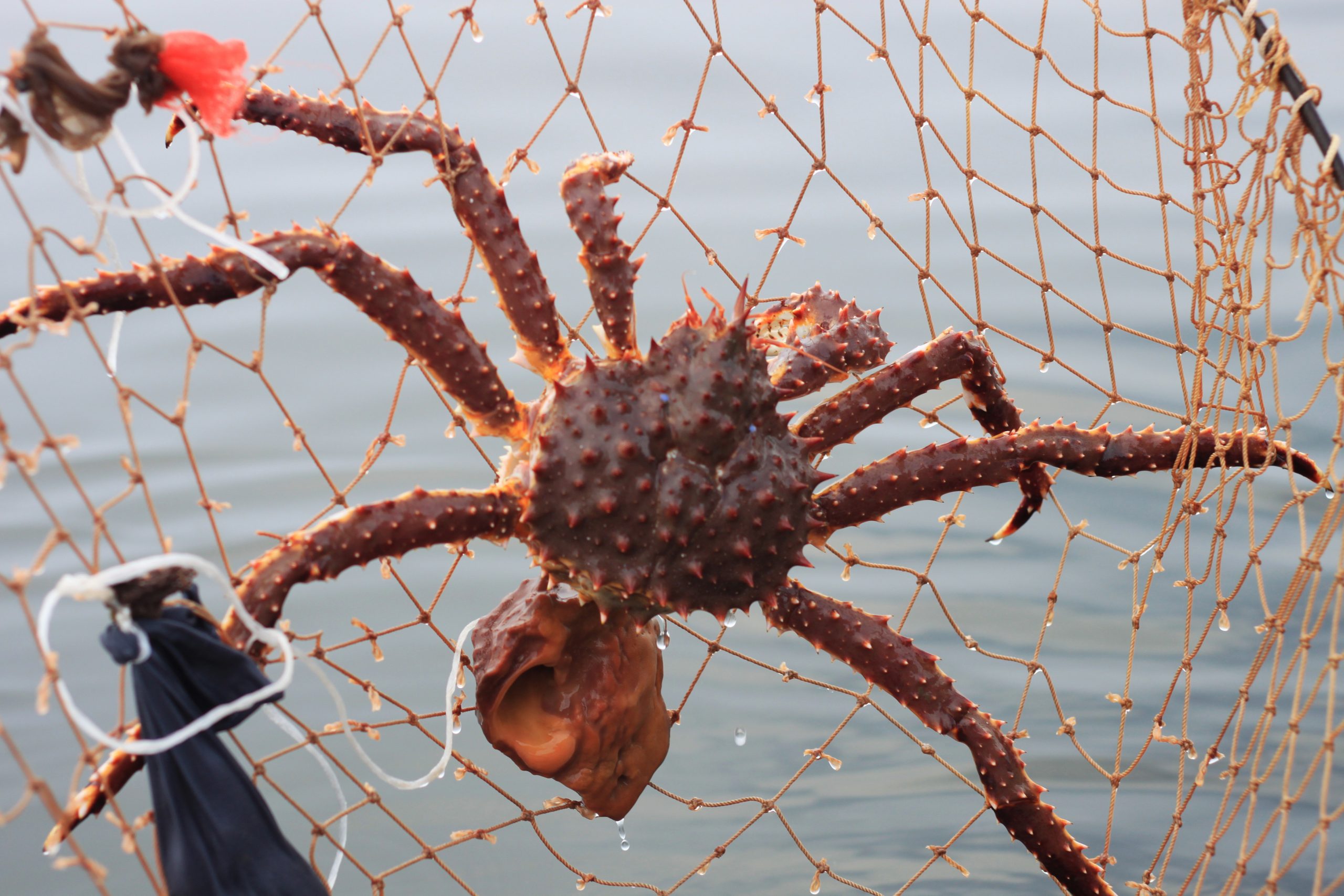 Predators of the blue king crab include other crabs, fish (halibut or Pacific cod), sea otters, and octopuses.

Habitat destruction is considered another threat to the blue king crab’s survival.

What is the Difference Between Red and Blue King Crab?