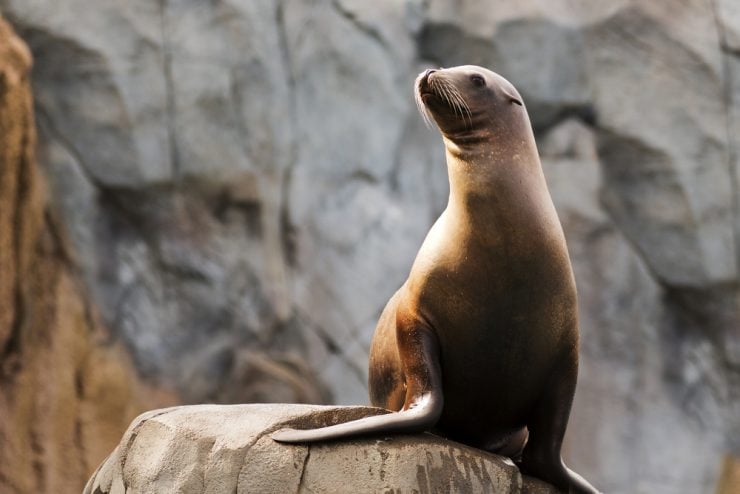 The California sea lion, whose scientific name is Zalophus Californianus, is only one six types of sea lions that roam the earth. Currently, this sea lion is classified as “Least Concern,” due to its increasing population size.

California Sea Lions are dark brown at birth, weighing around 16 pounds. By the time the pup (a baby sea lion) reaches five to six months of age, they molt (lose) their baby coat and grow into their adult color.

This sea lion species is sexually dimorphic, which means you can determine a California sea lion’s gender by its appearance. Males and females have different appearances and trademark features for each gender. 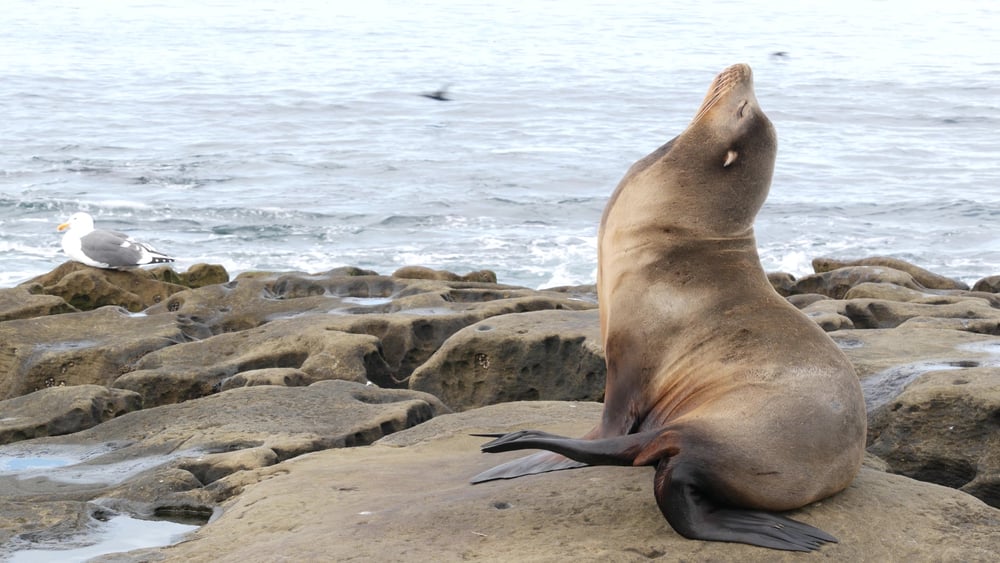 Male sea lions are larger than females or juveniles, growing up to seven feet long and weighing between 600 and 850 pounds. On the other hand, females only get up to six feet in length and weigh between 200 and 250 pounds.

Males have light to dark brown or black fur by adulthood. And adult and subadult males have a pronounced forehead crest with tufts of light hair. They may also light tan markings on their face.

Juveniles and adult females have slender bodies with tan or blonde coats. They may have a light silver or gray pelage (fur coat) after molting.

All California sea lions have broad front flippers, long, narrow snouts, and hind flippers with three to five claws on each side. They use these flippers to walk on land or to swim. And this species of sea lion has external ear flaps. 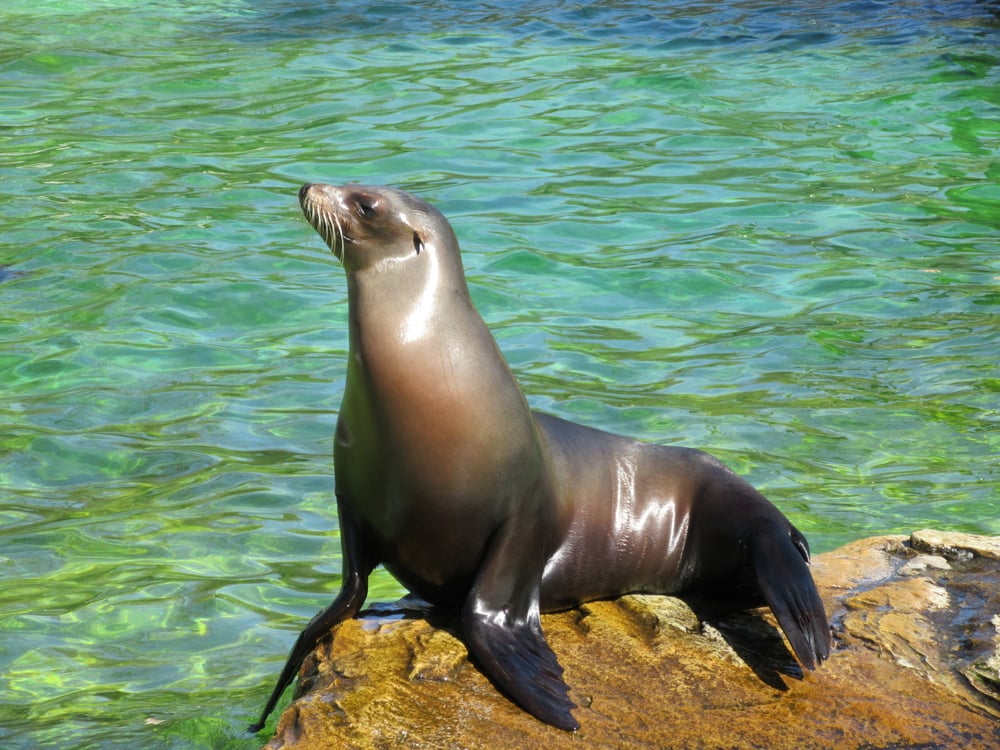 California sea lions have a lifespan of twenty to thirty years. Males are polygamous, meaning they take more than one mate. Each male creates a breeding territory with up to 14 females and becomes aggressive if a threat intrudes on their territory.

The breeding season for this sea lion species occurs from late June to early August, with pups being born between May to June. Females are ready to mate again just three to four weeks after giving birth. 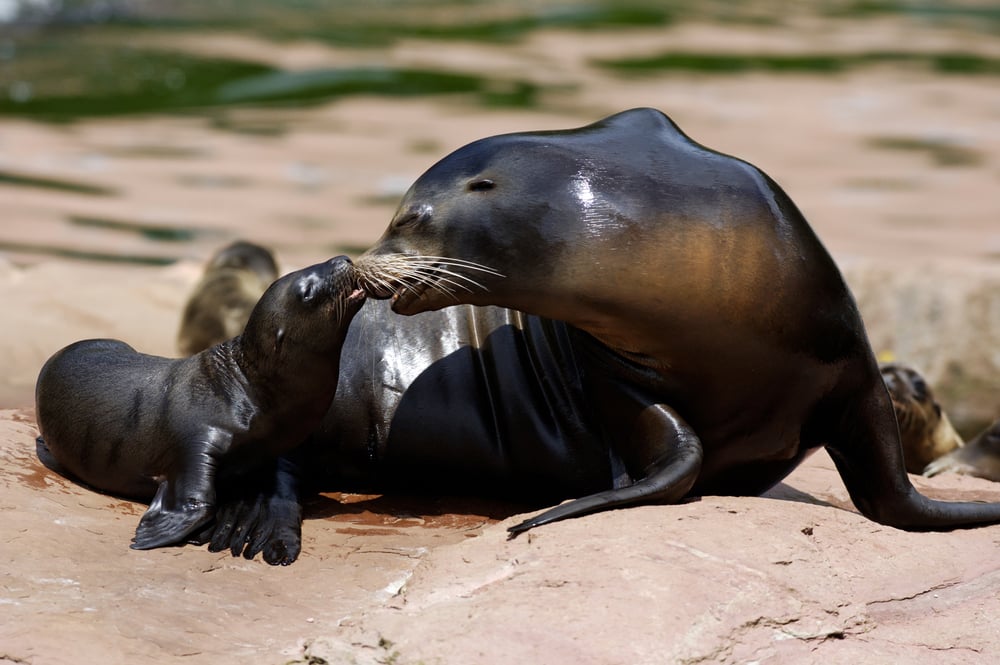 Mothers nurse sea lion pups for one to two days before heading out to sea to feed for two to five days. She then returns home to feed her pup again.

While the mom’s away, the pup will not eat. This pattern occurs until the pup weans or stops relying on the mother’s milk for their food, which takes about a year. Yearling pups may try to hunt on their own, putting them at risk of predator attacks.

Most California sea lions breeding occurs on offshore islands from the Channel Islands in southern Cali down to Mexico. A small population of pups lives on Farallon and Año Nuevo Islands, located in central California.

California sea lions are a coastal species that live in shallow waters, on tidal islands, or in bays along the eastern North Pacific Ocean. During breeding, this species uses rocky coves, sandy beaches. They haul-out on these sites, too, as well as on buoys, jetties, and marina docks. 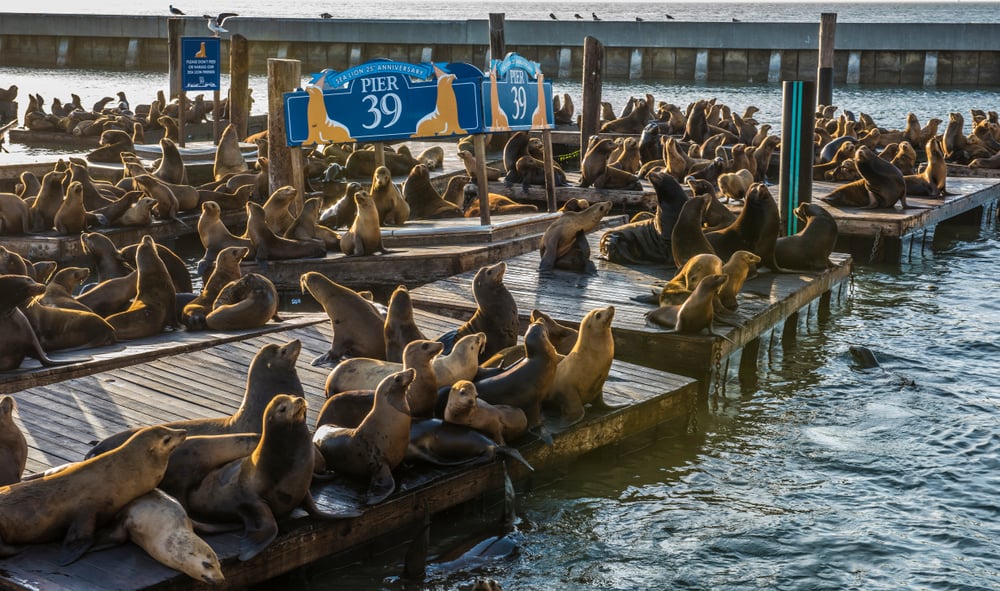 Where does the California Sea Lion live?

You can spot California sea lions as far north as Vancouver Island, British Columbia in Canada south to Baja, California, near Mexico. A distinct population also lives on the Galápagos Islands. You can also spot this species in southeast Asia.

California sea lions have a diet that primarily consists of seafood they can forage from mainland coasts, seamounts, and continental shelves. Some might dive to the bottom of the ocean floor for their meals.

Adult females stay within 6.2 to 62.1 miles from shore to feed, while males may go as far as 280 miles when the water is warm. California sea lions may eat alone or in groups.

And it’s common for this species to work with other hunters, including seabirds, dolphins, and porpoises, when chasing schools of fish.

What does the California Sea Lion eat?

Despite their large size, adorable appearance, and vast intelligence, the California Sea Lion does have predators and other threats to their survival.

Humans can pose a severe threat to California sea lions. The biggest risk is getting tangled up in fishing gear, including gillnets, traps, and pots.

Many times, sea lions can drag this gear along for long distances, which can cause them to suffer fatigue, affect their ability to feed, and cause severe injuries. In some cases, these entanglements can cause a reduced ability to reproduce or death.

Many humans also ignore the laws that forbid feeding sea lions, which can cause this species to become trustful of humans. This issue can potentially lead them to stop hunting for food and make them approach the wrong humans to take food off fishing boats, resulting in retaliation by the fishermen. 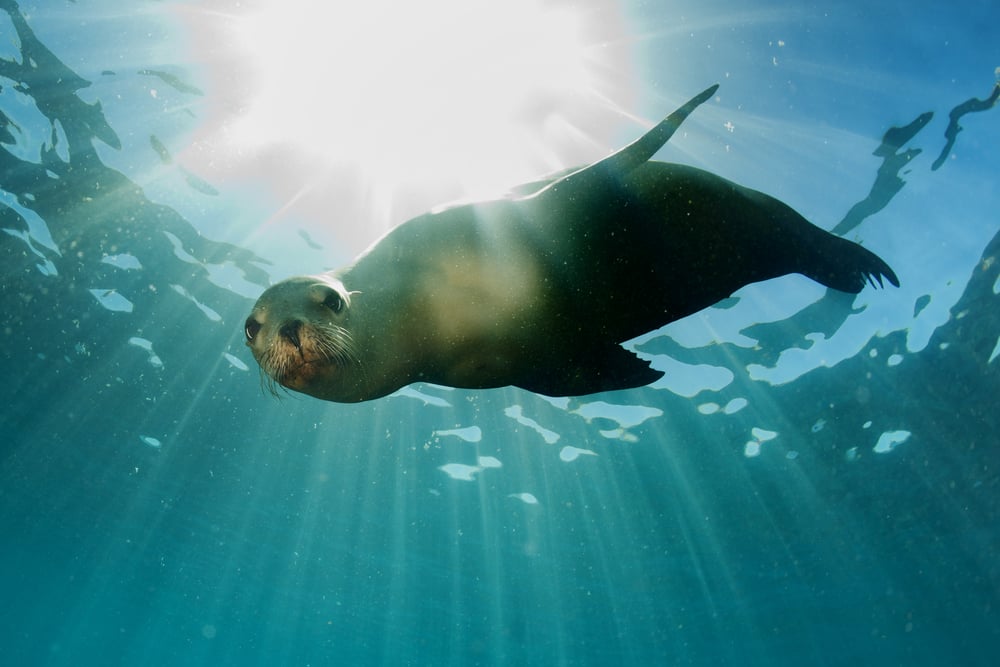 Climate change and global warming have caused the oceans to be warmer than they should be, which provides the perfect conditions for algae blooms.

Warm waters also cause female sea lions to go further out into the ocean to hunt in cooler water. This means longer periods before the mother can return to nurse her pups, leading to malnourishment or starvation of pups less than a year old.

California sea lions have many animal predators that put them at risk of becoming a larger species’ meal. Common water predators of this sea lion are large sharks and killer whales.

Sea lions are a typical meal for killer whale pods. White sharks and shortfin makos are the two most common sharks to eat this sea lion species.

On land, the California sea lions, mostly the young, smaller ones, are at risk of bald eagles, feral dogs, and coyotes.

Another serious threat to California sea lions is harmful algae, which can bloom out of control during ideal growing conditions. Unfortunately, some of these algae blooms contain toxins that can poison sea life, including the fish sea lions used for their primary food source.

The toxins from algae can build up in a sea lion’s body from consuming infected prey. This condition can lead to seizures or death by domoic acid poisoning.

Studies show that California sea lions’ population has been on a steady incline with a 6.2% average growth since 1983.

According to the IUCN (International Union for Conservation of Nature), this species has the label of least concern, which means there’s a large population that keeps them from being at risk of becoming endangered or extinct.