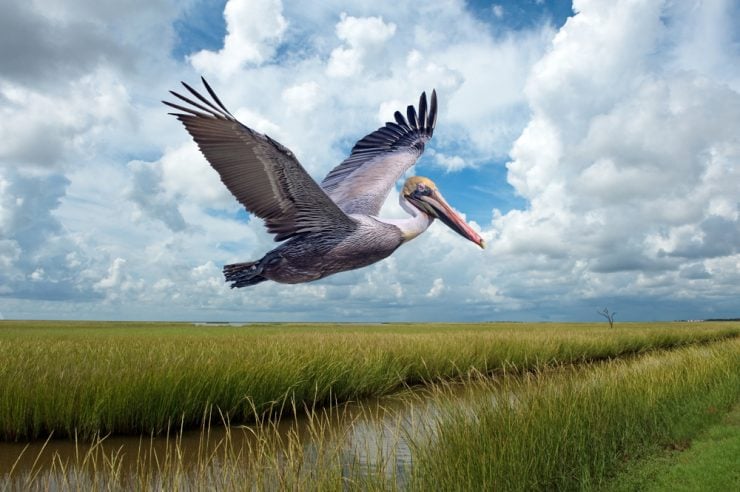 The brown pelican, scientifically known as Pelecanus occidentalis, is a beautiful, social bird that primarily lives along the east and west coasts of North America. Visually, they are graceful in flight, and although they’ve been on the Endangered Species List, the brown pelican has since recovered to a more robust status today.

Brown pelicans are the smallest in the pelican species and have a unique, vibrant appearance with a distinguishable wingspan. They typically fly in a ‘V’ shape or a single file.

Brown pelicans are large, much like a goose, though they are smaller than other pelicans species. Both male and female brown pelicans vary from 39 to 54 inches long with a wingspan of 78 inches. They typically weigh up to 176 ounces or at the least, and each bird may be as light as 71 ounces. 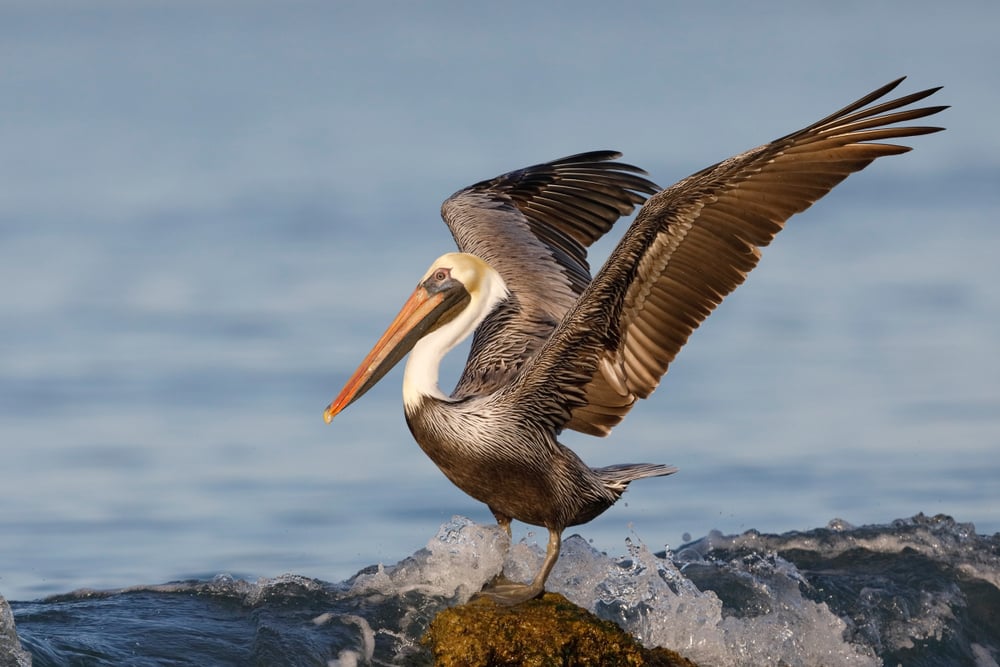 The brown pelican’s physical appearance varies from greyish brown with white on the breast and belly in infancy to a darker grey and brown color with white necks and light yellow on the head and face. Brown pelicans have a unique appearance with many color variations.

Their eyes change in color numerous times as they grow and develop and depend on the season. For example, a brown pelican with brown eyes will change to a lighter brown or blue during the breeding season.

Brown pelicans shed their feathers six times from birth to adulthood. A dark reddish-brown color forms on the sides of the bird’s neck when they reach three years. The brown pelican’s beak is nine inches in length. Beneath their beak is a large throat pouch used for fishing. Under their throat, their skin is dark green.

The brown pelican enjoys a lifespan of up to 30 years. Every year the breeding season begins between March and April for adult brown pelicans. This process starts with the male pelican building a nest to attract a mating partner. 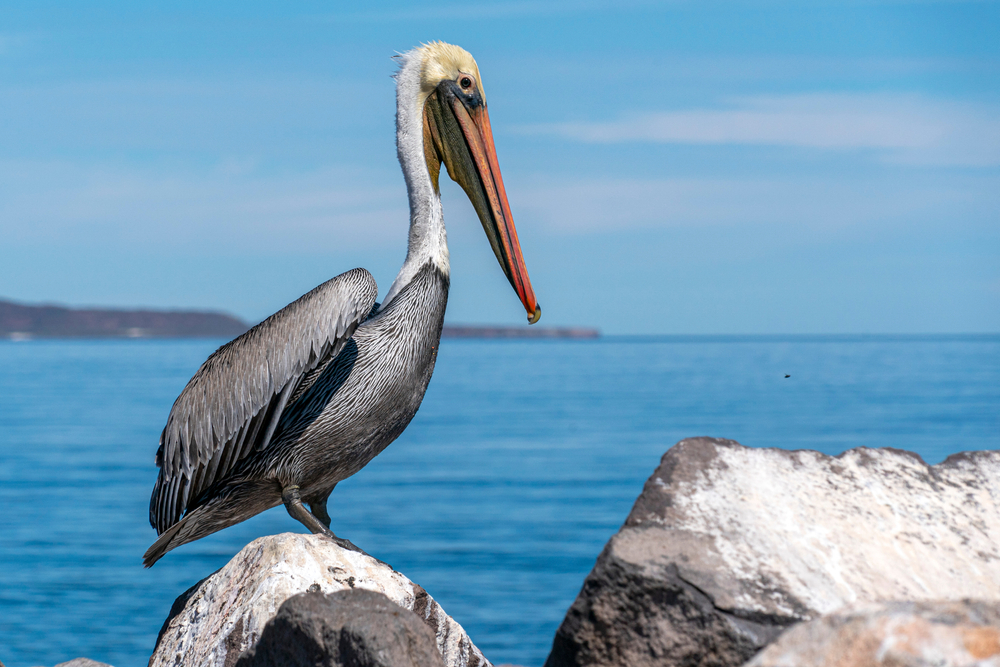 The materials used to construct nesting includes sticks, small bones, seaweed, and reeds. These nests are usually built on the ground in a small hole or areas concealed with leaves or soil for protection. The nest-building process usually takes up to one week (roughly seven days).

Adult brown pelicans form pairs each mating season. They typically stay with the same mating partner. Some brown pelicans migrate south to breed unless they remain in the same region year-round. The time frame for building nests varies depending on the climate, the materials, and the food they find around their habitat. Female brown pelicans lay two or three small white eggs at a time.

The eggs take between 28-30 days to incubate, and both the male and female brown pelicans alternate between incubating the eggs and feeding the babies. The fledging process can take up to 70 days. Feeding is done by regurgitating food from the adult brown pelicans to the pelican chicks.

Brown pelicans live in colonies and usually reside in areas without land-based predators such as islands. They live off the seacoasts on islands where they are safe from land predators, consistent along both west and south coasts. Brown pelicans typically stay in flocks or groups when they nest and fly.

Where do Brown Pelicans Live?

Brown pelicans rarely come inland unless they are in large groups and only in southwest coastal areas such as southern California. The brown pelican is found in various regions such as the south part of the Amazon River in Brazil, Virginia, and along the coastline from California, the Galapagos Islands, and Chile.

Brown pelicans are spotted in several states along the Gulf Coast, such as Texas, Louisiana, and Alabama. They live in wet and marsh-like areas in tropical areas around saltwater coastlines. 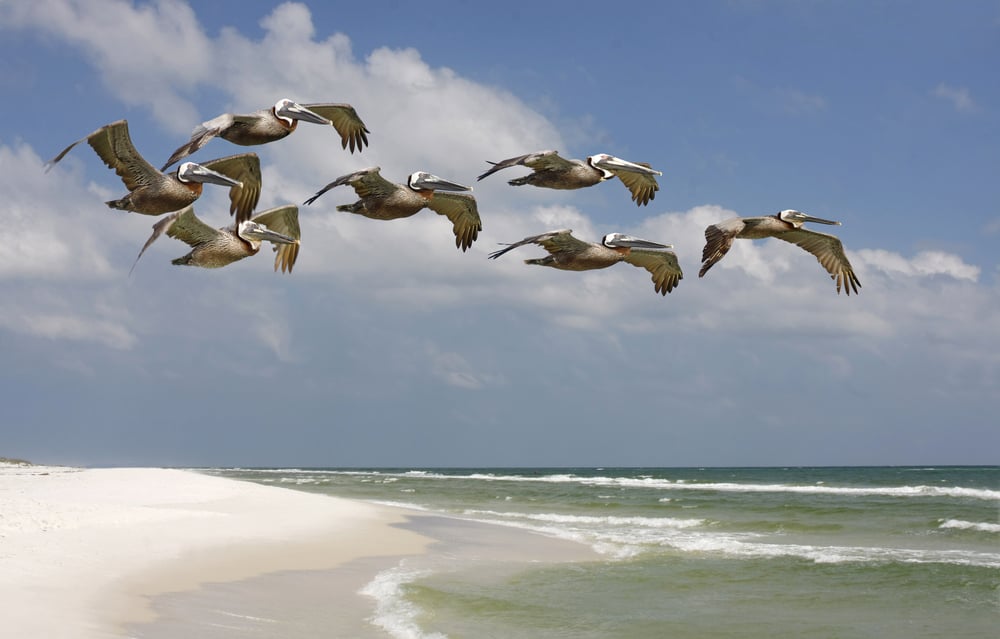 What do Brown Pelicans eat?

The brown pelican’s diet consists mostly of fish. They use several methods to catch fish: they take a sharp dive into the sea to scoop their food or swim and skim the water with their throat pouch to the net as many fish as possible. Brown pelicans are carnivores or piscivores due to consuming mostly aquatic-based food.

The brown pelican has exceptional eyesight, which allows them to see small fish and sea creatures from 22 yards above the water. This advantage gives them a head start on diving directly to fetch their prey. While they cannot see well underwater, they can drink salt water when they catch fish. 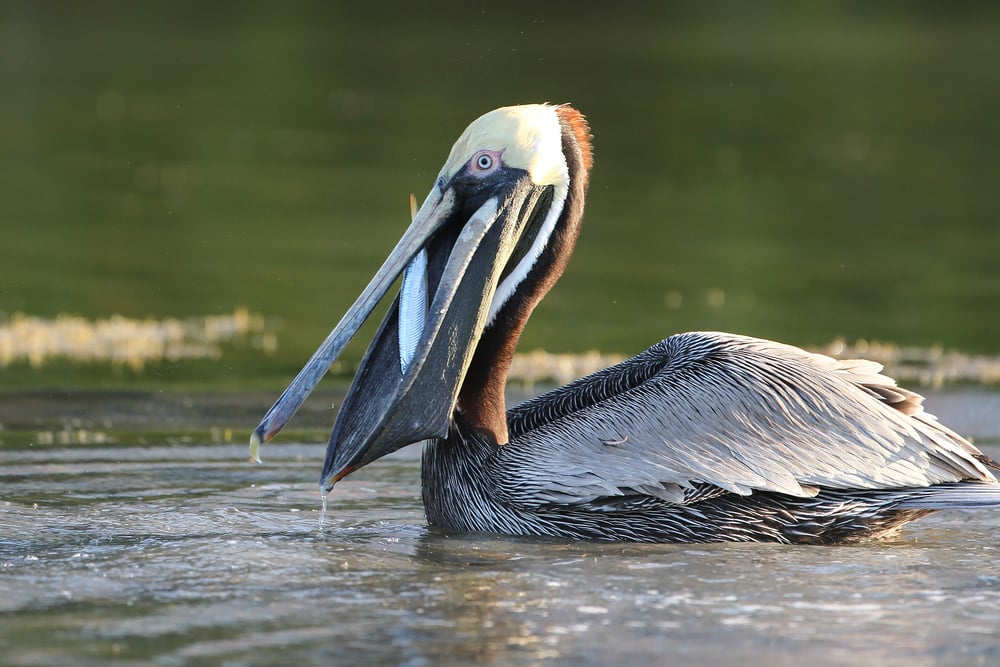 Humans hunt brown pelicans for their feathers, eggs, and meat. Pelican eggs and meat are used for food, and the feathers are used in research due to their unique appearance. Commercial fishing negatively impacts them by lowering their food sources and the equipment used in the process, such as fish hooks, lines, and netting.

The oil spill of 2010 also had a significant effect on the brown pelican, which impacted over half of the population. While the long-term impact on the species is not entirely known, the brown pelican has made an impressive comeback since.

In the 1950s and 1960s, the brown pelican experienced a threat to their survival due to DDTs’ heavy use. Scientists’ significant effort and reduced use of DDT helped restore the species to their expected population in 1990. While climate change has impacted their habitat to a degree, the brown pelican has successfully adapted to areas susceptible to more hurricanes because there are fewer predators as a result.

Brown pelicans avoid predators by flying and moving in groups when they travel over land or sea. They typically live and nest on islands where they are isolated and relatively safe. Nests are concealed as much as possible to protect their young from reptiles and feral animals.

The most common predators that target eggs and pelican chicks include reptiles, alligators, wild dogs and cats, and raccoons. Sharks and sea lions attack adult pelicans individually, which is why they fly in flocks over water.

Many species of animals hunt the brown pelican. Adults pelicans fly from their nests to scare off predators and protect their young. Due to many predators, brown pelicans have learned to adapt to changing habitats and areas with less predatory threats.

Hunting pelicans is one of the ongoing threats to the species. Large fishing operations account for hundreds of deaths due to entanglement and fishing instruments left behind. Other debris and leftover equipment also interfered and threatened pelicans, including wires and abandoned marine gear.

Since being declared an endangered species decades ago, the brown pelican is now categorized as “Least Concern” due to a remarkable return to previous numbers before their endangerment. The brown pelican is currently under protection by the U.S. Migratory Bird Treaty Act.

Fun Facts About the Brown Pelican

Some interesting facts about the brown pelican make them stand out from other birds and other pelicans.