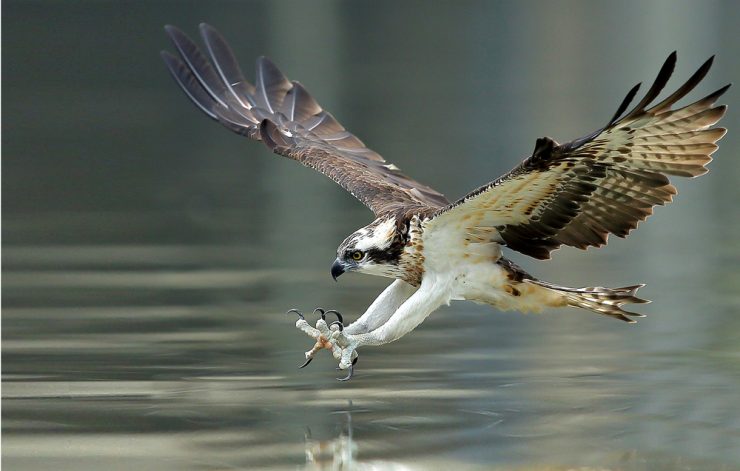 The osprey can be found worldwide, typically across coastal areas and large inland lakes. Once considered an endangered species in the 1970s, the osprey has since made a significant recovery with consistent reproduction. 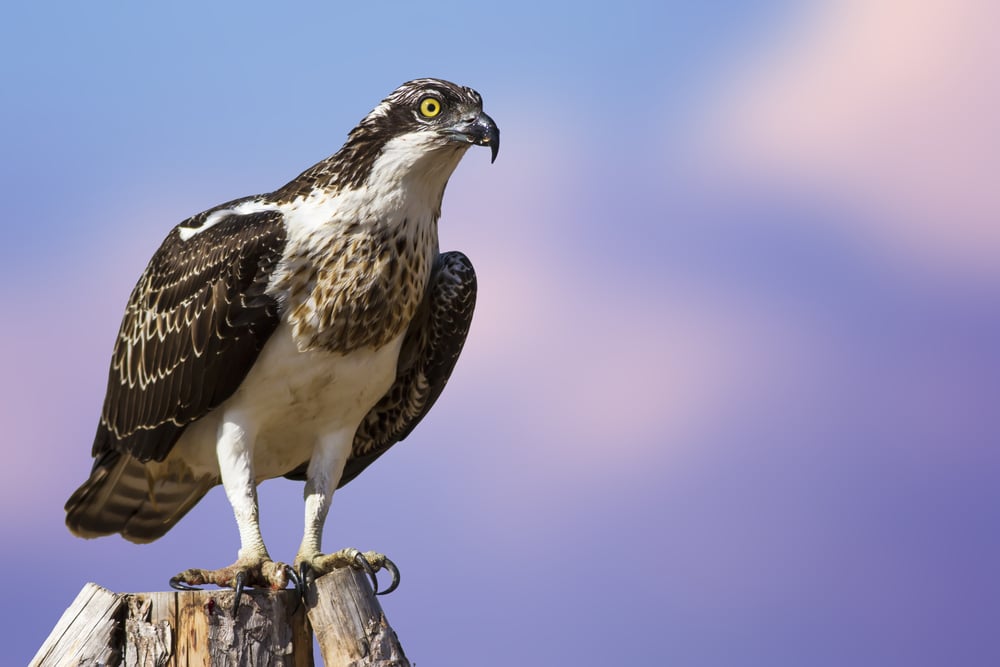 The osprey is a large bird of prey distinguishable by its white underparts and long narrow wings. The adult male osprey ranges from 2 to 3.5 pounds, with females within a slightly larger range of 2.75 to 4.25 pounds. They measure approximately 22 to 25 inches, with a wingspan of four to six feet wide.

A visually distinct fish-hawk, the adult osprey has dark brown upperparts and pure white underparts. Its breasts are white, speckled with deep brown spots with additional brown marks on the wings. Its head is seen as white with a dark crown as well as a deep brown stripe that extends through its eye and down the cheek.

Juvenile ospreys look similar to adults apart from the white tips on their upper body feathers. As they mature, their eye color may transition from a dark brown to a golden yellow. 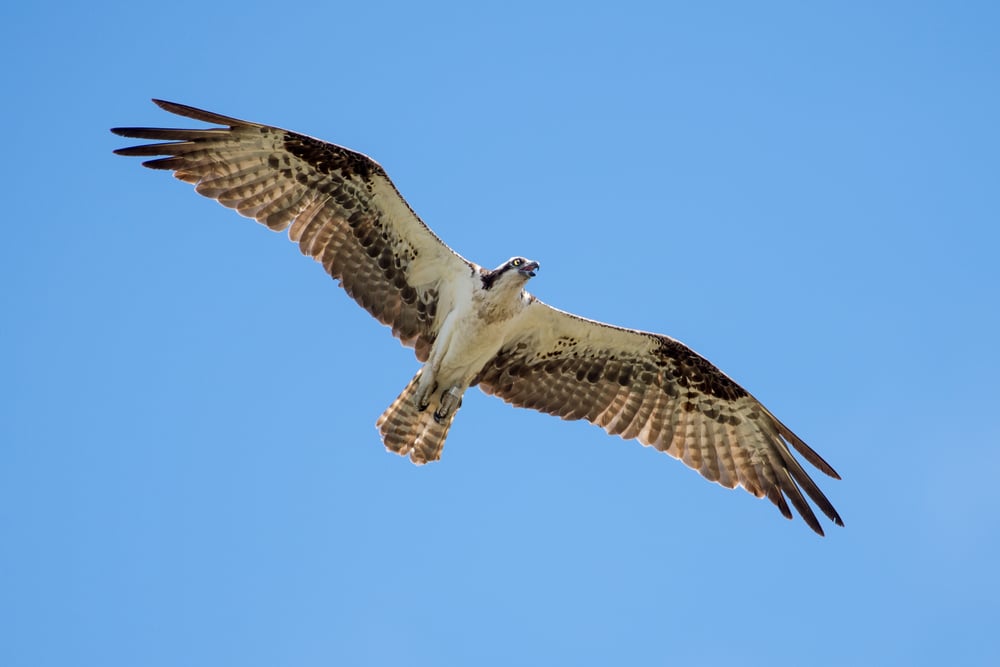 The osprey’s unique hunting abilities result from its long, hooked talons covered with spicules. These spicules resemble short, spikelike protrusions and allow the birds to apply a firm grip on their captured prey. Additionally, ospreys have reversible outer toes that enable them to grasp their prey with both toes, either towards the back or the front.

The osprey also has a compact and dense plumage, useful for reduced wetting as they often submerge themselves entirely into bodies of water while preying for fish.

These large raptors are known to live for approximately 15 to 20 years; however, the oldest known osprey survived to be 35. Nearly half of young osprey can die within the first year.

On average, the female osprey lays around three brown speckled eggs in the spring, with a month-long incubation period. The conspicuous nests are often constructed on the top of dead trees and are typically revisited and reused by pairs for every breeding season.

Juvenile offspring are ready to fledge from the nest once sixty days have passed after hatching. Upon fledging, the young ospreys remain with their parents for up to two months. After two to three years, they head north in search of a mate for breeding. 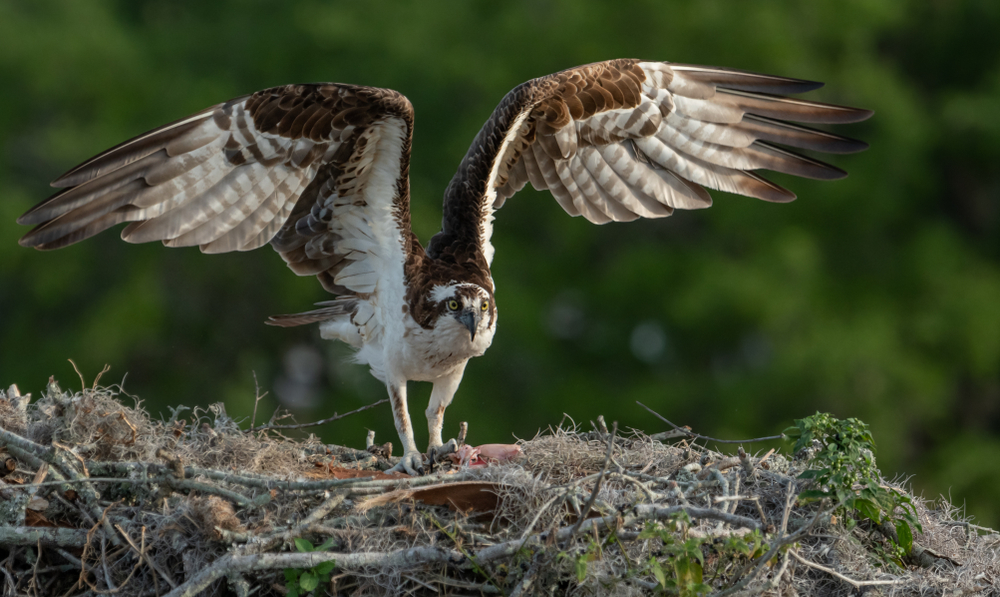 Where does the Osprey live?

Ospreys are widely distributed and can be found on every continent, including the United States, with the exception of Antarctica due to the frozen water surfaces. Their habitats are typically located near water, both fresh and salt, for easy access to prey.

Ospreys will migrate from wintering sites towards the southern coasts. During migration, ospreys can at times be seen over places far from water, including deserts.

What does the Osprey eat?

The osprey’s diet comprises almost entirely of fish, with a selection of species that varies with region. They typically prey on fish that range from 4 to 12 inches long. Common prey includes mullet, sucker, smelt, gizzard shad, bullhead, and flounder. 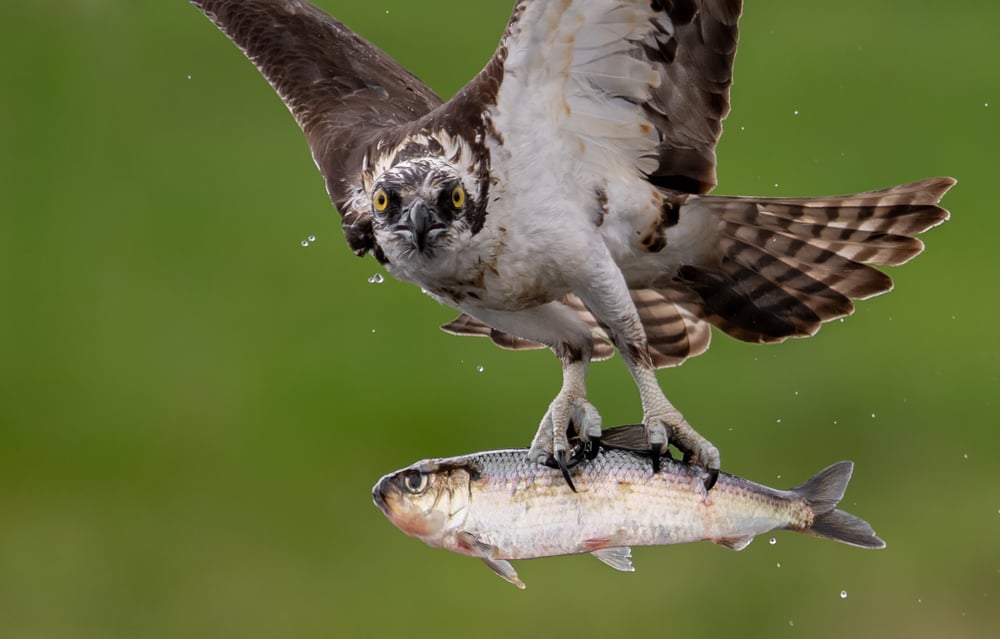 In addition to fish, ospreys may occasionally prey on small birds, eels, snakes, and frogs, likely only when fish are scarce.

These birds will hover over their prey before swooping into the water, feet first, to grab a fish. Upon capturing their prey, ospreys often carry them back to the nest arranged headfirst and facing upright.

While the osprey was considered endangered in the mid 20th century, its species has since risen in the global population and is not currently considered to be under threat. However, the production of toxic materials and the effects of climate change have impacted the well-being of ospreys.

In terms of human threats, hunting and egg collection were widespread in the late 19th and early 20th centuries.

However, there was a much more drastic decline in ospreys between the 1950s and 1960s—this time due to the introduction of organochlorine pesticides, such as DDT. The toxicity levels had damaging effects on many birds of prey species, which resulted in thin-shelled eggs that would break easily under the female’s weight. Since the outlaw of DDT in the 1970s, many of these birds of prey species, including the ospreys, have since made a significant recovery.

Despite this recovery, many nesting sites are still vulnerable to unmanaged recreation along the coasts as well as increased urban development, which can demolish their habitats. Careless litter that gathers along shorelines, such as plastic six-pack rings, are often used as nest material and can result in young osprey’s strangulation. 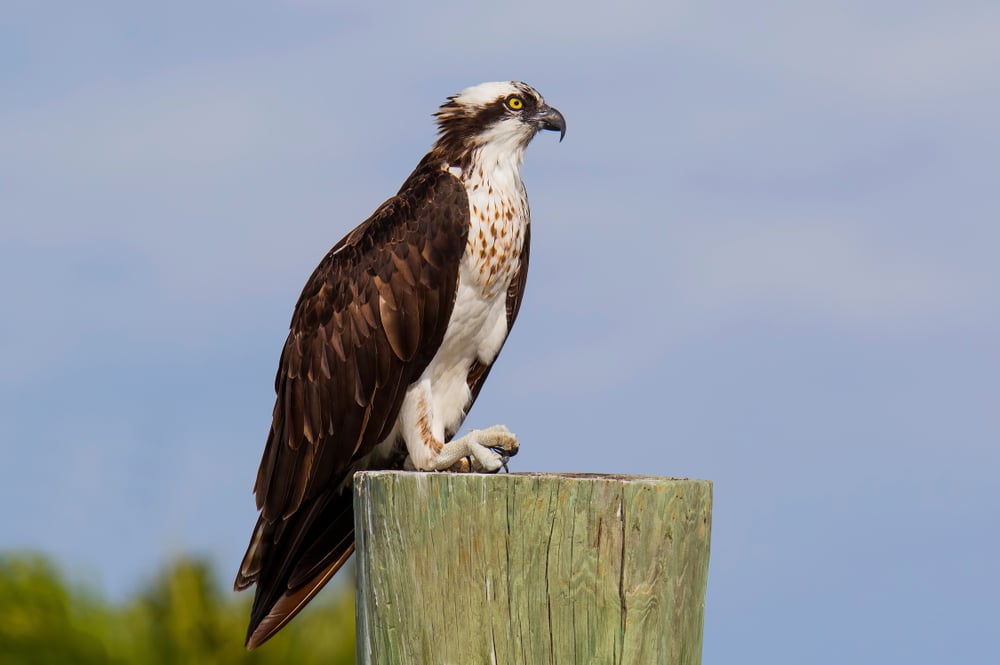 Human interference can also affect the nesting process, scaring away the adult ospreys and hindering them from tending to their young. In addition, human proximity encourages the presence of predators, such as raccoons, that may destroy nests or steal prey.

The increased global demand for wild fish has had a massive impact on aquatic ecosystems. Sustainability is not guaranteed as fisheries are expected to become depleted due to the over-harvesting of fish by humans. This will result in insufficient prey for fish predators like the osprey, which will impact their survivability.

Based on the Audubon climate model, the osprey is expected to lose an estimated 79 percent of the summer range by the year 2080 as a direct result of global warming. While there is some potential for the species to expand in northern regions, it’s likely that insufficient prey will be available in stable portions. Sea level rise may affect this as well, in addition to the disruption of their coastal habitats.

Shifts in climate change have also altered the timing of migration, breeding and nesting for many species of birds, as they try to adapt to global conditions.

The increase in heat waves also proves to be dangerous to young birds still in their nesting period.

Predation on ospreys is fortunately not very common. In North America, bald eagles, golden eagles, and great horned owls are the most common predators of both adult ospreys and their young.

Threats to eggs and young ospreys by smaller birds or raccoons are typically only in occurrence if human activity disturbs the parents or prevents access to the nest.

More common than predation is the threat of kleptoparasitism, typically by bald eagles. This occurs when a larger hawk steals the prey away from the osprey.

Certain harmful parasites, such as trematodes, have also been known to be common in ospreys. 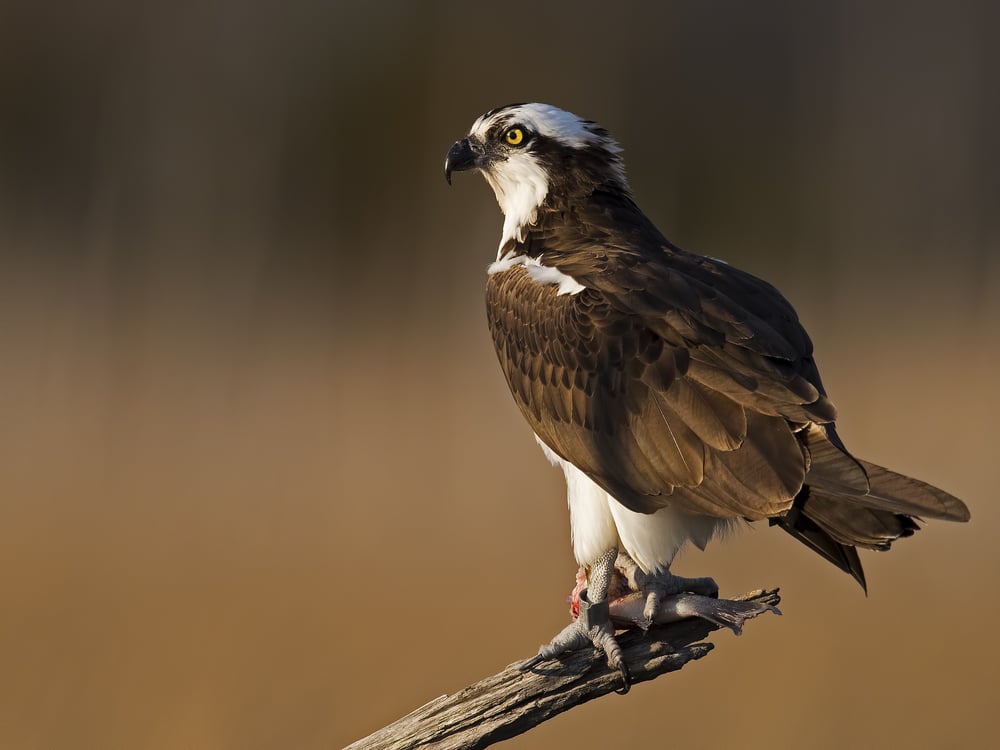 Since the banning of DDT pesticides in the 1970s, there has been a resurgence in the osprey population recovery. There is an estimated 460,000 global population of individual ospreys. The species has been evaluated as Least Concern based on the population decline criterion of the International Union for Conservation of Nature (IUCN) Red List of Threatened Species.

The osprey long-life expectancy has allowed the species to survive through harsh conditions, particularly during the immersion of high DDT toxicity levels. While this hindered breeding productivity, it did not affect the raptor’s adaptability.

Fun Facts About the Osprey